Who needs chicken soup when you can have a strong cocktail that tastes like chicken?

Sure, it’s winter in LA. Christmas lights are twinkling. Ornaments are settling into their new temporary tree houses. The temperature has even been dropping below 50. But don't get too comfortable, Los Angeles. Mother Nature could strike and hit us with a 100 degree scorcher when we're least expecting it. Luckily, our bars know just how to transport us to a winter wonderland no matter the weather. Check out some of the best holiday cocktails in town, plus a few words from their creators.
Get Citizine Updates Here

Highland Park, $16
Traditional eggnog, but with dark beer and whipped
Nicholas Krok (Bar Manager): In terms of ingredients, the only thing we're really doing different here is adding dark beer, making it almost like an eggnog shandy (we're nog-gonna mess too much with a classic so tried and true). The most unique part of this eggnog is the process itself. While most folks just throw everything together and blend it, Rahul Khopkar & I developed a top secret blending process to ensure the most enjoyable eggnog in terms of texture and flavor balance. It's light and airy while keeping a full flavor and creamy texture. 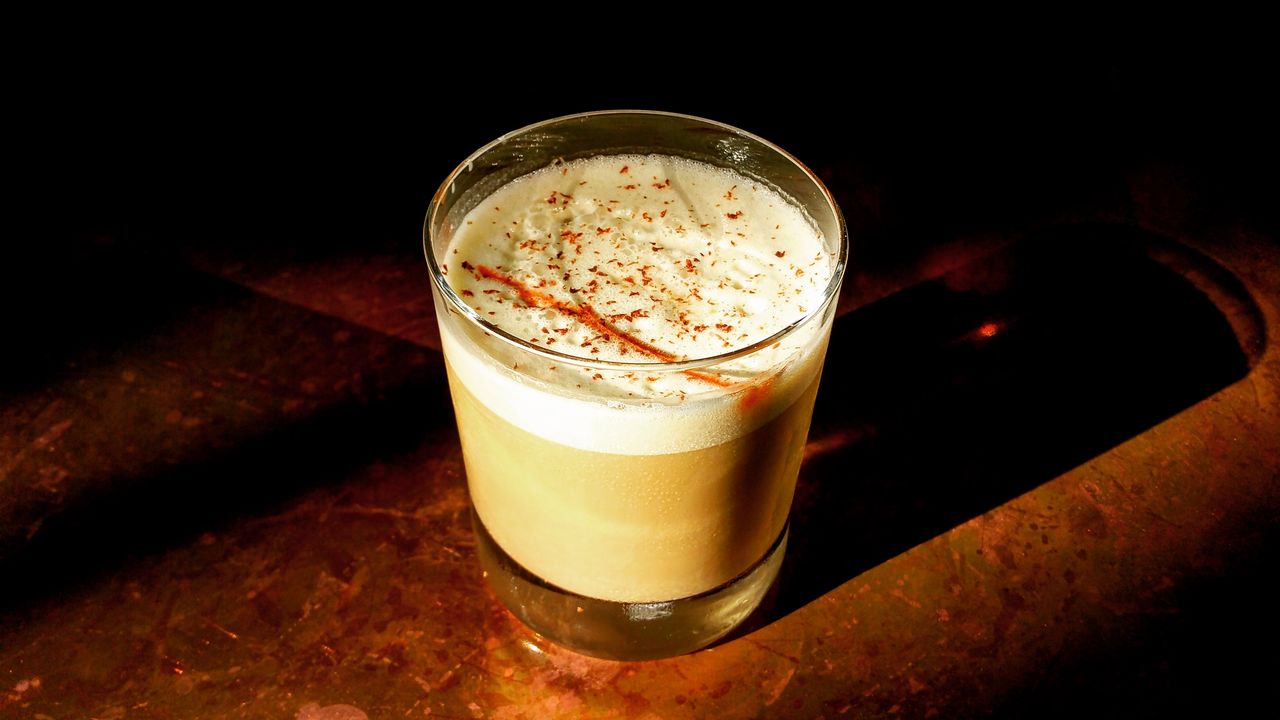 Downtown, $14
Stolen Smoked Rum, Pernod Absinthe, Crème de Cacao, cream, and egg
Darwin Pornel (Lead Bartender): The holidays always call for drinks that are rich and decadent, so for this season, an eggnog was the best choice.  Rum is one of my favorite spirits to work with, and we always love to highlight absinthe in one of the cocktails here at Faith & Flower. The pairing of the spiced rum, absinthe, and  creme de cacao is a delicious take on the classic absinthe and dark chocolate combo. 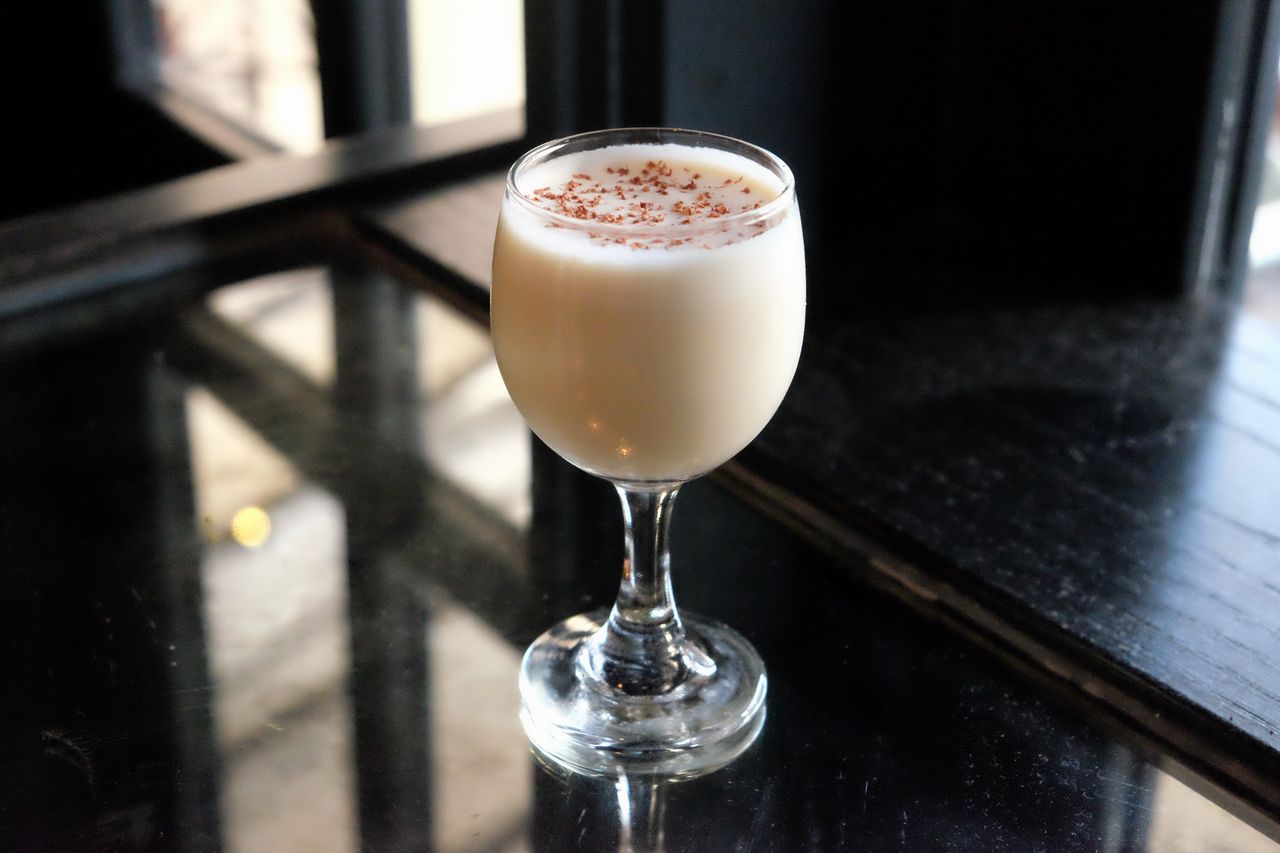 Downtown, $14
Bourbon, Liquid Alchemist apple spice, lemon juice, orange bitters, and soda water
Evan Charest (Patina Group Mixologist): Inspiration came from my favorite holiday food: Apple pie (And when I say my favorite holiday food, I mean it as in I could eat apple pie in place of lunch and dinner). Fresh apple and baking spices made into a syrup plus fresh lemon and Applejack whiskey is the ultimate winter cocktail. We add a little orange bitters as well to round out the flavor. 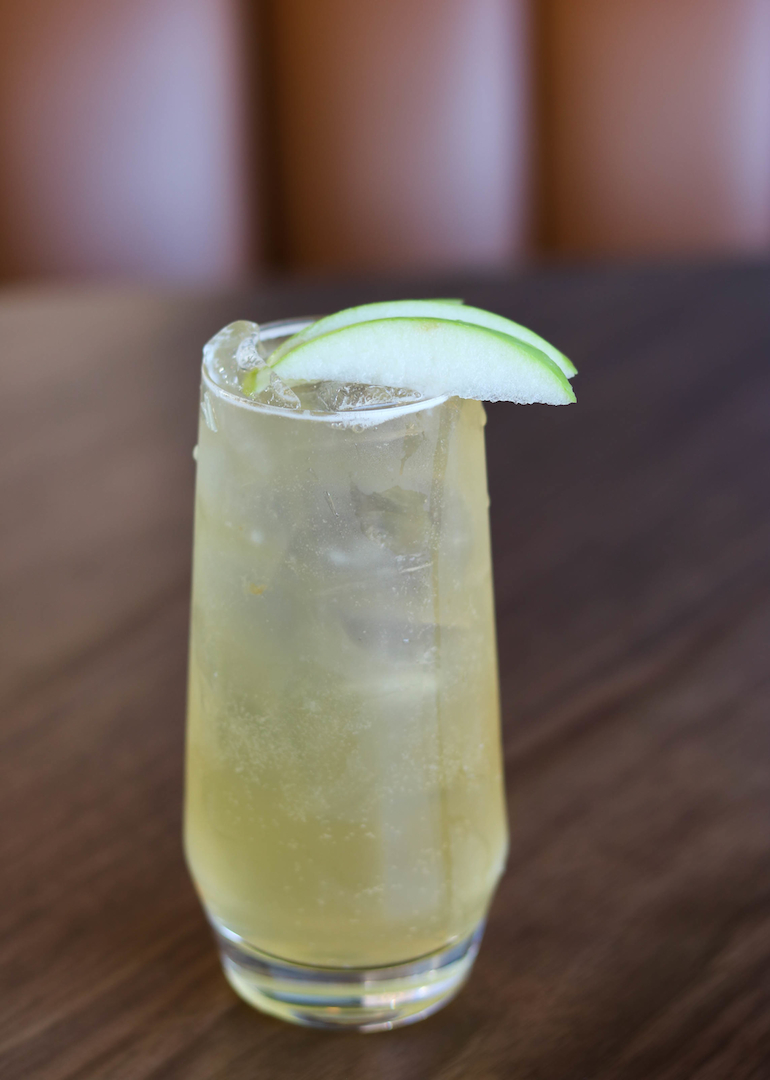 Arts District, $16
Bone marrow-infused bourbon, averna, walnut and angostura bitters, orange peel
Jesse Penwarden (General Manager):  My goal was to incorporate a savory cocktail onto the list that was straight forward and comforting. Italian cooking is simple and uses fine ingredients and I wanted the Gentleman's Breakfast to reflect that. It's basically a play on an Old Fashioned which fits right in with the brick buildings and exposed beams of the Arts District. A perfect companion to help take the edge off after a long day at work. 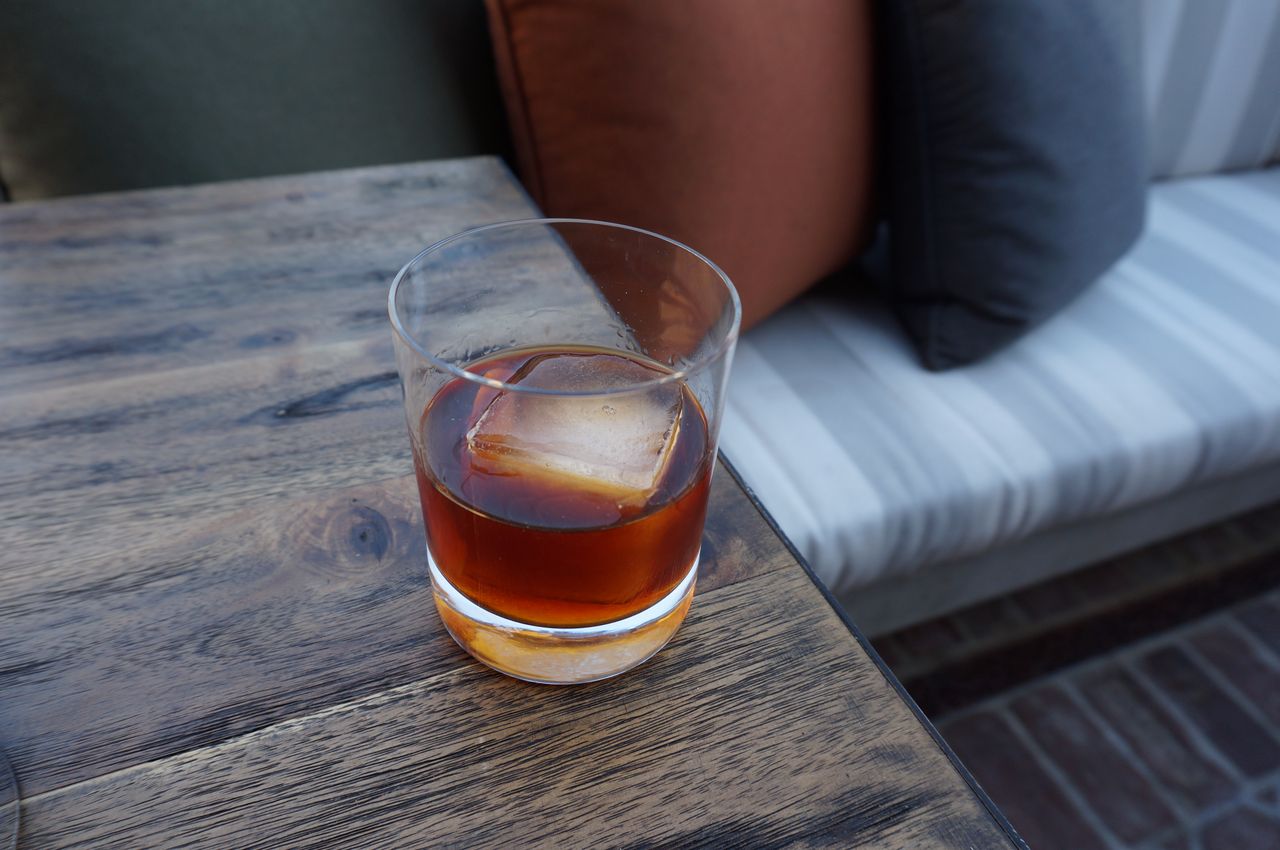 Hollywood, $15
Apple-infused Brennivin (Icelandic aquavit), yuzu honey, fresh lemon, served hot and garnished with mint, orange and lemon twist, shaved parsnip, and fresh cinnamon and nutmeg
Kim Stodel (Bar Manager): I thought apples and caraway would pair nicely with Brennivin, the traditional Icelandic spirit, so I did an apple infusion which gave it a really great aroma and texture. I wanted to do a take on the hot toddy by adding hot water, lemon, yuzu honey and all the aromatic garnishes, which make for a really warming, comforting and unique drink.  The name of the cocktail is a play on words and comes from the last name (Adelstein) of one of our great cooks in the kitchen. One day, while I was developing the cocktail I gave him a sample to taste. As it turns out, he wasn’t feeling well, but the cocktail made him feel better (as a good hot toddy should!), so I decided to honor him this way. He’s also the only person I know who’s of Icelandic descent! 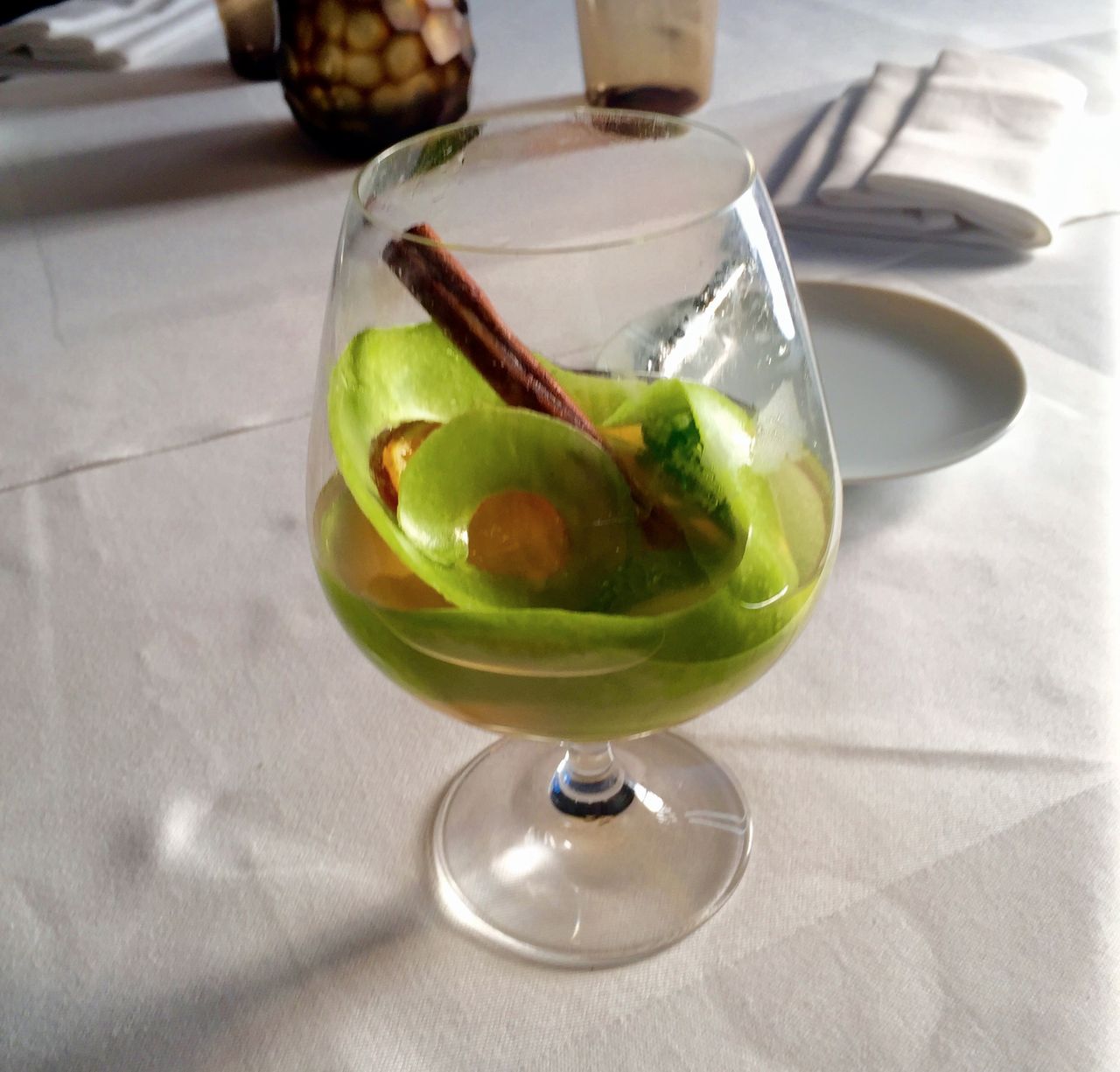 Drunk Chicken at The Church Key

West Hollywood, $12
Bourbon, ginger, honey, rosemary, egg white
Tatiana Brunetti (Owner): “Creativity is in The Church Key’s DNA. This cocktail is inspired by the dish “Drunk Chicken” in which the chicken is marinated in alcohol – including beer, rice wine, grape wine – before being cooked. Our spin on it is a fun play that includes an egg white, to tie back to the origin of the name, herbaceous rosemary, ginger, honey, and of course bourbon. But beware! If you drink too many of these, you become a drunk chicken!” 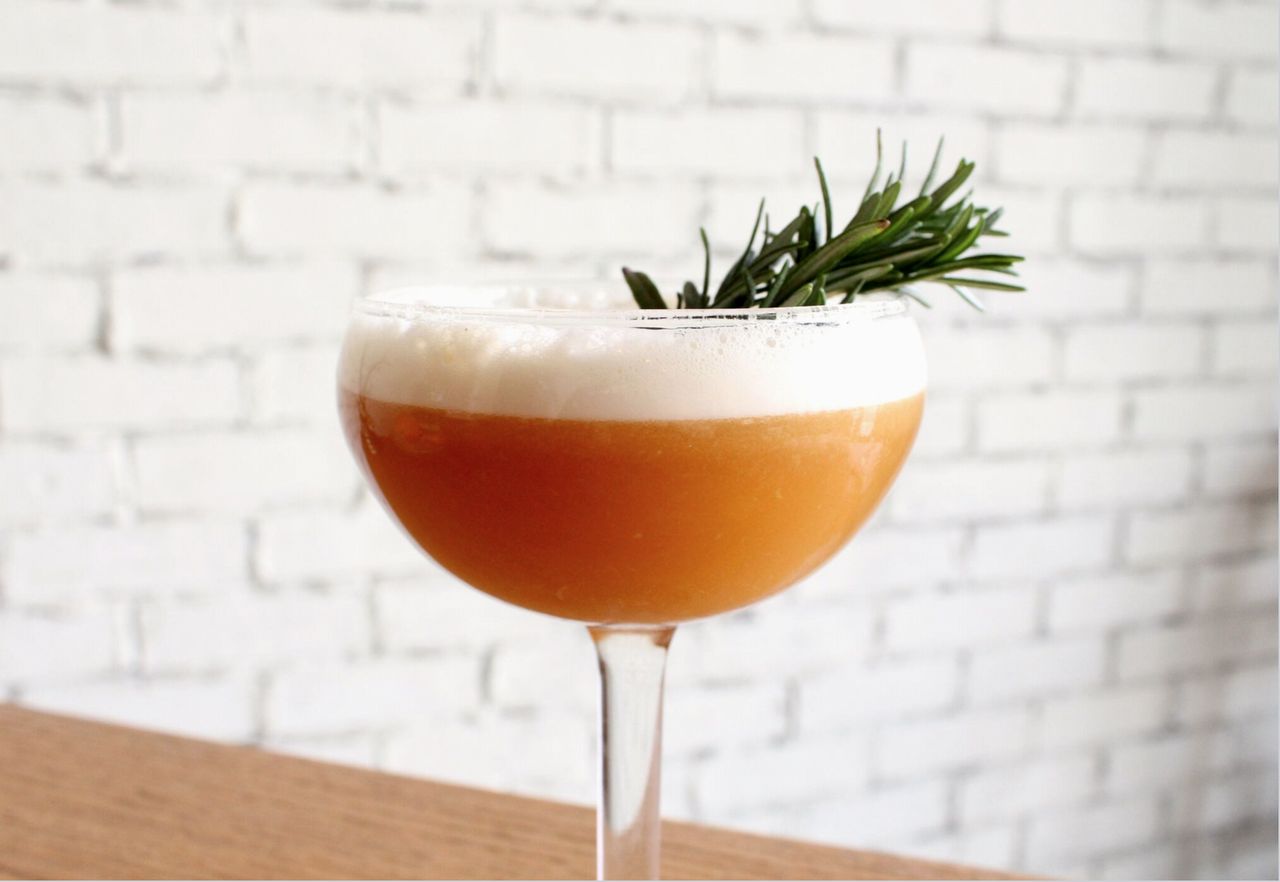 Downtown, $17
Cazadores Tequila, pilloncillo, persimmons, cranberries, apples
Dee Quinones (Bar Manager): As far as poncho is concerned, apparently it is a traditional cold weather punch from Mexico. I put my own spin on it inspired by a dish I had in Colombia which was a dessert called Higos en pilloncillo. It’s figs cooked in pilloncillo sugar (a common South American offering) with crumbled queso fresco. For my poncho I also added cranberries to make it a little more festive and add some acidity. 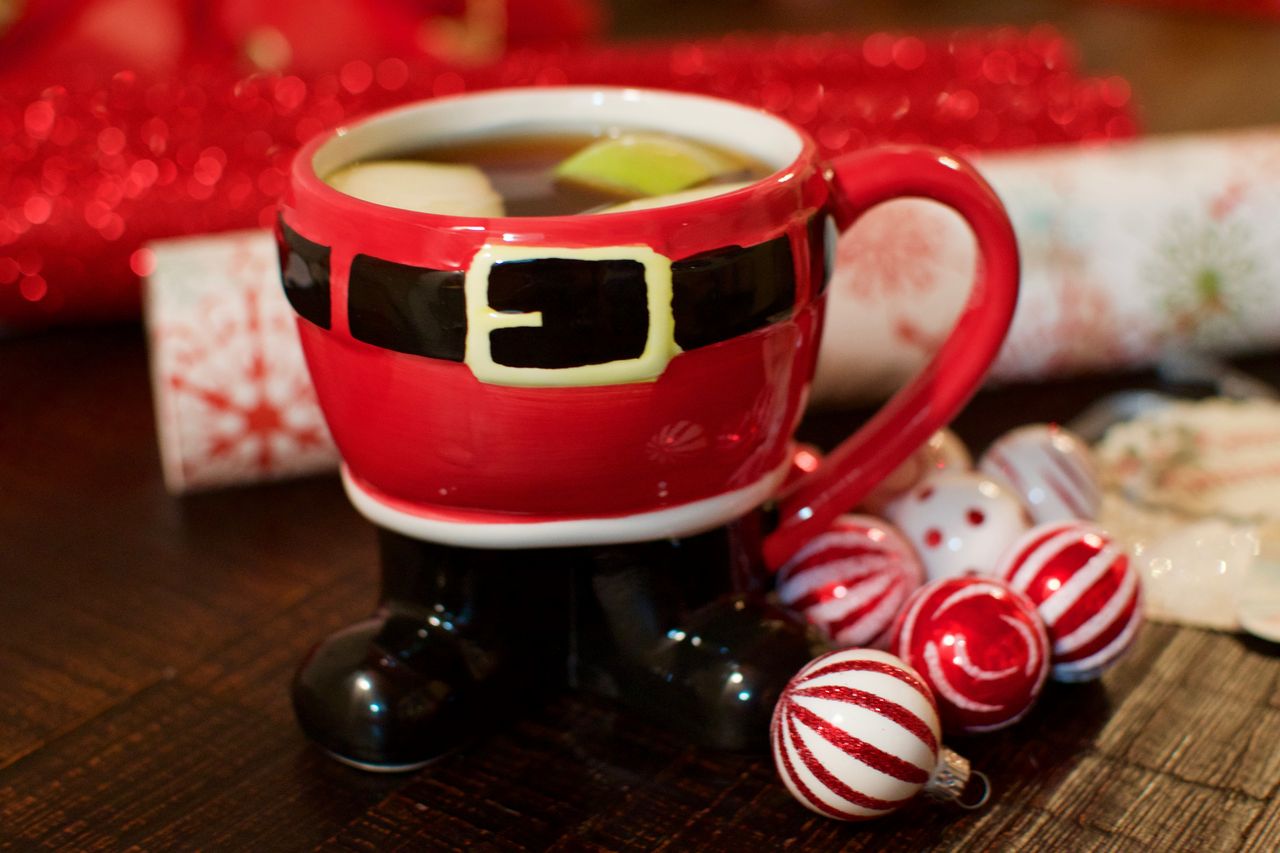 Santa Monica, $14
Egg nog, Dekuyper Amaretto, Hennessy VS, nutmeg, cinnamon
Andrew Ha (Bar Manager): Cognac is usually a celebratory liquor of choice in the Asian culture, so I wanted to incorporate it into a holiday cocktail using festive ingredients such as eggnog and cinnamon. 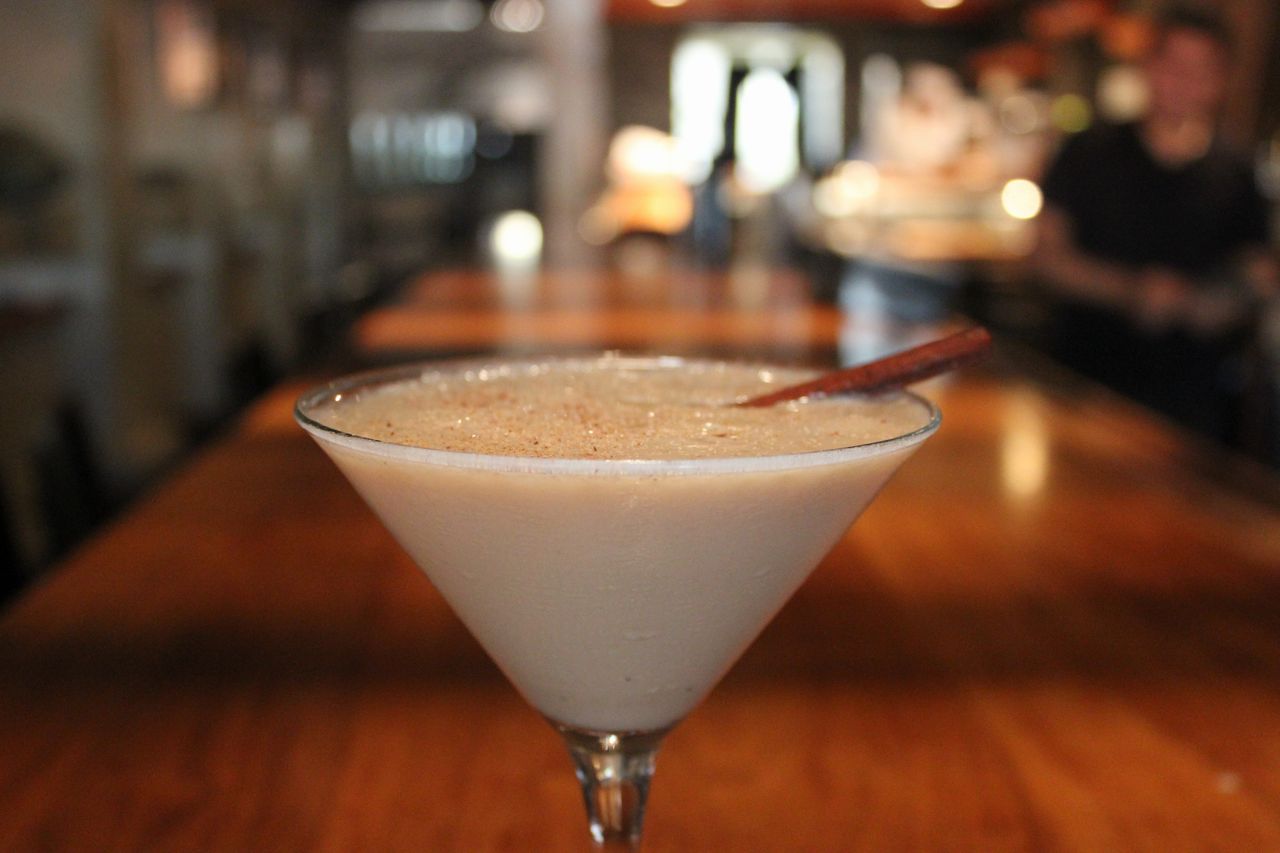 Beverly Grove, $18
Bermuda rum, amaro lucano, cherry liqueur, chocolate bitter
Matt Asador (Bar Manager): My inspiration was to use Italian liquors combined with chocolate—this one specifically as an after-meal digestivo. The key ingredient is chocolate, combining the taste and aroma to make a perfect digestivo cocktail, topped off with bitters. 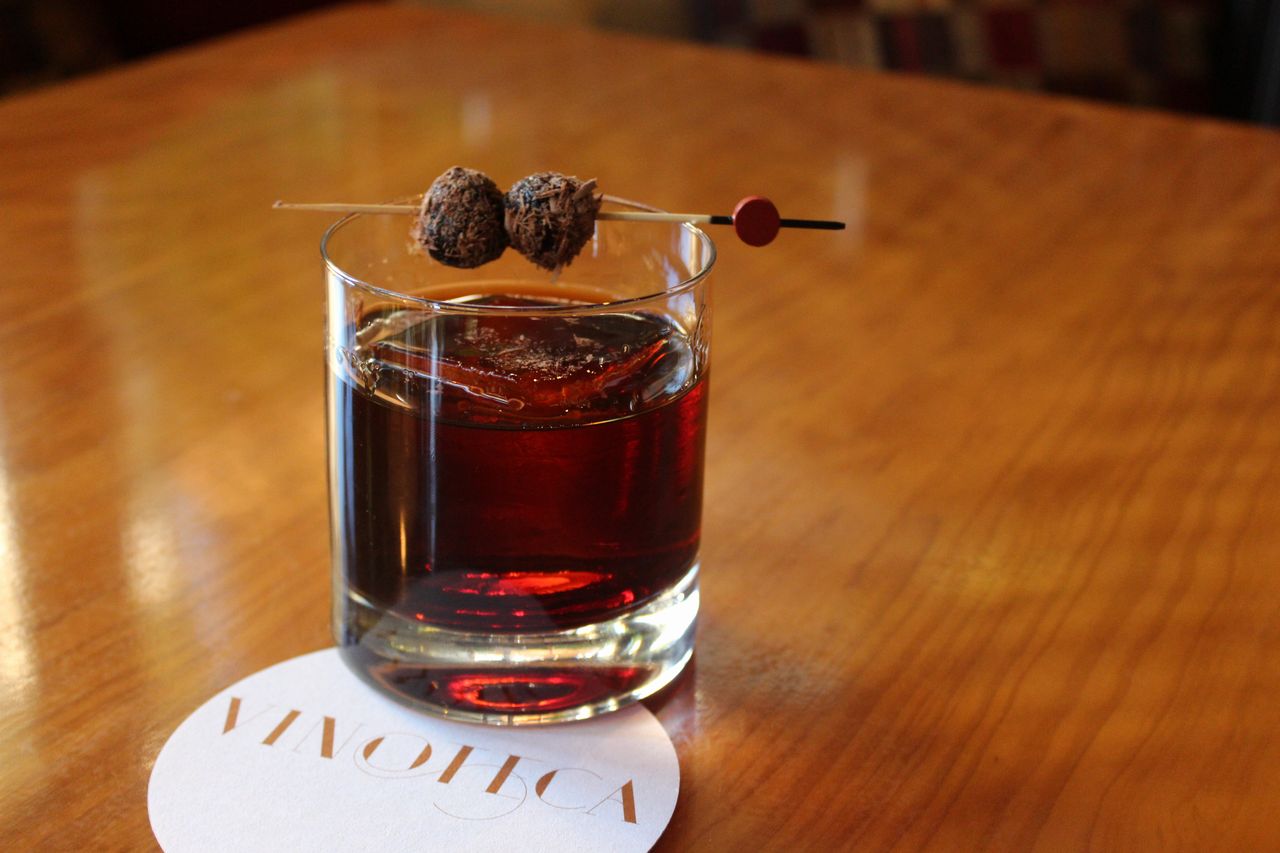 West Hollywood, $15
Effen Black Cherry Vodka, lemon, St. Germain Elderflower Liqueur, Laphroaig 10-year Scotch, fresh cherries, bitters, egg white
Brandyn Tepper (LA Cocktail Academy): Black Gold is a take on the classic Gin Sour known as the Clover Club. Instead of fresh raspberries like the original calls for, we use fresh muddled cherries, which are only further enhanced by the Effen Black Cherry Vodka. Black Gold references the nickname for oil, which is what made the Doheny fortune possible. 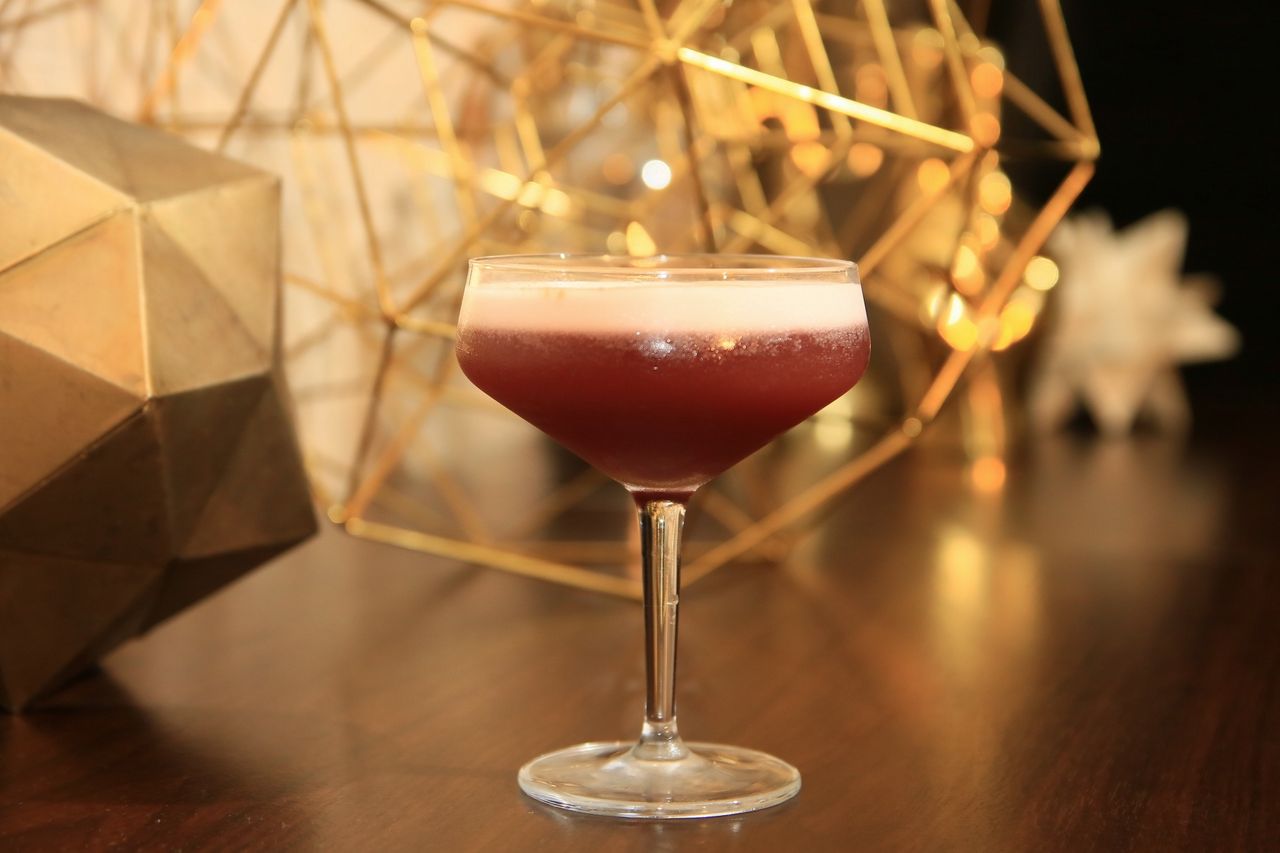 Under the Mistletoe at Michael's Restaurant

Santa Monica, $14
Tamarillo infused Ketel One, Allspice Dram, fresh lime, egg white, and a spritz of porcini mushroom vinegar
Meredith Hayman (Bar Manager): The 'Under the Mistletoe' has tamarillo (tree tomato)-infused Ketel One, fresh lime, honey, egg white, soda, Allspice Dram (which has delicious baking flavors) and a spritz of porcini mushroom vinegar. The cocktail is earthy and has deep umami flavors, but also has this beautiful reddish hue to it, just like the color of a mistletoe berries — which was sort of my inspiration. Sipping this drink just feels like drinking in the holidays! 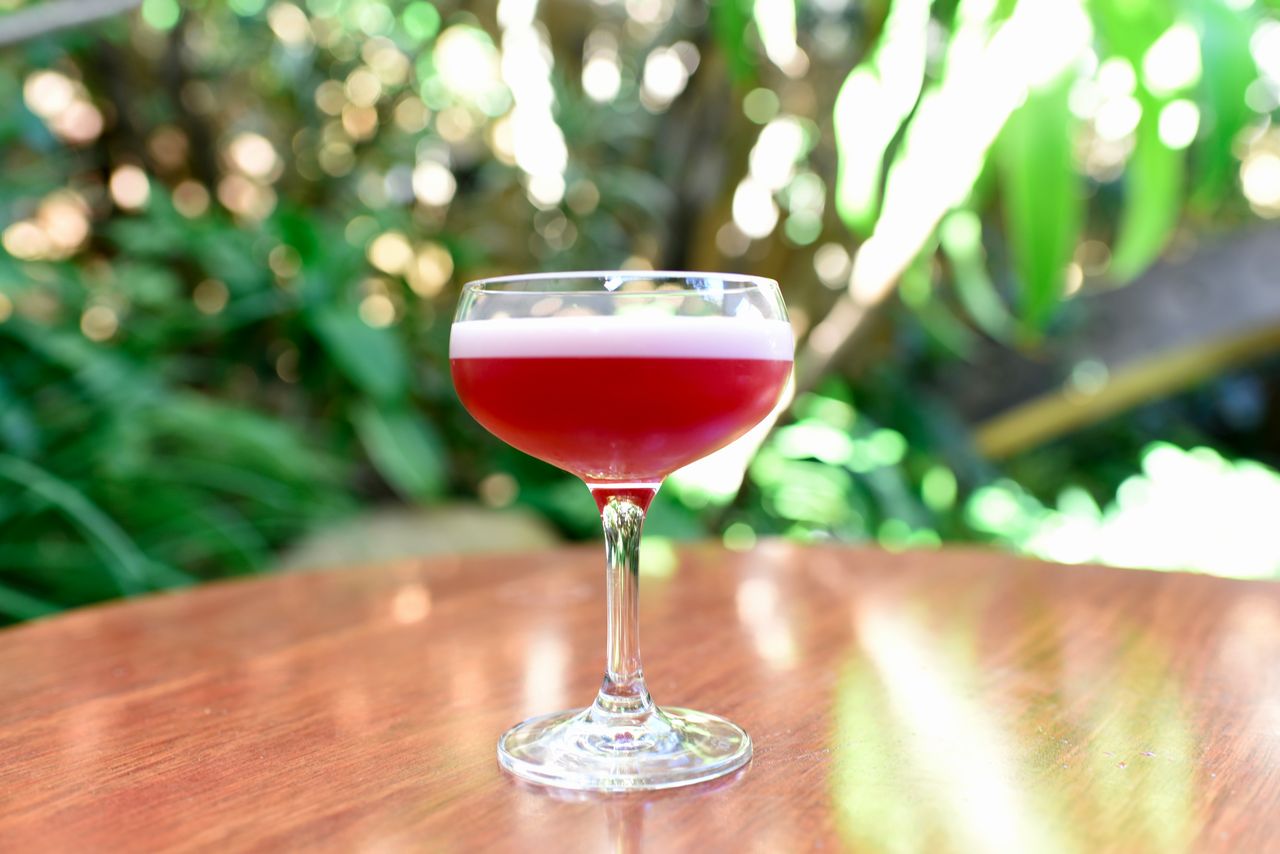 Under the Mistletoe courtesy of Michael's

West Hollywood, $15
Vodka, cold-pressed greens, elderflower, lemon
Adam Nystrom (Beverage Director):  Everything in this drink is about providing a counterpoint to all the decadence the Holiday season brings. Once you've indulged in the rich, warming dishes and drinks that come around this time of year, come back around to something rejuvenating. Cold pressed kale, parsley, celery and apple with pea shoots all wrapped up with a cucumber ribbon. A little vodka and elderflower liqueur and you've got our detox:retox. 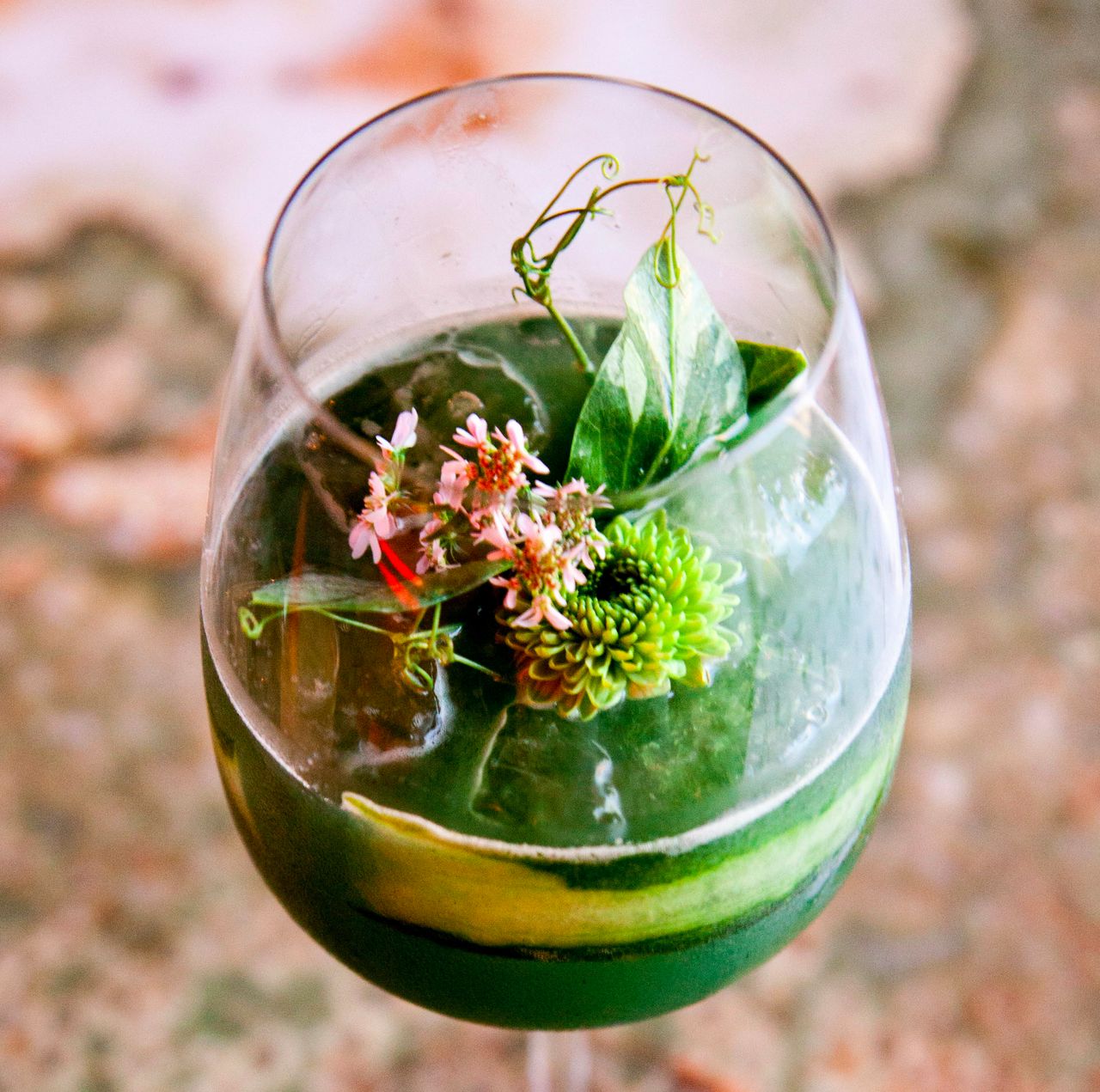 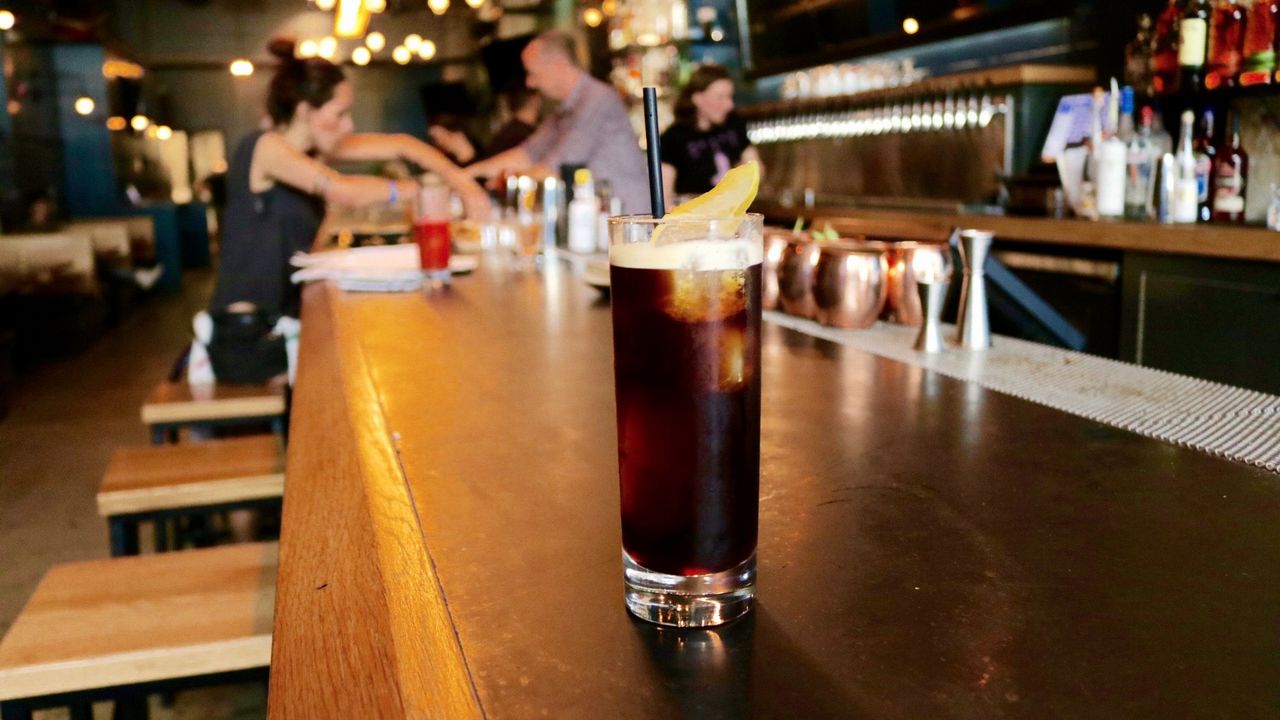 Little Tokyo, $14
Butter Washed Appleton Estate Rum, House spiced pear syrup, Frangelico, Averna
Matt Bostick (Beverage Director):  As we dip down into the cool 60's, AKA winter in LA, we thought it would be best to spark the holiday feels with a Hot buttered rum cocktail. It might not feel like Christmas outside, but one taste of this drink will get you into the holiday mood! 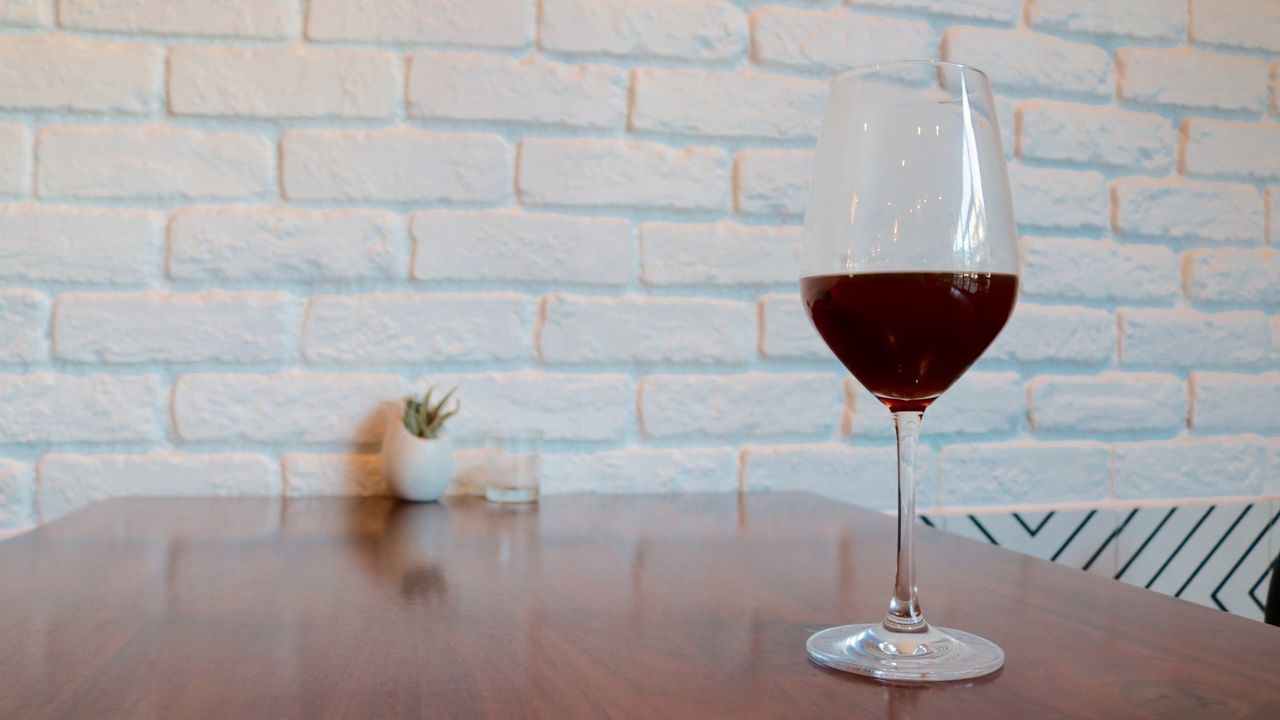 Zero Ducks Given at The Wallace

Culver City, $14
Apple brandy, duck fat washed orange liqueur, Averna, forbidden bitters
Greg Bryson (Beverage Director):  Zero Ducks Given came about when my team and I set out to create a fall flavored Manhattan. Being in a restaurant like ours, we have access to a lot of cool ingredients like pig heads, duck fat, avocado mousse, etc. Most of our drinks start with an idea or an ingredient and then we just keep drinking variations until we finalize something!
+++++++++++++++++++++++++++++++++++++++++++++++++++++++++++++++++++++
Wilder Shaw is a writer, comedian, and sandwich eater. There’s usually food in his mouth. Stalk him on Instagram at @wildershaw and Twitter at @WilderShaw_.
Featured image courtesy of Westbound