Not quite the Westside and definitely not East LA, Mid-City was long known as the part of town where you swear like a sailor in search for non-permit parking off the Miracle Mile. But then, someone got the bright idea that this central neighborhood, with its quiet, hilly streets filled with historic homes and surprising views of the basin, could be pretty damn sweet with a careful dash of gentrification.
And surprise, surprise! Like any other part of Los Angeles with (formerly) cheap rent, Mid-City is now booming. These days, hipster stroller-Moms battle with Latino fruit cart vendors for sidewalk space and high-end coffee shops have moved in next to storefront churches and used tire stores. Yes, we can squabble about the merits and detriments of gentrification, but it’s safe to say that the newly revamped Mid-City now has a unique charm of its own. Even though parking still sucks, you gotta check out these places to eat, play and stay in Mid-City, LA.
Get Citizine Updates Here

Roscoe’s House of Chicken and Waffles

Everyone knows that Roscoe’s Chicken and Waffles is a must-do when in LA. We know it, President Obama knows it and Snoop Dogg/Lion knows it. Famous for its hearty portions of, you guessed it, fried chicken and waffles, Roscoe's serves up a big ol’ plate of both that sets you back less than $15.
Pro-tip: If you eat here before going out, you’ll never catch a buzz. Source: this writer, wondering why he couldn’t get drunk that one night. 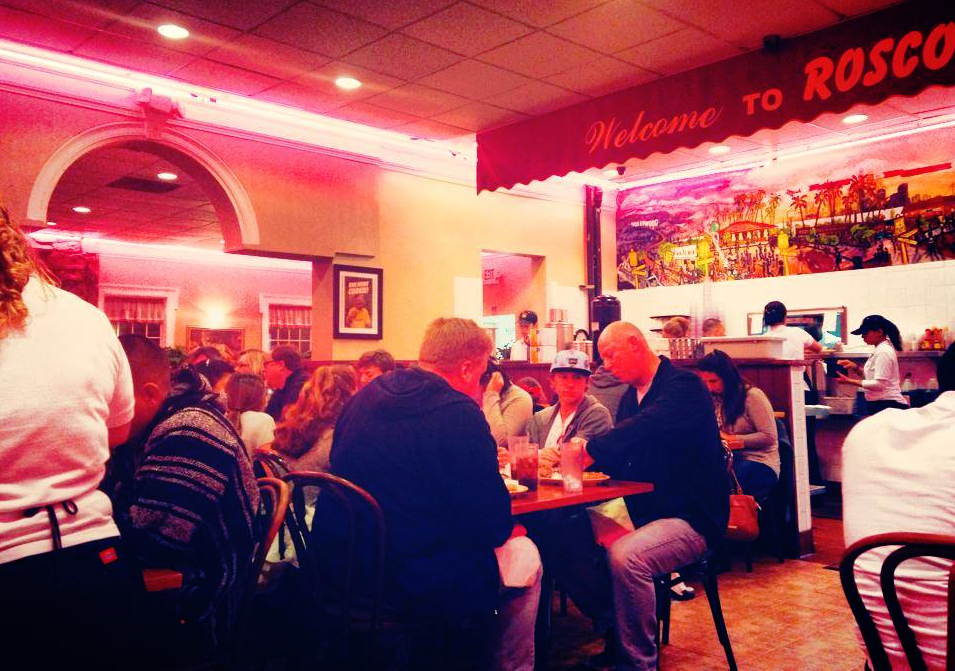 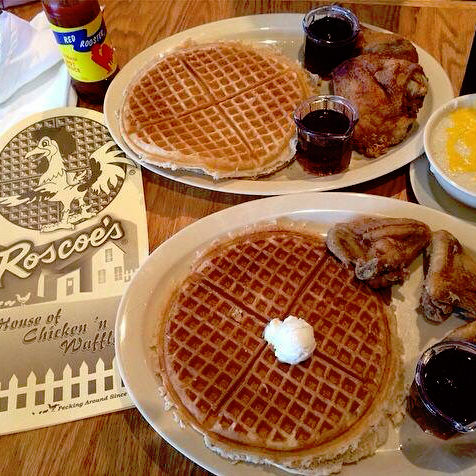 Scarf down a plate like this and your hangover will go poof!

Images courtesy of Roscoe’s House of Chicken and Waffles 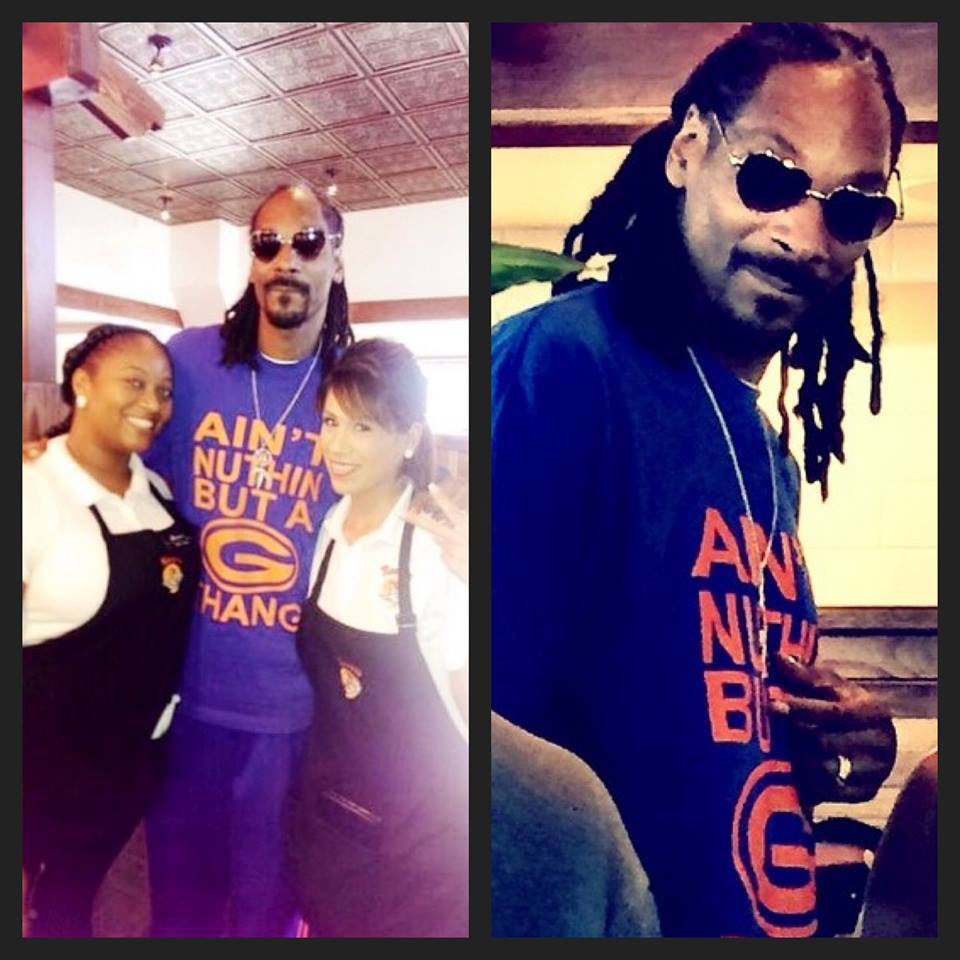 Southern comfort food seems to be a theme in Mid-City, and on the other end of the spectrum from Roscoe’s is My Two Cents. M2C serves up fried chicken too, though their version is a bit more “rustic chic"—AKA you can order it gluten-free. Head chef and native Angeleno Alisa Reynolds was raised by parents who grew up in the South, and boy, does it show. She serves up Southern dishes with a twist, like mango cheesecake, oxtail tacos and turkey meatloaf burgers.
Pro-tip: On Sundays, the restaurant dishes out a special dinner menu. The turkey cobbler is what it’s all about.

A small Louisiana meets Mexico taco joint, Sky's Gourmet Tacos offers something that all those taco trucks in Mid-City don’t: lobster. It’s the star of the menu in both taco and burrito form. The huge lobster burrito boasts a full half-pound of the sea’s most glorified crustacean.
Pro-tip: The menu online isn’t up to date and prices tend to change. You might want to call ahead so you know what you’re getting yourself into.

If you need a little extra pep after all that Southern comfort food, Paper or Plastik has you covered. Morning patrons can enjoy strong coffee from roasters like Intelligentsia accompanied by tasty pastries. But more than just a grab ‘n go cafe, PoP's has some serious dinner offerings worth popping in for. Try out the grass-fed burger, butternut squash burrata or—if you’re still in a brunch frame of mind, even late in the day—avocado toast.
Pro-tip: If you’re drinking, PoP has a great beer selection and cocktails starting at an almost unheard of $6. 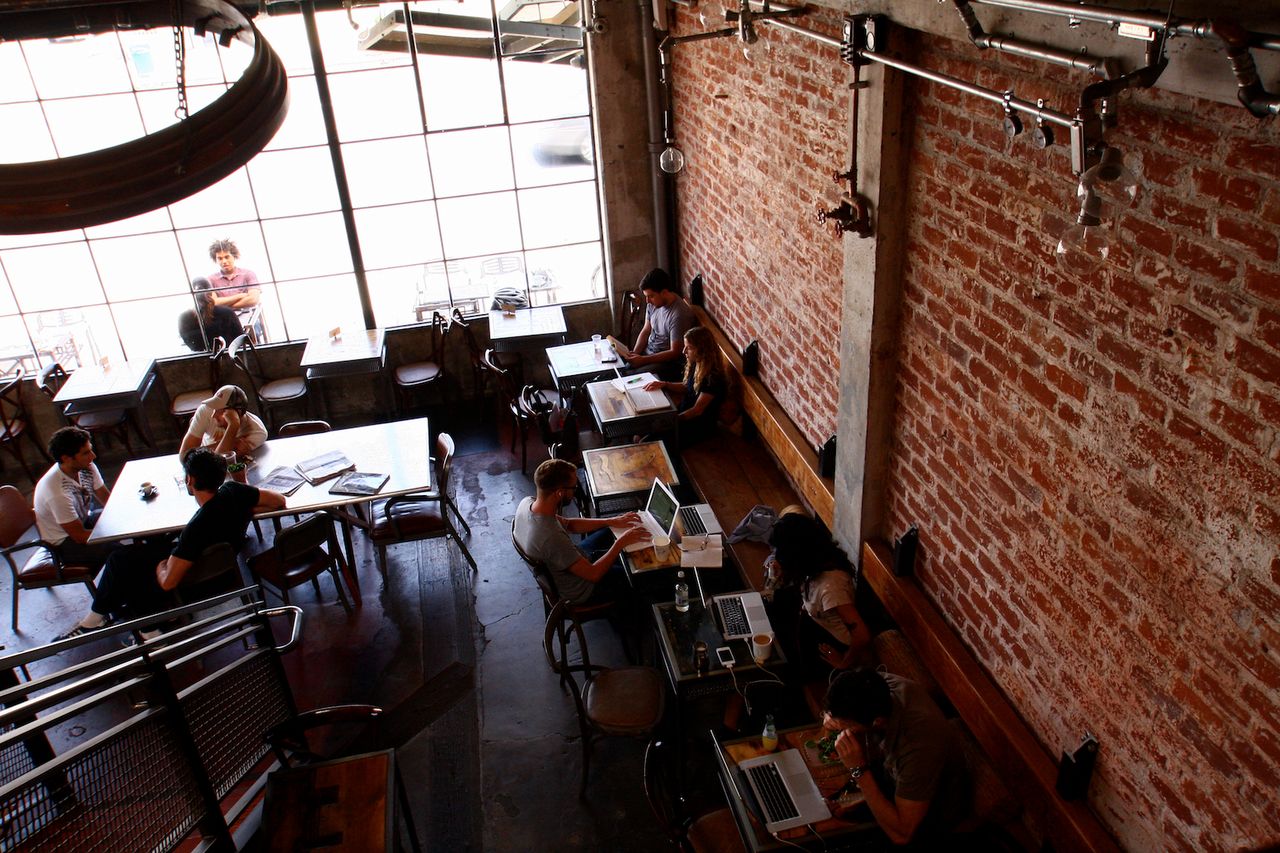 Paper or Plastik is a great spot to get work done, but be warned: there are strictly designated tables for laptop users. Talk to each other, people!

Image courtesy of Paper or Plastik

Arts-centric though completely unpretentious, Rascal sits on the east end of Mid-City and deserves the crown for best local neighborhood bar and pub grub. Rascal is owned by a husband and wife team, which makes sense when considering the welcoming vibe. Loyal locals have been returning for years for housemade sandwiches like the grilled cheese, burger, gyro and plenty more.
Pro-tip: Weekday happy hour is from 5 to 7 p.m., and all night Mondays.

One of those landmark Los Angeles venues you’ve likely never heard of, The Mint has been going strong since 1937. Back in the day, famous names like Ray Charles, Natalie Cole and Stevie Wonder graced its stage. The space has a capacity of 500 at the most, and still feels intimate. There’s a full food menu here, but let’s face it, you’re here for the music, not the sliders.
Pro-tip: If you live in Mint's zip code, the bar offers special $5 passes to select shows. Keep an eye on the calendar. 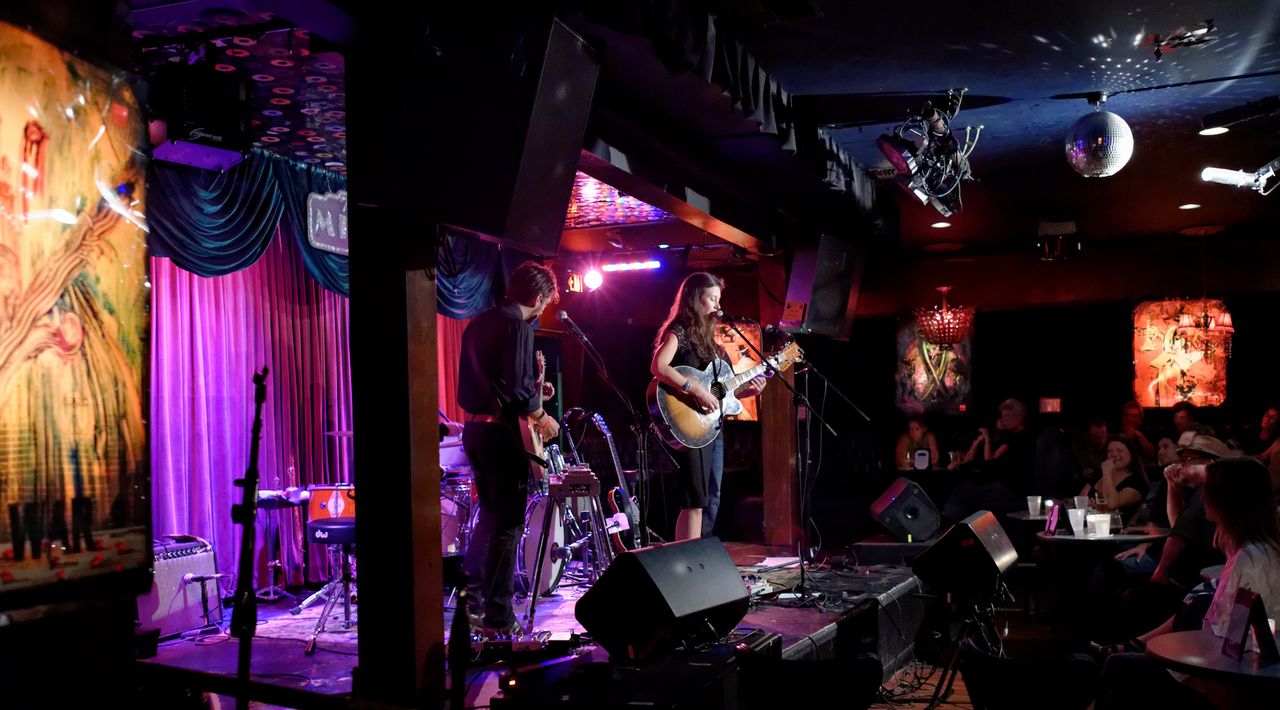 Live music and attentive bartenders ... what more do you need?

You might consider yourself a nerd because you can hold your own in a conversation about the Marvel cinematic universe, but you’ve got nothing on the geek culture at Whimsic Alley. A play on Harry Potter’s Diagon Alley, the shop is really whimsical and filled to bursting-point with costumes, toys and figurines for most every fandom one can think of, from Game of Thrones to Doctor Who. If you pop in, check out the event room, modeled after Hogwarts’ Great Hall. If anyone asks, be sure to lie and tell them: No, you were not just sorted into Hufflepuff.
Pro-tip: Keep an eye on Whimsic Alley’s Facebook for great events sure to unimpress on your next first date, like the Downton Abbey Tea Party, or the Geeks in Love Craft Faire.

You might know LACMA from such places as, oh, you know, EVERY Instagram account ever. Chris Burden’s Urban Light, installation, comprised of rows of streetlights, has been the setting for countless selfies, Snapchats and profile pictures since the dawn of time. Selfie-shaming aside, the museum and its permanent installations itself are part of the draw here, like the outdoor steel staircases with killer views, giant glass elevators and the iconic ‘Levitated Mass,’ a 340-ton boulder suspended over a walkway in the rear courtyard. Rotating exhibits like the Rain Room reinforce the idea prevalent throughout the museum: that art is to be experienced interactively. This is not just a stuffy, traditional museum where art simply hangs on walls—though LACMA has that too, and it’s no less awesome.
Pro-tip: General admission gets you in, but some exhibits cost a little extra. Do your research online before having your heart broken. Some exhibits are booked months in advance. 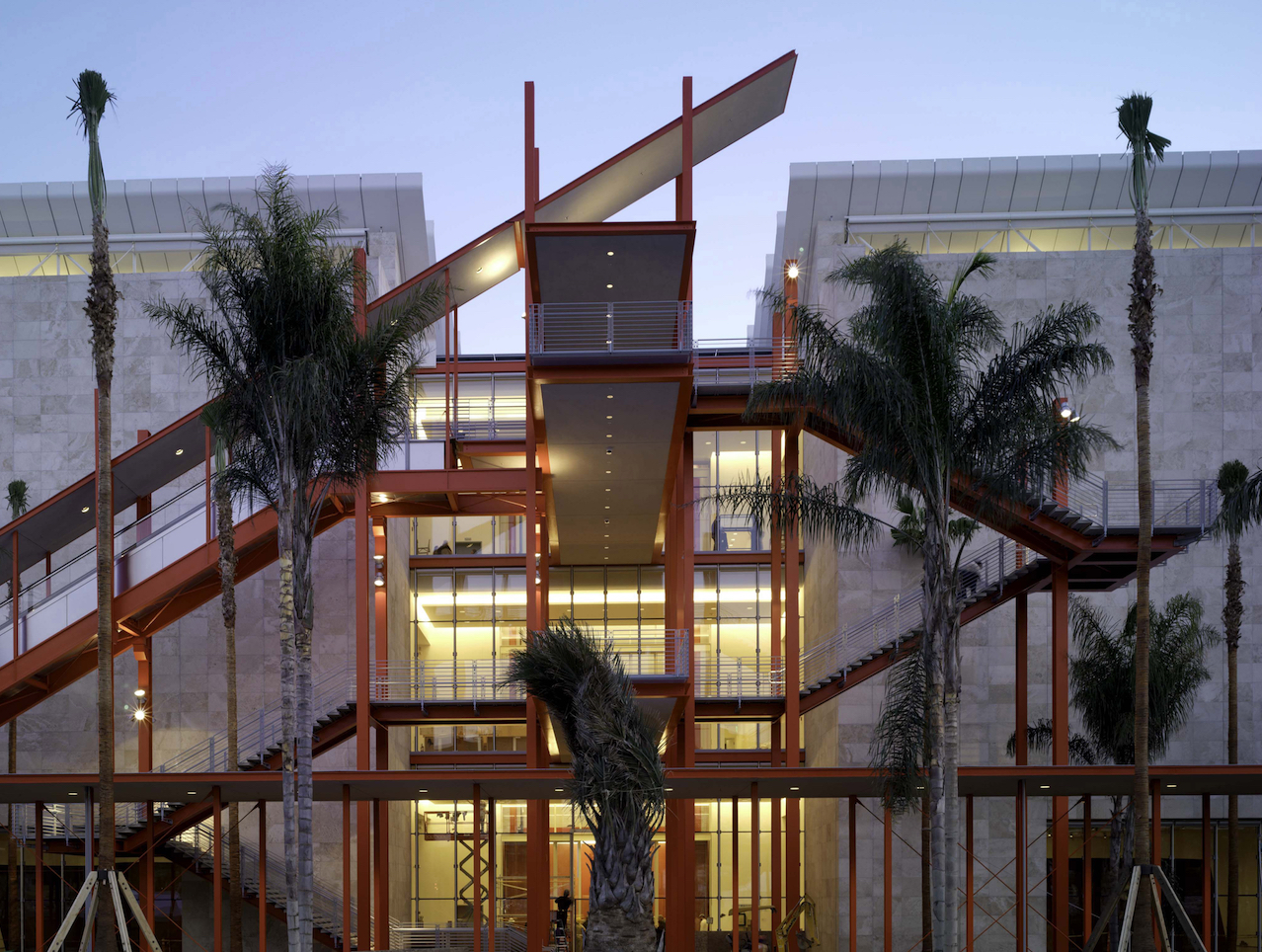 Take in views of the Hollywood Hills from LACMA's observation deck on the Broad contemporary Art Museum's third floor. 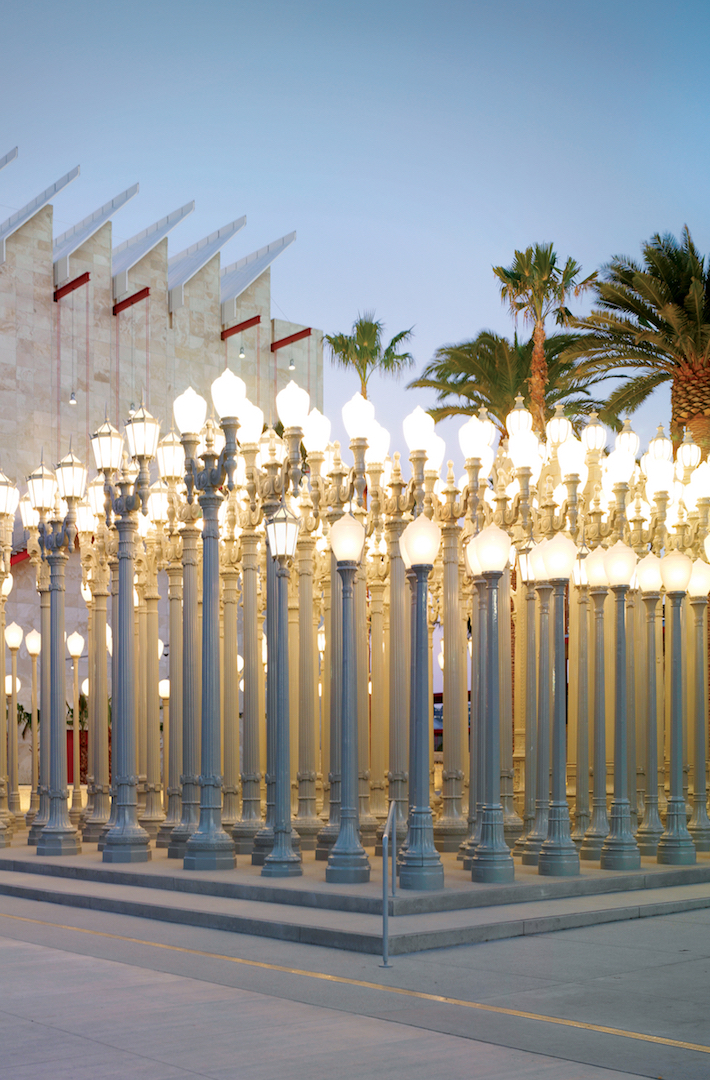 Go ahead and be basic—snap a selfie at Urban Light. 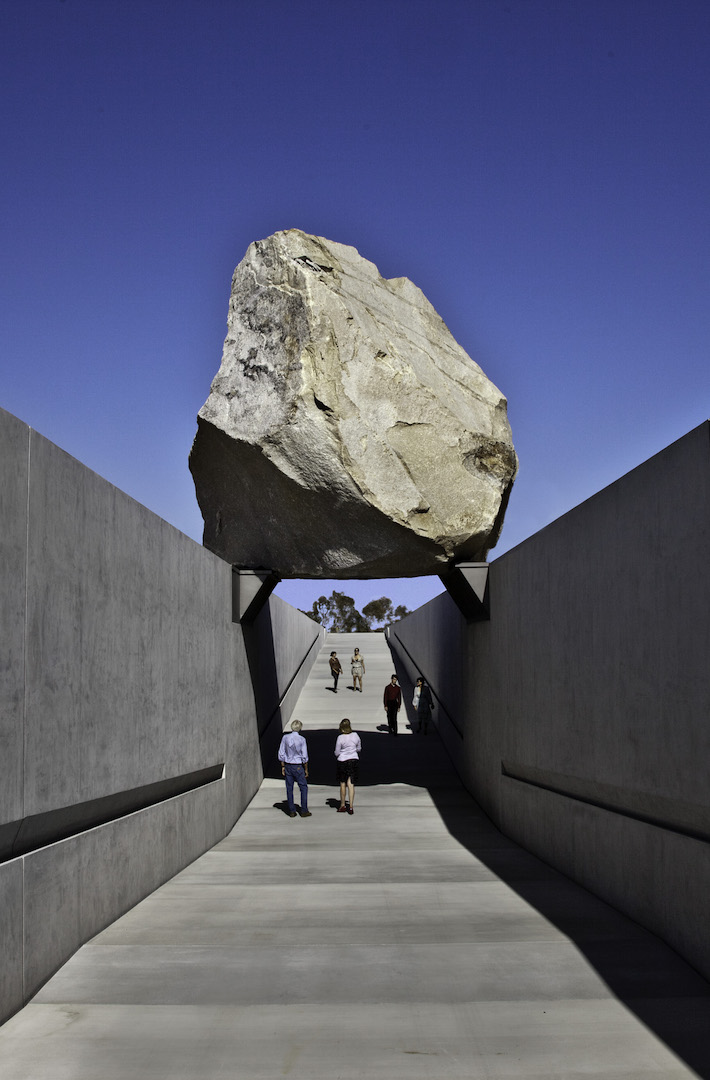 Earth-shattering art installation or just a big rock? You decide.

Just across Mid-City's western border is the cute-as-a-button boutique hotel Farmer's Daughter. The hotel itself has a playful vibe that’s unapologetically naughty: the “Knockin’ Boots” package offers panties with “Do It At the Daughter” printed across the back. How you define “it” is up to you, but the bottle of Champagne that comes with the room should help you figure it out. Need some fuel for all the fun? Inside Farmer’s Daughter is TART, helmed by James Beard trained local chef, Keith Shutta. Drawing on Southern influences as well as British pub fare, the menu offers chicken and black truffle dumplings, squash rings and banana and peanut butter Baked Alaska.
Pro-tip: If you jump in the pool with your clothes on after dinner, you get 50% off your entree. So, uh, cowabunga! 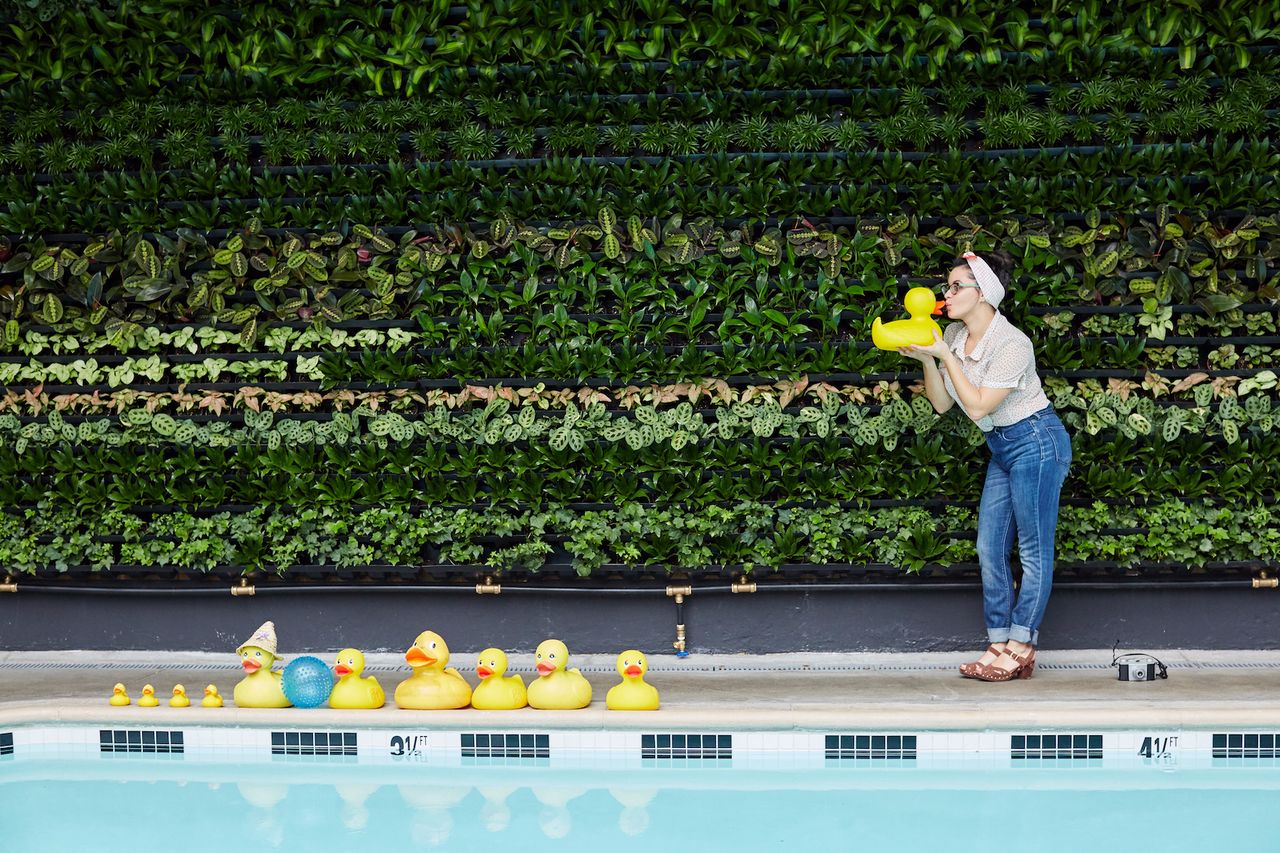 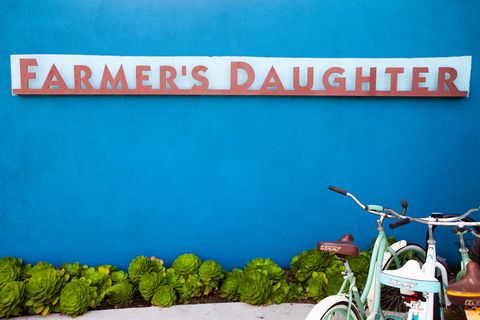 Even if you live in LA, boutique hotel Farmer's Daughter is worth a staycation. 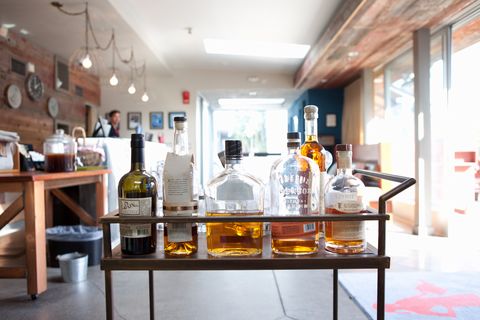 Especially when Whiskey Wednesday is on the calendar ...

The Hotel Wilshire is another one of LA’s great hotels worth the visit even if you’re not staying the night, but a reservation certainly wouldn’t hurt. Hotel guests are treated to a  wine happy hour each evening, and non-guests can head up to the rooftop deck. One of the premiere features of the hotel, the rooftop deck (and pool … and hot tub) offers amazing views extending from the Hollywood Hills to the ocean.
Pro-tip: The amenities here just don’t quit: join the rewards club for a $10 bar credit, access to complimentary emergency toiletries if you forgot to pack the toothpaste and—rewards member or not—a complimentary yoga mat in every room. 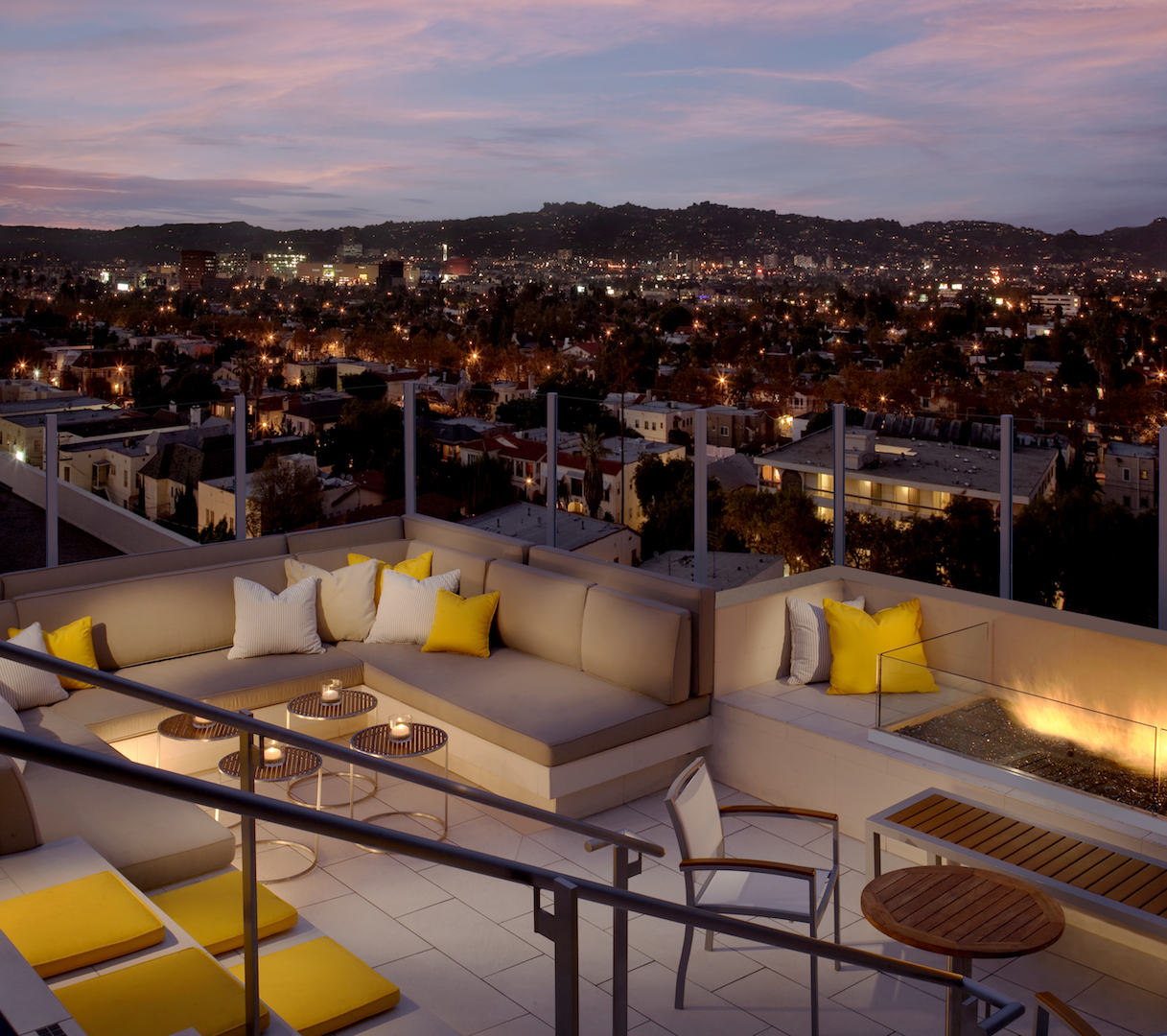 When you finally tire of E.P. & L.P., head to Hotel Wilshire for more LA rooftop shenanigans. 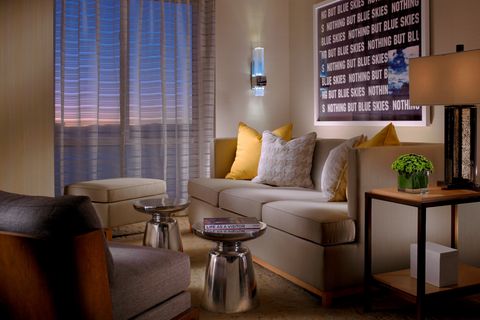 This baby comes with a complimentary yoga mat. Nam-a-stay the night. 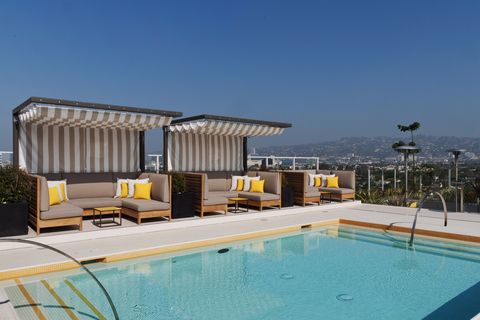 Take a dip with a view.

Bill Burman is a freelance television producer and writer. He lives under the delusion that running and hiking cancel out craft beer and tacos
Featured image courtesy of Paper or Plastik