Before Best Girl, Gray had been the culinary directory of Cape Seafood and Provisions and had spent time working in the kitchens of Trois Mec, Providence, and even the US Navy during his stint there. 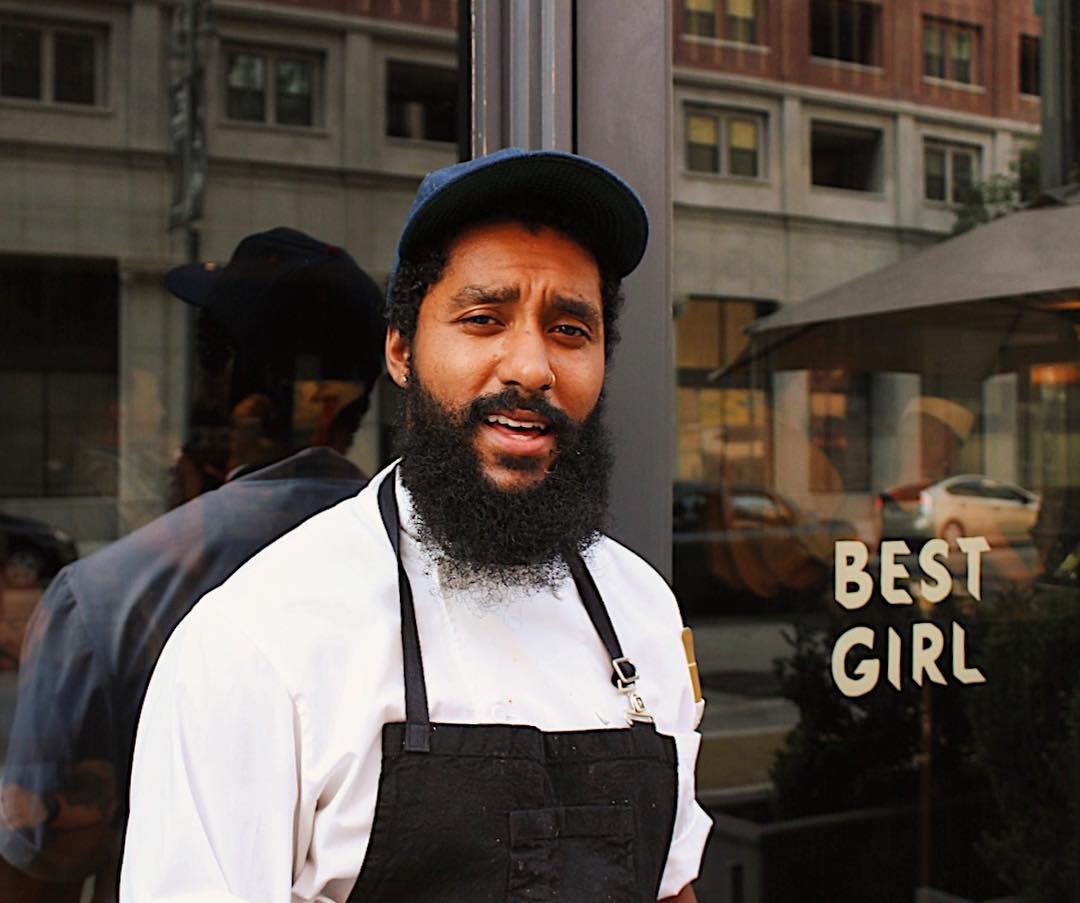 But, as serious as Gray's chops are in the kitchen, he doesn't spend all his time there.

In 2009, Gray started biking. “I think gas around that time was like $4.25, and I was going to Santa Monica College.” Gray tells Citizine. “I had classes there like five times a week and it was getting pretty pricey to drive to school. So I found an ad on Craigslist and bought my first bike. I then used that as my commuter for the most part throughout the week. Then I started riding a six-gear around 2012.”
With LA's nearly perfect year-round weather, the choice was obvious. Gray tells Citizine, “I love biking mostly when it’s great weather. But that’s the great thing about riding bikes: you can ride them in the rain, at night when it’s a bit cold, etc. But I do love riding [my bike] best late afternoon.”
And even with the intense physicality of cooking in a commerical kitchen, Gray still loves riding his bike to work. “Being in the kitchen is pretty stressful.” Gray concludes. “The heat, that type of environment, and riding a six-gear bike are sort of the same. You have no brakes, just one gear and sometimes you have to ride up a very steep hill. It’s always like that for me: the hard way’s the best way!"

We asked Gray what some of his favorite biking paths in the city are, and where he likes to bike to. Here's what he said: 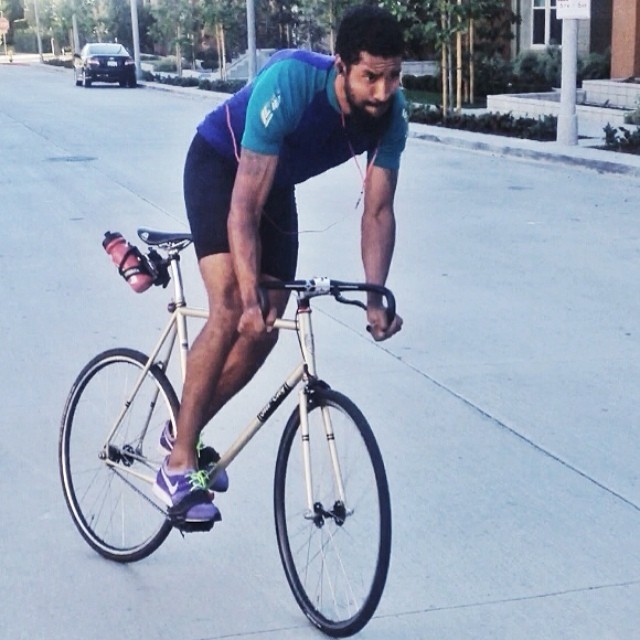 Brandon Gray: This dedicated 7-mile bike route starts in Culver City, and takes you right down to the South Bay—giving you access to Santa Monica, Marina del Rey, and Manhattan Beach. You ride along Ballona Creek until you get closer to the ocean, and then it’s great ocean and beach views. It’s great for solo rides, too.

Los Feliz
BG: Instead of driving or hiking up into Griffith Park, ride a bike instead. You will, at times, be sharing the road with cars. (Basically, any path that’s paved is bike-able.) I usually start at the entrance of the park off of Los Feliz Blvd. This ride is challenging given the inclines, but the payoff of the views at the top are unbeatable. Plus, it’s downhill all the way back, which can be a bit crazy when you ride a fixie like I do.

BG: I love riding up to the Palisades and Malibu. When you’re using only one gear—like I am— this can be challenging ride since there are inclines, small and big. You will be riding alongside cars, and will encounter other bike riders and runners, so be careful. That said, nothing beats the view of seeing the coast, especially at sunrise or sunset.

BG: Every day, I ride from my apartment in Little Ethiopia to work in Downtown. My route will depend on how much time I have. Sometimes I take Figueroa St. and cruise down side streets, and explore neighborhoods. Other times I roll right down Pico Blvd, and take in all the cultural changes and different neighborhoods that vary from block to block on this one long stretch of road.

Culver City, $$
BG: After a bike ride along Ballona Creek, I usually hit up Destroyer in Culver City. (It’s actually a place I frequent a lot.)

BG: I love to bring my bike on the Metro, and ride down to Long Beach to eat Cambodian food at one of my favorite restaurants: Crystal Thai-Cambodian Cuisine. My go-to order are the frog legs.

BG: Cruising around the San Gabriel Valley is a must for some of the best Asian food there is. I always visit Beijing Pie House for their xian bing, which are dumpling / meat pies, Mama Lu's for dumplings and then finish with boba tea at Half & Half Tea House.

Fairfax, $$
BG: Getting drinks at the low-key, and always good, Blue Collar on Fairfax.

Santa Monica, $$
BG: The Santa Monica Farmers Market, which I've been hitting up every week for the last 3 years. 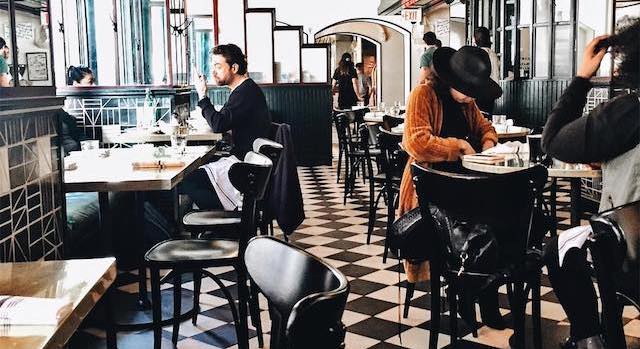 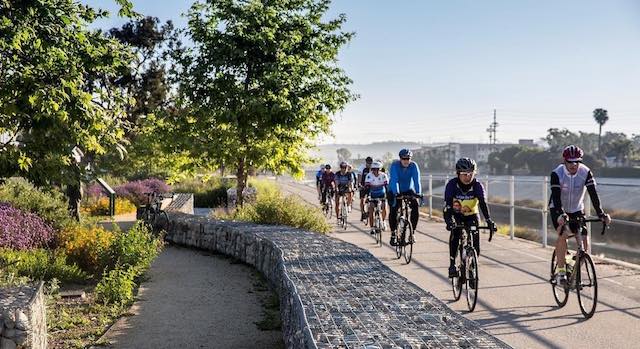 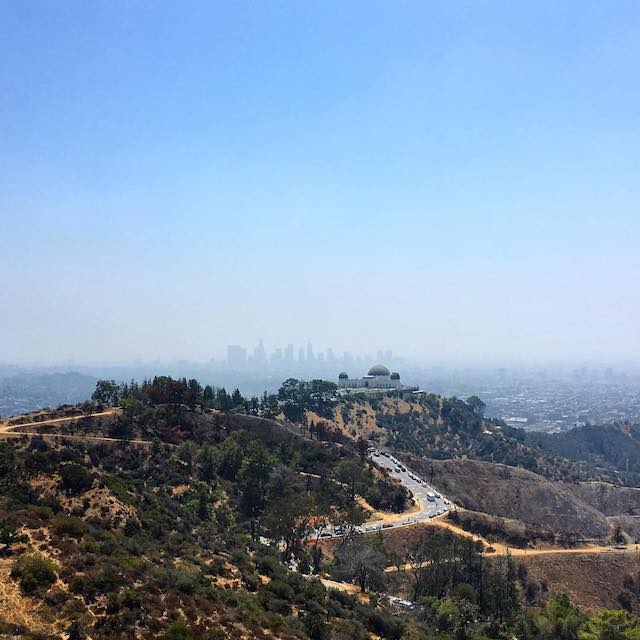 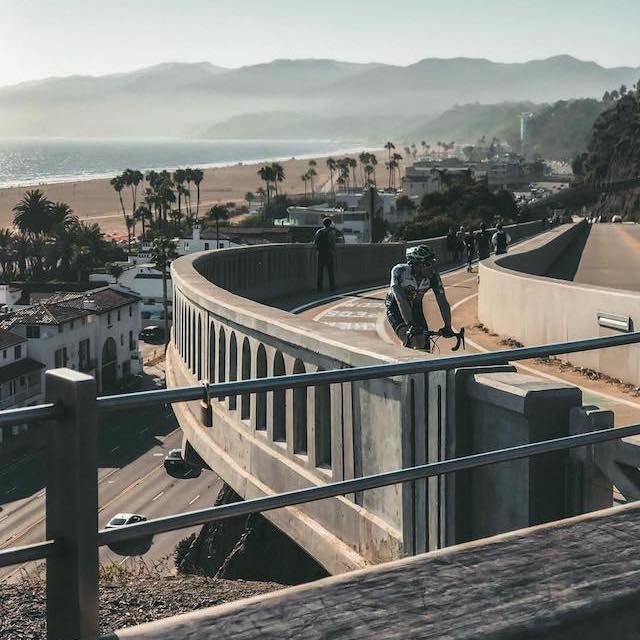 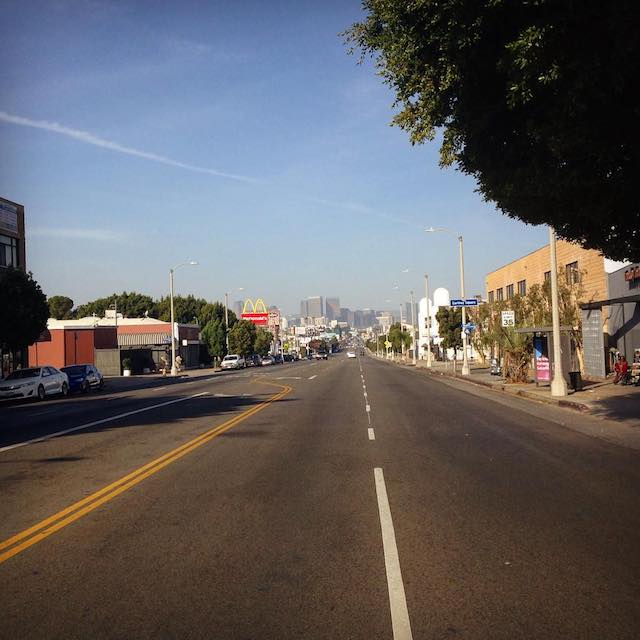 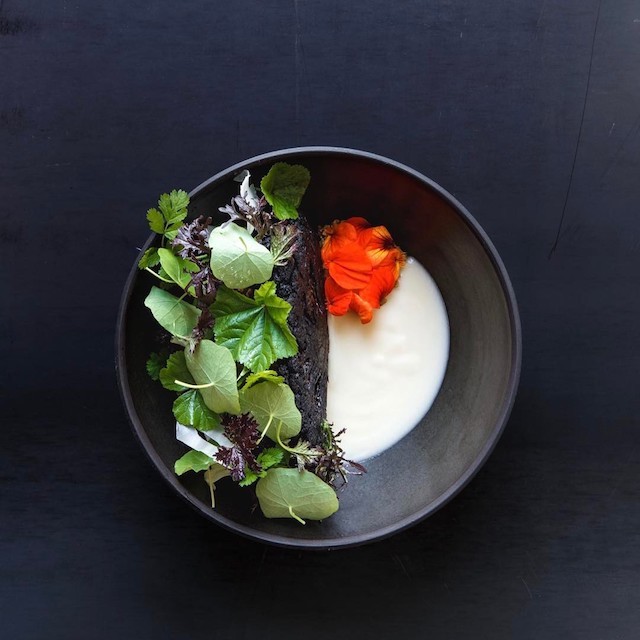 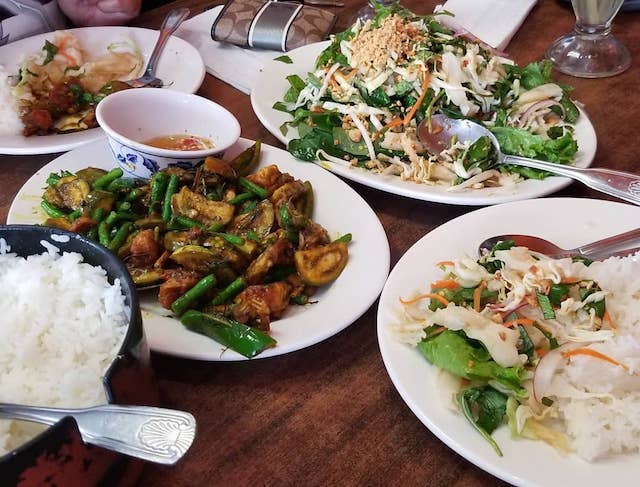 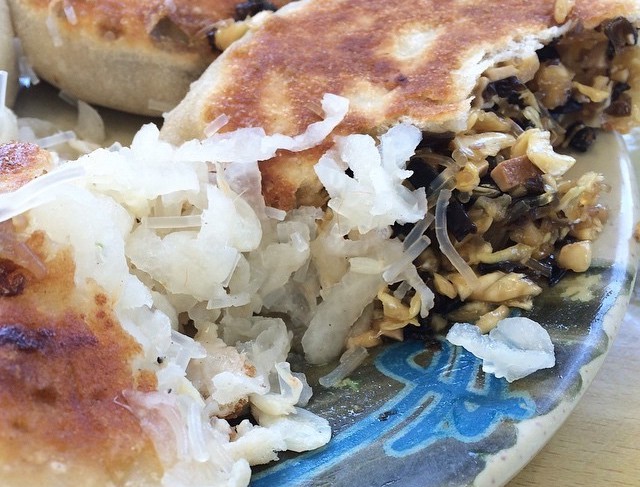 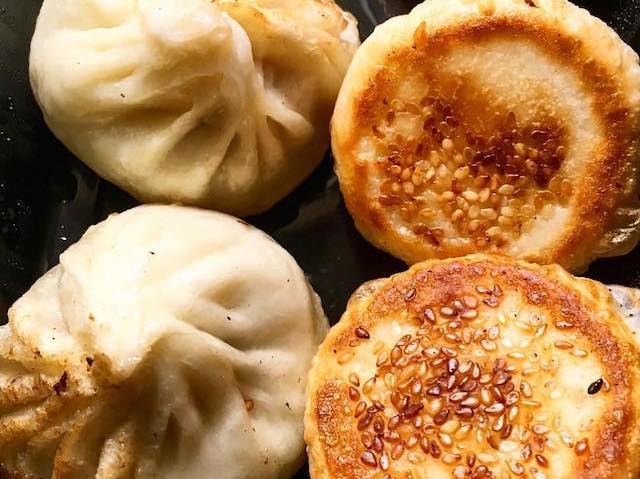 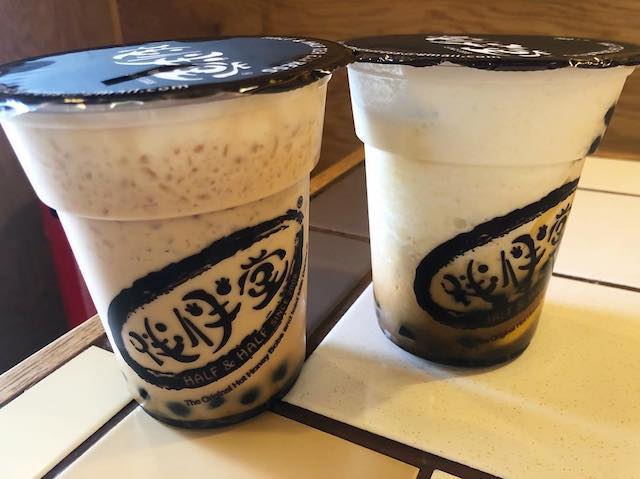 Half & Half Tea House, image courtesy of @eunyoungeats 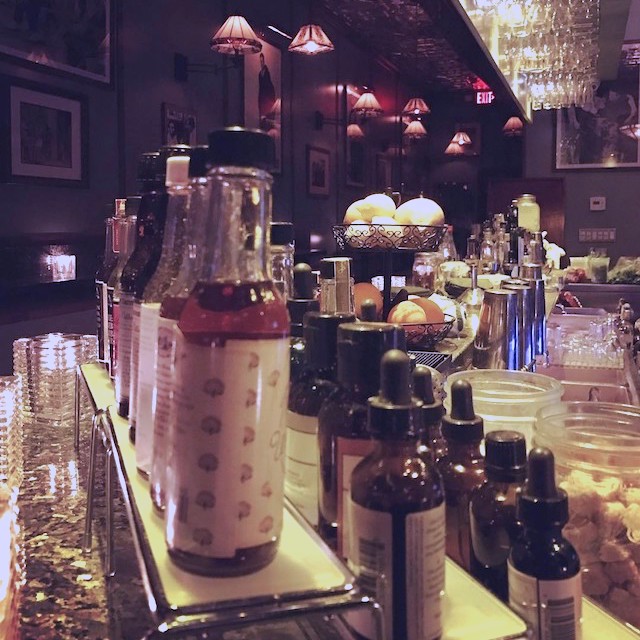 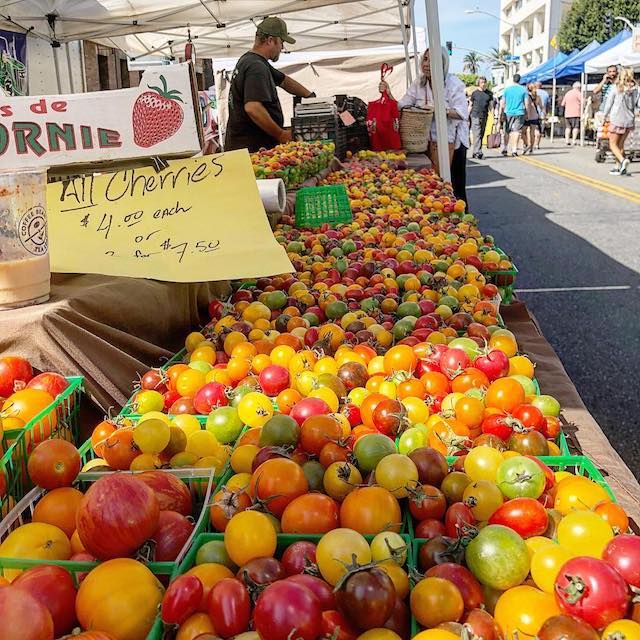