Slip on a pair of flip-flops and grab a taco—it’s a perfect day for exercise and fresh vibes in Santa Monica, California

Yes, you can bottle up our trendsetting cold-pressed juice, but our particular brand of fresh air and good vibes can only be soaked up in the seaside mecca of fitfreaks, foodies, families and fashionistas that is Santa Monica. Small enough to get around on bike, but big enough to have its own art museum, Santa Monica has much to offer while still maintaining an, “Oh shit, I forgot my wallet. Can I pay for this taco next time?” community culture.
Home to creative companies, dot-coms, several medical centers and a solid proportion of affluent families, don’t be surprised to see the mixed bag of people in line at Groundwork Coffee Co. in business suits, statement overalls, scrubs and manbuns bragging about the six-mile hike they ran blindfolded this morning. The sunkissed locals may be a jumble of artists, surfers and doctors, but everyone is united by a love for all things fresh.
Although there are several farmers’ markets in the Santa Monica city limits, perhaps the most popular is on Arizona near 2nd St. on Wednesdays and Saturdays. Farmers and their regular customers ranging from acclaimed chefs to average Jodies can be spotted chit-chatting like old pals. Which acclaimed chefs, you ask? Wolfgang Puck, Nancy Silverton and Curtis Stone are all frequenters, but the true star is Travis Lett, guru chef behind Venice staple, Gjelina and the newer bakery, deli and cafe, Gjusta.
From staying fit outdoors to expecting locally grown and organic everything, Santa Monica’s freshness is a lifestyle, rather than just a standard for its produce. In SaMo you can hunt for designer labels at Buffalo Exchange and play beach volleyball with complete strangers. When summer rolls around, there are free concerts at the Santa Monica Pier with legit featured artists, and in the winter there’s an ice rink at the promenade even though the ocean is so close you can see, smell and hear it.

To keep it fresh as the locals do, hit up these spots to eat, play and stay in Santa Monica. 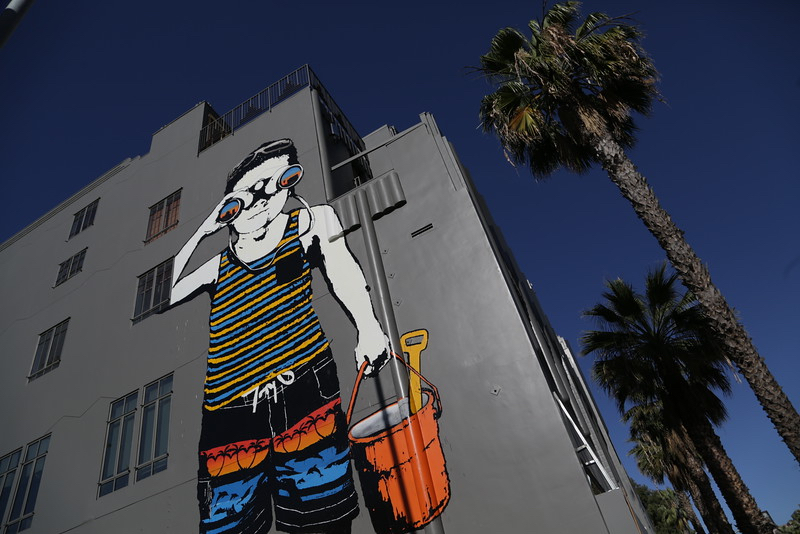 This guy might have a height advantage, but views of the beach in SaMo are for the taking. 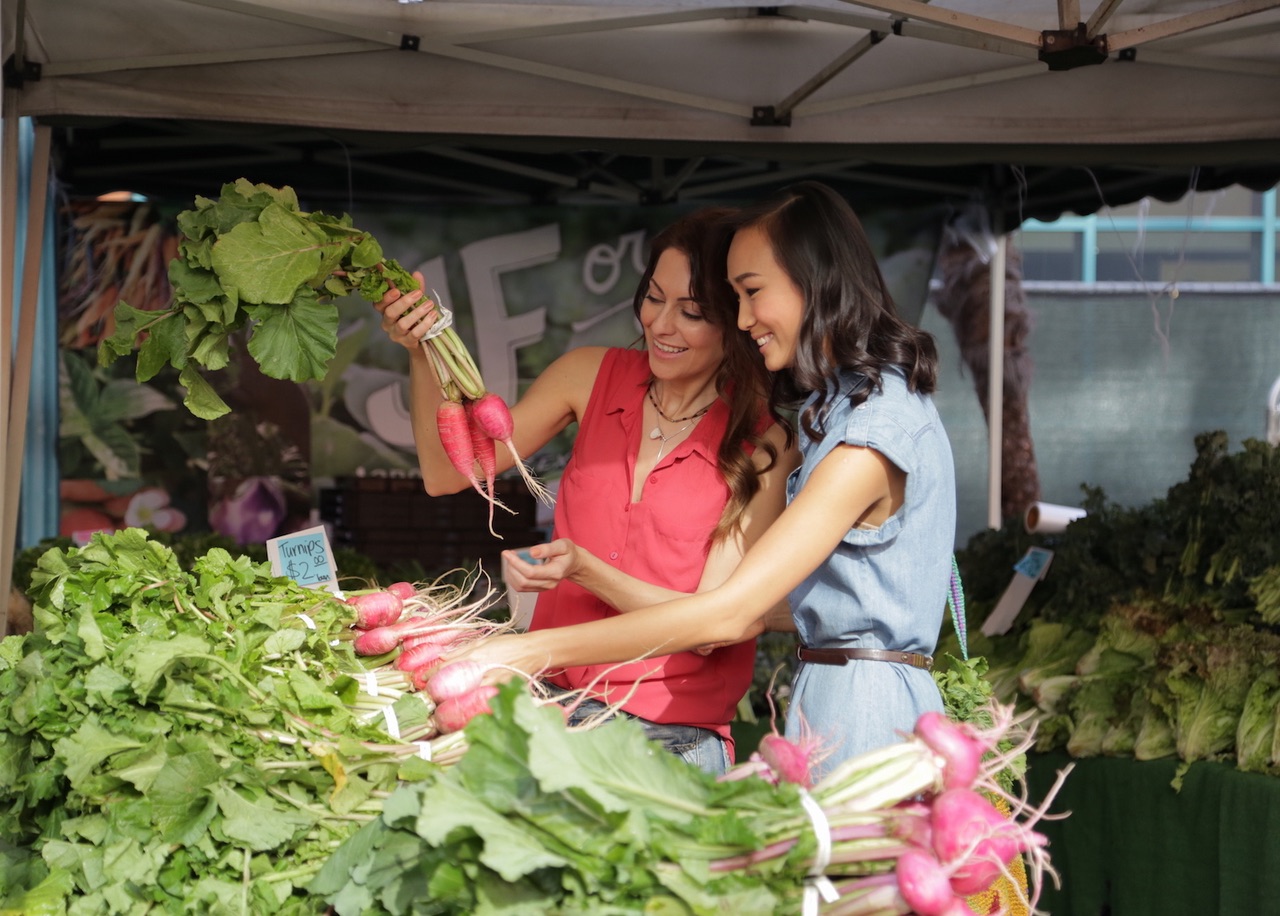 The farmers market on Arizona near 2nd St. is ideal for fresh produce and celebrity chef sightings. 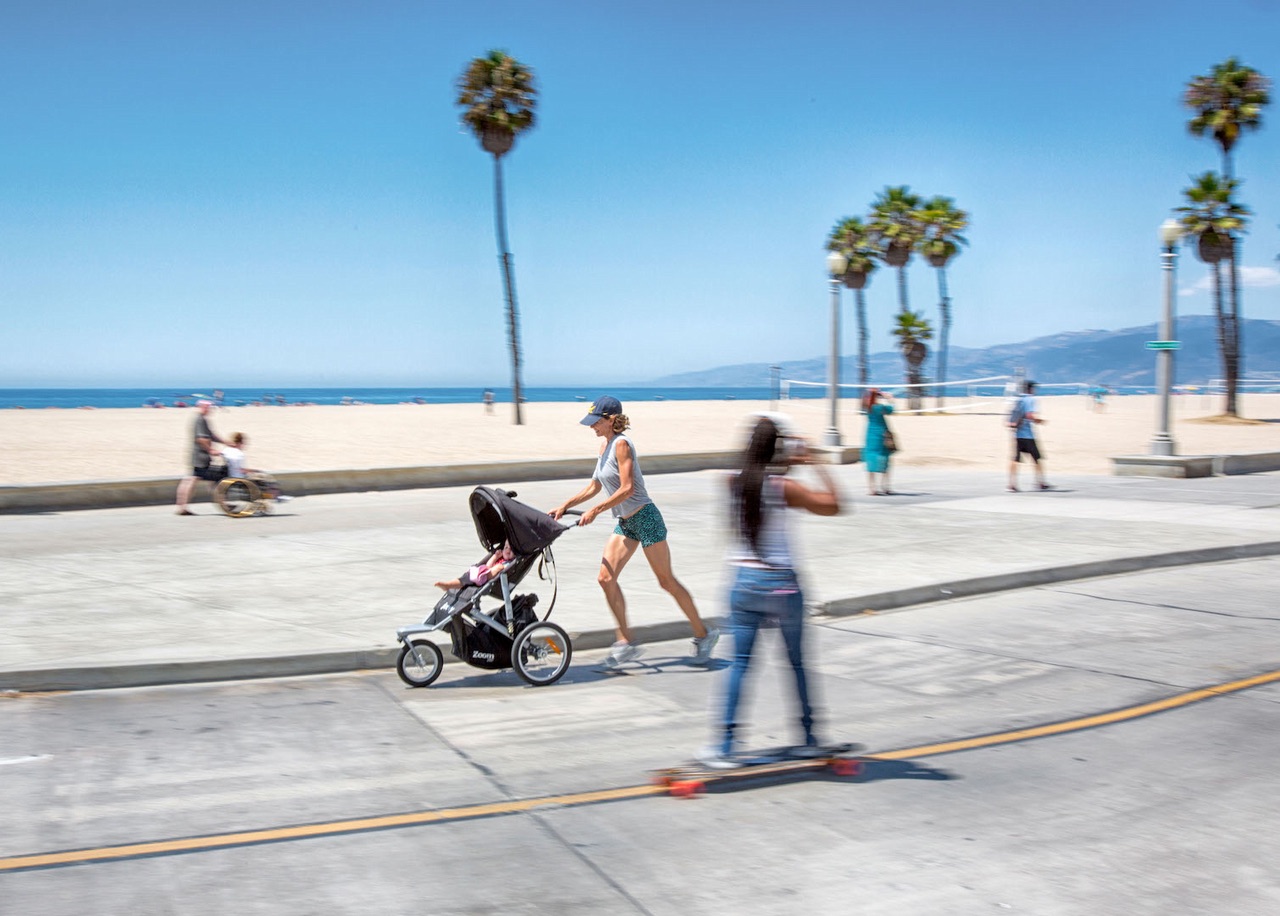 I usually find that a two-buck taco from a truck totally trumps the slew of trendy Mexican restaurants popping up all over LA, but Mercado is an exception to the rule. Located just around the corner from the Third Street Promenade, it’s the perfect pre- or post-movie date spot where food and ambiance each hold their own. Why pick between form and function when you can have them both? 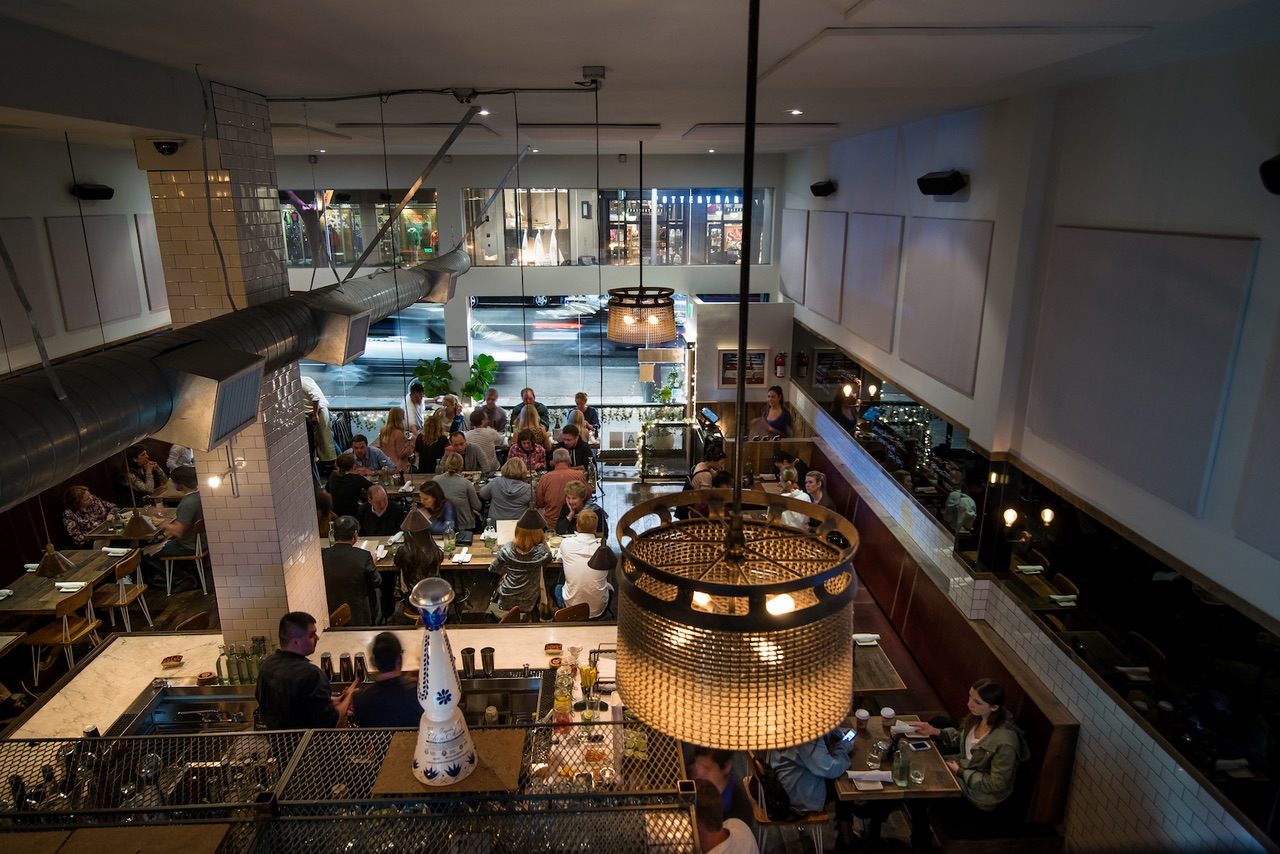 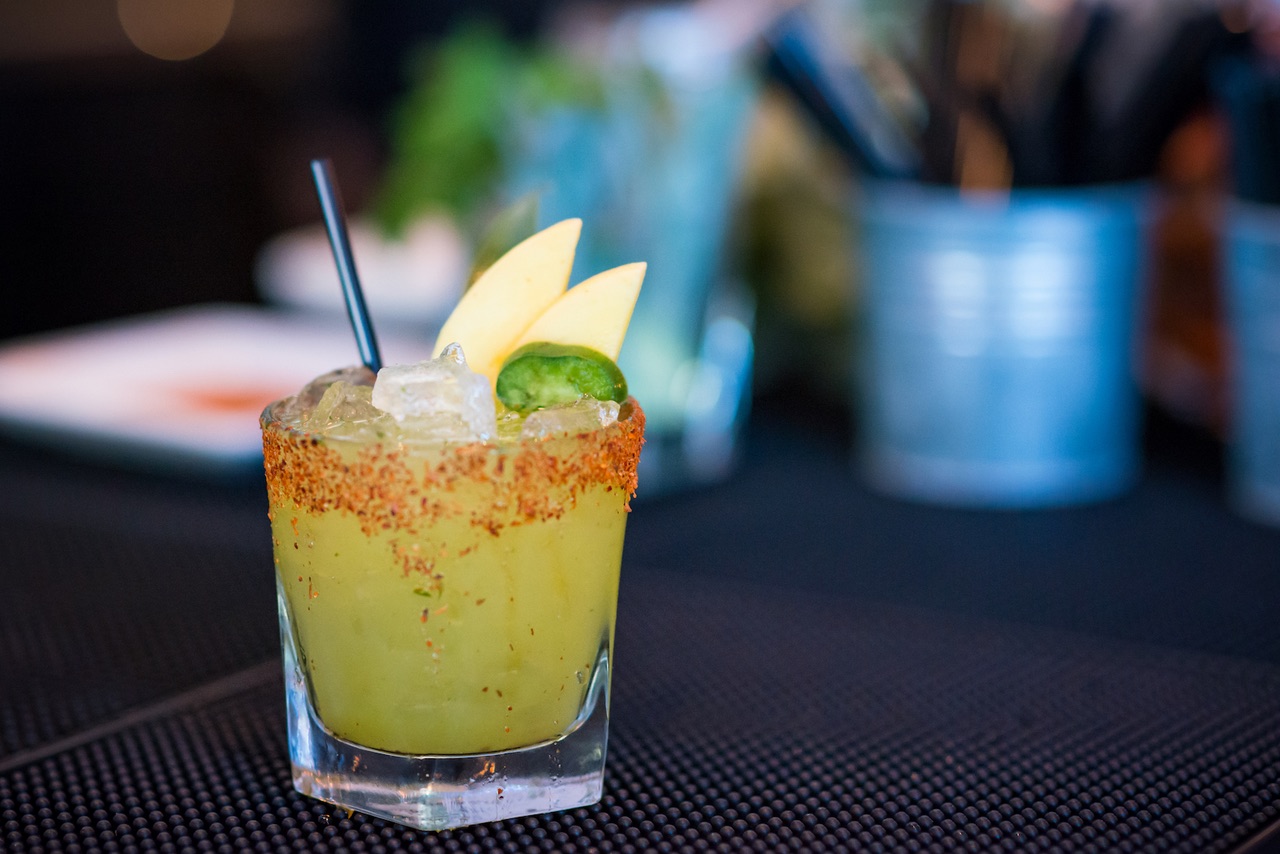 If only every marriage were as happy as that of jalapeño margaritas + carnitas ... 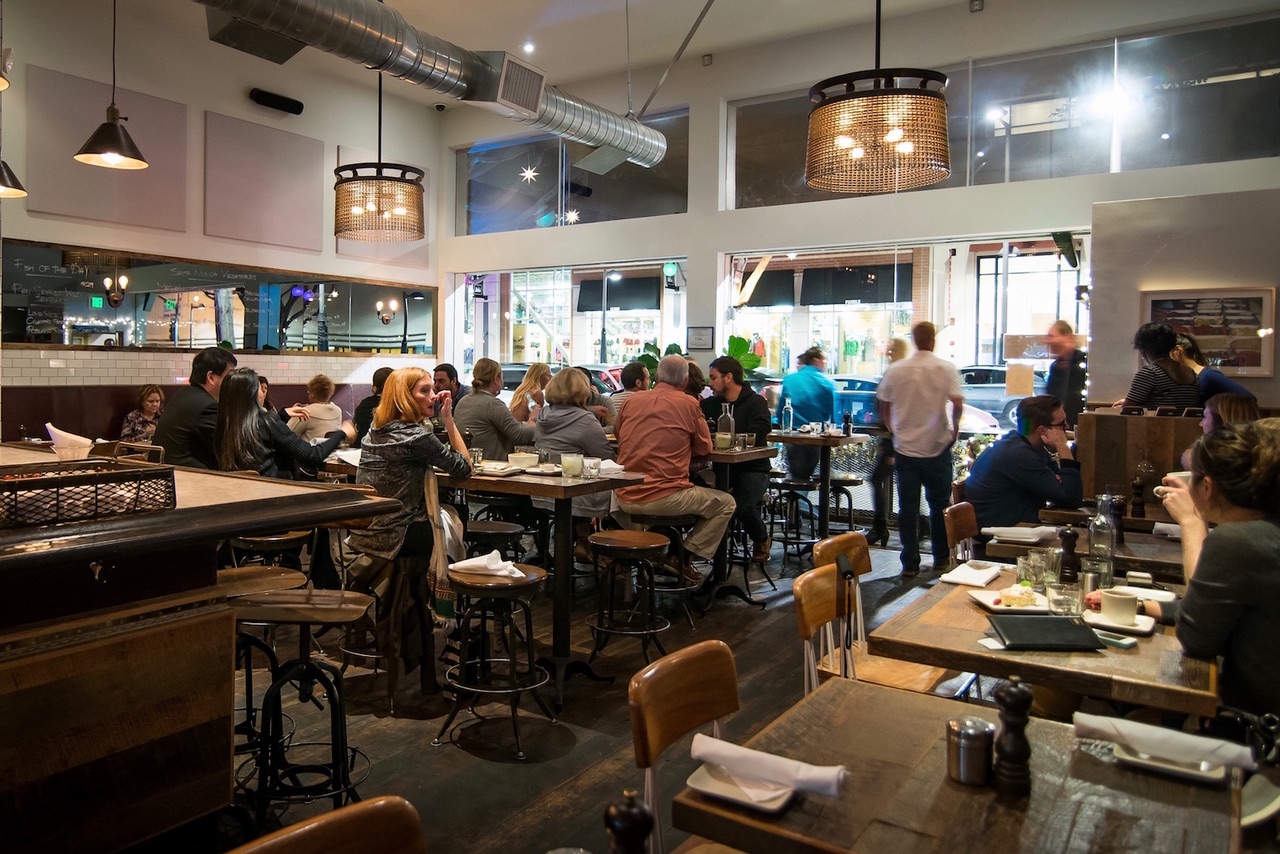 Always crowded, but never a long wait, shimmy your way up to the counter and order what may be the tastiest omusubi in Southern California. These adorable Japanese rice balls with fresh fillings have won over so many tongues that the tiny establishment has opened another location in Culver City. Some swear by the miso beef ball, but the miso mushroom is just as hearty and memorably unique. Cheap, notably fresh, and surprisingly filling, one or two rice balls makes the perfect snack while popping in and out of the Main Street boutiques and thrift stores.
Pro tip: The eco-friendly folks at Sunny Blue will deduct 10 cents from your order if you bring your own container. BYOC, y’all.

One of the only video rental stores left on the westside, renting movies from this quirky establishment is way more rewarding than browsing Netflix’s lame inventory for the ump-hundredth time. This local gem almost went under after 30 years in business, but Anapurna Pictures fortunately swooped in and transformed Vidiots into a foundation. Browse the never-ending titles categorized by genre and director—if Vidiots doesn’t have it, no one does. For film lovers and those who lament the fall of the video store, this place is heaven.
Pro tip: Now that Anapurna upped the cash flow, Vidiots hosts star-studded screenings, comedy events, trivia nights, director’s series and more. Sometimes free food is involved.

While many of LA’s art galleries are disconnected and fighting for attention, Bergamot Station is much like the people of Santa Monica: cohesive, funky and collaborative. A historical landmark, the gallery complex has retained its historical name from when it was once a stop on the Red Line Trolley between Downtown and the Santa Monica Pier. Weave in and out of the 30-some-odd galleries, which are extensive and varied in genre, and feature both well-known names and newbies. Trying to impress a date with your cultural clout on a budget? It’s free!
Pro tip: The Gallery of Functional Art has a store that might remind you of your weird Aunt but also has rare, arty pieces that make great gifts like jewelry for yo mama or a vase for that couple getting married next month.

For a truly LA experience that will leave you begging for mercy, take a climb up the 160 wooden steps hidden in the hillside at the intersection of Entrada and Amalfi Dr. Even though your quads will feel the burn after just one round, the ocean view from the top is worth the climb. Not to mention, the swarms of people ascending and descending the stairs ranging from firefighter to MILF are all so intense that climbing the Santa Monica Stairs almost feels like a team sport.
Pro Tip: To avoid the crowds, hit up the stairs during the workday. But beware, half of Los Angeles’ population “freelances” (in other words, you’ll always have an audience). 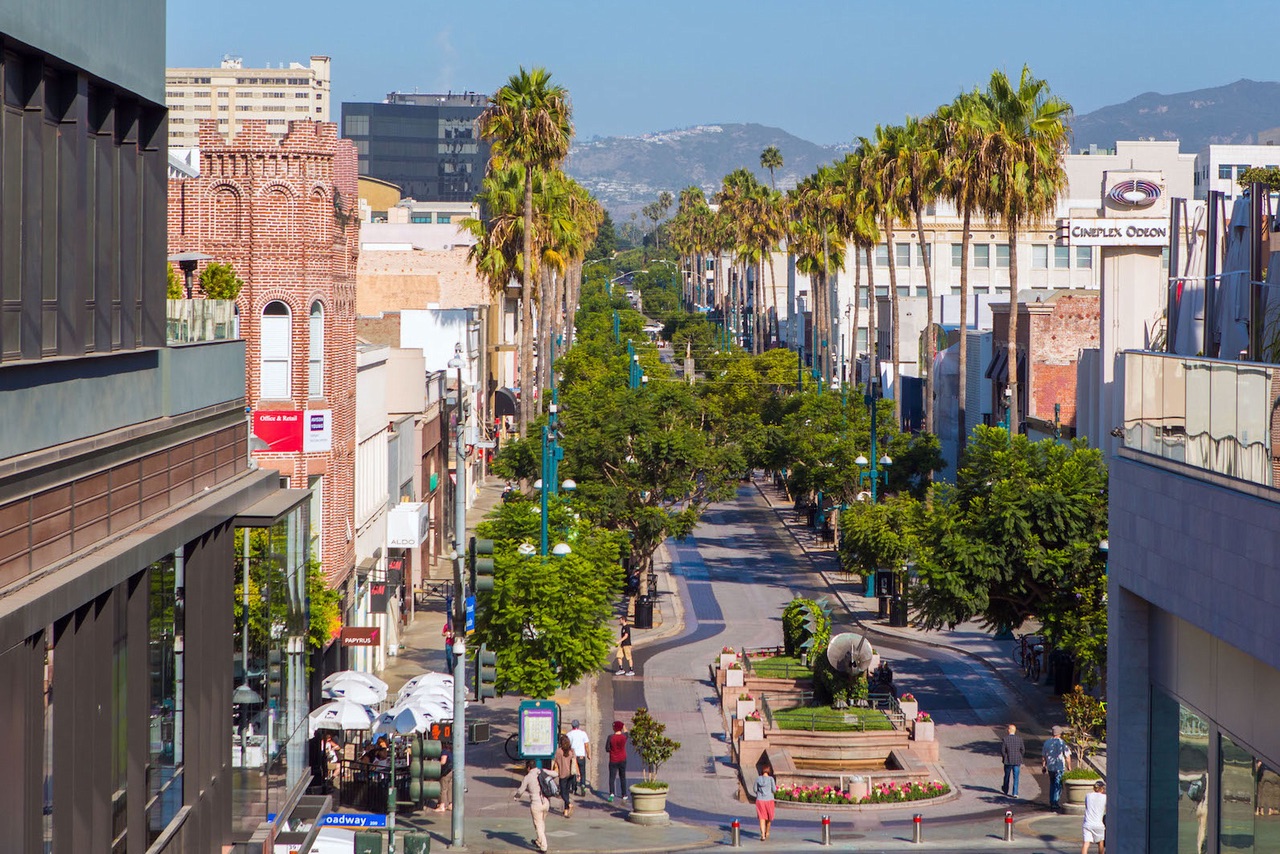 Sure, the Third Street Promenade might be just another outdoor commercial shopping center, but aren't the dinosaur sculptures charming?

Locals and tourists alike will tell you that the bike path is their happy place. Like the stairs, the bike path attracts all walks of life: lifestyle bloggers snapping selfies while trying not to crash, bros on skateboards, tots on tricycles—the whole shebang. Cruising down the bike path is a great way to see the beaches of Santa Monica, but also Venice, Manhattan, Hermosa, Redondo and others. Hunker down and break a sweat, or take it easy. No one’s judging. Just remember, this is a bike path. If you’re on foot, don’t be surprised if locals curse you out as they whizz by on wheels.
Pro tip: Rent bikes or blades from one of the many Perry’s Café and Rentals along the beach. With that special someone? Opt for a tandem and revel in the ridiculousness.
Get Citizine Updates Here

Within walking distance to the Third Street Promenade, the beach and the pier, The Fairmont Hotel is a luxury Santa Monica mainstay to see and be seen. Stay in a plush, airy room with an ocean view, chill poolside and ooh and aah at the famous Fig Tree at the main entrance. To top things off, adjacent to the Fairmont  is the most sought after bar on the westside, The Bungalow. Popping on weekends both day and night, the indoor-outdoor bar and chatty crowd feel like a surfer’s living room and yard. Only this surfer has exquisite taste in furniture and art and might make you wait in line a while to get in.
Pro tip: To get to the front of the clusterfu...crowd attempting to get drinks, you’ll have to pull a classic Larry David “chat and cut,” and shmooze your way to the edge of the bar. 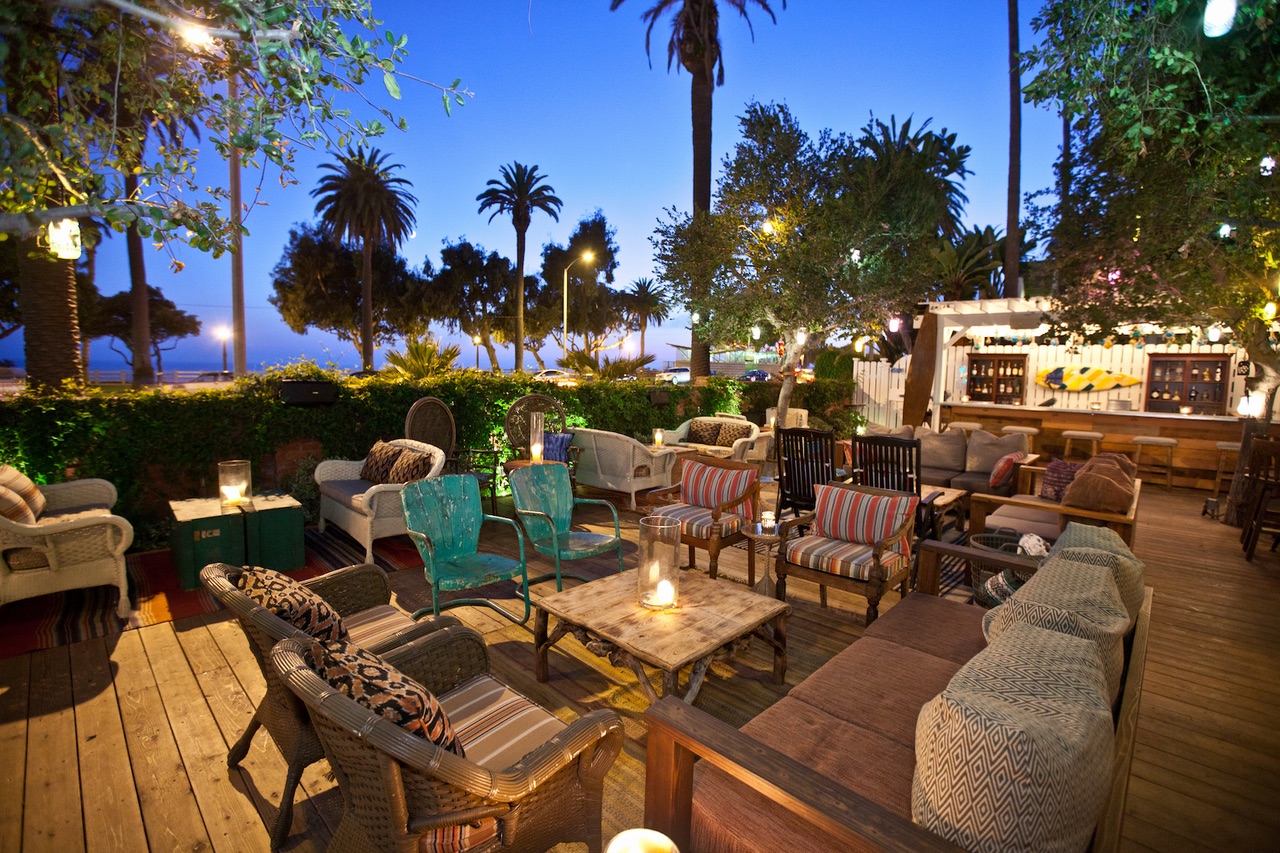 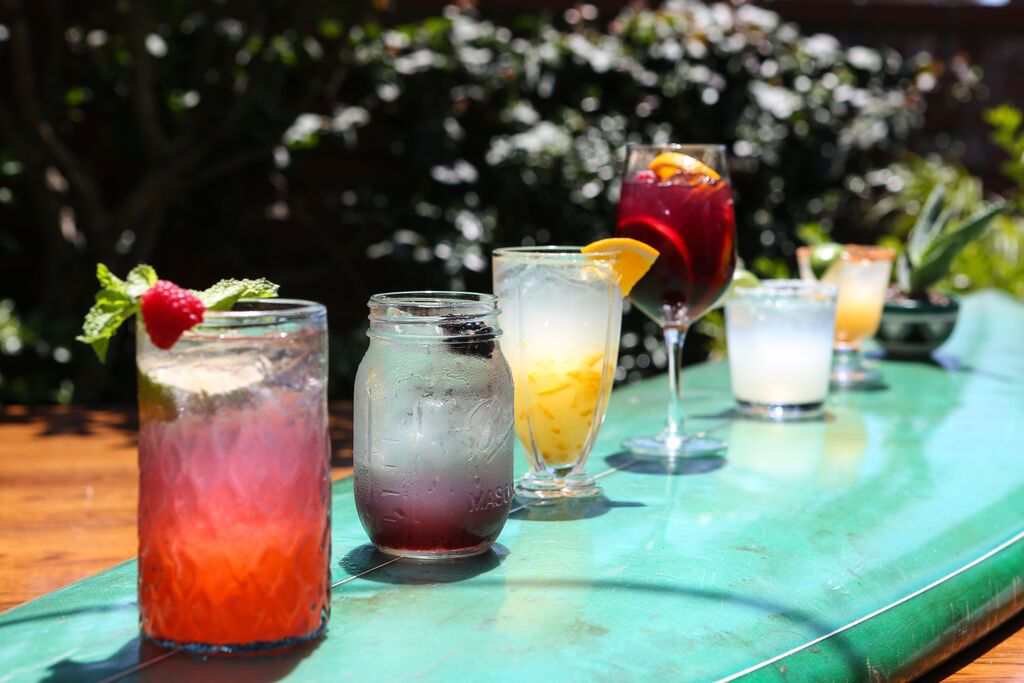 Don't mind me as I make my way across this alcoholic surfboard. 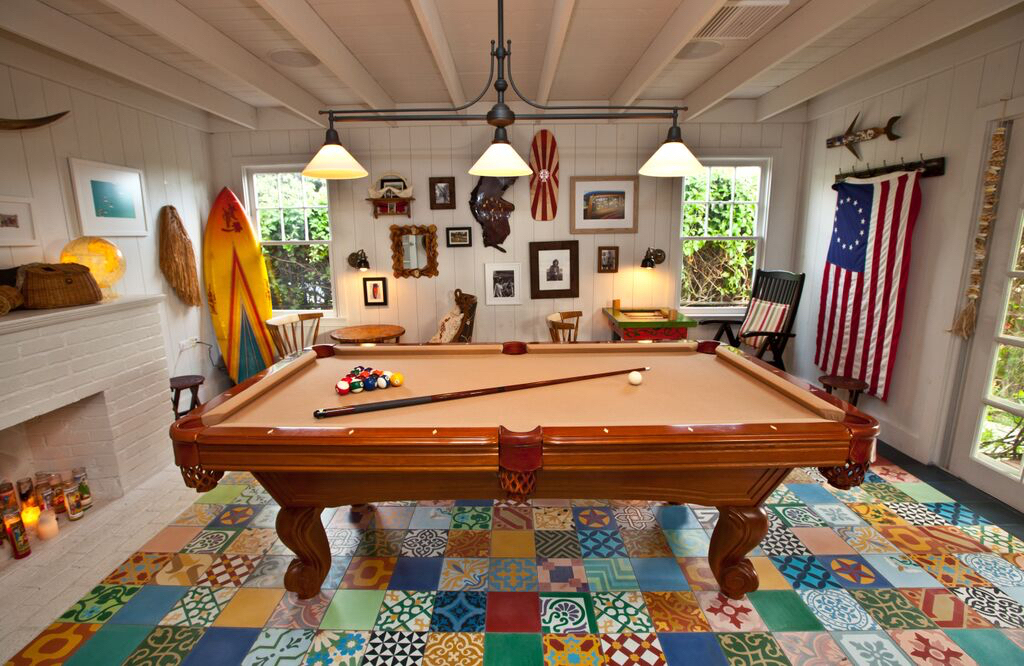 The Bungalow is just as cozy as it looks. 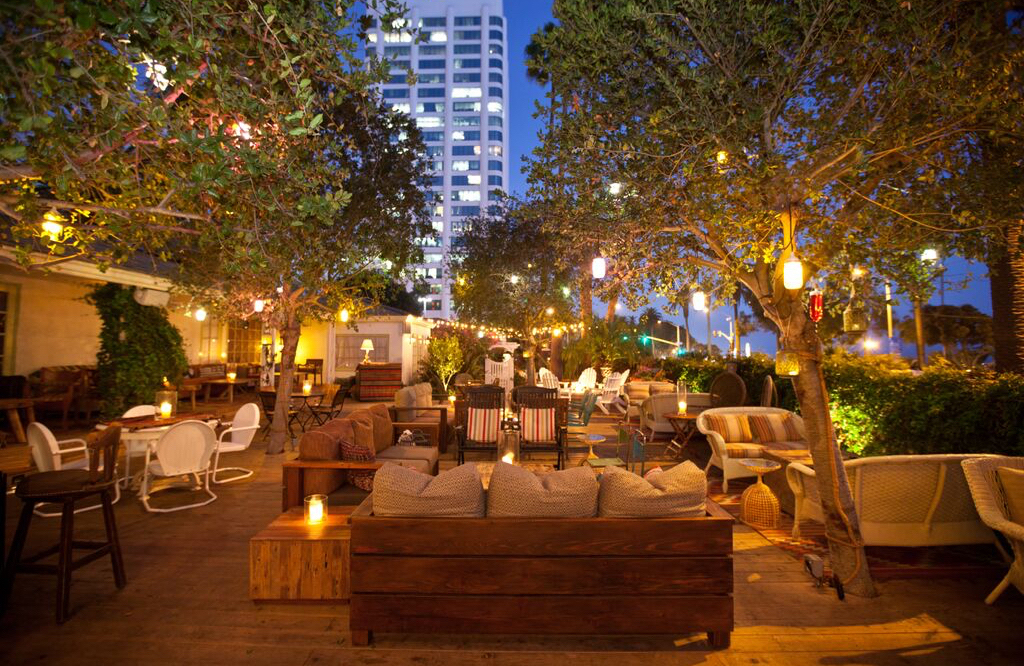 Also idyllically located in the heart of Santa Monica is the Huntley, a boutiquey hotel whose lack of pool is made up for by the rather chic restaurant and lounge 18 floors high in the usually-sunny Santa Monica sky. Come up to The Penthouse for a pricey but worth it meal, to check out the panoramic ocean view or simply to let the good times roll. The Huntley is known for its comfort, class and customer service—a killer trifecta.
Pro tip: No need to pack your favorite shampoo, The Huntley offers Bvlgari bath products.
Arden Shore is a writer, dot connector and sock collector from Los Angeles who believes if everyone wore more yellow, we would be one step closer to world peace. She dreams of being interviewed by The Paris Review. Follow her meanderings @ardyparty.
Featured image courtesy of SMCVB​