These landmarks may not make the open bus tours, but wouldn't you rather visit a witch's house than Hollywood and Highland ... again?

The Hollywood Sign, Santa Monica Pier, Muscle Beach … snore, snore, snore.  Beyond the tacky and tourist infested landmarks of Los Angeles, there are a whole bunch of misfit attractions waiting for you to explore—this is a city filled with artists and dreamers after all. Each offbeat landmark has its own extraordinary tale, so you can make like a tour guide and impress your friends. From giant forks to metallic communists and pipe smoking bulldogs, Los Angeles loves to push the envelope on what’s possible. Grab the selfie stick on your way out, no one’s judging.
Get Citizine Updates Here

Beverly Hills
A sign out front declares, “Please don’t pick the berries! - The Witch” as you approach the overgrown English garden of the lopsided ‘storybook’ house. Designed by Hollywood art director Harry Oliver, the house was built in 1921 as a film studio office but was moved to this location in 1934 and has been a private home, moat included, ever since. When the current owner took over and put up a fence, the neighbors got wiley thinking he was demolishing it. Instead he’s carefully been renovating. The wand chooses the wizard! 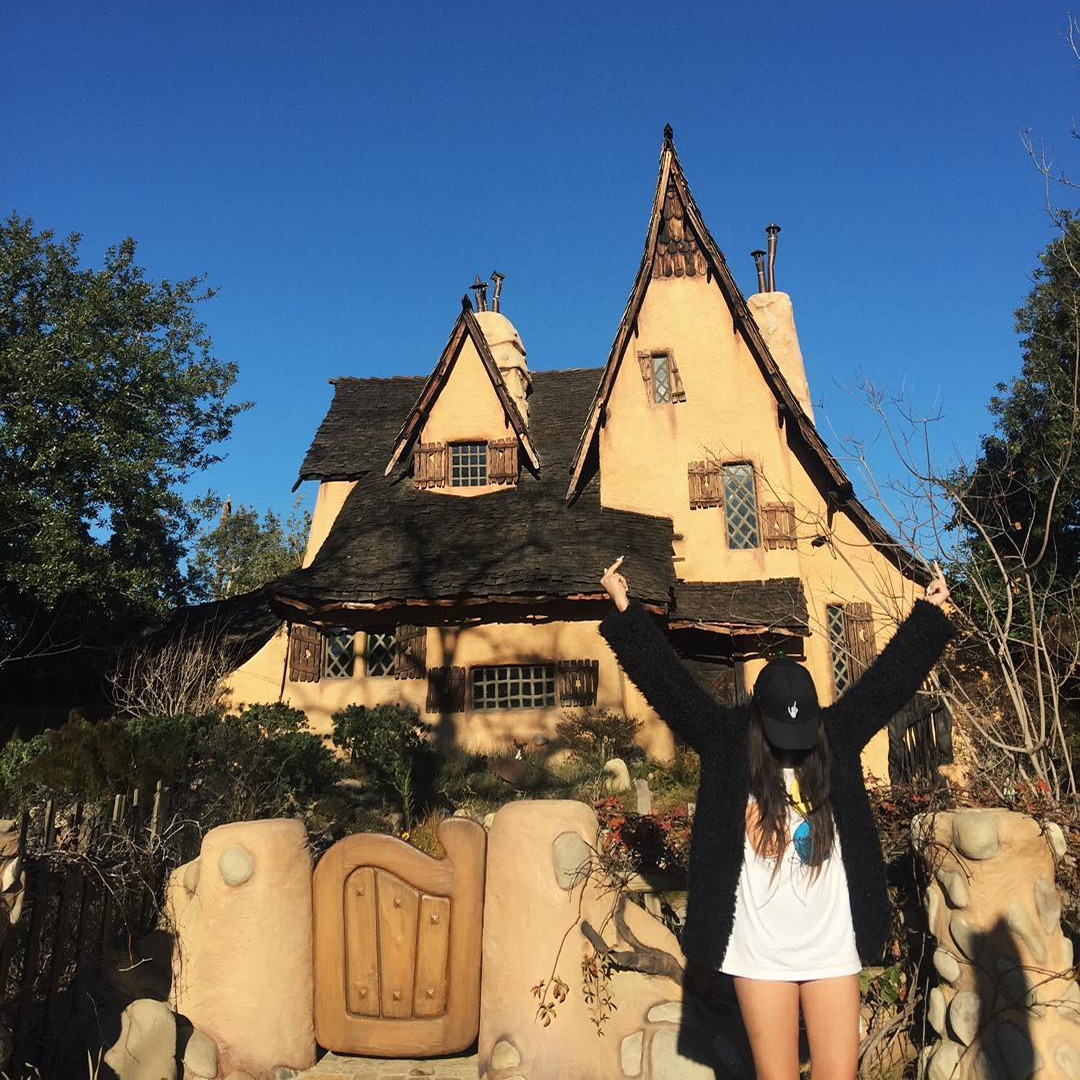 The Fork In The Road

Pasadena
After years of joking that a local fork in the road needed an actual giant fork to mark the spot, one good-humored fellow erected a gigantic fork for his friend’s 75th birthday, posing with mates as Caltrans workers to get it up in time. It was a risky move when what remained was an 18 ft. utensil, for fork’s sake! But the popularity of the stunt among locals saved it from immediate removal, and Caltrans eventually permitted it as public art. 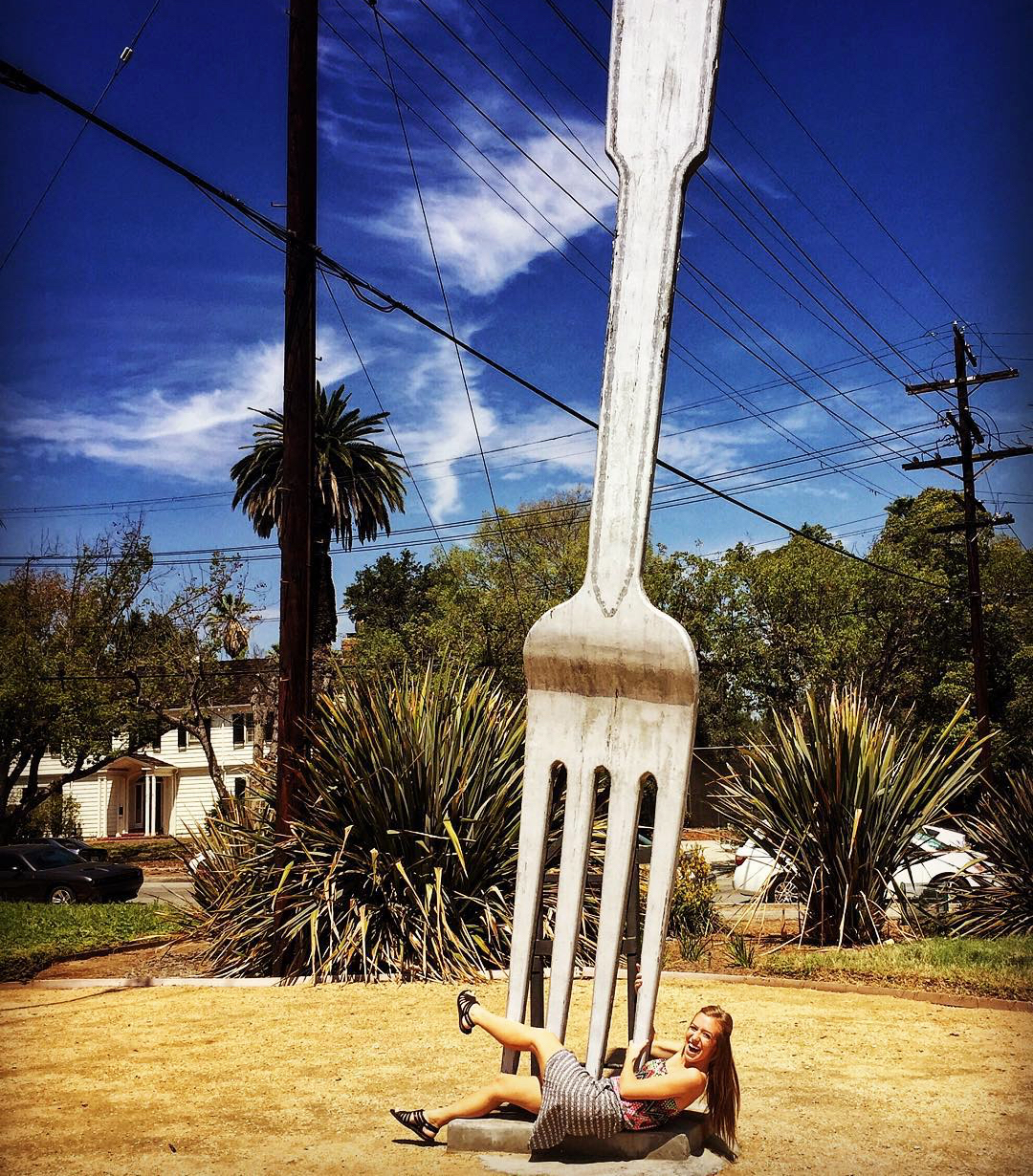 The Fork In The Road. Image courtesy of @littlekatelyn

Santa Monica
With 38,000 links shrooming into a 26-ft replica of a nuclear explosion, this giant metal chain sculpture—now an official historic landmark—may not be the prettiest belle at the ball, but it sure has a kind heart. Built with donation funds from philanthropist Joan Kroc, wife of Ray McDonald, and designed by cartoonist Paul Conrad, Chain Reaction and its message for nuclear disarmament is anything but stark. 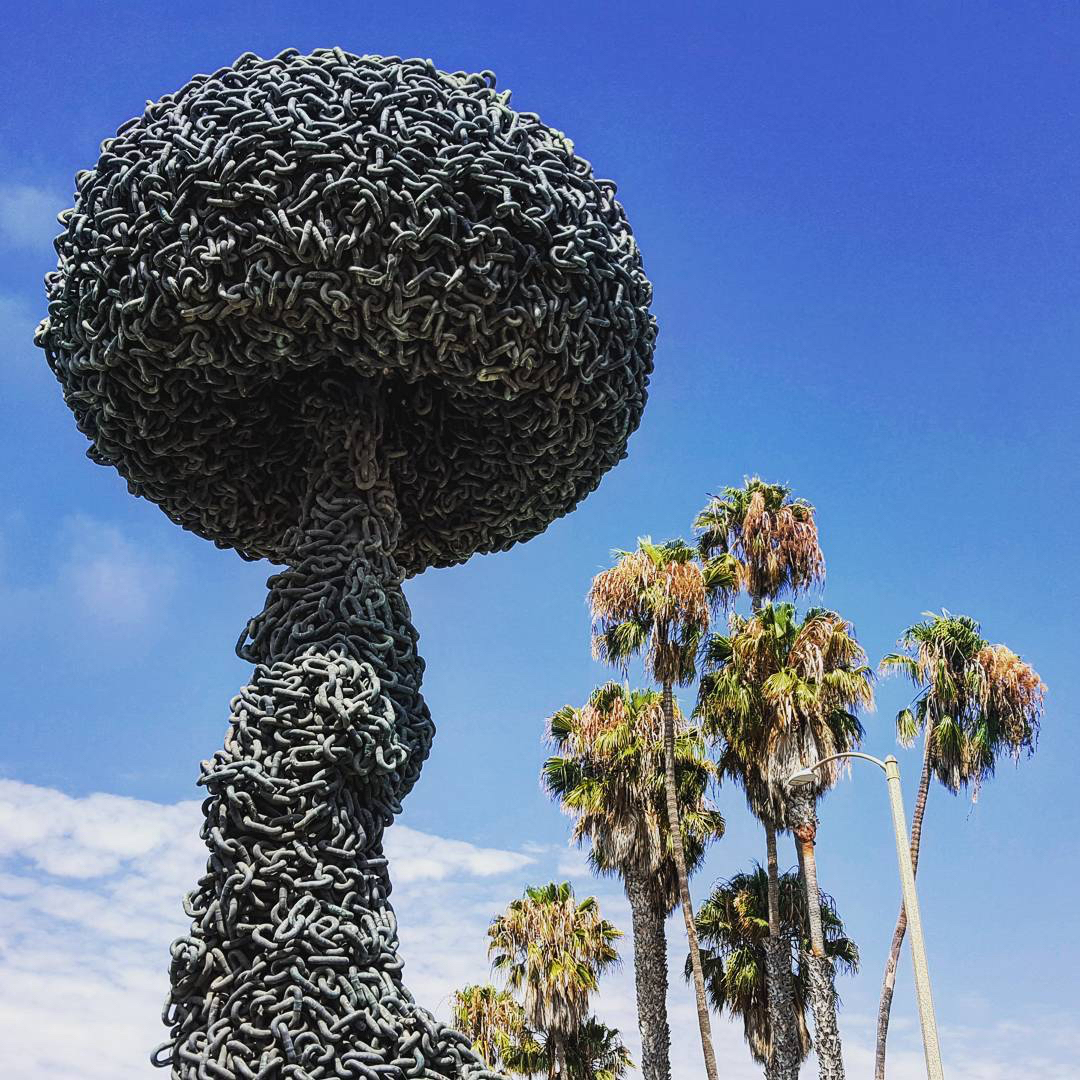 Watts
Talk about dedication to your art ... Watts Towers were built over three decades by Italian immigrant, Sabato Rodia. Using reinforced steel, wire and homemade concrete, he created towers and spaces that are richly decorated with anything he could get his hands on — broken soda bottles, tiles, shells, pieces of mirror and random figurines. What remains are 17 mind blowing structures — the tallest stands at 99 feet!  Sadly, in 1955, Rodia suddenly quit and moved away. Today it’s a National Historic Landmark and the adjoining arts center brings art education to the local youth of South LA. 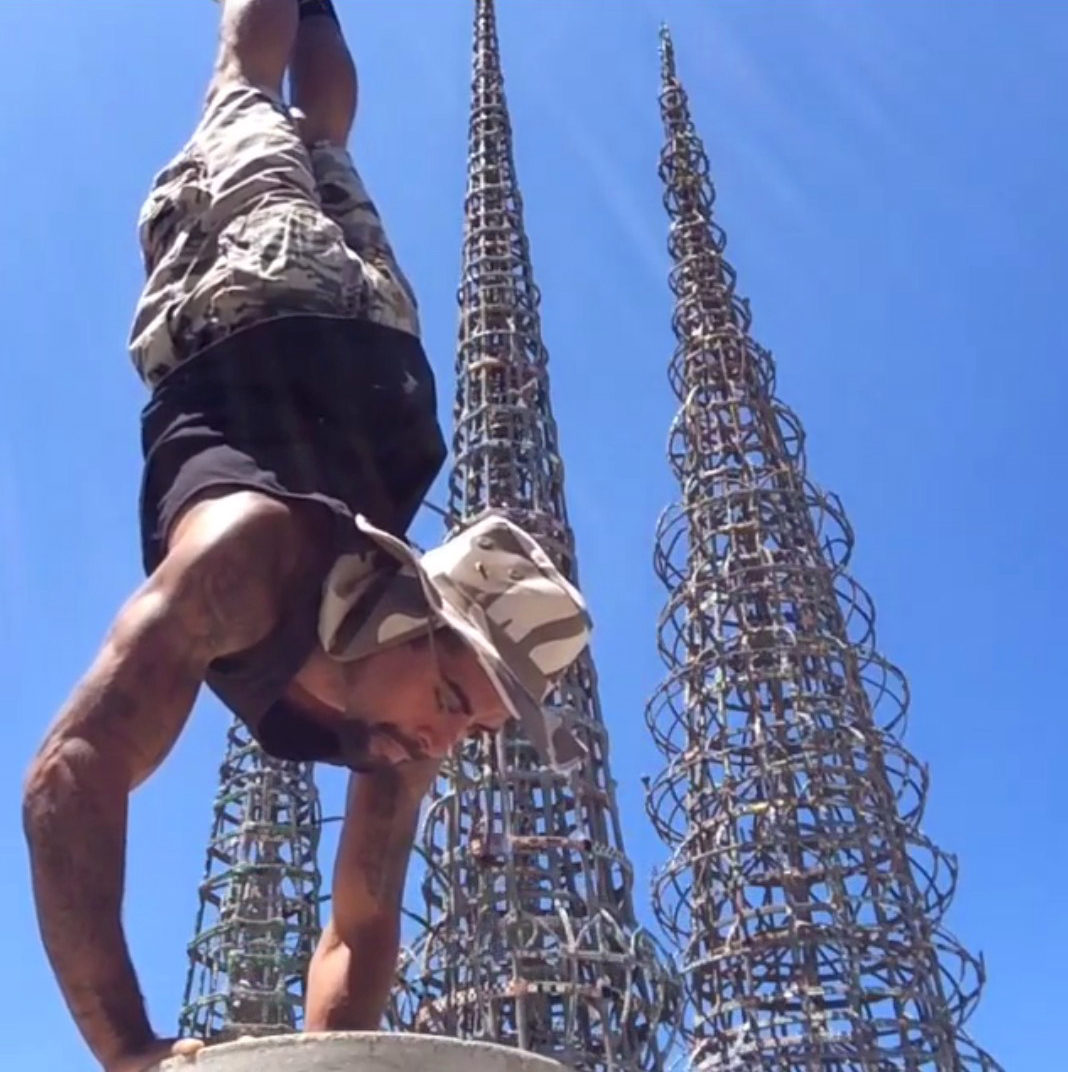 Fairfax
Is there a better Insta opp than a 20-ft chrome metal head of Vladimir Lenin with a baby Mao tightrope-walking across his head? I think not, and you only have to make your way down to La Brea to get in on the action. Miss Mao Trying to Poise Herself at the Top of Lenin's Head has been outside the Ace Museum since 2011 and was designed by Chinese artists the Gao brothers. It’s also a great mirror if you forgot to brush your hair on the way to Republique. 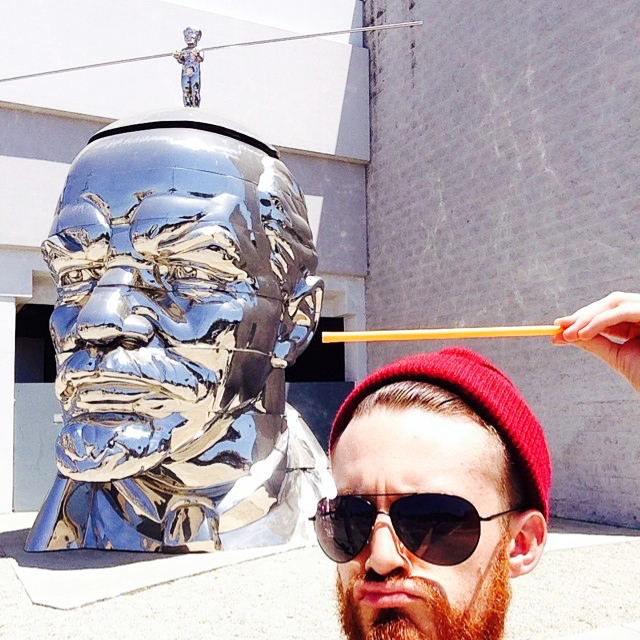 Highland Park
This 22-foot fowl actually took home the Governor's Historic Preservation Award in 2010. But the Chicken Boy didn’t always stand guard in Highland Park. In fact he wouldn’t be here at all if it weren’t for a real life love story. Chicken Boy started out downtown in the 1960’s atop a fried chicken shop on Route 66. As seems appropriate. But when the owner passed away in 1984, he was yanked down. A local lass, Amy Inouye, who for years had walked past Chicken Boy and developed an infatuation with him, noticed he was missing and pestered the realtors until they gave him to her. Today he stands atop the creative art director’s studio in HLP, fittingly still on Route 66. 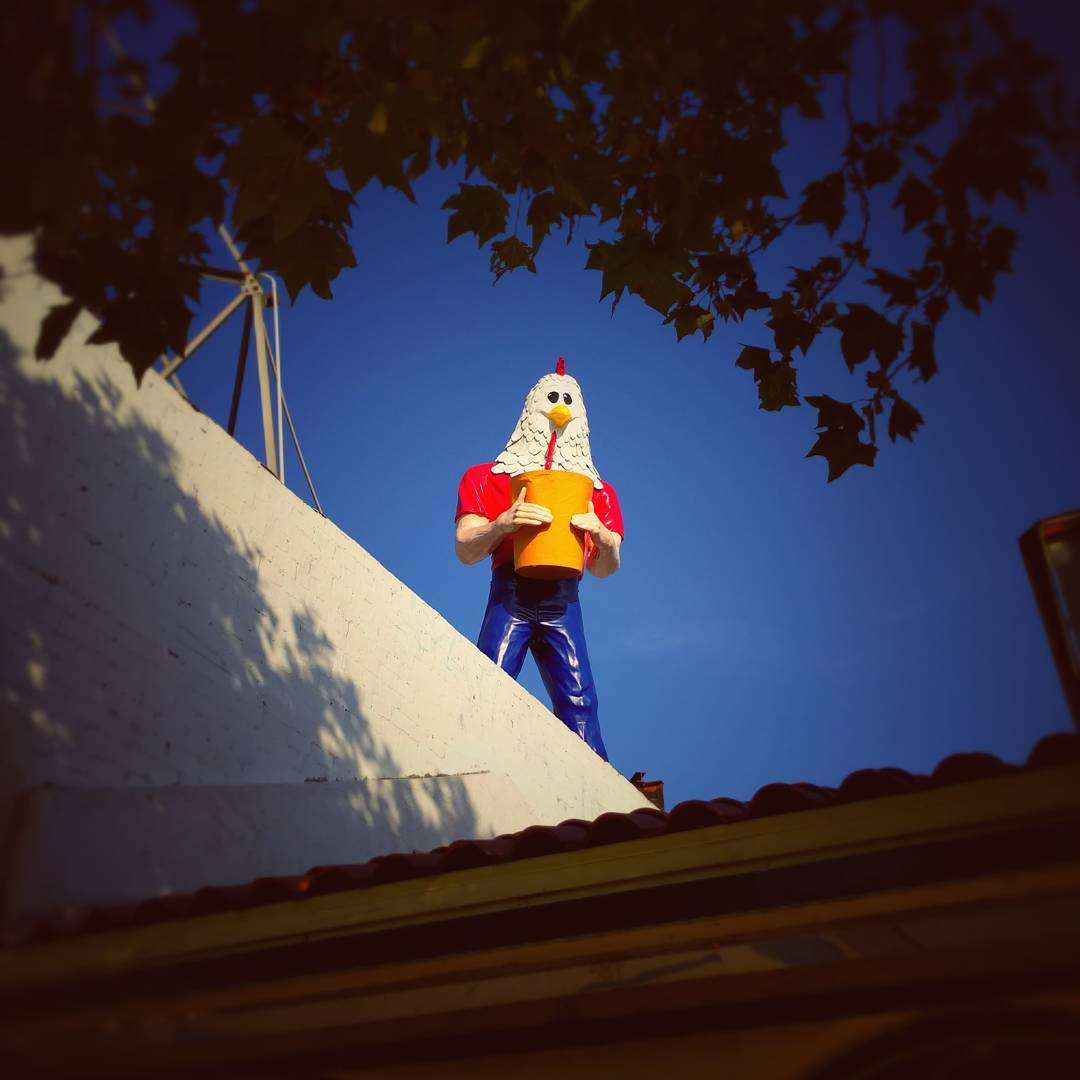 Inglewood
What’s a 63-yr old donut got to do to stay relevant? It certainly helps if you’re 32 feet tall and a film star. The iconic donut has appeared time and time again on both the big and little screen—from Iron Man and Entourage to Mars Attacks! and The Simpsons. Local boys, The Red Hot Chili Peppers, even used it in their Californication music video. And the donuts are pretty good too! 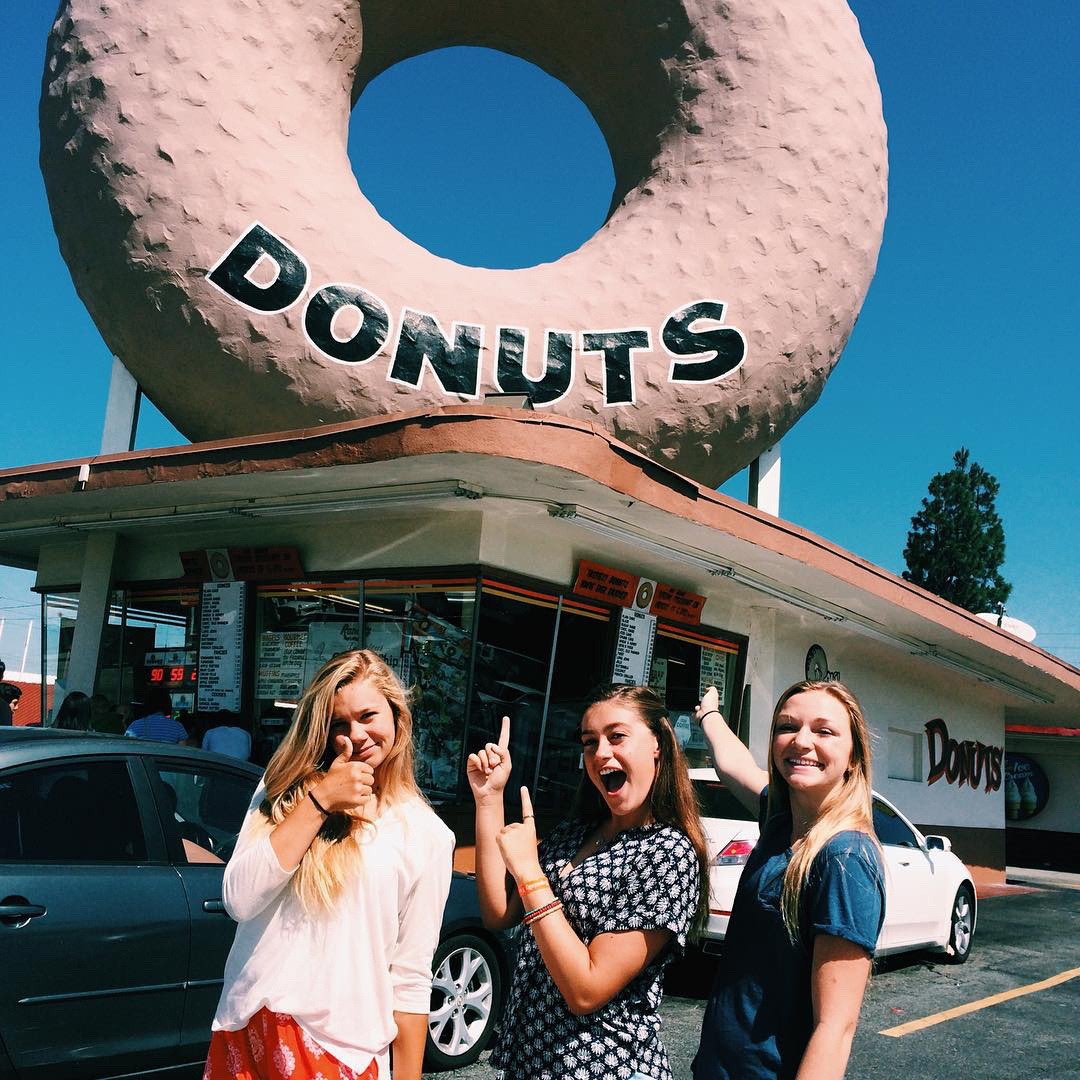 DTLA
The Triforium teaches us that you can be a dismal failure and still find longevity. Dubbed as Three Wishbones in Search of a Turkey, the 60 foot, 60 ton(!) statue was built in 1975 as the world's first polyphonic tower, — motion sensors would translate the motions of passersby into light and sound through prisms and bells. It’s computer was plagued by issues from day one, the reflection pool leaked and it quickly fell into disrepair — and ridicule. The fact it still stands is due to that old conundrum, “too expensive to fix, too expensive to tear down.” It’s still awaiting the kind of restoration that would fulfill the artist’s original vision. 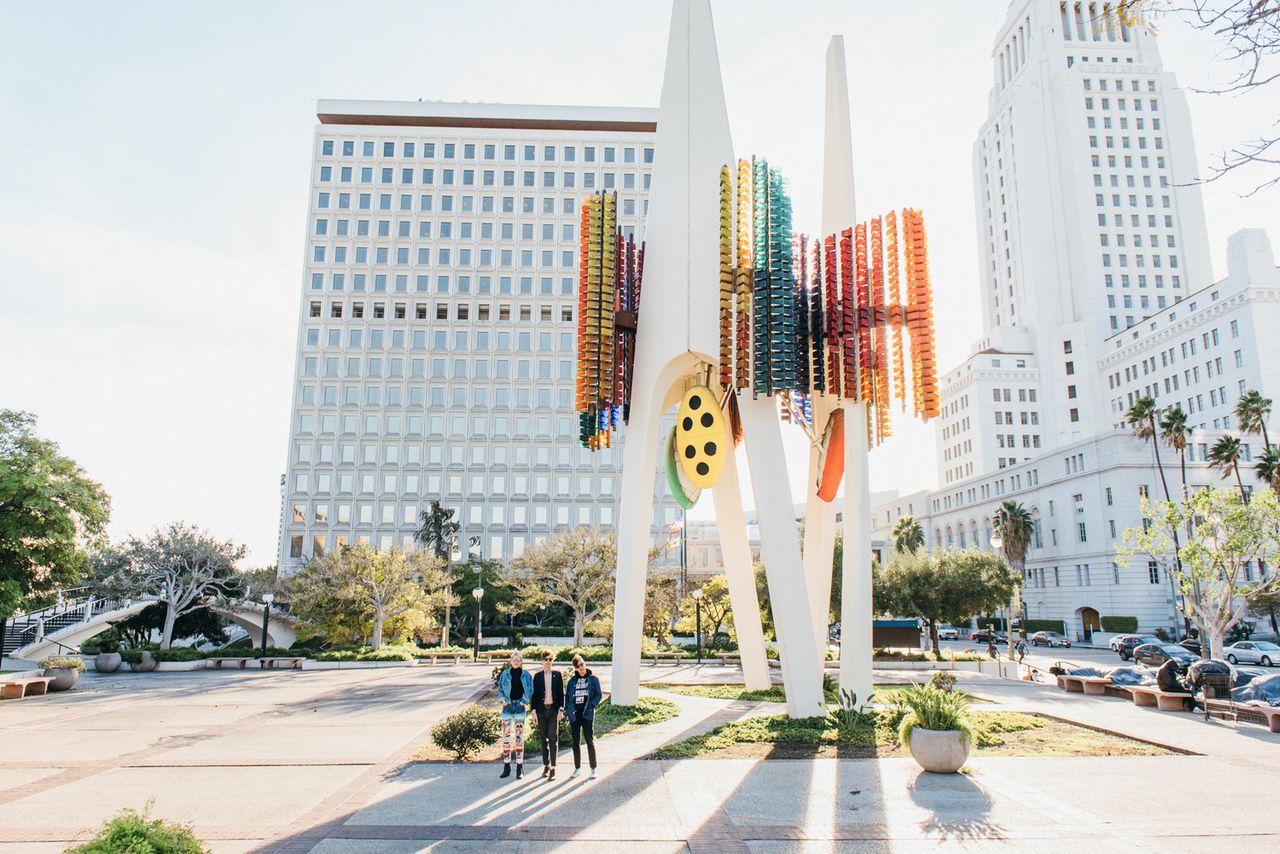 North Hollywood
You get two bangs for your buck here, thanks to one of our favorite bar-preneurs, Bobby Green (Bigfoot Lodge, Sassafras).  For years you could drive down Vineland and ponder why a giant house-sized whiskey barrel was hanging out there. The barrel in question was built in 1941 as Idle Hour Cafe, a tap room. In 1972 it was bought and converted into a flamenco bar. In 1983, the flamenco owner closed the bar and moved herself in—much like the old woman who lived in the shoe. In 2010 it was officially named an Historic Cultural Monument and Bobby’s 1933 Group bought it. But, there’s more. Back in 1928, a giant pipe-smoking bulldog sat on Washington Blvd, selling tamales and ice cream as The Bulldog Cafe. It was demolished in 1966 but the Petersen Automotive Museum created a replica to showcase its architecture. But when the Peterson could no longer house it, Bobby stepped in and said, “Hey, that would look great in the back of my Idle Hour bar!” 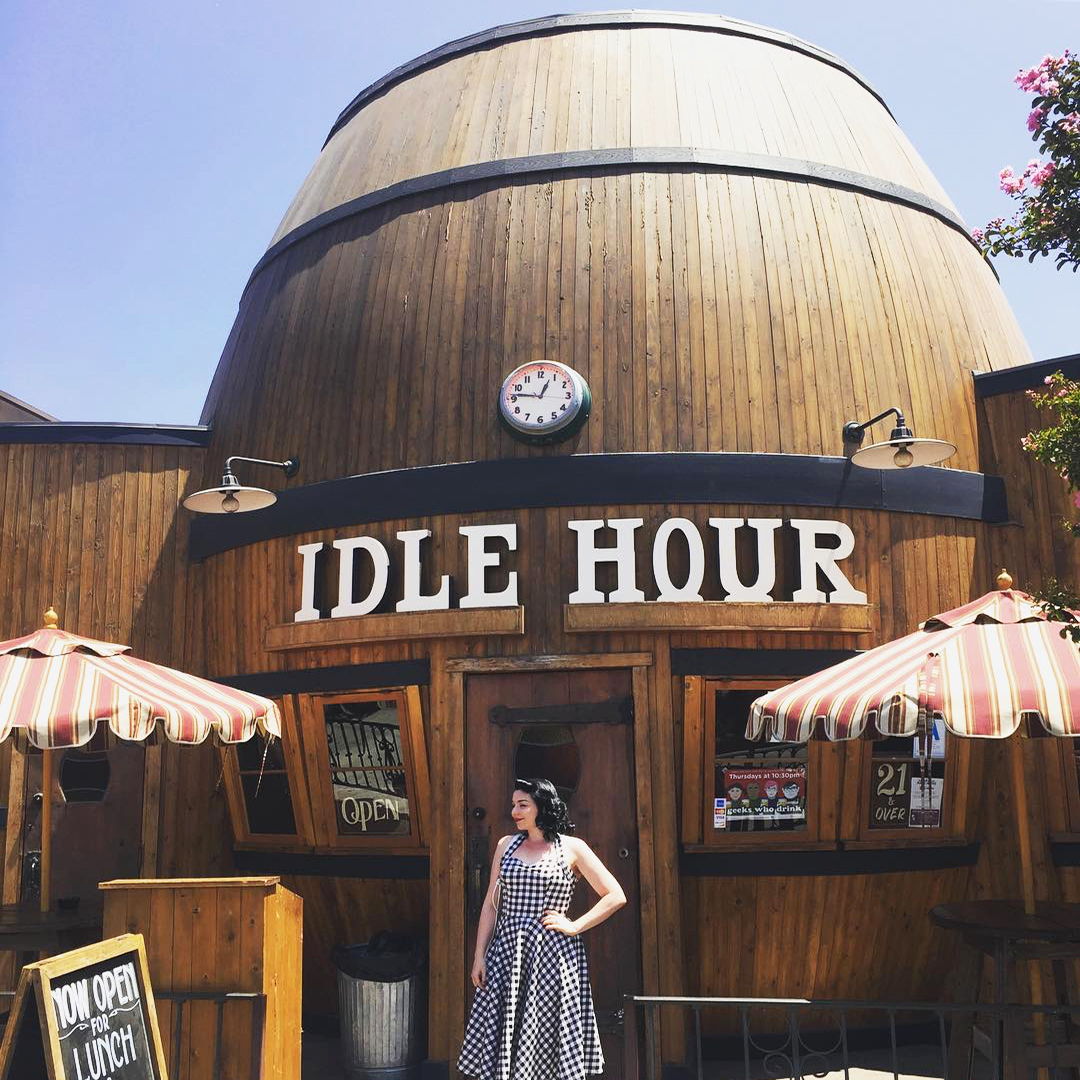 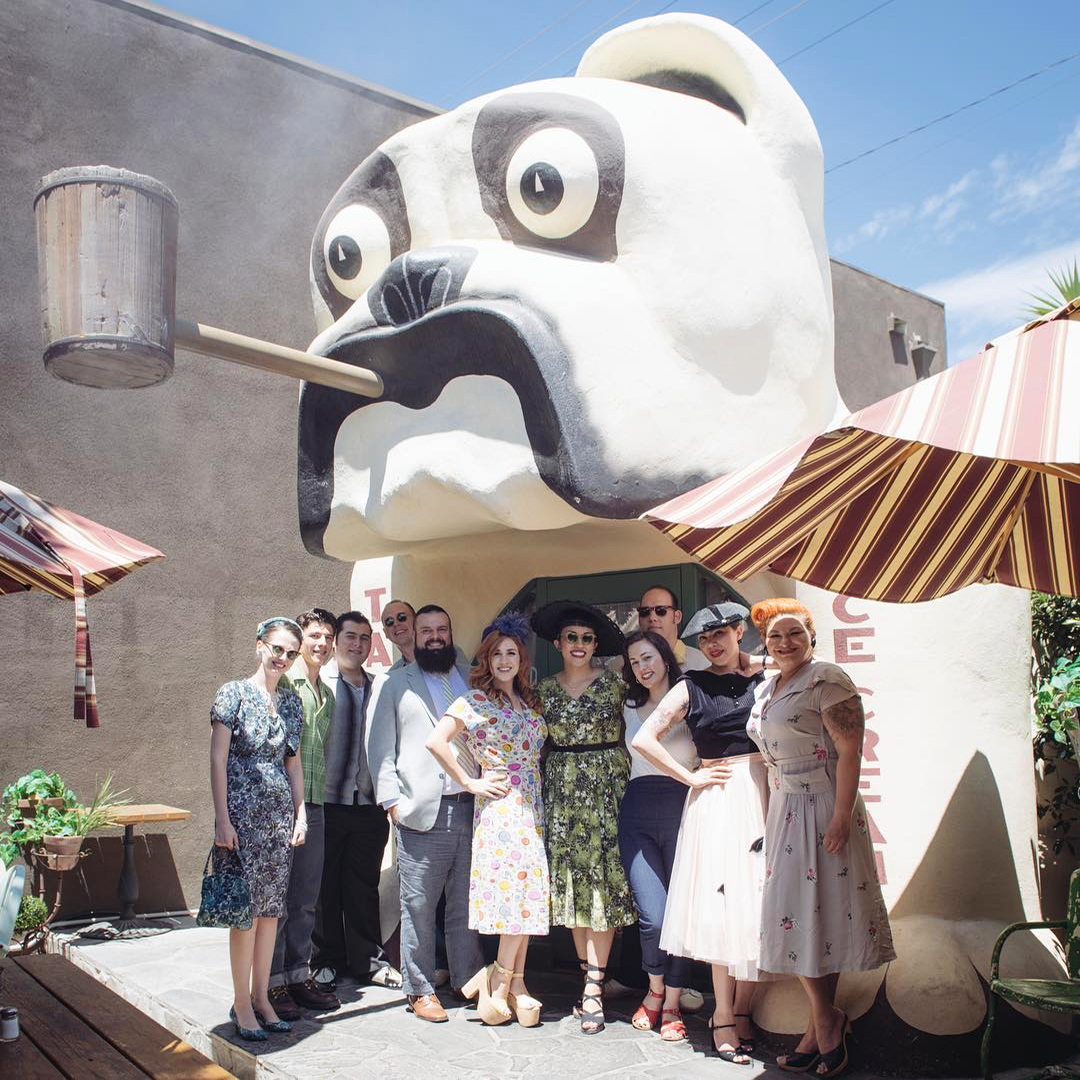 Griffith Park
Make like you’re in an episode of Lost and hang out in the creepy old cages and caverns that once held monkeys, lions, zebra, kangaroos and even polar bears. Erected in 1912, the Griffith Park Zoo was to be “the world's most natural and unique zoo.”  Although it had its moments of popularity, the zoo had many issues: monkeys escaped and vandalized Griffith Observatory,  penguins suffocated on chlorine fumes, animals died under bizarre circumstances (a leopard died of fright …) and a polar bear, aptly named Ivan the Terrible, brutally murdered three other polar bears. Ultimately, charges of neglect came down in the 1950s but it took until 1966 for the animals to be moved to what is now the Los Angeles Zoo. 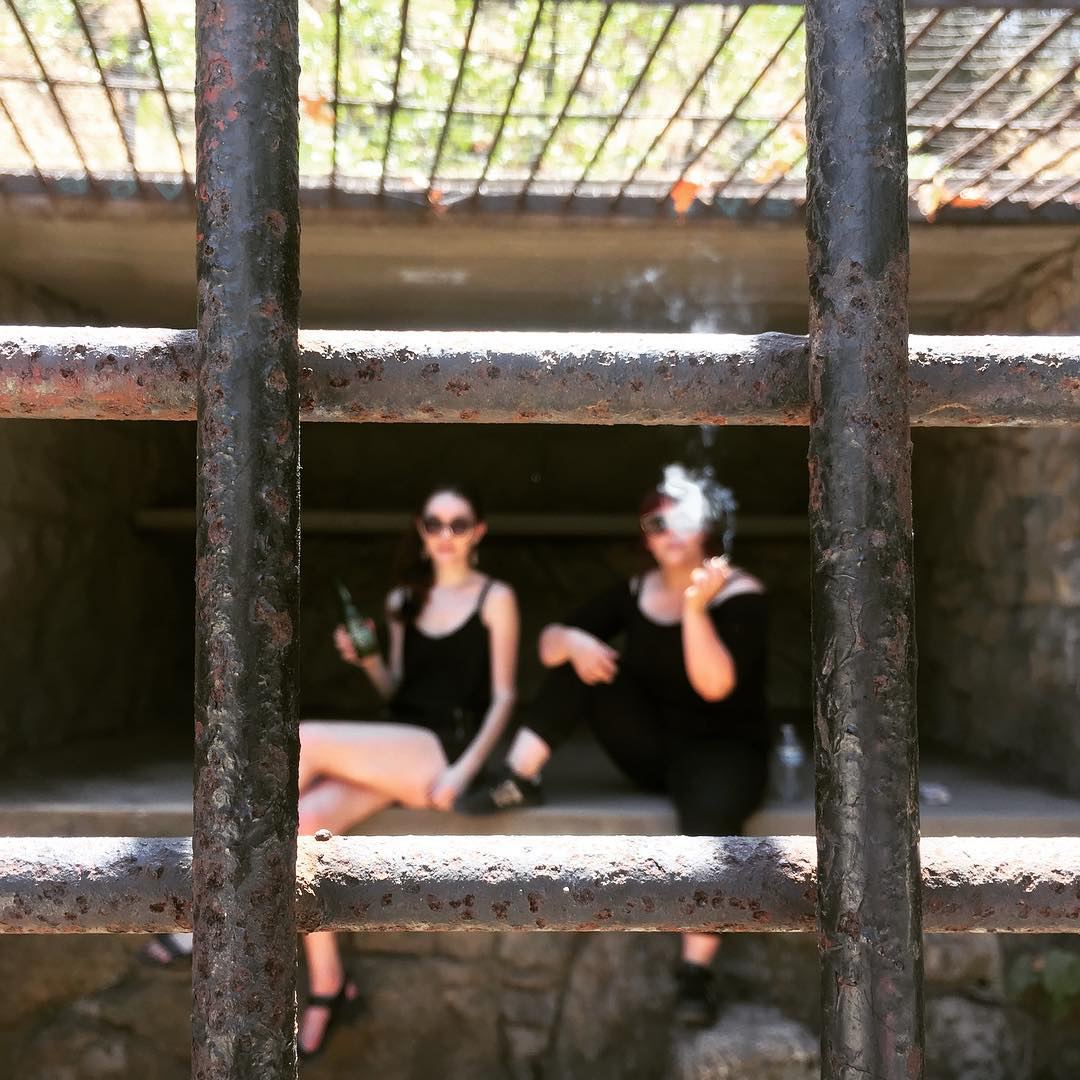