Where to get your hands on the best wieners in town...and we don’t mean Ron Jeremy’s.

Wiener, bratwurst, hot dog, frankfurter, banger, snag, or kielbasa. Whatever you call them, who doesn't love to smother 'em in condiments and chow on down. Here at Citizine, we are big fans of the almighty sausage, be it meaty or vegan.
Meet our food-obsessed staff as they dish on the best hot dogs in Los Angeles for some mustard-drenched, cheese-and-onion-baptized links of heaven.
Get Citizine Updates Here

Pico-Robertson, $$
Arden Shore: Jeff’s is super old school and super LA. YA GOTTA get the jumbo kosher dog (I think it's only 3 or 4 bucks.) Just a simply delicious dog.

DTLA Arts District, $$
AS: Expensive but worth the hype. Try the fun flavors like rattlesnake and duck. And never skimp out on the fries.

Sawtelle, $$
AS: Super juicy. Try the spicy pork sausage and definitely get the flaming rice balls on the side to split.

Venice, $
AS: On the Venice boardwalk. A classic! This one has been around for decades. 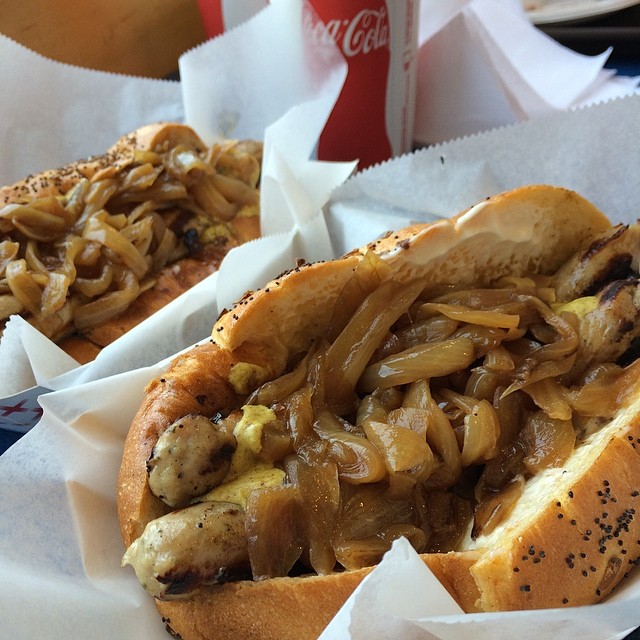 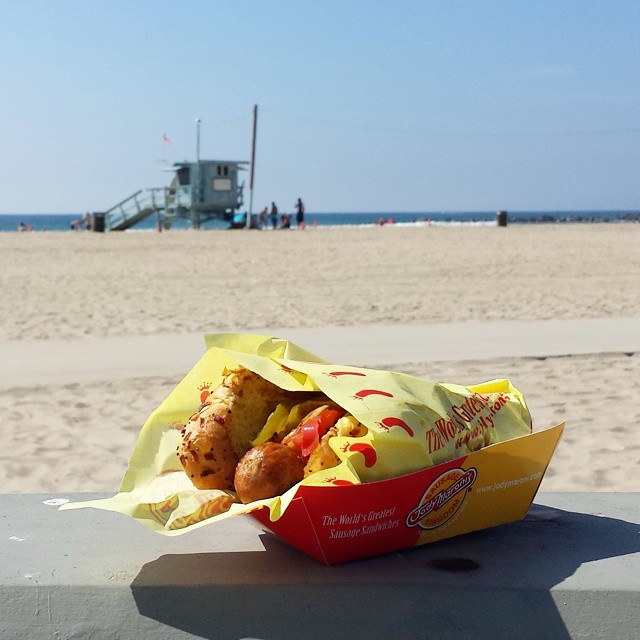 Pasadena, $
Paige Barnett: Cozy (as in physically small) but a very popular, local spot. Friendly owners. Quality ingredients. Always tasty. They have crossover mashups that seem like they wouldn't work at all, but end up being a tastebud explosion, like the O.G. Thai Slaw Dog.

Sunset Strip, $
PB: Hot dogs. Served in a train. Loaded. Like 5 different ways. Is there any more to say?

Pasadena, $
PB: If Berlin and Los Angeles had a baby, this is what you'd get. Do the Soooo Cali with arugula and no cheese—when you're watching your waistline. Those calories don't count.

Burbank, $$
PB: This location used to be Papoo’s—an iconic Toluca Lake mom-and-pop hot dog stand. So this particular Umami serves high-end gourmet dogs in homage to its roots. Take any burger on the menu and make it a dog. Mmmmm. 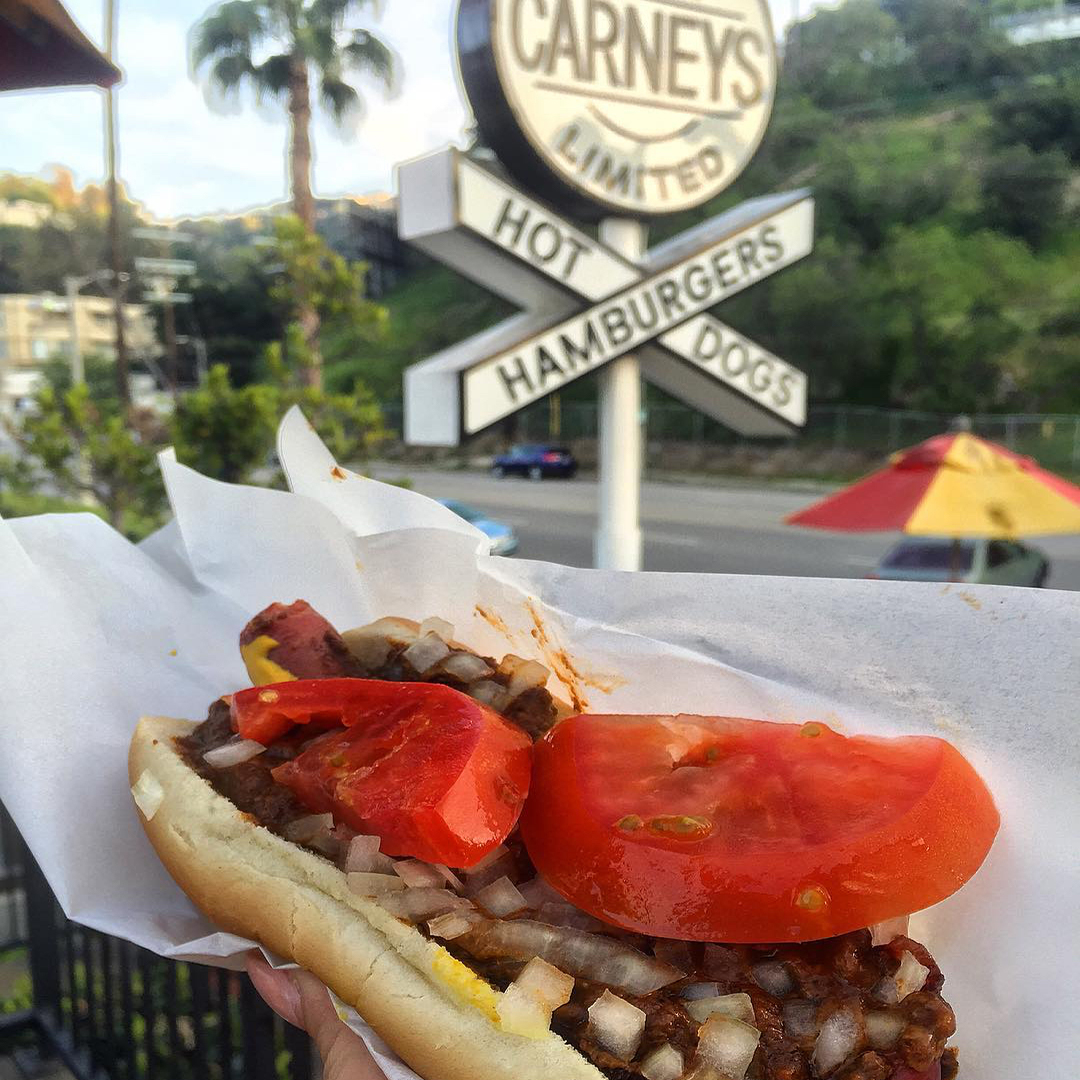 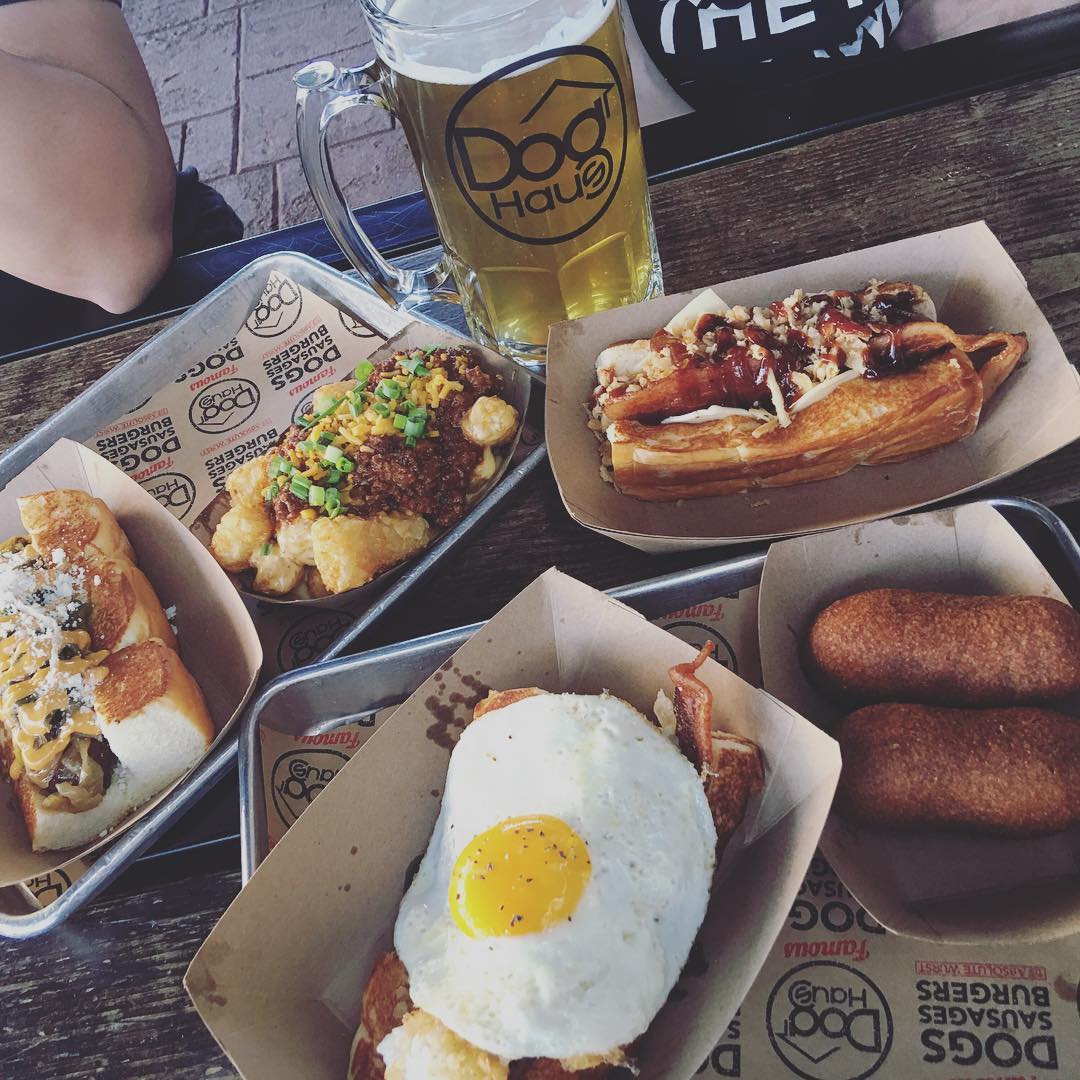 Little Tokyo, $$
Chris Kwon: These guys won the Food Network’s food truck challenge. They have two locations and their Korean fusion dogs are so good. But it’s their rice balls that are the bomb.

Venice, $$
CK: Beers and brats, what’s not to like. I usually swing by the one in Venice. 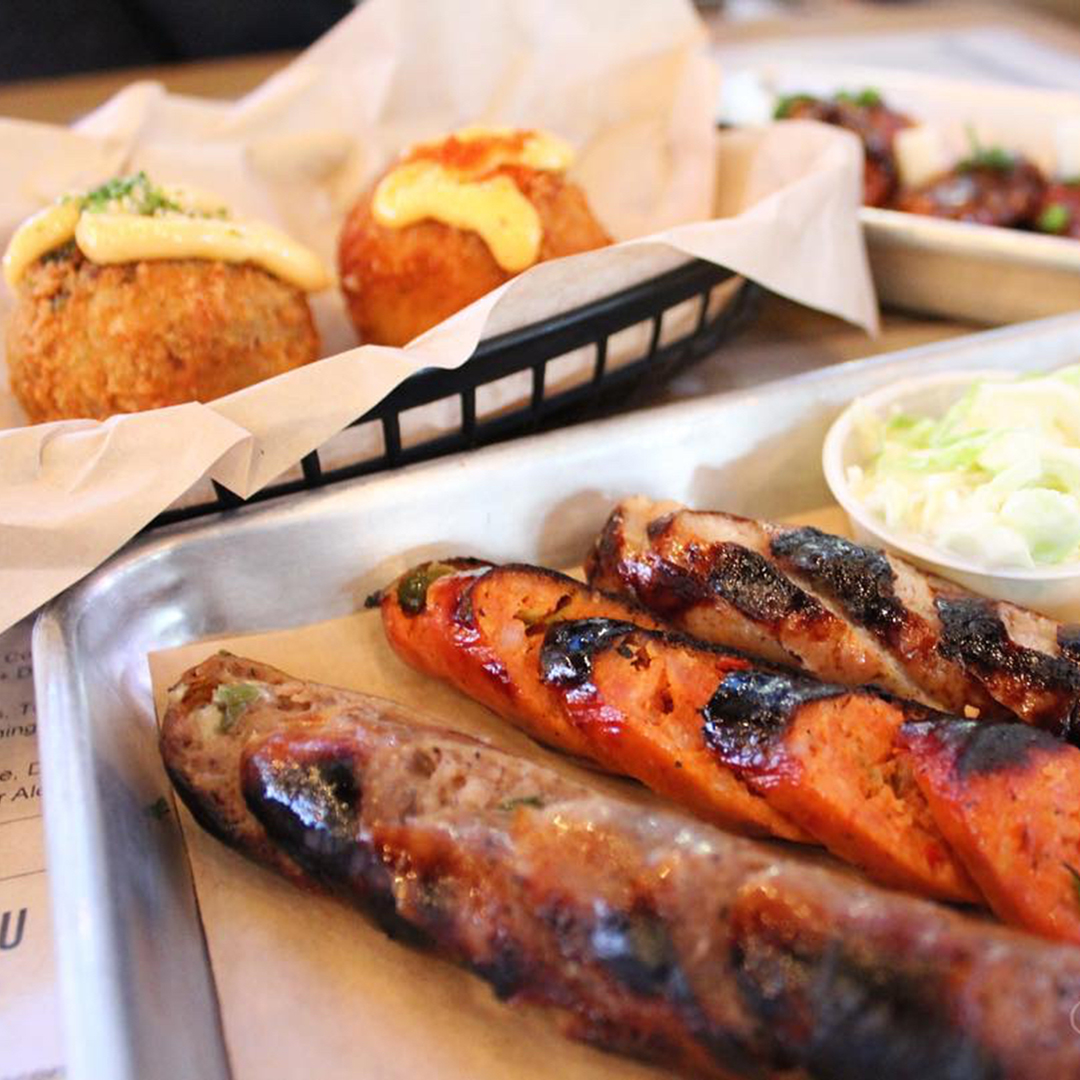 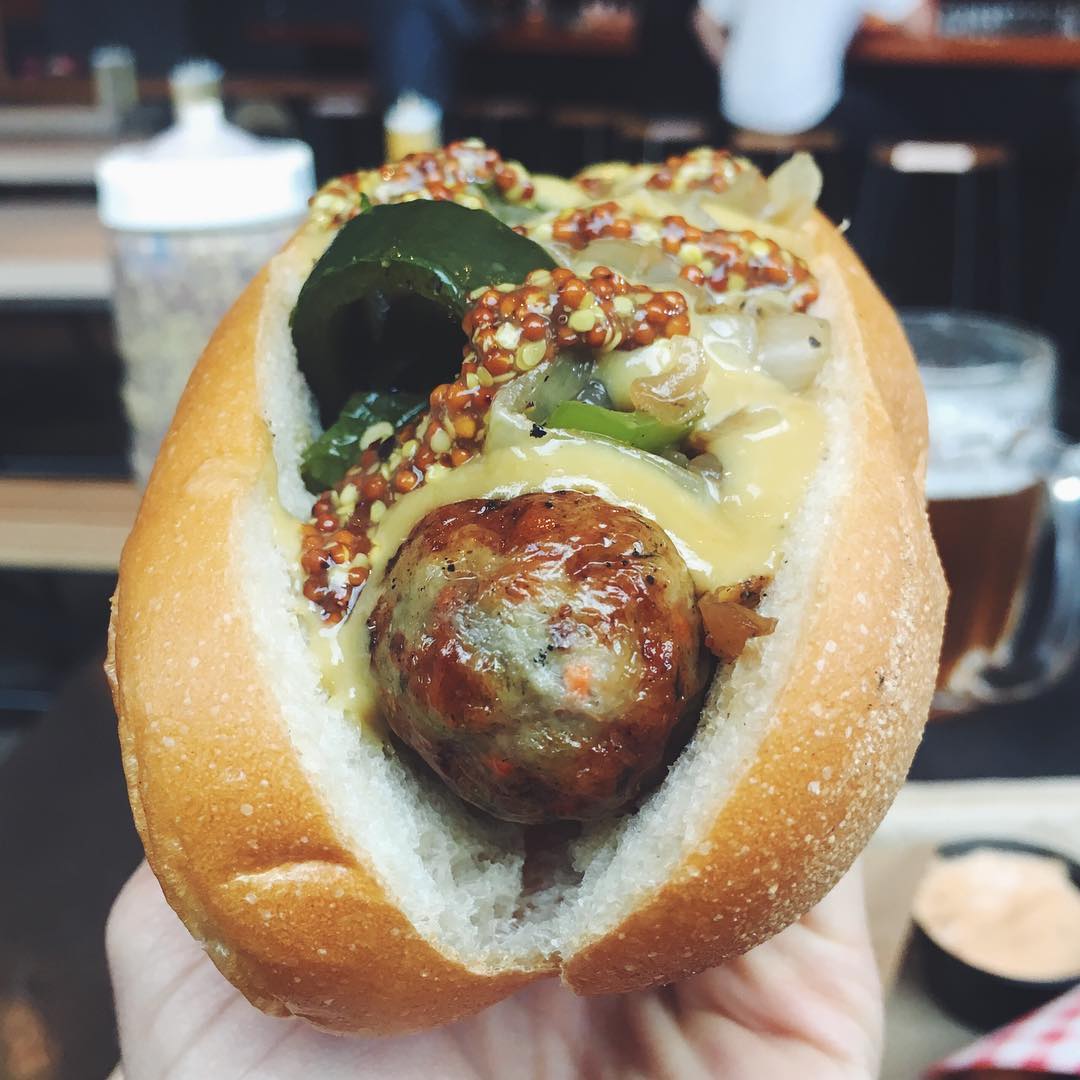 Fairfax, $
Justin Wagner: At 76yrs old, Pink's is one of those generational LA institutions that our parents get, and we just go with the flow really. If your eyebrows raise, cheeks cringe, and you catch yourself murmuring "uhh" then yes, you should probably order it.

Dodger Stadium, Elysian Park, $$
JW: Whether you're dodging the traffic, a ball, or the popular LA vegan/veggie diets, nothing hits the spot quite like a Dodger Dog at a Dodger game. Load it up with ketchup, mustard, onions and complement it with a beer and garlic fries, and you’re almost a True Blue Dodger fan. 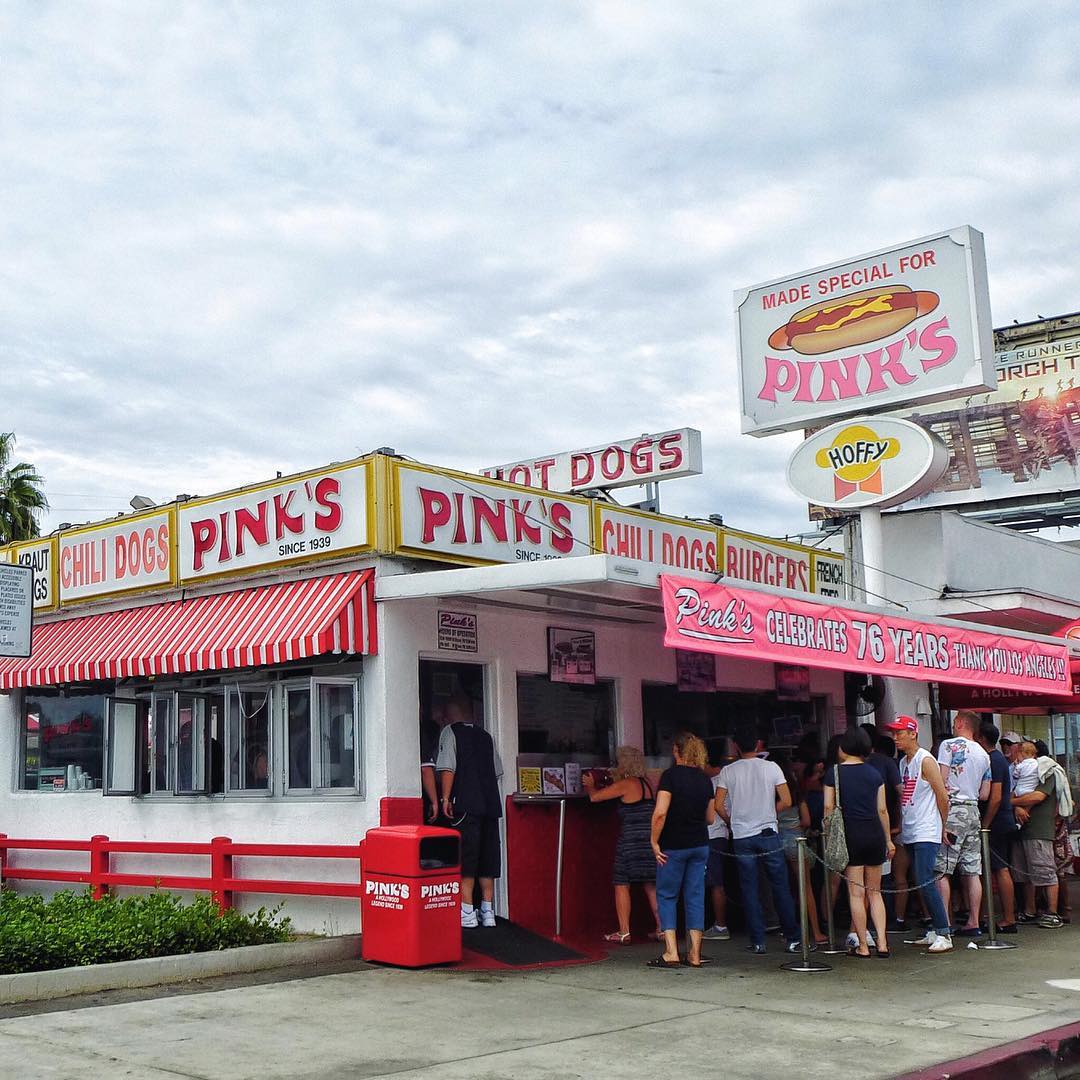 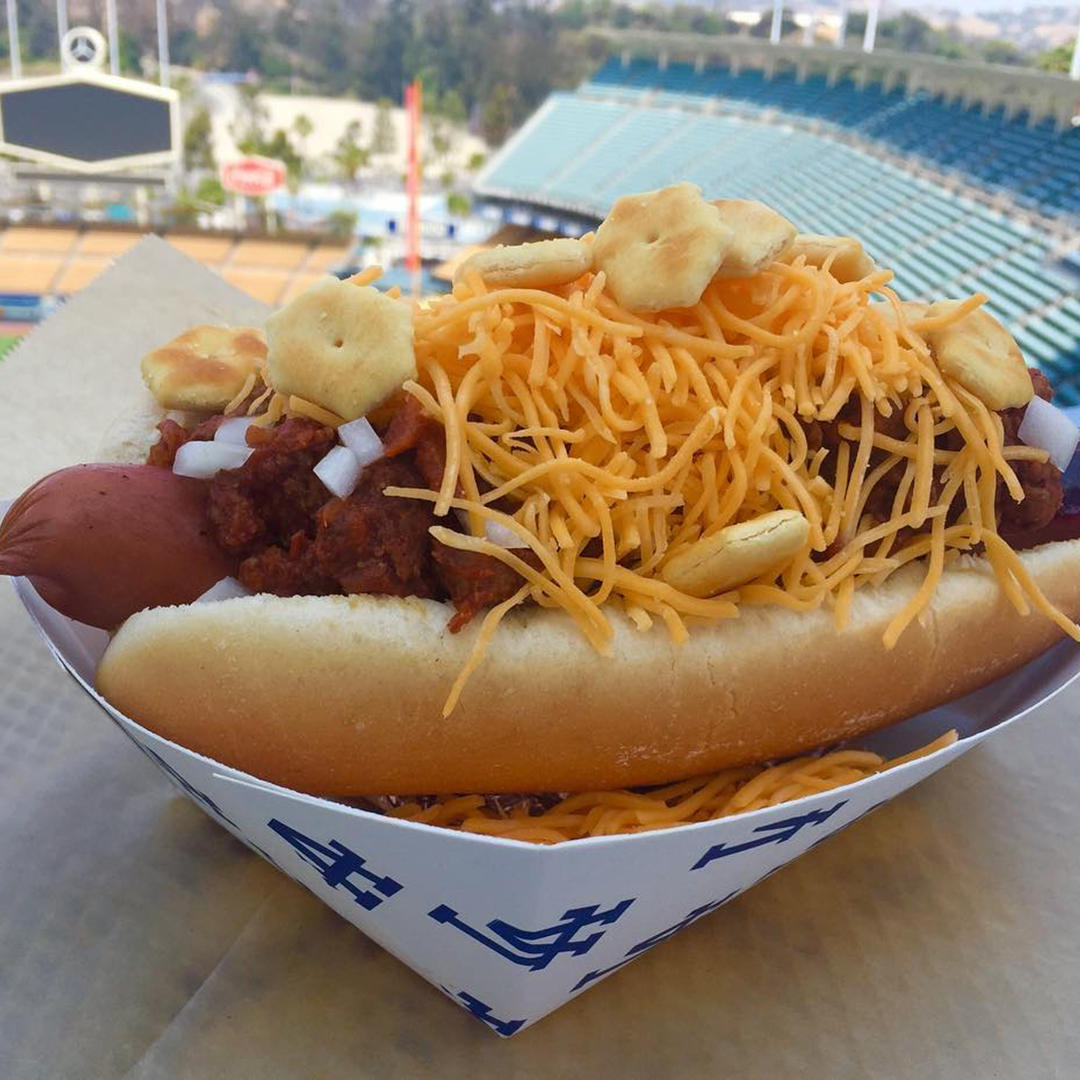 Farmers Market, $$
Lanee Lee: I avoid carrots like the plague, but Fritzi's vegan hot dog (carrot subs as wiener and then topped with charred brussel sprouts) has won me over. So weird. So good. And it’s actually healthy...I think?

Fairfax, $
LL: This is a hybrid dog of Herculean proportions: a burrito stuffed with two franks, chili, pastrami, American cheese and mustard. Put one of these back and plan on planting yourself in the nearest hammock ‘till day’s end.

STAPLES Center, DTLA, $$
LL: Coming from one of LA’s most famous fine dining chefs that specializes in French inspired food, it’s no surprise the buns on Josiah Citrin's dogs are worth every buttery bite. My favorite is the California dog slathered with the chef’s own chili recipe. 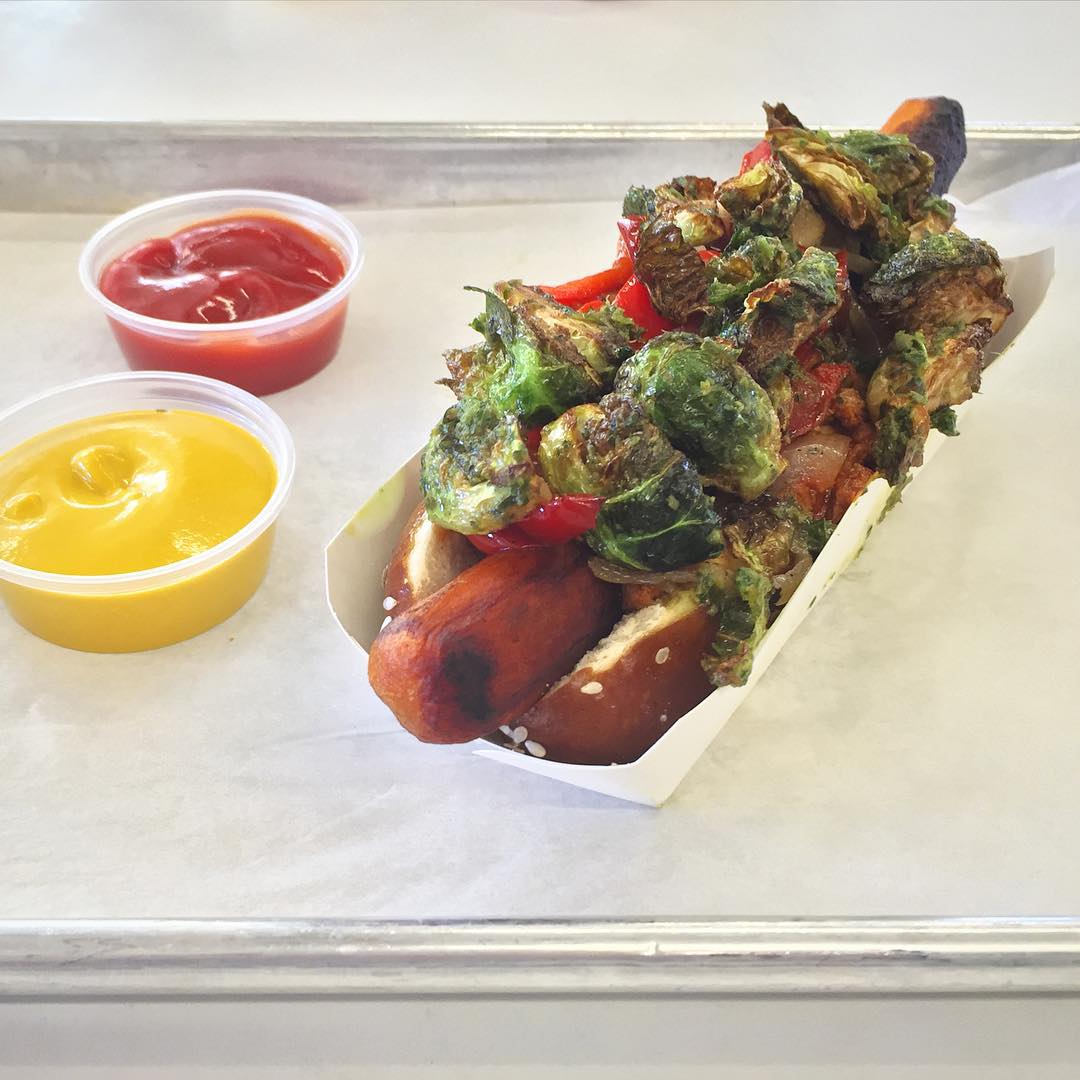 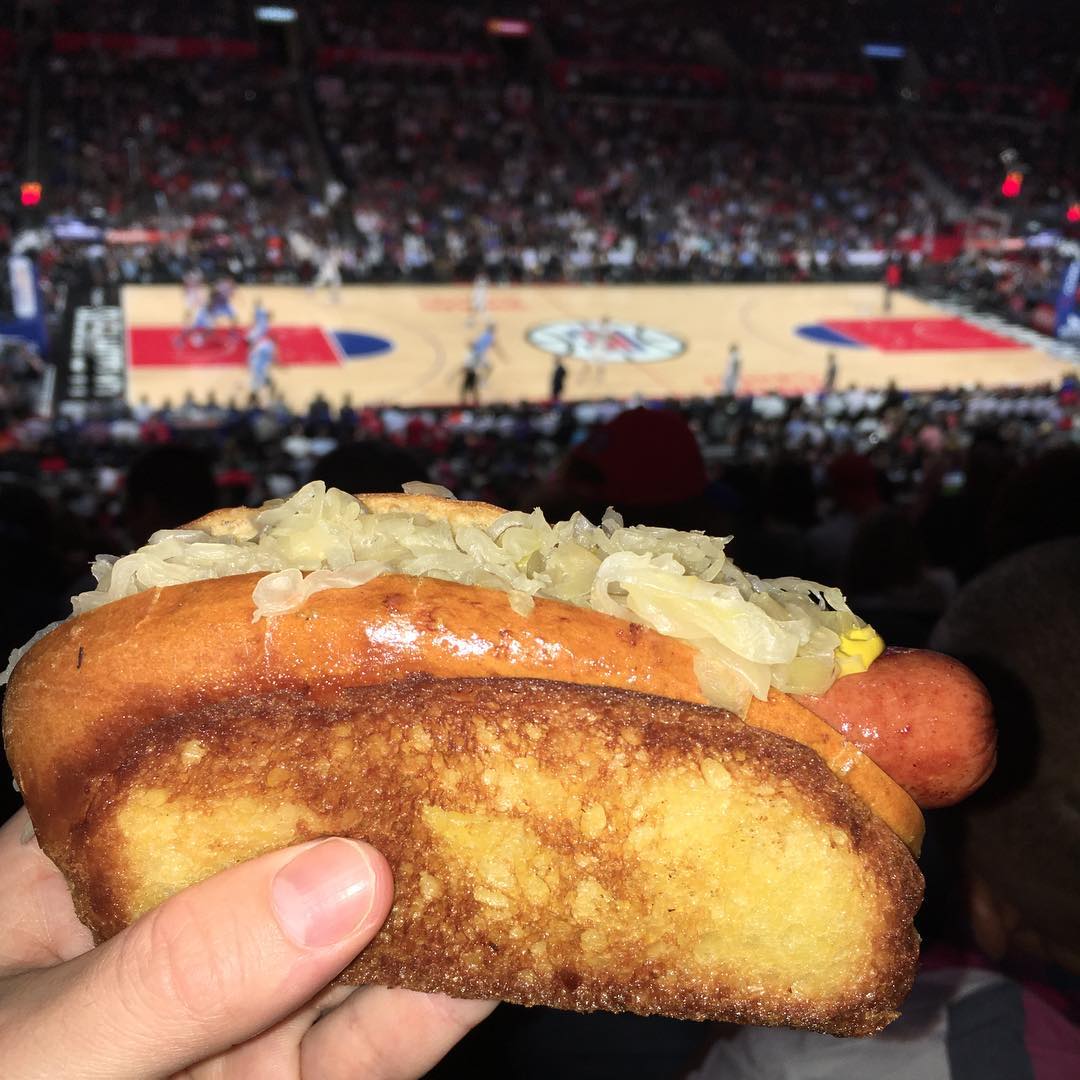 Grand Central Market, DTLA, $
MK: I’ve spent way too much time wandering around the streets of Europe, eating street meat. And this place reminds me of that. The perfect flavor memories of Germany and Austria.

Northridge, $
MK: Super old school! They have a real bite to them that’s awesome. I somehow survived eating a lot of their chili dogs in high school.

Dodger Stadium, $$
MK: I tend to mostly eat hot dogs when I'm at Dodger Stadium, so it’s kind of a special occasion. But only the all beef and only grilled with a shit ton of deli mustard. It pleases my old-school Brooklyn-Jew soul. 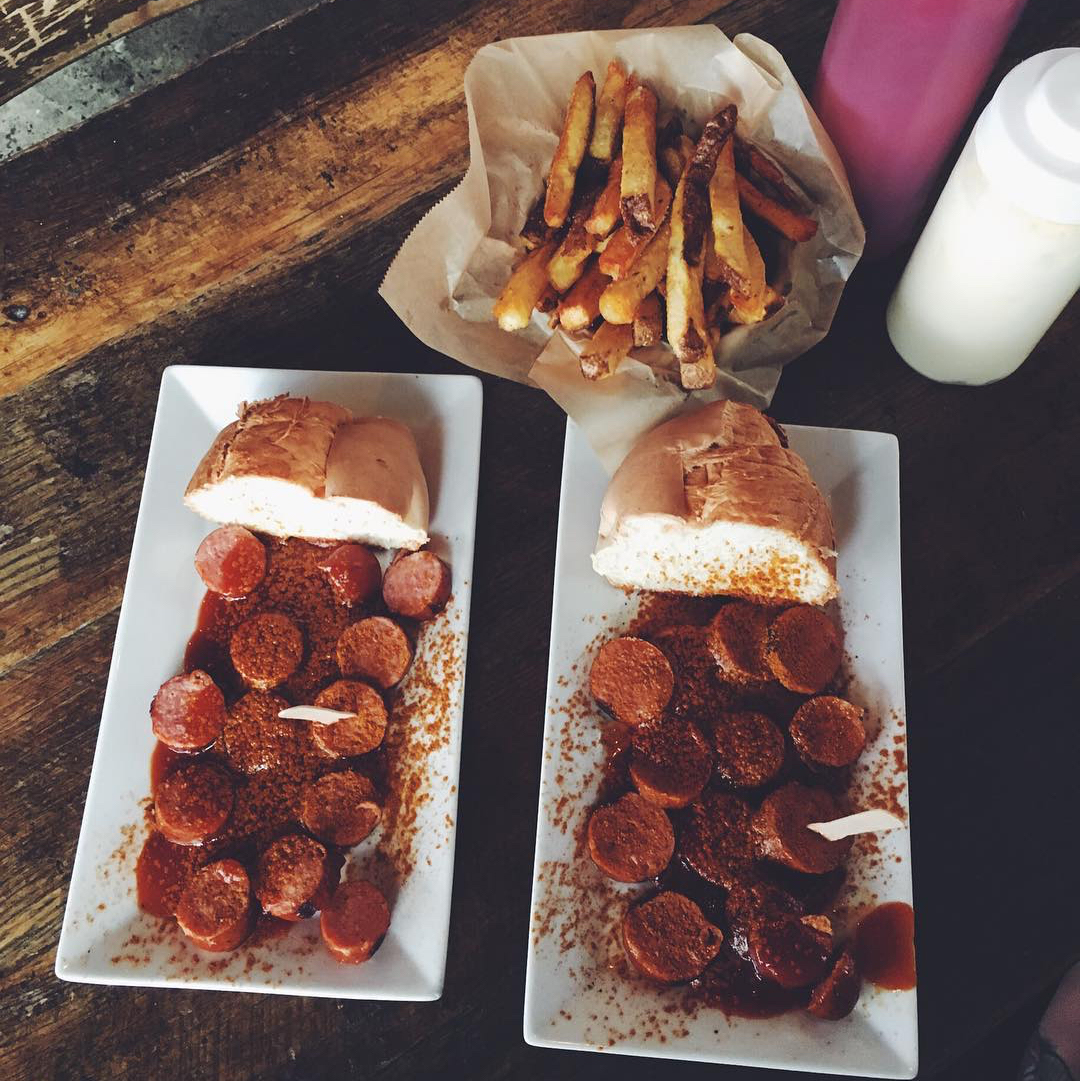 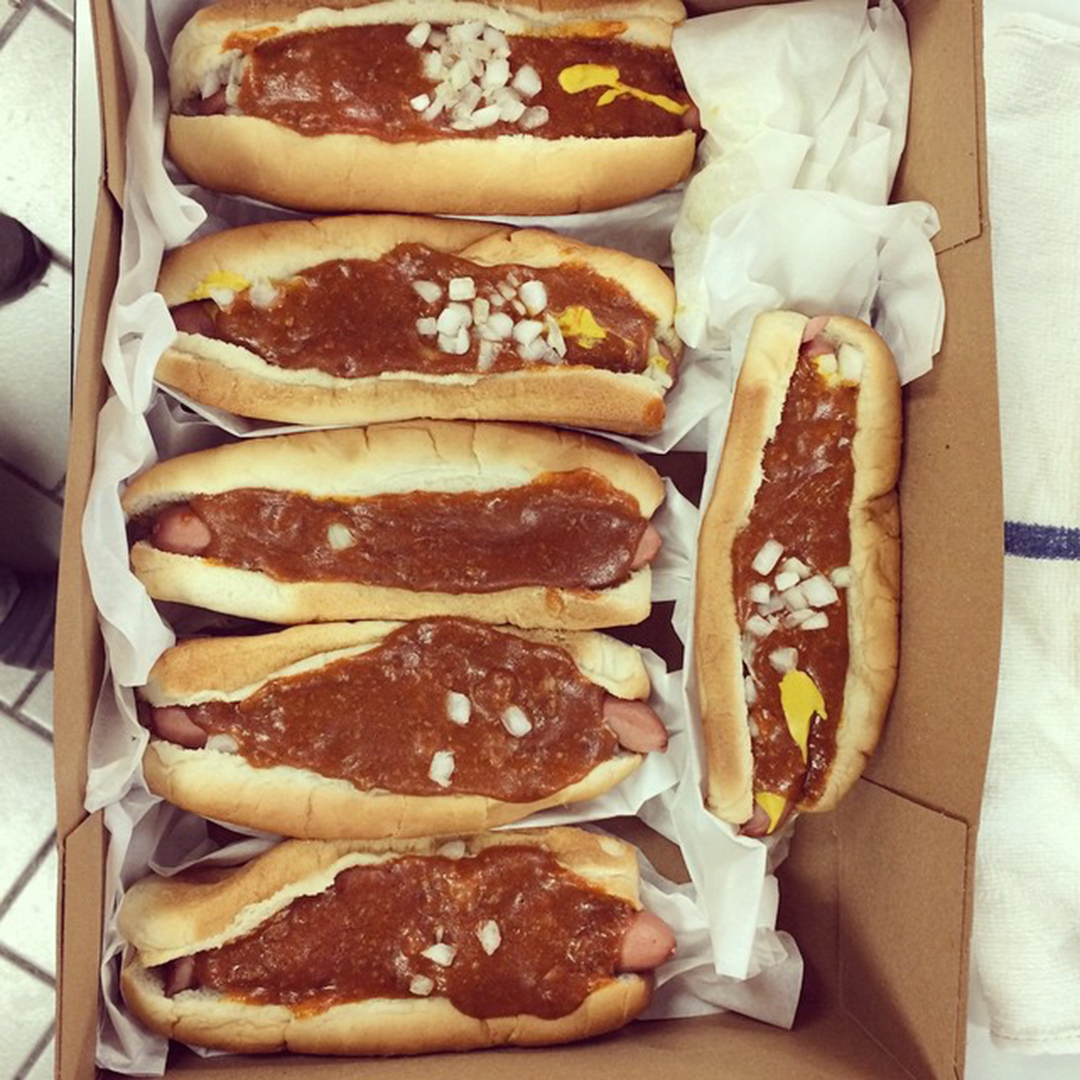 DTLA Arts District, $$
Belinda Gosbee: I’m pescatarian so anywhere with veggie wieners on the menu gets me super excited. It’s great to be able to throw back a beer and a dog with my meat-loving friends. Wurstküche’s Vegetarian Smoked Apple Sage dog is the bomb!

DTLA, $$
BG: Fritzi is right next door to The Arts District Brewing Co but has a window INTO the bar so they can cater for all your bar snack needs. The Fritzi carrot dog must be seen to be believed. It looks like a dog but it’s one big spiced carrot, topped with the most divine crispy Brussels sprouts.

Burbank, $$
BG: So many vegan dogs! There’s the Beer Brat, The Italian Stallion, The Mexicali but I love the Mango Apple dog (I have a serious weakness for mangos). It comes with mustard, slaw and juicy mango salsa.

Atwater Village, $$
BG: Another grand selection of vegan wieners but the best part is that you can get all of them if you order the platter, which will also score you fries. I love the simplicity of the Beerbrat — tofu, ale, onions and spices. Also order a dill pickle! 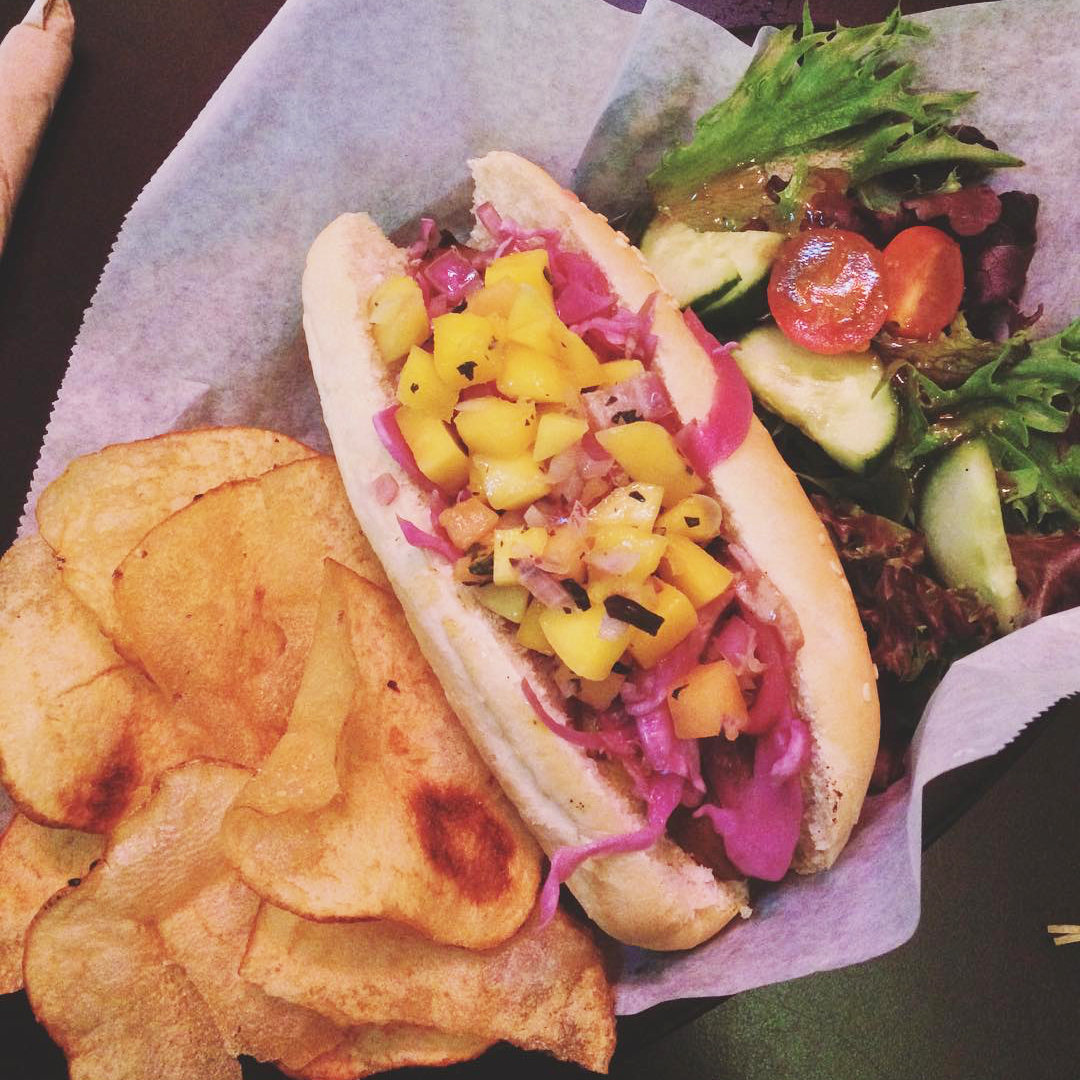 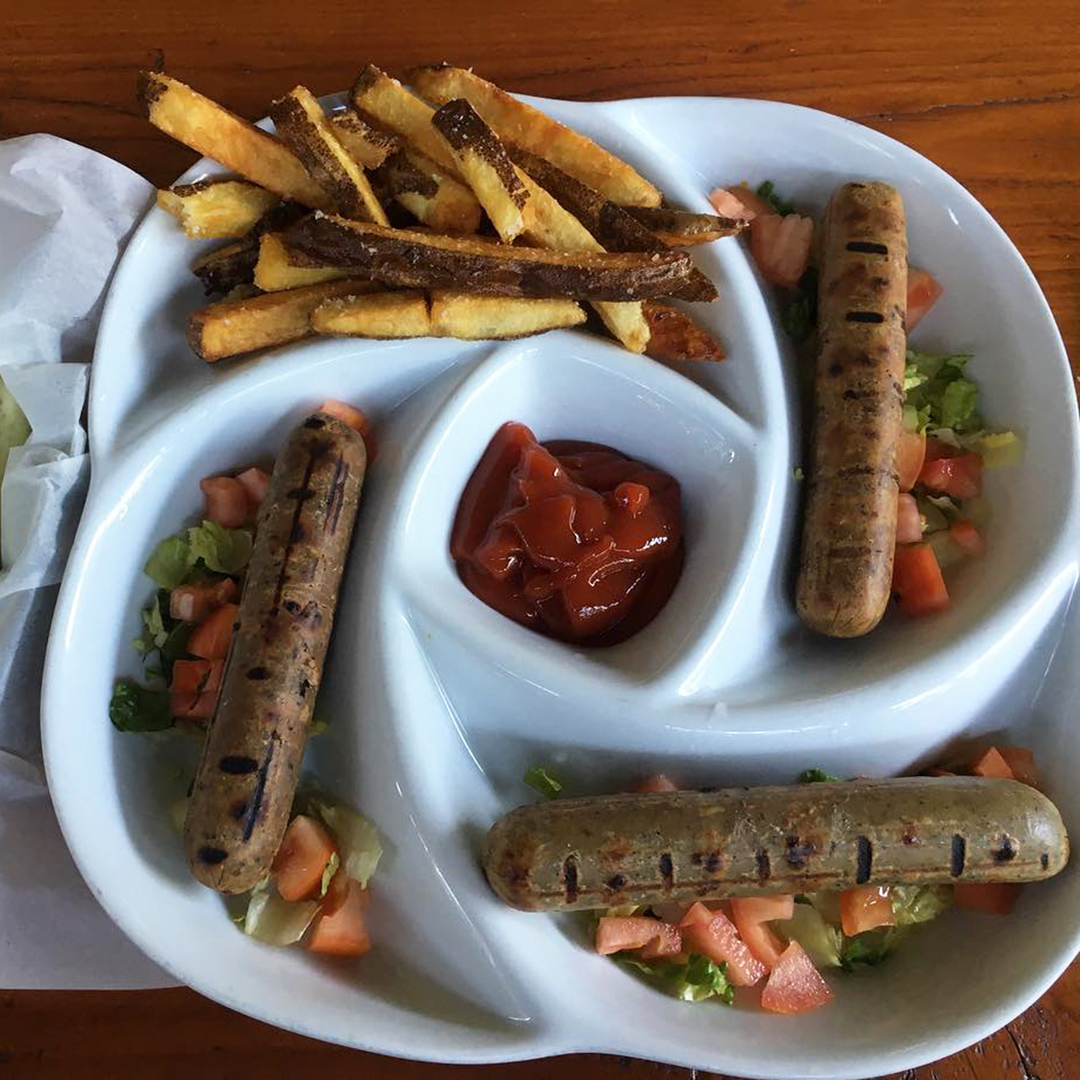