Where to eat and drink before, during and after the game, extreme Dodger dogs included

Opening Day: the only time of the year when bright-eyed fans can project their aspirations of winning the World Series onto a completely clean, Dodger Blue slate. This year, the Dodgers and their fans start the season with high expectations of bringing home a fourth consecutive division title, and with a well-balanced veteran lineup, it’s likely they will. Located in the Chavez Ravine, Dodger Stadium is the third oldest ballpark in the MLB and a cultural institution that Angelenos consider a home away from home. And what’s home without good cookin’?
Dodger Dog or a CPK pizza? That used to be the question … but no longer. Between trending nearby neighborhoods such as Silver Lake, Echo Park, DTLA and Chinatown, and the new food offerings at the stadium, game day eats are a whole new ballgame.
Legendary broadcaster Vin Scully— who has been calling Dodger games since 1951—once described the magical aura above Dodger stadium as: “A cotton candy sky with a canopy of blue—looks good enough to eat.”
So next time those cotton candy skies make your mouth water, know that the Chavez Ravine and its surroundings have got you covered in the food department. Whether you want something in walking distance or you’re taking the Dodger Stadium Express from Union Station, here’s where to grub and drink before, during and after we take home that W.
Get Citizine Updates Here 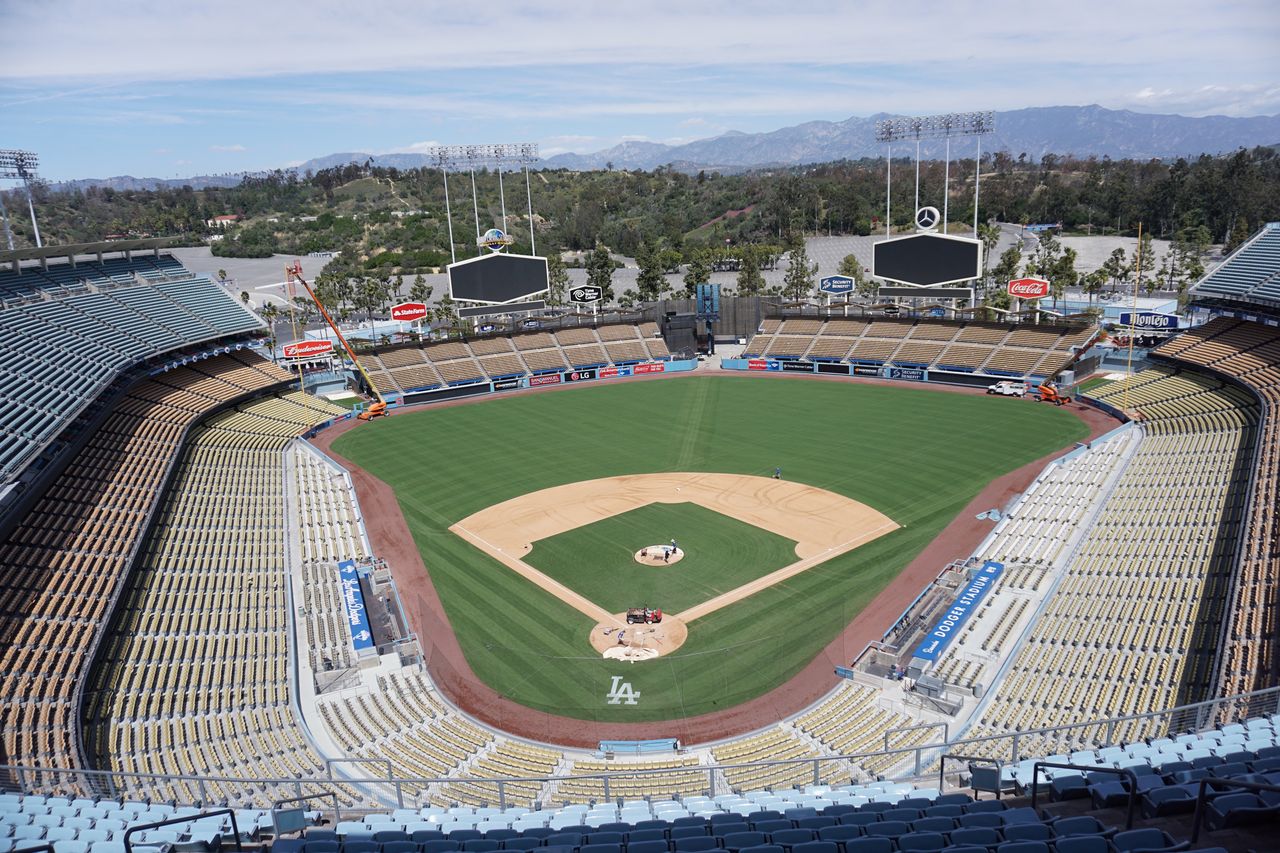 Chinatown, $
Phillippe’s is as classic as it gets for a Dodger culinary experience. Famous for founding the French Dip sandwich (some would argue), Philippe has been a DTLA institution since 1908, and at their current location since 1951. An old school walk-up counter with servers or “carvers” as they’re called, provides a retro feel complete with coconut cream pie.
Park near Philippe the Original, walk to Union Station and take the Dodger Express up to the stadium to avoid a parking lot headache. 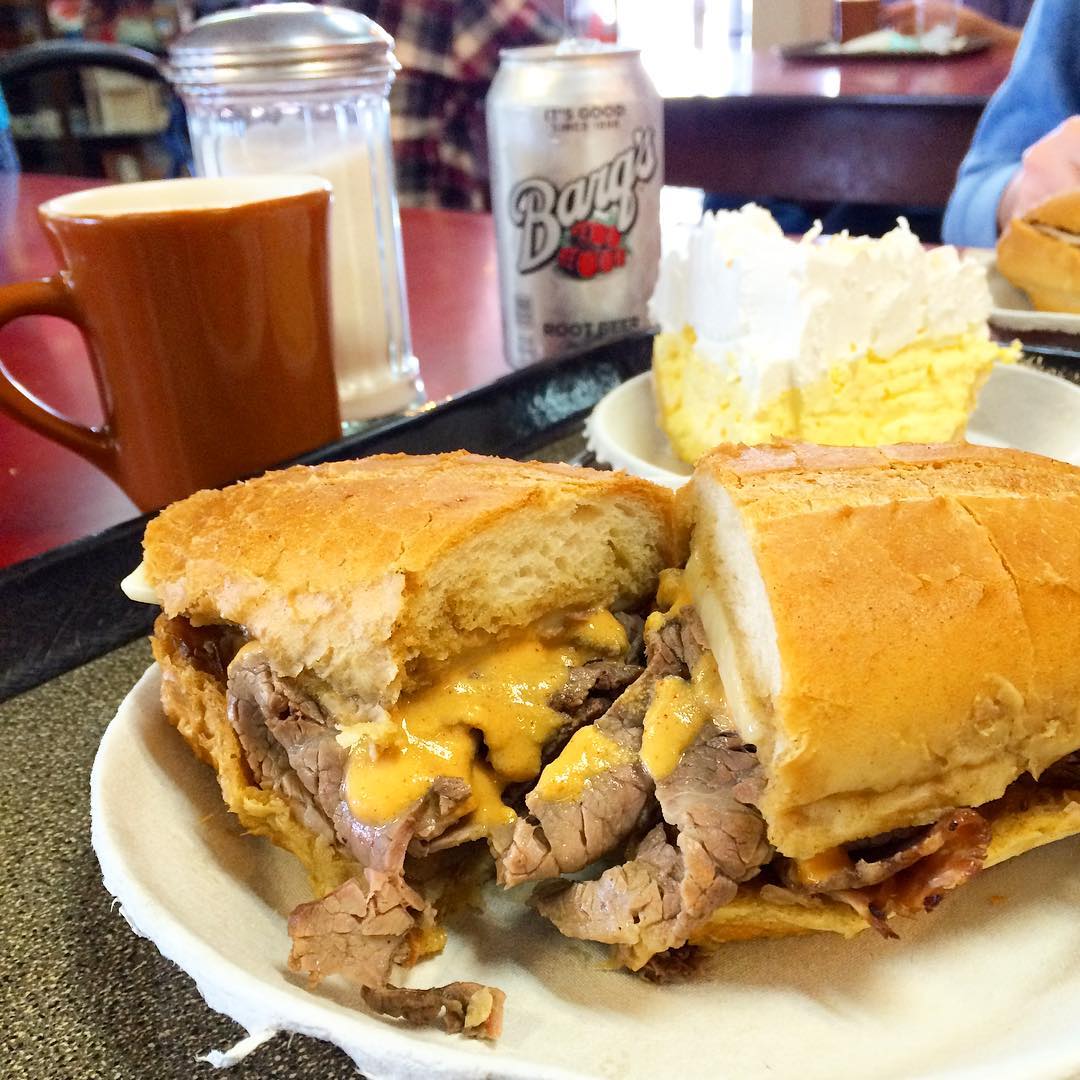 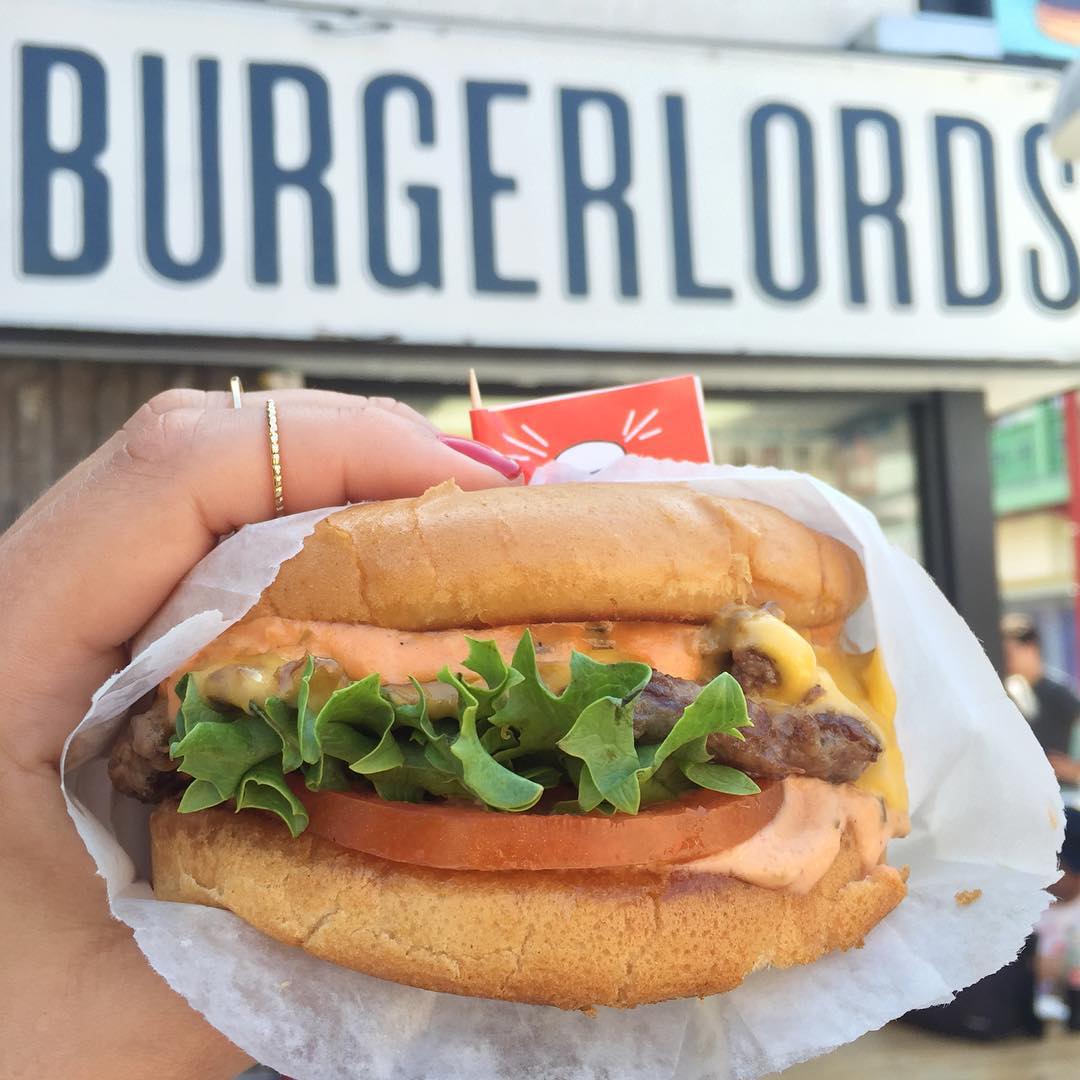 Chinatown, $
Located in Old Chinatown Central Plaza, this outdoor-seating-only burger joint opened up in late 2015. The menu’s simplicity is reminiscent of In-N-Out with the exception of the Housemade Vegan Burger. This is a great option for carnivores not looking to eat a Carl’s Jr. burger during the Dodger game.

Chinatown, $
Opened in 1929, this a low key deli staple in the Chavez Ravine. If you’re in the neighborhood early, as they close at 4 p.m. weekdays and 3 p.m weekends, and can squeeze in a hot or cold Italian sub before the game—do it. 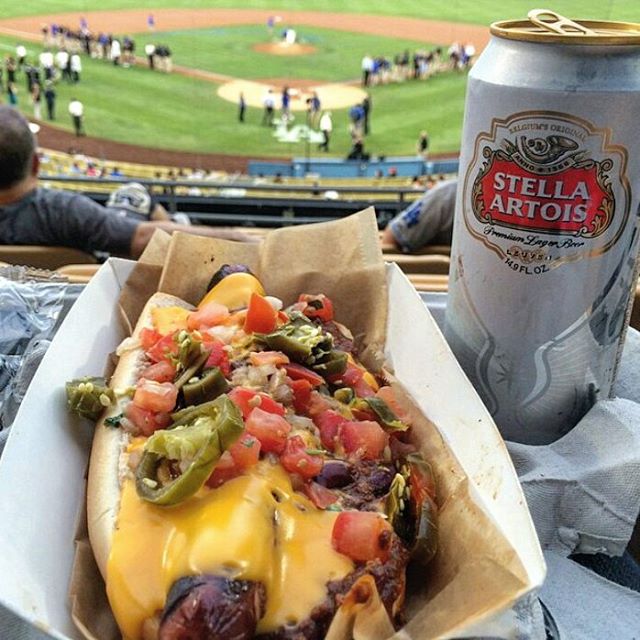 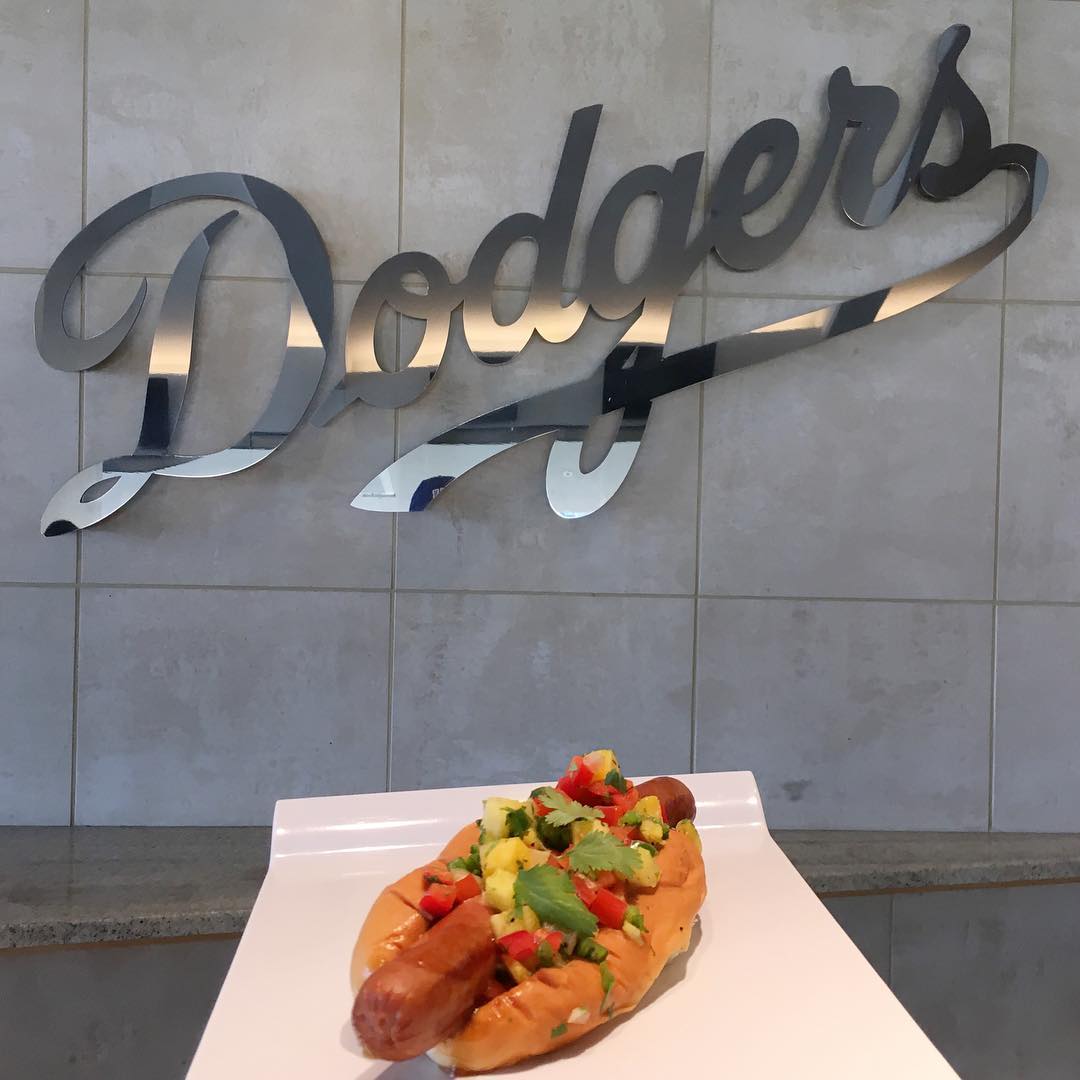 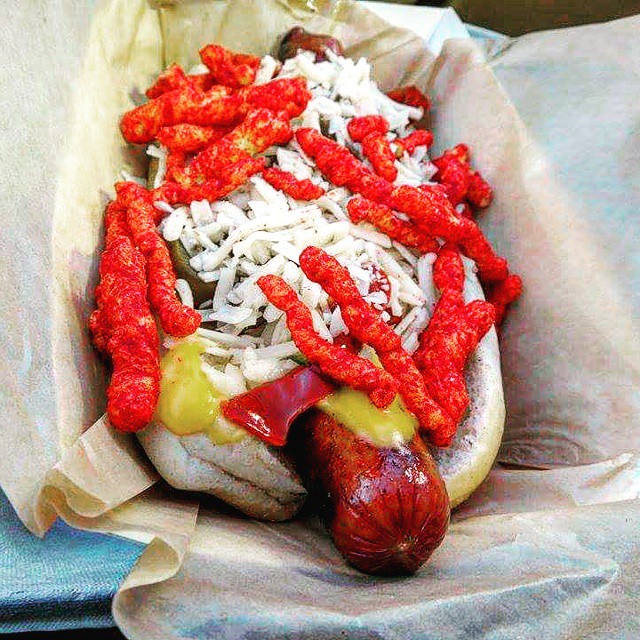 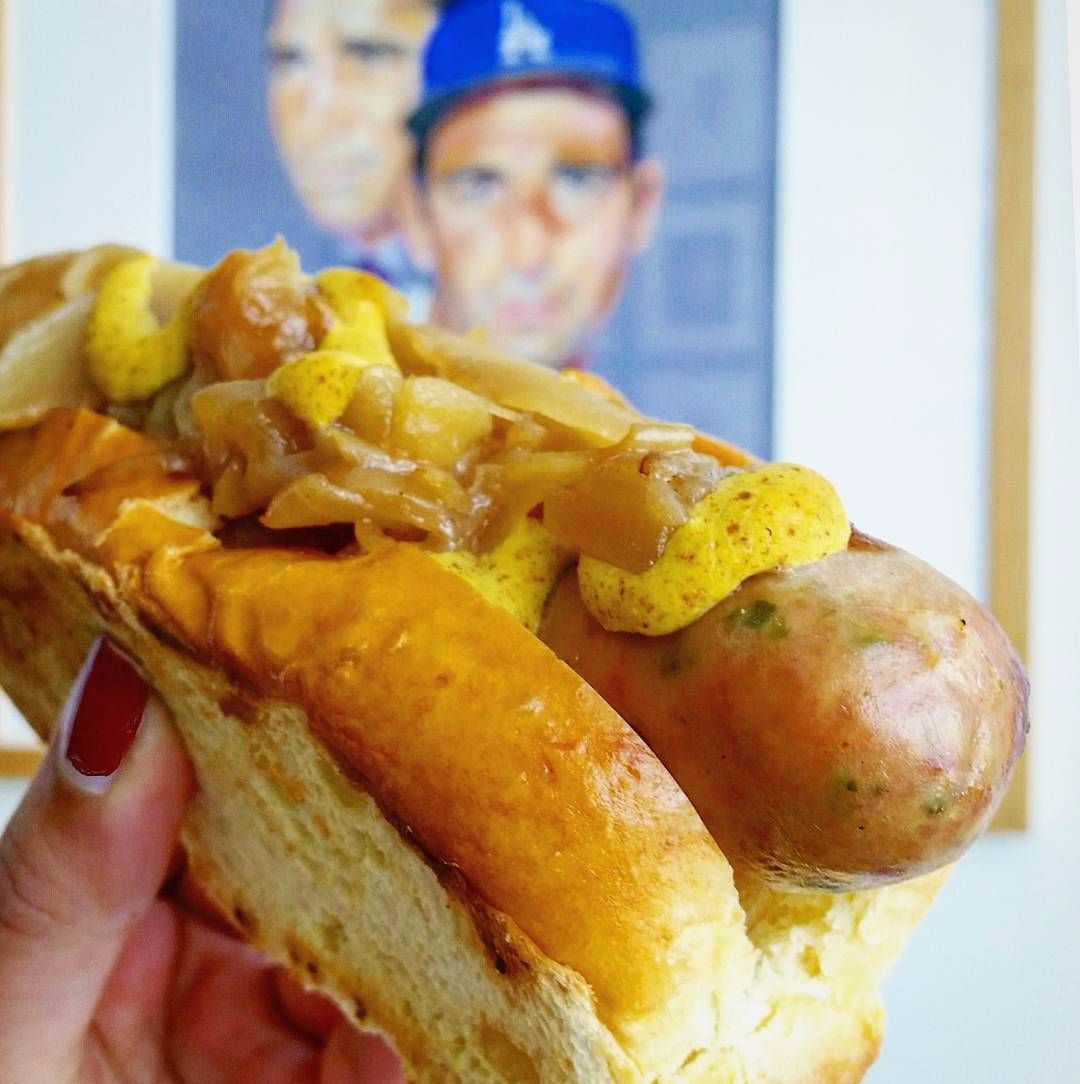 Right Field Pavilion, $$
Stop here for extreme Italian, from the chicken parm sandwich to a meat version of an ice cream cone. Be forewarned, if you dare to tackle the marinara meatball fries, be prepared for uncontrollable ‘Mama mia!’ utterances. 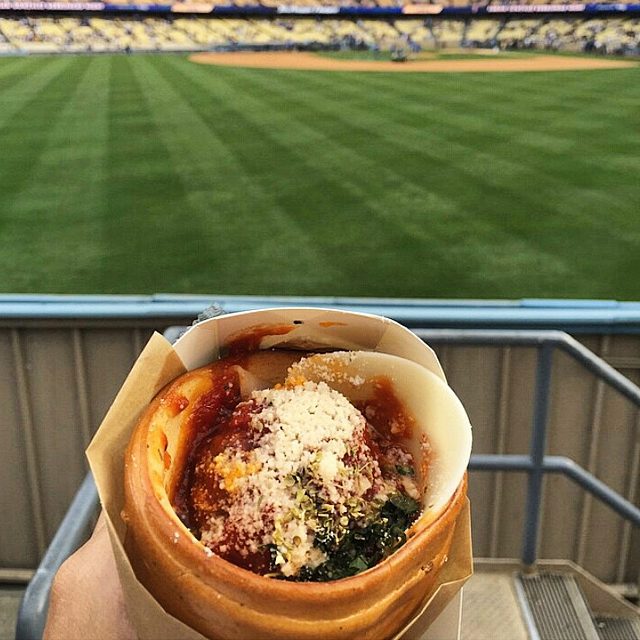 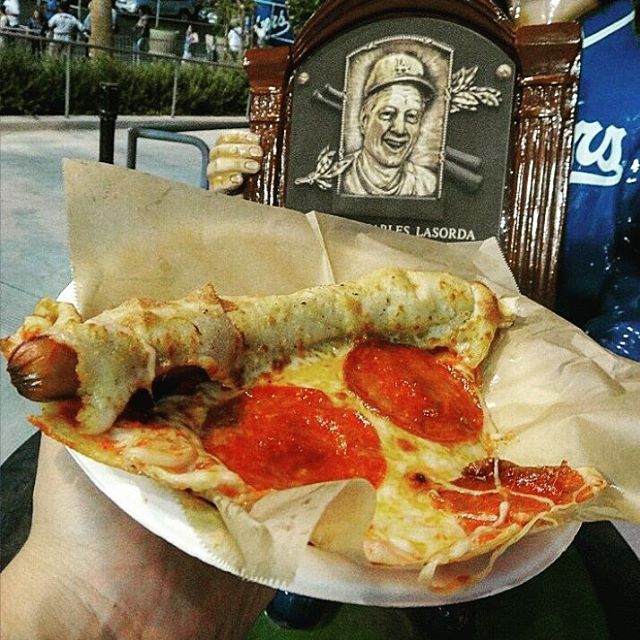 Left Field Pavilion, $$
To fill out your nine-inning dose of baseball, Dodger dogs, beer, and peanuts, be sure to check out Think Blue BBQ, where Chef Jason Tingley uses hickory wood and oak wood to grill up some delicious sandwiches, brats and wings. Don’t miss the elote (a Mexican street food staple of grilled corn-on-the-cob slathered in mayo, cheese and chili powder) or BBQ brisket sandwich. 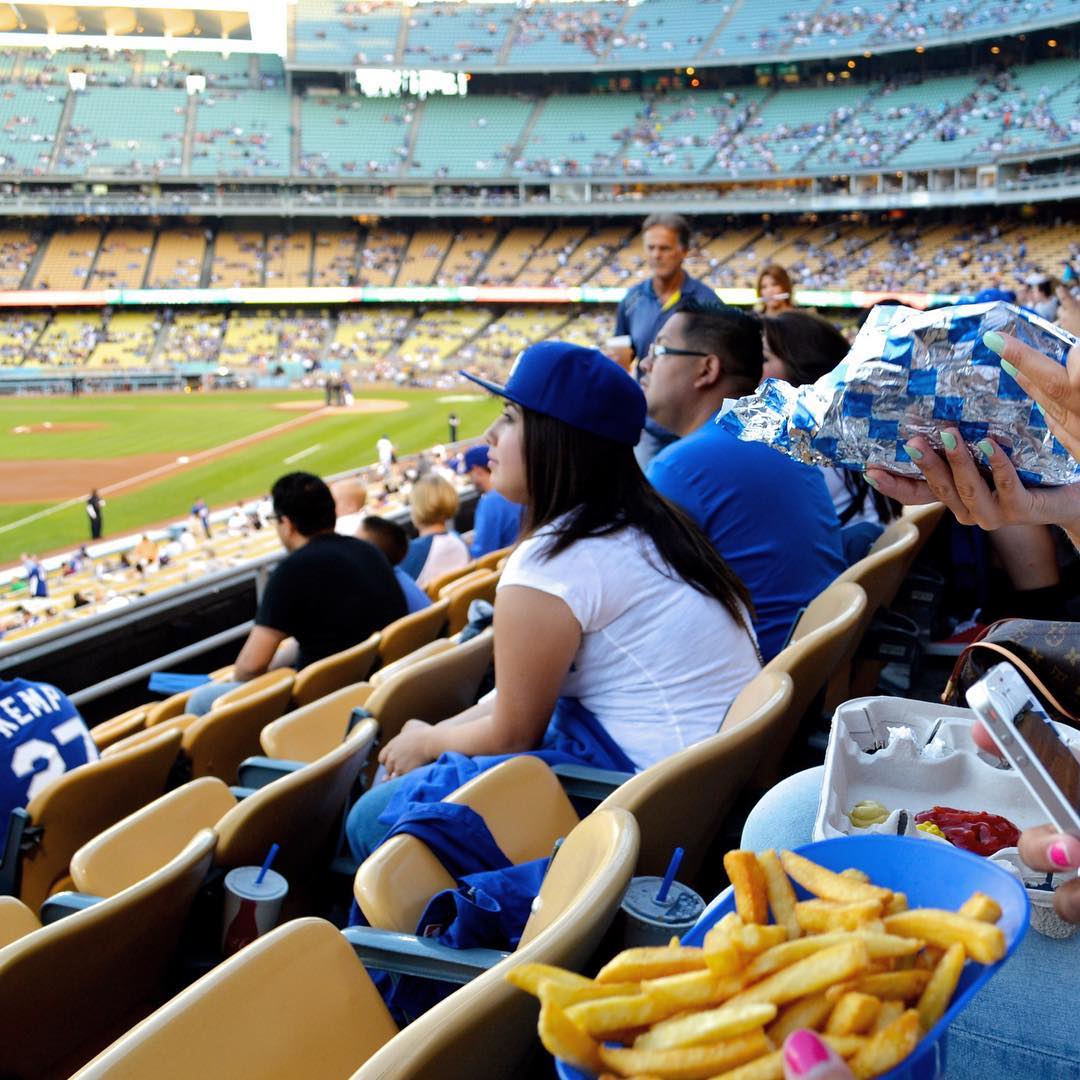 Club Level, $$$
The sought after Stadium Club on the suite level is a great option for an upscale meal (with silverware!) and a full bar, as long as your ticket or friends in high places can get you in the door. 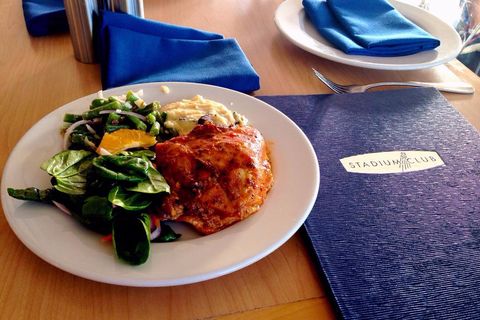 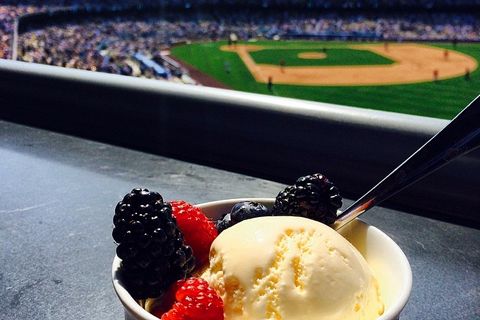 Left and Right Bullpen, $$
The most underrated spots in the stadium to enjoy a drink are at the newly implemented bullpen bars. Head to Left Field Bar early and watch Clayton Kershaw warm up before the start, or hang out near the later innings of the game when the relievers start to warming up. Head to the Right Field Bar if you want to heckle the visiting team’s bullpen. 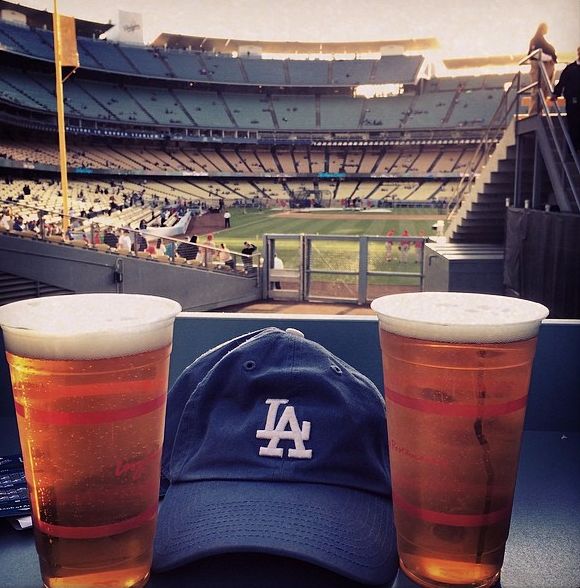 Echo Park, $$
This classic Mexican restaurant is perfect for your before or after Dodger game appetite. The flaming margaritas are their signature cocktail, and the mariachi band provides that particular  ambience only a mariachi band can.

Echo Park, $$
If you think an hour or two is sufficient time to sake bomb and feel toasty before first pitch, then head to Kush pre-game. But if you want to savor your sushi and sake, then head to Kush for post-game revelry. Affordable prices and a quick walk down from Vin Scully Avenue (formerly Elysian Park Ave) make Kush an attractive alternative to your typical American stadium food. 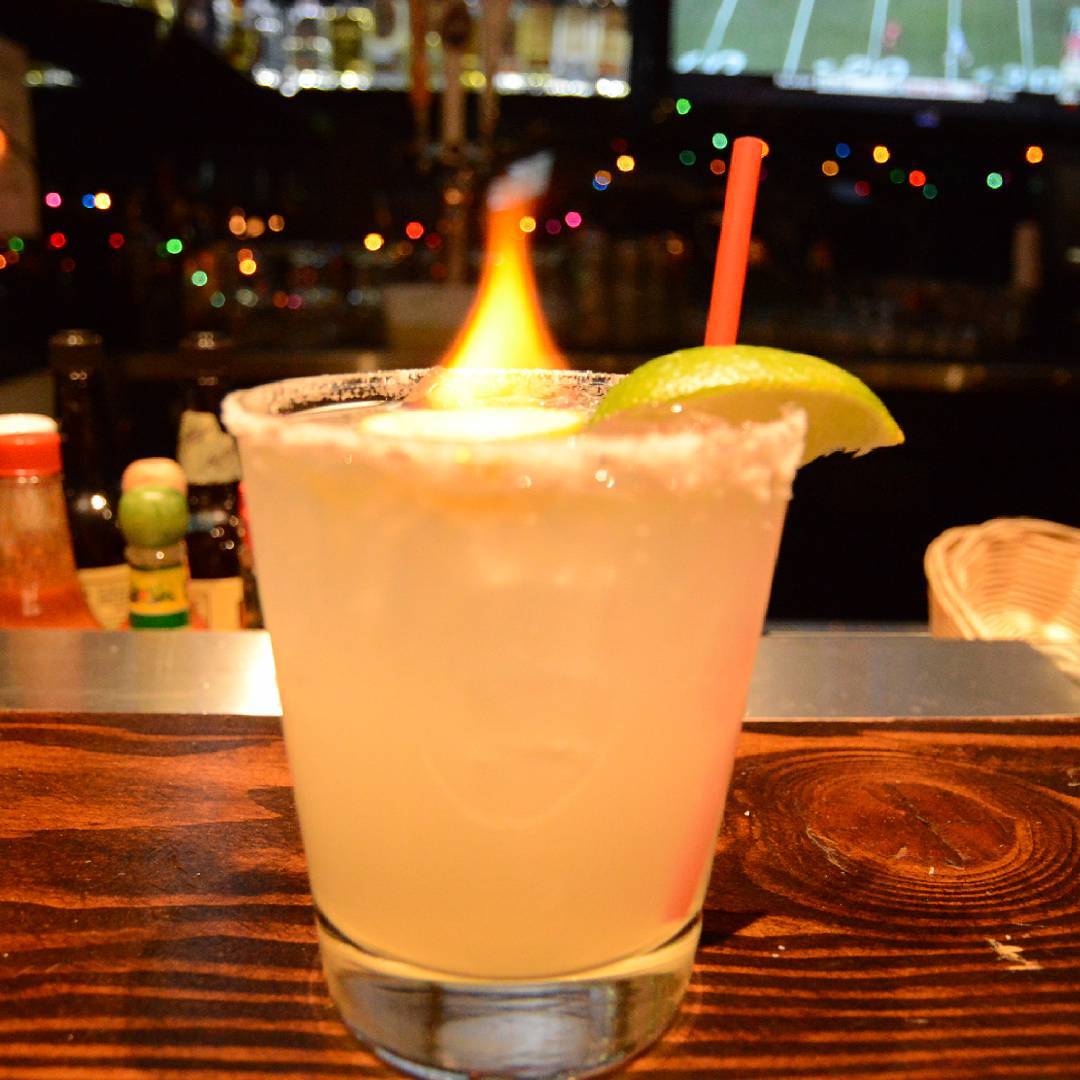 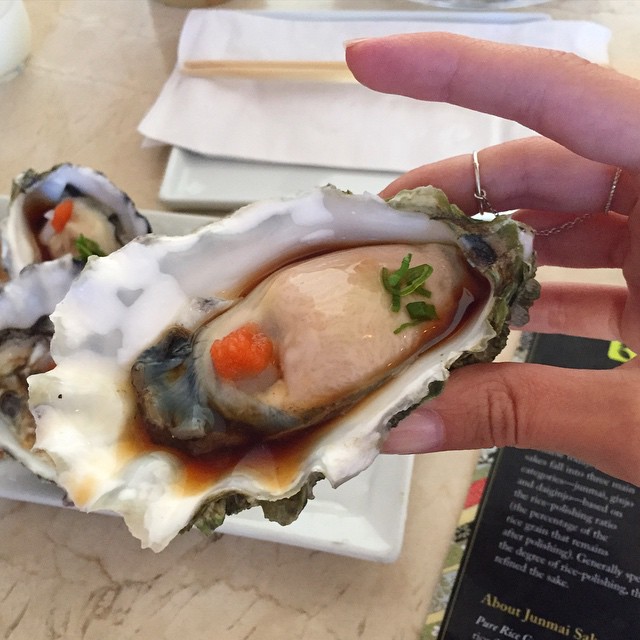 Echo Park, $
The best dive bar is a baseball’s throw away from the stadium. Join other Doyers for pre-game beer specials or if a game lands on Monday, keep the good vibes going at Motown Mondays with live DJs.

Echo Park, $
Known for the beer and tequila shot special, this dive bar fills up late night with locals and Dodger fans (but if you’re a local and you’re a Dodger fan, are you even a local?).  Oh yeah, did we mention free tacos and peanuts? 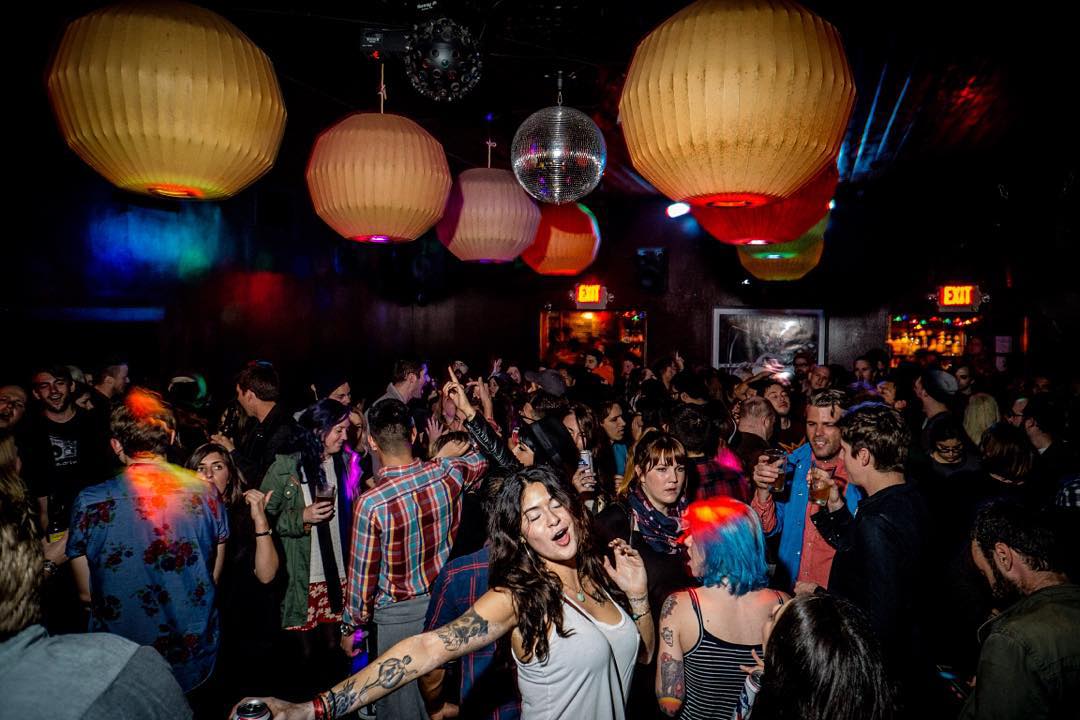 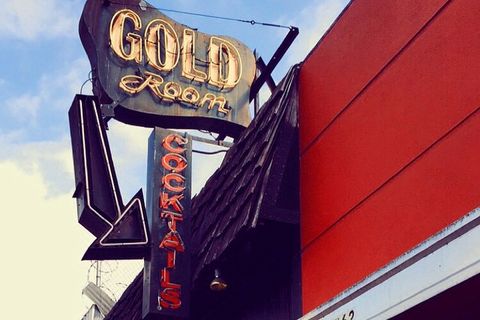 Echo Park, $
This late night burrito stand has been serving up hearty eats to Dodger fans since 1968. Made famous by rocker Warren Zevon and featured in a Gram Parsons photo shoot, Burrito King is it when it comes to Echo Park’s best “drunchie” burritos.

American sports and Irish pubs go hand in hand. Nothing will keep you in the competitive spirit like a game of pool or table tennis while sipping on Jameson or knocking back a pickleback shot. The downstairs patio and live music are as satisfying as sliding into home plate. 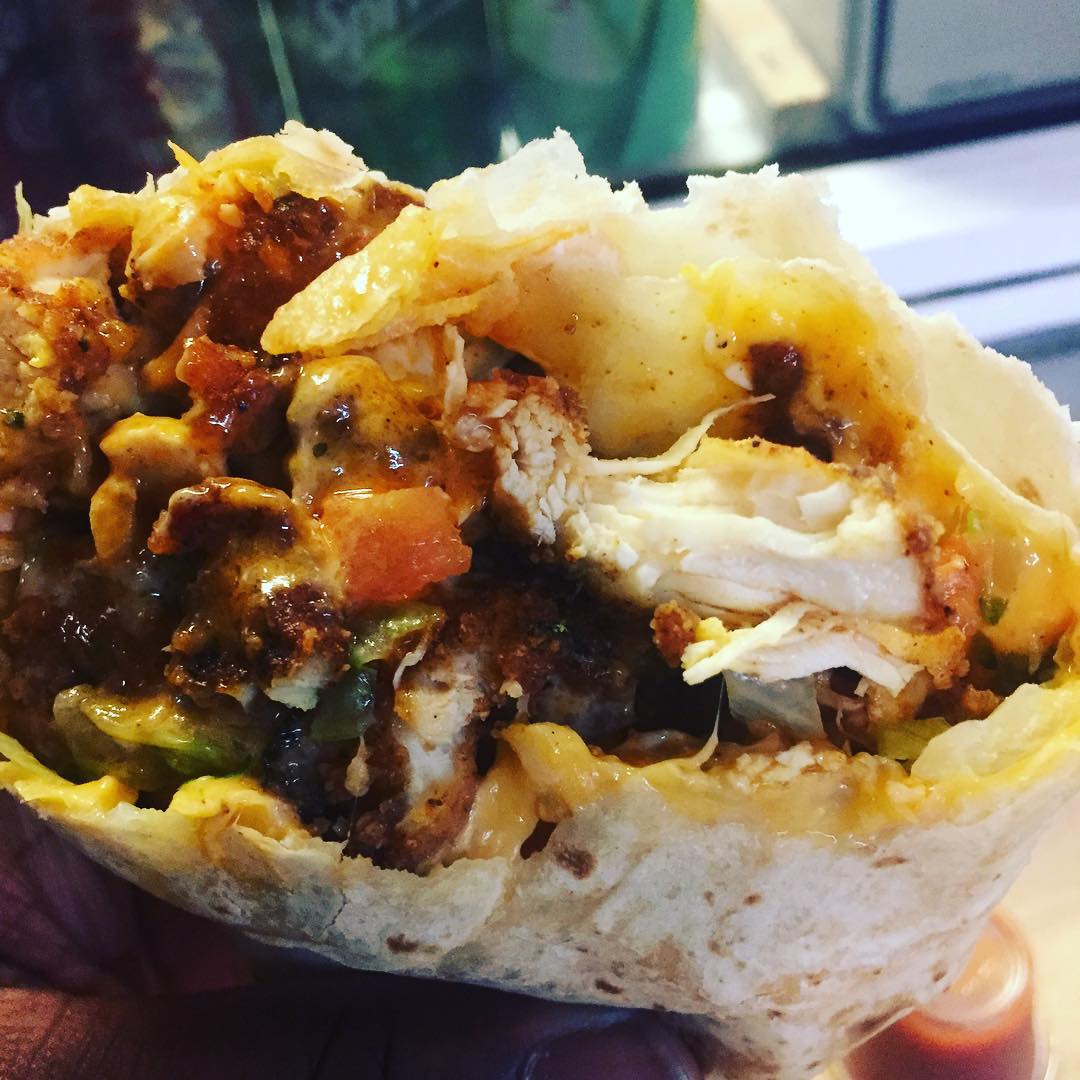 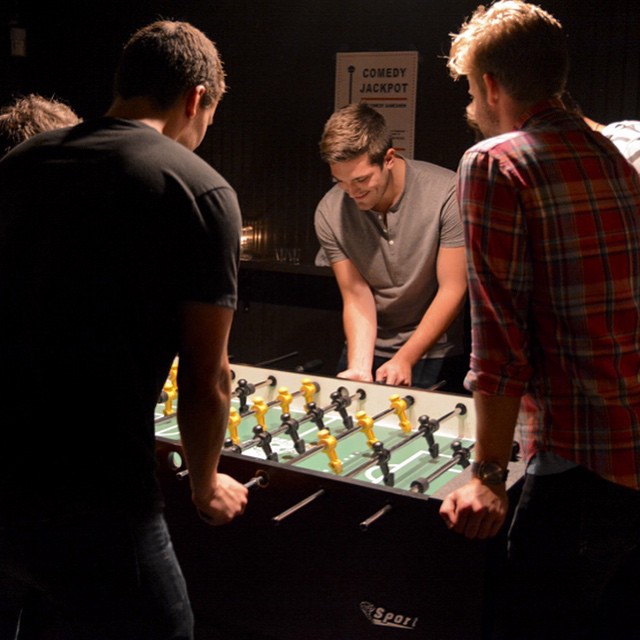 DTLA, $$
Located in the DTLA Arts District, Villains boasts a great drink selection, live music, and an awesome patio.
#ITFDB: The 2016 season begins on April 4. Home opener is April 12 against the Arizona Diamondbacks.
Justin Wagner AKA The Shoot Baby tore his labrum as a left-handed reliever many moons ago, and has since become the third base coach of your favorite beer league team. When he's not coaching third, he enjoys listening to Vin Scully anecdotes. You can usually find him at Dodger home games on the field level, section 7, row X, seat 2.
Featured image of Dodger Stadium courtesy of Justin Wagner