The real estate developer shows off some murals left over from the neighborhood's early days of transformation.

When Paul Solomon opened Sam First, he had the perfect symphony of sounds in mind — jazz and airplanes tucked between hotels and car rentals on a drag of Century Blvd outside of LAX. The bar was inspired by Solomon’s own love of live music. He found his passion for jazz internationally when he was attending school in London and chased those sweet melodies throughout his 20’s, but still saw a gap in the LA jazz scene. “There have never been that many places to hear cool jazz, even though there were a lot of great musicians living here and working here,” he told Citizine. Solomon added that, “People really are happy and thankful that we’ve opened the place. That there’s a place on the Westside to hear good live music and that there’s another place in LA to listen to jazz. People are really excited.” 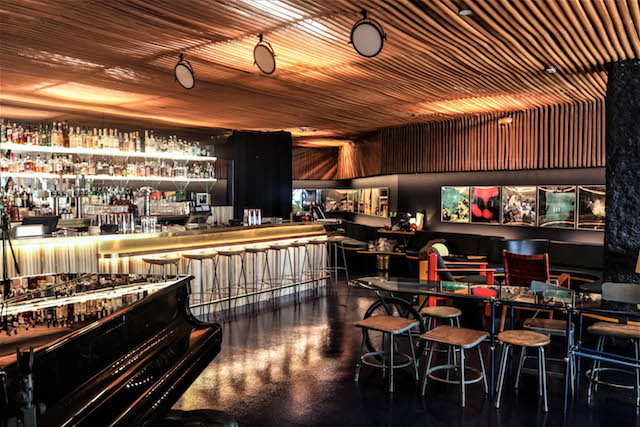 LA has been Solomon’s stomping grounds since far before Sam First. As a real estate developer he has watched and helped create some of the architectural changes happening around Downtown LA, especially in the Arts District. In the early 2000’s he began a love affair with the area and jokingly told Citizine that he had originally moved for, sex, drugs, and rock & roll. “Al’s bar was still there, so that was the rock and roll part, and then it was really the art community and the architecture,” he said. When the opportunity to turn the old bankrupt Toy Factory into lofts came up, he leapt at the chance. “I was part of the community but also happened to be playing with the buildings,” Paul added.

That growth that Solomon has been part of in the Arts District  may not be taken as positive by everyone though. He used the term “victim of your own success in a neighborhood,” to describe the flood of people to the area and the changing landscape. It’s “a natural evolution in our capitalist system. People make neighborhoods interesting, bring them to life, people want to come and then suddenly there are a lot of people there. Part of what was really fun about it was that there weren’t a lot of people there,” he added.

Developing in the Arts District became an opportunity to bring art into his buildings in a new way. Well, more onto his buildings than into. Kim West, a muralist, was a tenant at 1820 Industrial, where the The Daily Dose is located. Solomon began a collaborative partnership with her, to create a mural to bring to life the outside of the building. Kim was just the beginning—he started to work with more artists like JR to create pieces. “If you have walls, then people want to put stuff up," Solomon says. "I started to get people reaching out to me who were either artists or representatives of artists wanting to put stuff up on walls, and I felt like I didn’t want to put stuff up that felt really negative or nihilistic or too egotistic or whatever. But it would be nice to put things up that are beautiful or that somehow feel like they’re adding to — that are really good, thoughtful pieces of art. There was a kind of curatorial aspect to that.”

The Wrinkles Of The City; JR