The Instagram sensation drops the best vegan breakfast in LA. It may be sans animal, but certainly not sans taste ...

For Tim, AKA VeganFatKid, becoming vegan was all about the abs. Well, not exactly. Although a self-professed overweight child, it wasn’t until he started to pack on the pounds as an adult that he began researching the effects of his meat-centric diet and challenged himself to a total plant-based change-up.

The results proved conclusive—he looked better, he felt better and his abs (and biceps!) showed up to the party. From that moment on he knew that he couldn’t go back. And though VFK went vegan for health reasons, after further research into our planet's rather vulgar habit of mass meat-consumption, he knew he’d certainly stay vegan for the animals, too.

“But before you think I’ve traded in all sense of deliciousness for "the cause,” I most definitely still love food and have learned the VeganFatKid art of crushing a dozen donuts, only this time, nobody had to die,” jokes Tim.

So whether you’re hardcore vegan or just trying to find a new restaurant to check out for #MeatlessMonday, Tim’s feed features tons of tasty animal-free dishes in LA.

Whether you prefer gooey french toast with pumpkin maple syrup, a spicy breakfast burrito or just wanna follow suit and crush a dozen donuts, here are the not-so-fat @veganfatkid’s favorite spots for an awesome vegan breakfast in Los Angeles:

VeganFatKid: Get the breakfast special, just make sure it’s the one with the pancakes! The breakfast special changes weekly, typically with a choice of Tofu Scramble, Vegan Sausage and Fruit, Toast or Pancakes. But it's really all about those pancakes! Fat and full of flavor, the fruit is cooked right into the batter so you may even find the maple syrup redundant! 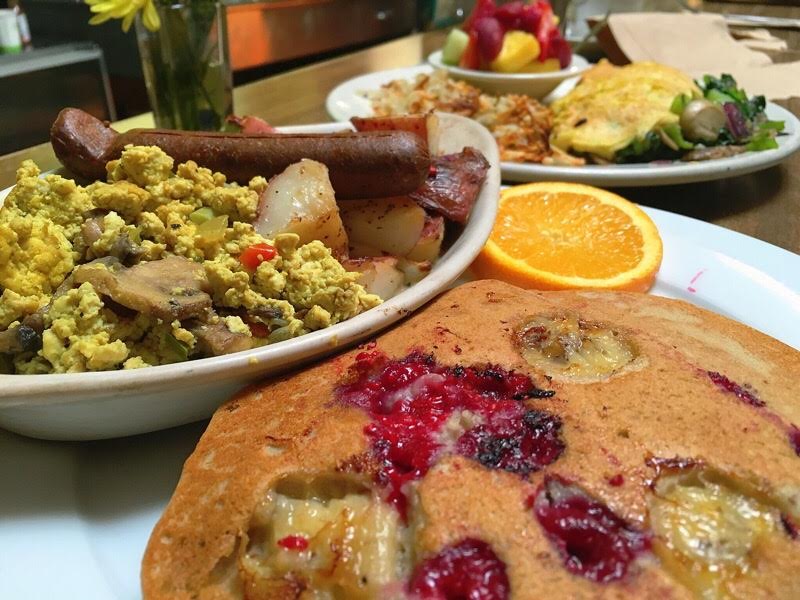 The breakfast special at Follow your Heart. Image courtesy of @VeganFatKid 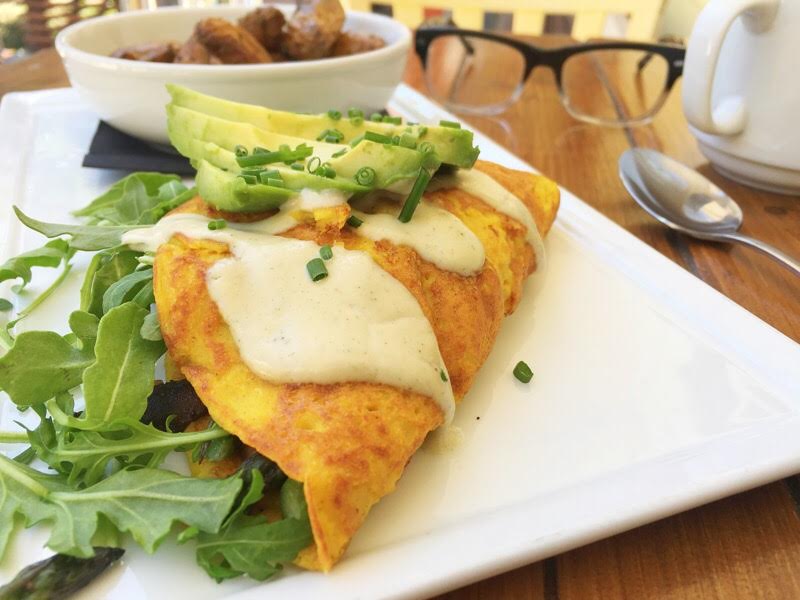 The Vegan Omelette at Sun Cafe. Image courtesy of @VeganFatKid

VFK: Forget that it's gluten-free, this french toast is perfectly moist and gooey and that's before adding the pumpkin maple syrup! Topped with poached pears and walnuts you have the perfect marriage of sweet, tart and crunch! 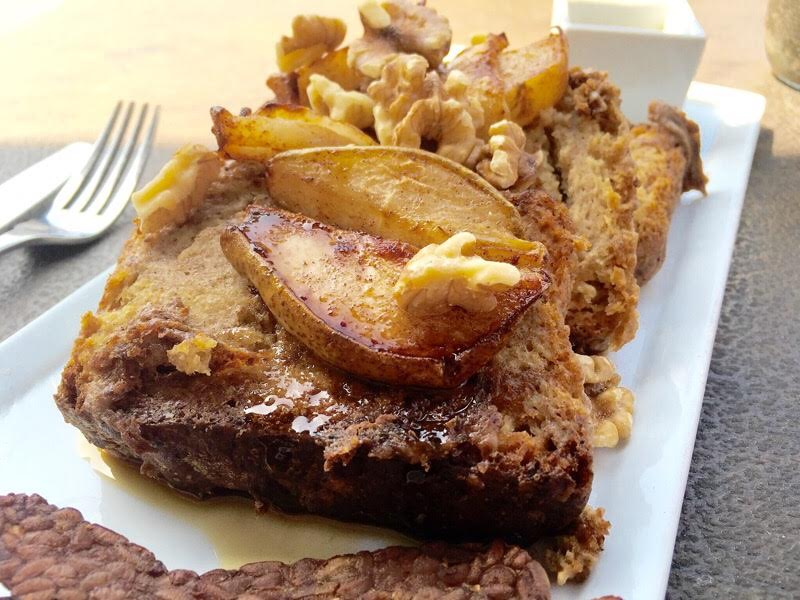 VFK: Possibly my favorite dish in Los Angeles right now. And yes, we have bagels in LA. Can you say "Smoked Heirloom Carrot Lox?" Add Kite Hill cream cheese and a housemade Everything Bagel and you are a cup of coffee away from the perfect start to the day; no matter which coast you live on! 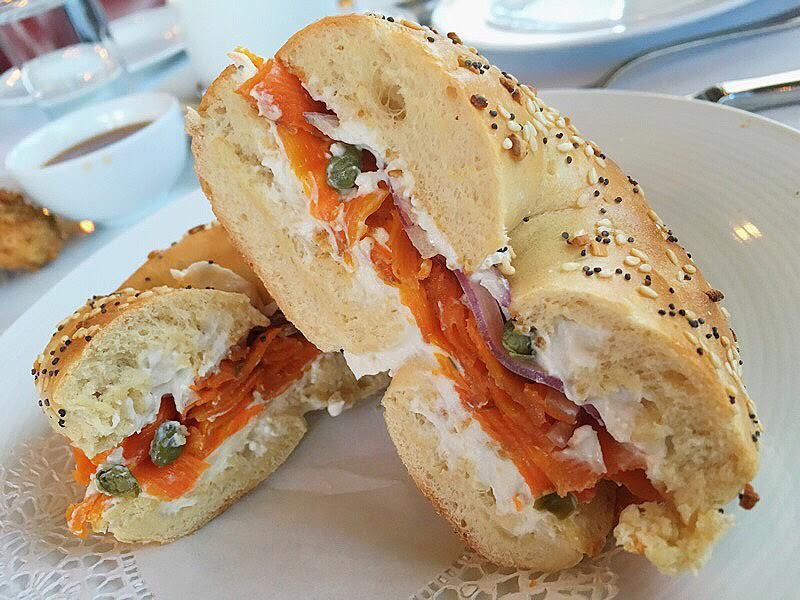 VFK: I mean, it's a Burrito at Breakfast! 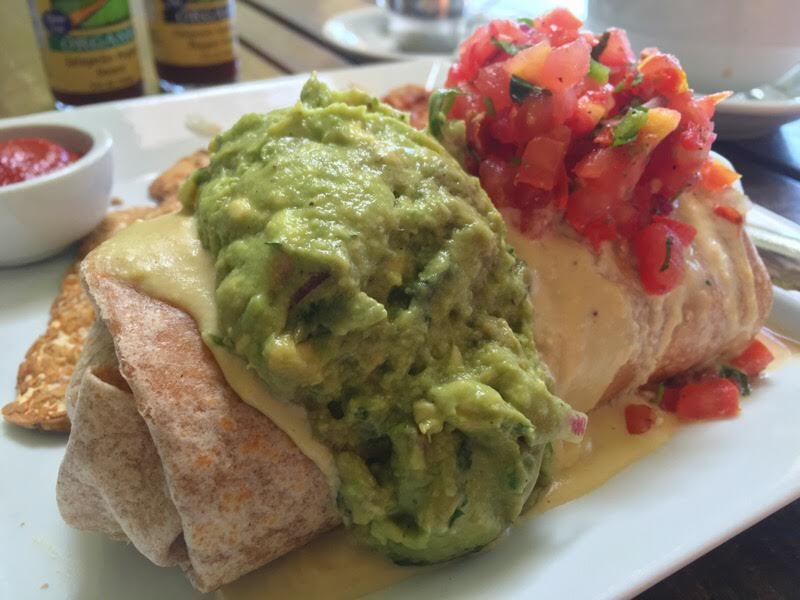 VFK: There's no shame in going raw for breakfast. Your homemade breakfast probably doesn't come from a dehydrator so I won't blame you for not ordering the "Fantastic" (raw crêpe), but you'd be missing out. Dehydrated cashew wrap filled with house made coconut yoghurt and fruit, drizzled with maple syrup. My tip: double check what seasonal fruit they have available as it's definitely best with an apple, banana, berry combination! 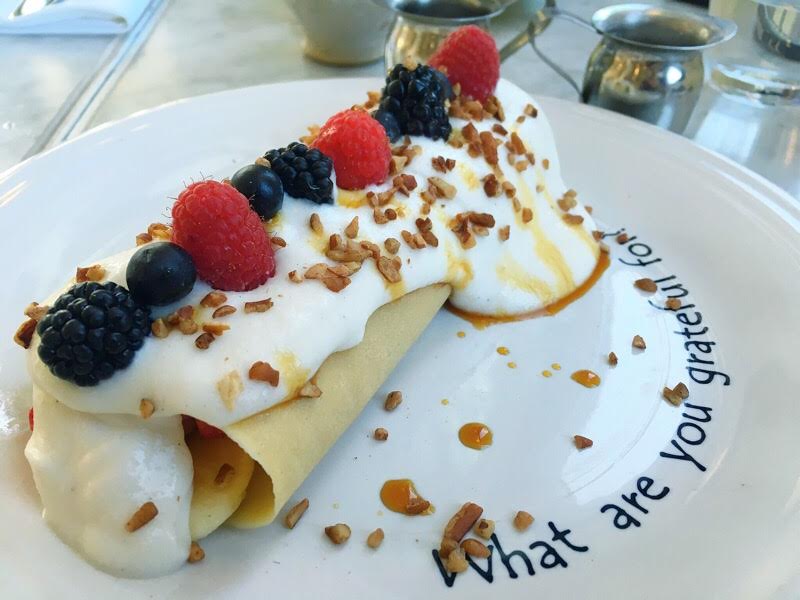 VFK: I don't care what you put in them, these croissants are ridiculous. 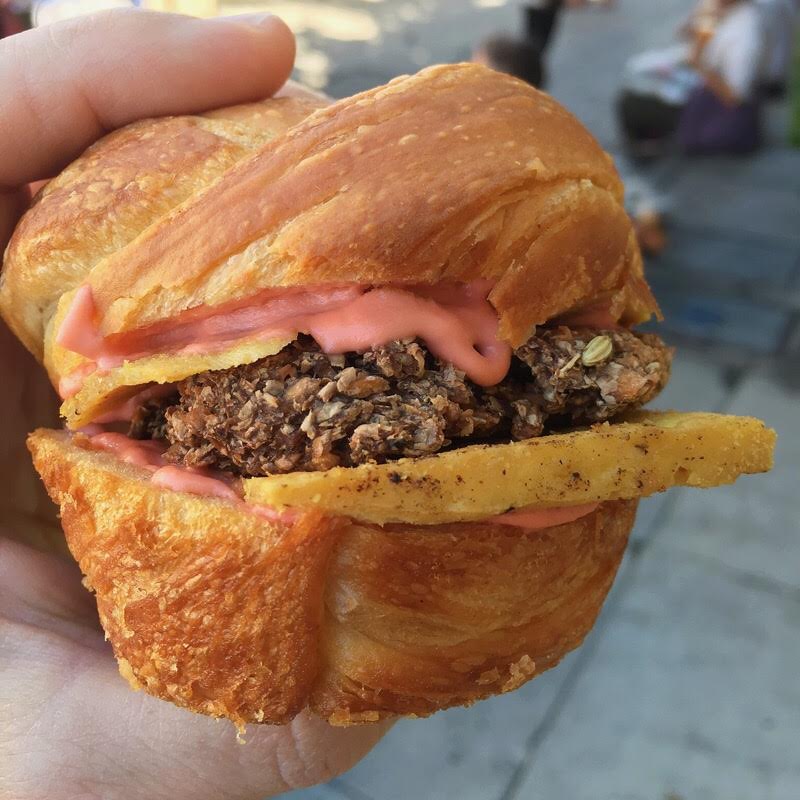 VFK: Holy Avocado! For all my Avocado Toast lovers—this is the best in town! Artisan millet bread from the East Coast, maple tempeh "bacon" and boulders of avocado. No spreads here! What makes this Avocado Tempeh Lettuce Tomato sandwich so special is the housemade dijon aioli giving the dish added dimension and a fantastic contrast to the sweeter tempeh. If you haven't had breakfast at Kitchen Mouse yet then I'm not sure we can be friends. But if you see me there, definitely say hi! 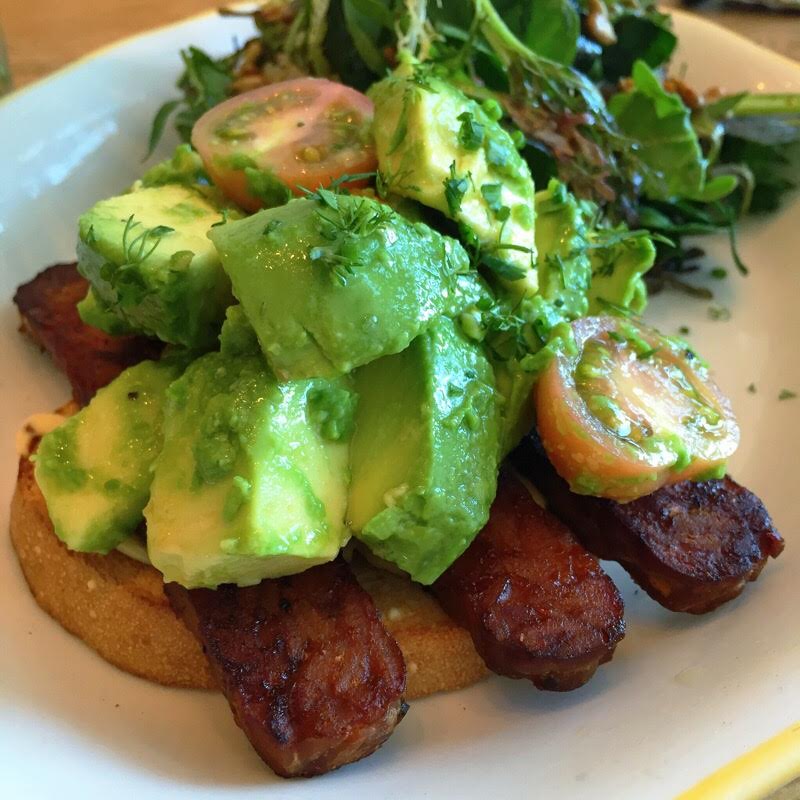 VFK: Fast becoming a Sunday morning institution. When you hit Donut Friend, you need to trust your inner child. If she/he says "Peanut Butter & Jelly" then you need to keep things classic and order the "Drive Like Jelly". Apparently my inner Fat Kid says "S'mores Cake Donut with Cookie Butter" so I go with the "S'morrisey" and have the fine Donut professionals apply the perfect amount of "Cookie Butter". And yes, I was an overweight child. 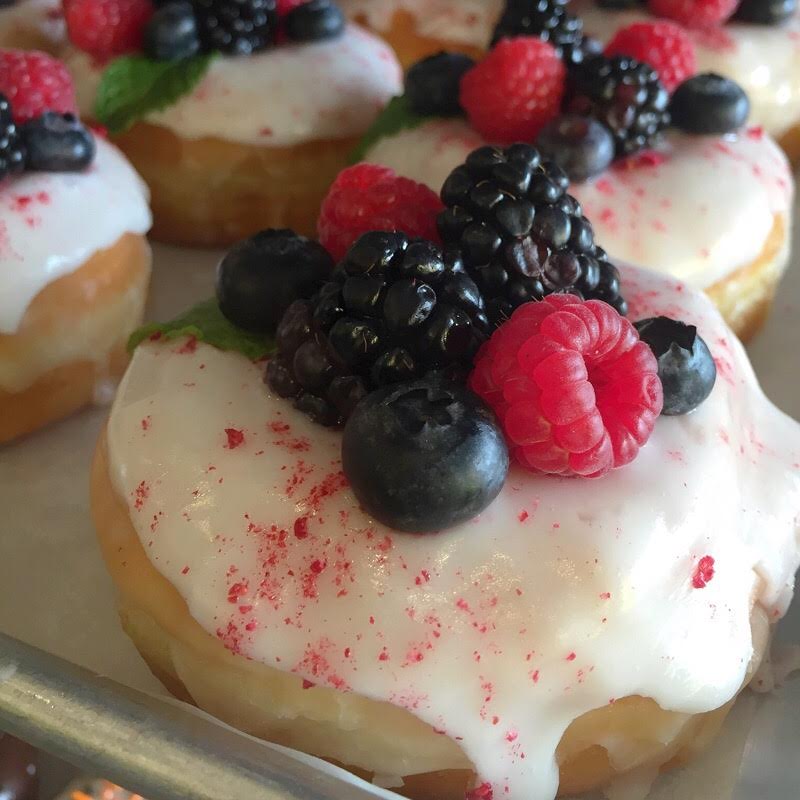 VFK: If you grew up in the fast lane and you ate in cars, then your breakfast probably looked like this. 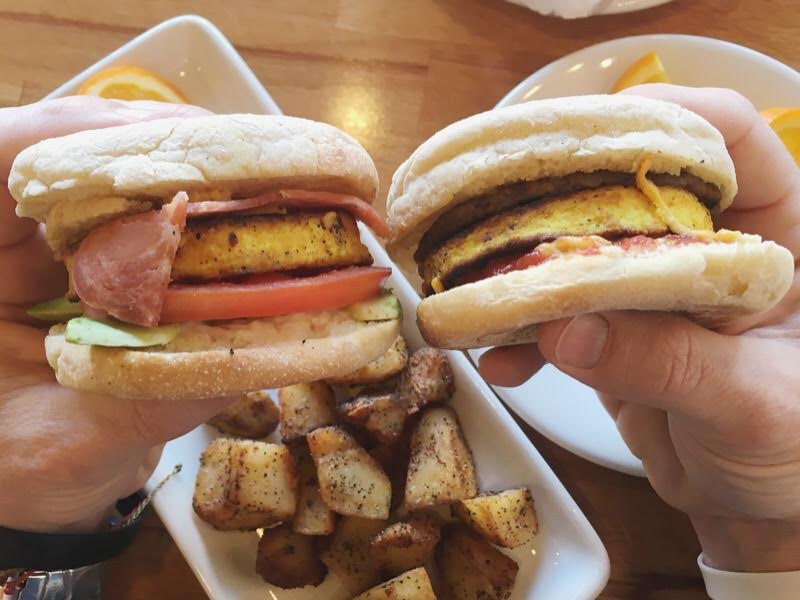 Belinda Gosbee is an Aussie writer, actress and coffee snob based in Los Angeles. Allergic to the trusty oeuf, she’s long lusted after her first taste of French toast and now, thanks to those crafty vegans, she will feast. Follow her jaunts on Twitter @belindagosbee or instagram @gos22.