Where balls, sweat and friends meet for a good time in LA

The year was 2012. It was my first dodgeball game in 25 years. I entered the gym with as much swagger as a grown man wearing matching Cookie Monster boxers and t-shirt could muster. We were the Undie Dawgs after all—Hollywood Rec Center's newest dodgeball team. 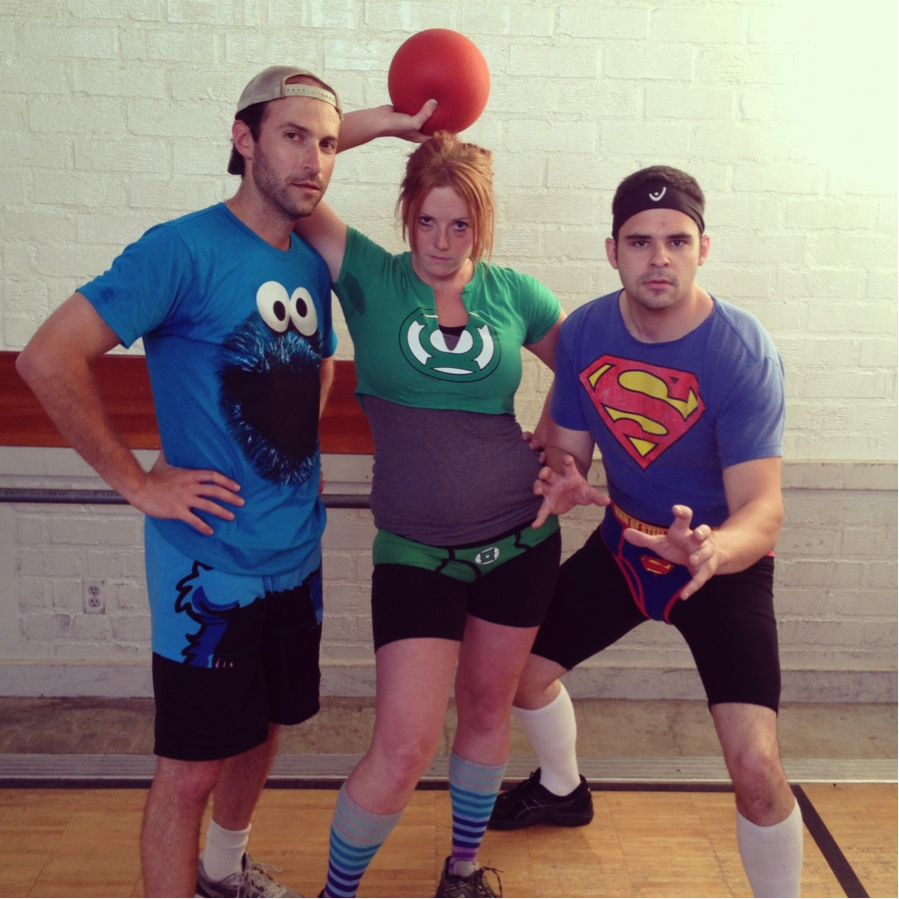 When Cookie Monster comes out to play ... Image courtesy of the author, Brian Roth

WHACK! BOOM! The game began and we were terrible. Beyond bad. We lost every game. All season. No matter though, because losing never felt so good. I had unearthed a passion that was literally pounded into me. It was the best part of middle school recess all over again, except now, I could play in my underwear.

If you're up for getting involved in the silliness, there’s no better place than the Motherland, Los Angeles—where dodgeball beyond the playground first began.

In 2003, a full year before the movie DodgeBall: A True Underdog Story debuted, Michael “Handsome” Costanza founded the Los Angeles Dodgeball Society—the nation’s first adult recreational dodgeball league at the Hollywood Rec Center. Since then, the group has blossomed into the World Dodgeball Society, with 11 leagues throughout the city at various levels of competition and inspired leagues worldwide, from Australia to Singapore.

Since Handsome hadn’t even heard of the Globo Gym's Purple Cobra team (featuring White Goodman played by Ben Stiller) for inspiration yet, what did spur him to start the world’s first adult recreational league?

“‘Winning is for losers’ was the mantra we were founded on. We branded ourselves as an anti-sport ... an anti-activity,” says Handsome. Apparently, Peter LeFleur's (played by Vince Vaughn) team, Average Joe's, was more what he aspired to. 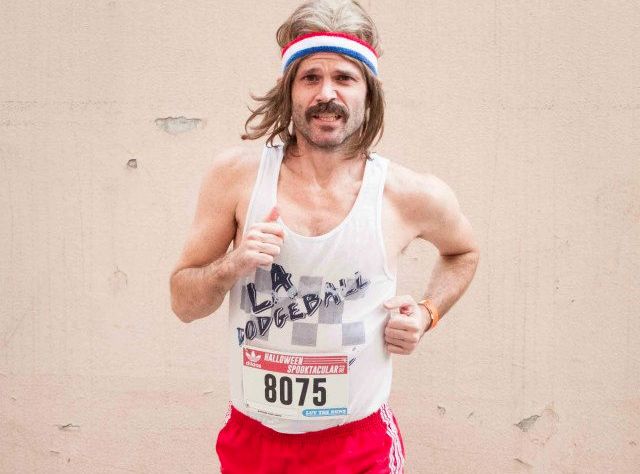 Like a lot of us, he was trying to channel his inner kid. He wanted to time travel back to that pre-pubescent grade school recess blacktop when you got hit square in the face, nuts, or chest with a big red kickball.
“Dodgeball was left in that proverbial time capsule. It was a chance to go back in time before puberty happened,” says Handsome. 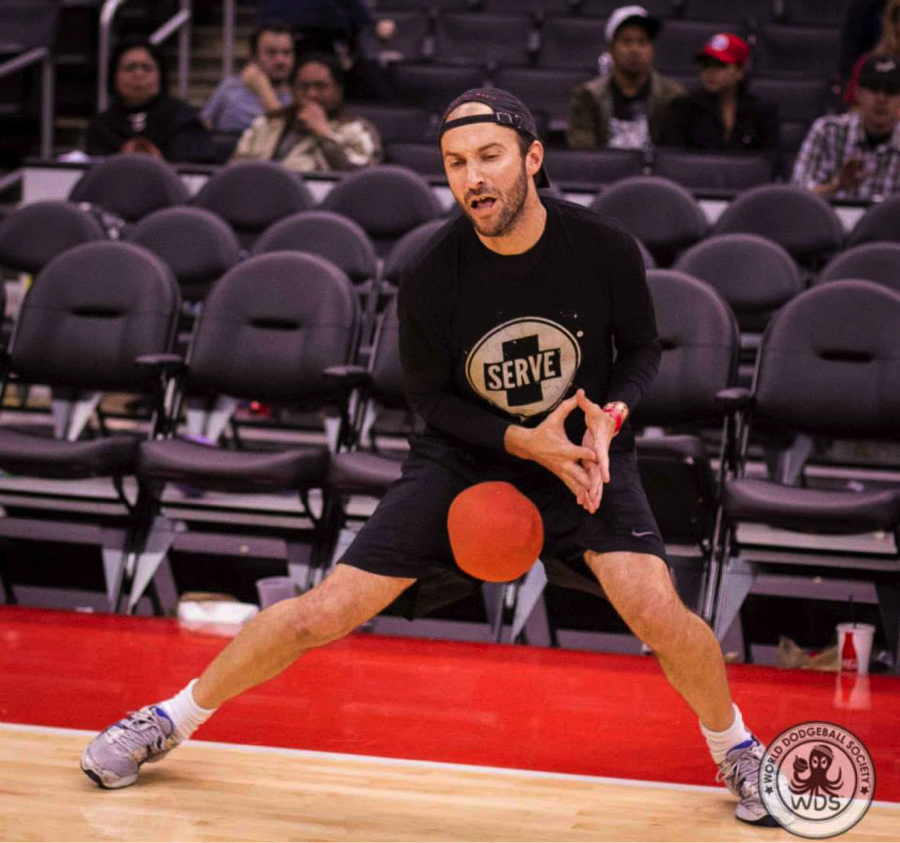 Watching someone get hit in the nuts is funny at any age. Image courtesy of Allison Knight, World Dodgeball Society

Sure, our junk may be older and the balls may have gotten smaller (most adult rec dodgeball is played with rubber balls rather than those rock-hard, red kickballs you’re probably picturing), but adult dodgeball today is the exact same sport. And since the friendly adult version started more than a decade ago in the City of Angels, it's grown to three main dodgeball organizations: World Dodgeball Society, WeHo Dodgeball and Eagle Rock Yacht Club. Combined, the three clubs offer a whopping 20+ leagues throughout LA. So, there’s one for everyone.
Follow this handy Los Angeles dodgeball guide and you are well on your way to becoming the coolest uncool jock in town:

Now that you’ve got the fundamentals down, abide by these three unspoken dodgeball rules to guarantee good times:

Seasons generally last ten weeks and are roughly $55-$60 to join. Most people sign up for one in their neighborhood, but if you’re a DB diehard like myself, you'll choose carefully based on league dynamics. 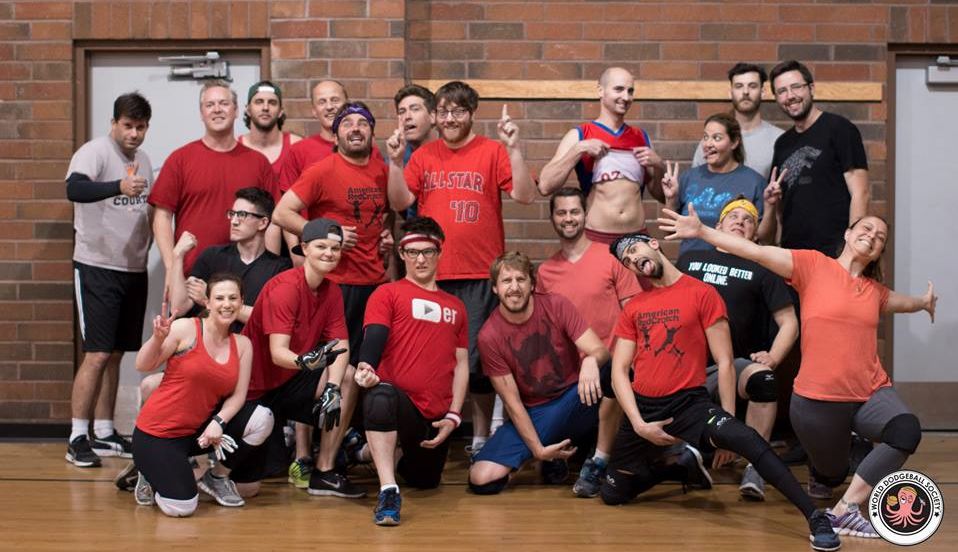 Your tribe is out there. Image courtesy of Allison Knight, World Dodgeball Society.

Here’s the breakdown:
If you’re all about nostalgia, check out ...
WDS - Hollywood
This league is where it all began 13 years ago, started by Michael Handsome Costanza.
Deets: Enjoy your dodgeball here with a sense of history every Monday night at Hollywood Rec Center.
If you just LOVE being in a room full of sweaty men (and a few women), join ...
WeHo Dodgeball
Don’t let team names like Star Whores, Magic Mikes (yes, every guy on the team is named Mike), or 50 Shady Gays fool you, the competition here is pretty fierce. And registration in the mostly—but not entirely—gay leagues sell out in five minutes every season.
Deets: League games are Tuesday and Thursday nights at West Hollywood Rec Center. 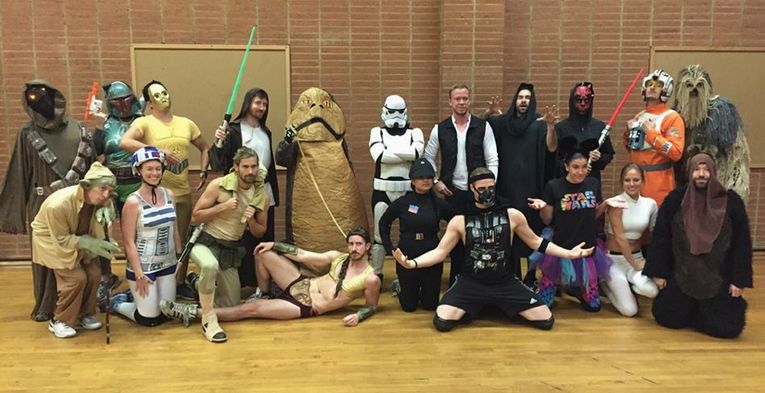 If you’re a masochist or just enjoy big balls, sign up for ...
WeHo 8.5” League
Unlike most other leagues, this one is played with those same big balls (8.5” refers to the size of the balls) from the playground. Careful, they sting.
Deets: You can get hurt so good every Wednesday night at Pan Pacific Park.
Or, if you’re more into straight up girl-on-girl action, check out ...
No Boyz Allowed
Deets: This all-girl, draft style league throws down at Poinsettia Rec Center on Wednesday nights. 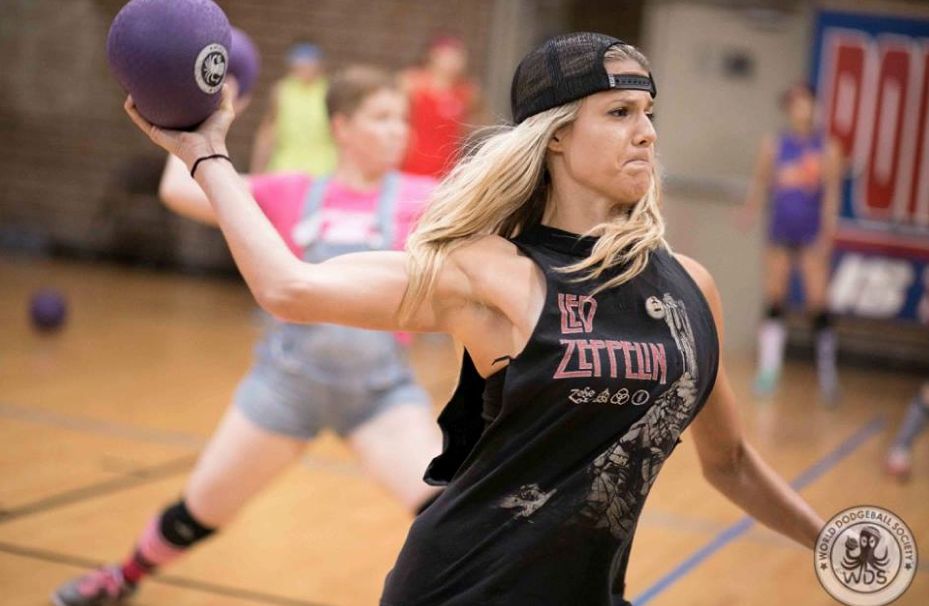 No Boyz Allowed team gives 'you throw like a girl' a whole new spin. Image courtesy of Allison Knight, WDS

If everyone’s a winner in your book AND you like playing with kids, join ...
Eagle Rock Yacht Club
Turns out there’s a league that’s actually a non-profit. Dodgeball is part of the story here, but so is giving back to the rec centers where they play. In addition to the adult league (where they don’t keep score or standings to keep it casual), The Yacht Club hosts weekly kids dodgeball nights throughout the school year to give players a chance to get picked on by eight-year-olds (yeah, just like the Girl Scout troop did in the movie).
Deets: League games are played Tuesday through Thursday nights at rec centers in Highland Park, Venice, North Hollywood and Glassell Park. 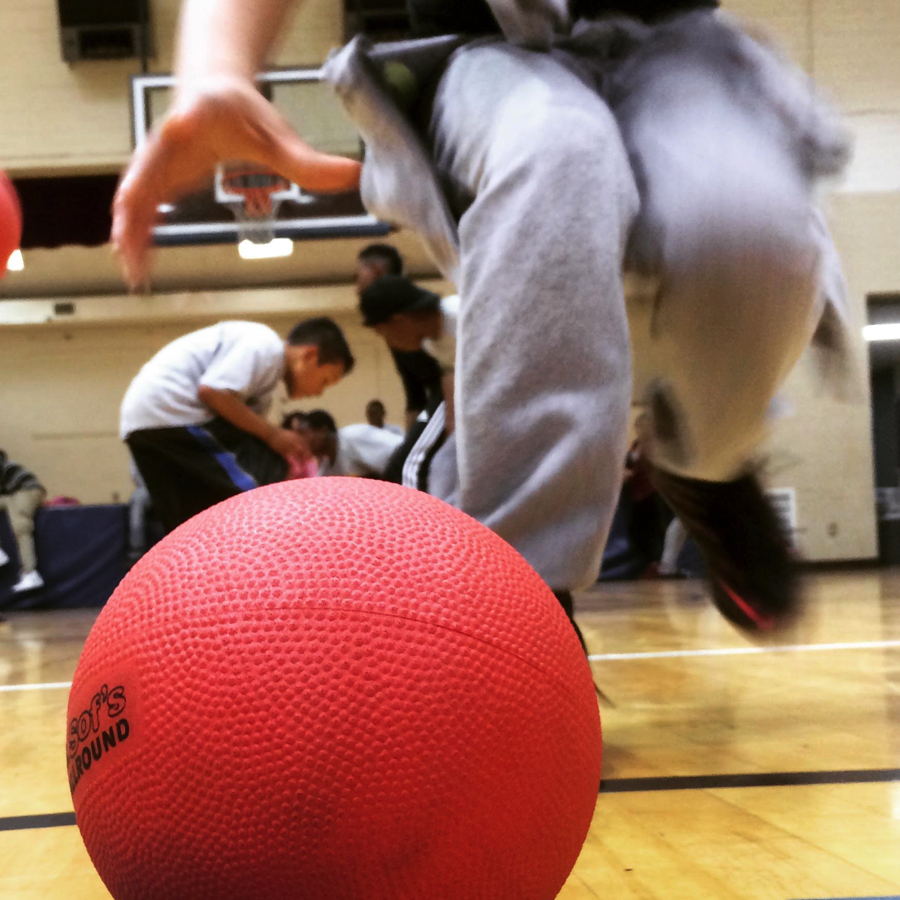 If Patches O’Houlihan is your god and White Goodman your spirit animal, then go here ...
Melrose Perfect 10
This advanced league is designed for those who like their dodgeball hard, fast and rough.
Deets: Matches are played Sundays at Poinsettia Rec Center.
If you’re still not sure about committing to a full season of reliving middle school glory, then test the waters at ...
Open Gym
These are weekend pick up games open to anyone.
Deets: Standing Open Gyms take place on Sundays at Noon at Poinsettia Rec Center and Sundays at 3:30pm at Glassell Park Rec Center. $5 gets you 90 minutes—two hours of action.
Get Citizine Updates Here

Leagues are usually played at city rec center gyms, so drinking during game play is technically discouraged. But every league has a post-game bar, where you can apologize to whoever you pelted in the face that night and show off your drunk bar game skills. 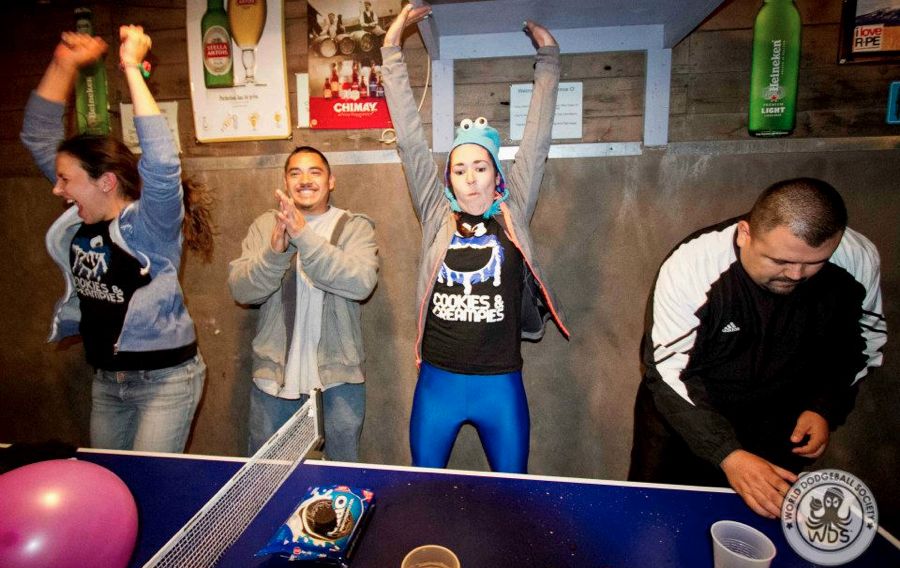 And the games continue. Image courtesy of Allison Knight, WDS.

A few worth mentioning:
Prince O' Whales
Playa del Rey, $
The World Dodgeball Society - Westchester league gathers at Prince O’ Wales after game play every Wednesday, where the back patio is a perfect venue for weekly bar games organized by the league. 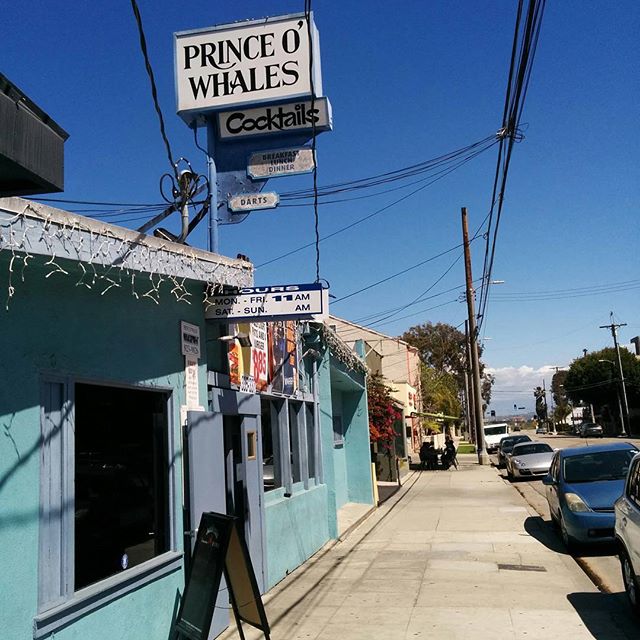 Big Wangs
NoHo, $
Big Wangs is the place to be after Tuesday night games. The Eagle Rock Yacht Club - NoHo league has their own private room at the bar where they play a different game each week—often with pitchers of beer up for grabs for the winners. 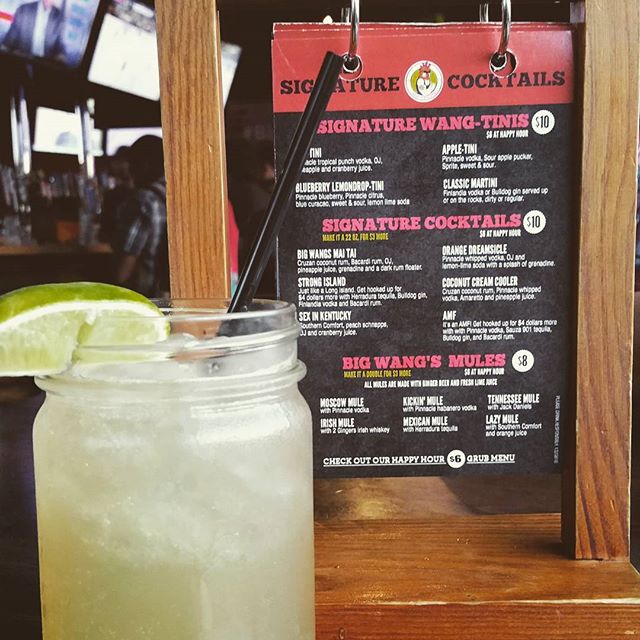 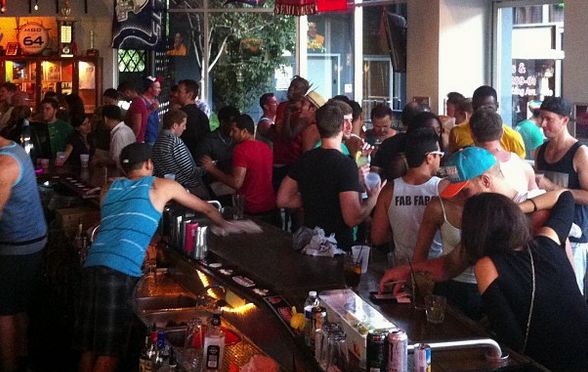 For starters, unless you’re Steve the Pirate, the basic dodgeball uniform consists of a funky T-shirt or screen printed team tee, shorts (or tutu), maybe some old-school tube socks, knee pads, a headband or baseball cap and tennis shoes. 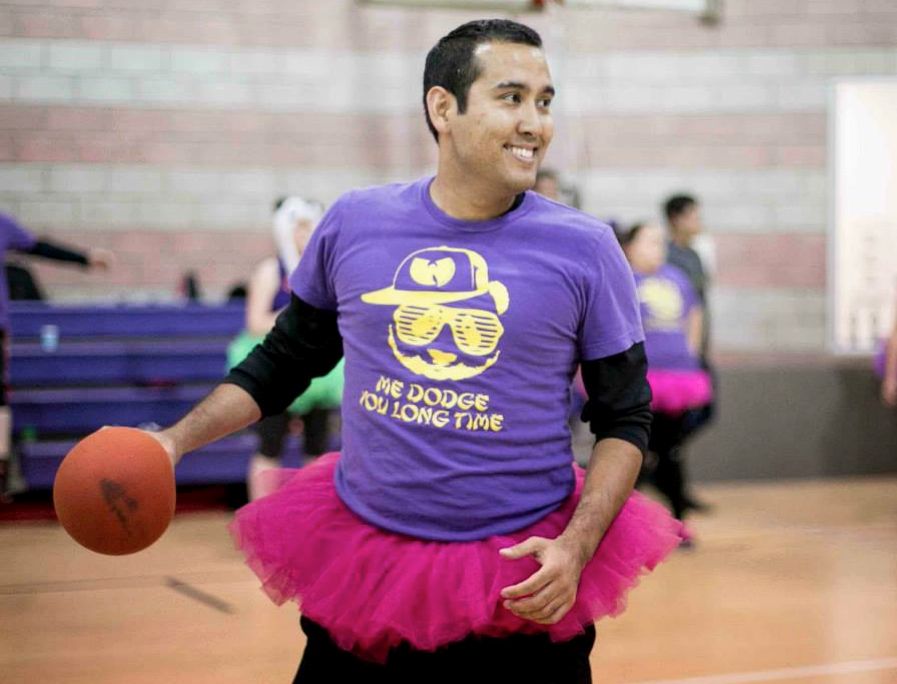 What other sport can a man boldy rock a pink tutu? Image courtesy Allison Knight, WDS.

Here are some places to put together the winning look, on the court:

Kools Clothing Store
DTLA, $$
For some offbeat options, check out Kools Clothing Store in DTLA.
Y-Que Trading Post
Los Feliz, $
This kitschy Los Feliz shop put themselves on the map with those Free Winona shirts back in the day, and they’ve been keeping it fresh ever since.
Ultimate Shirt Company
DTLA, $
That winning team name—perhaps Ball & Oates or Me Dodge You Long Time—needs a custom shirt, dammit. Head over to DTLA’s Ultimate Shirt Company or JJ’s Embroidery in Fairfax and design shirts of champions.
Urban Outfitters
Various Locations, $$
From “Feel the Bern” to a Jesus’ last supper kegger party t-shirt, Urban Oufitters has a plethora of hipster cool shirts to rock. 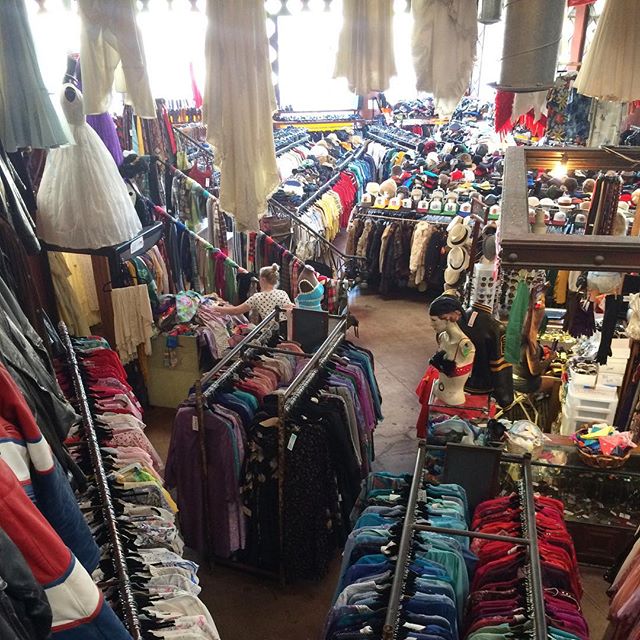 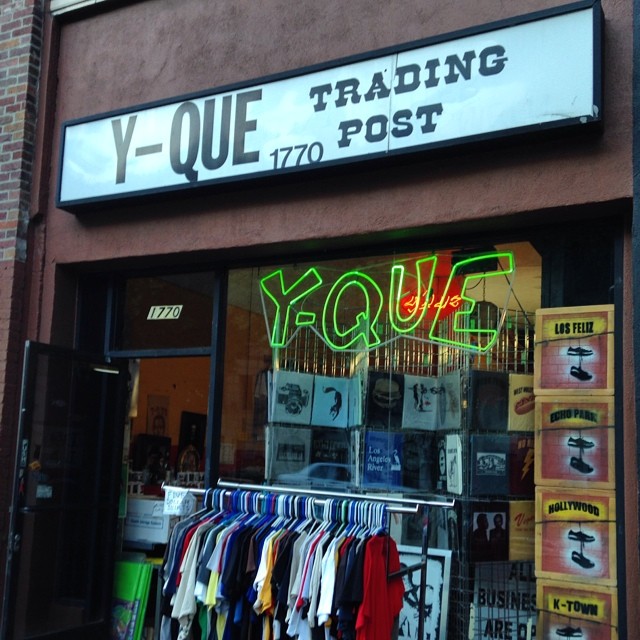 Happy Socks
Venice, $
If you want to up your sock game in a funky/fresh way, Happy Socks on Abbot Kinney is your answer.
The Santee Alley
DTLA, $
More of an old school, high tube socks guy or gal? Santee Alley in DTLA is the answer for some classic 70s socks with stripes to boot.
Los Angeles Sock Market
Universal City, $$
Sure, you have to dive into to tourist central, but it’s worth it to find exactly the right socks. From Dodgers logo to Marvel Comic superheroes, if the Sock Market doesn’t have it, it probably doesn’t exist. 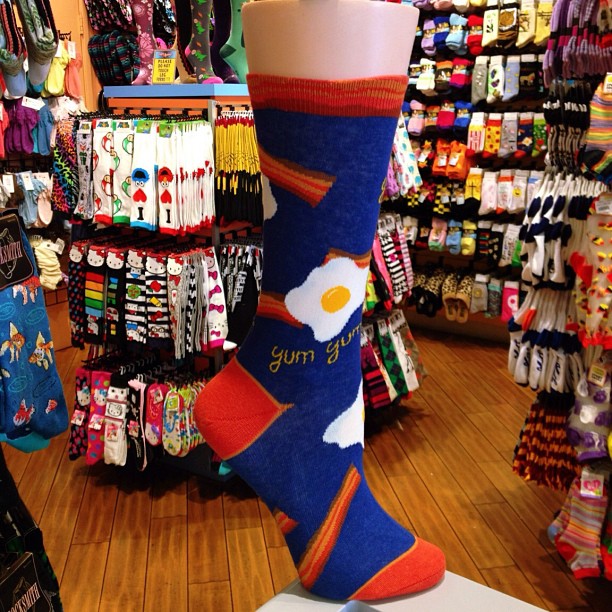 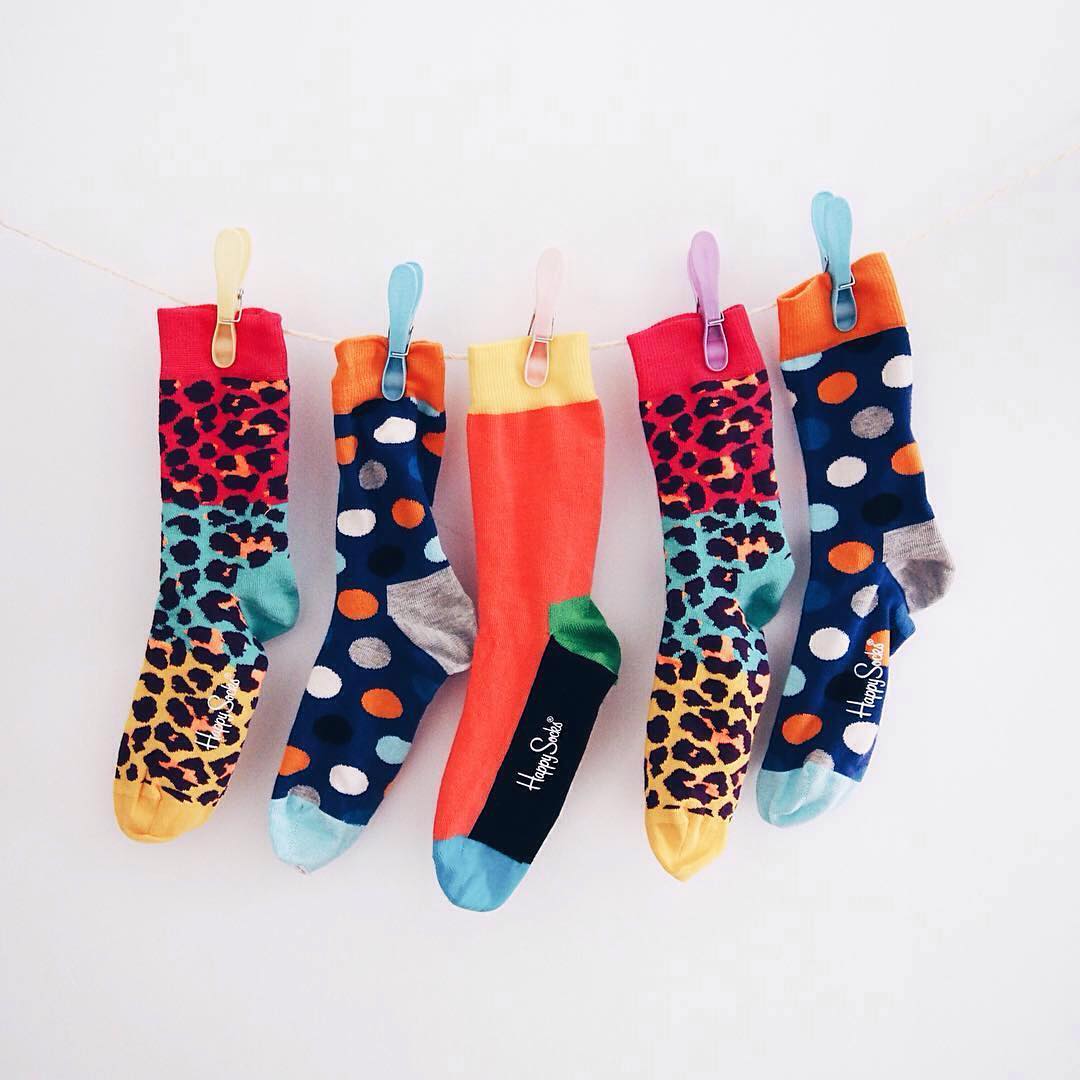 Some folks go vintage (there was a girl who played a few seasons ago with an original pair of Reebok Pumps from the 80s!), some go flashy, but whatever your style, Waraku on Abbot Kinney, Sportie LA on Melrose or Undefeated on La Brea or Main Street in Santa Monica will complete you.

Separate from the leagues, there are a number of tournaments throughout the year that bring out the best in wacky dodgeball costumes and drunk dodgeball playing. Some are annual, some are one time deals. Here are a few not to miss: 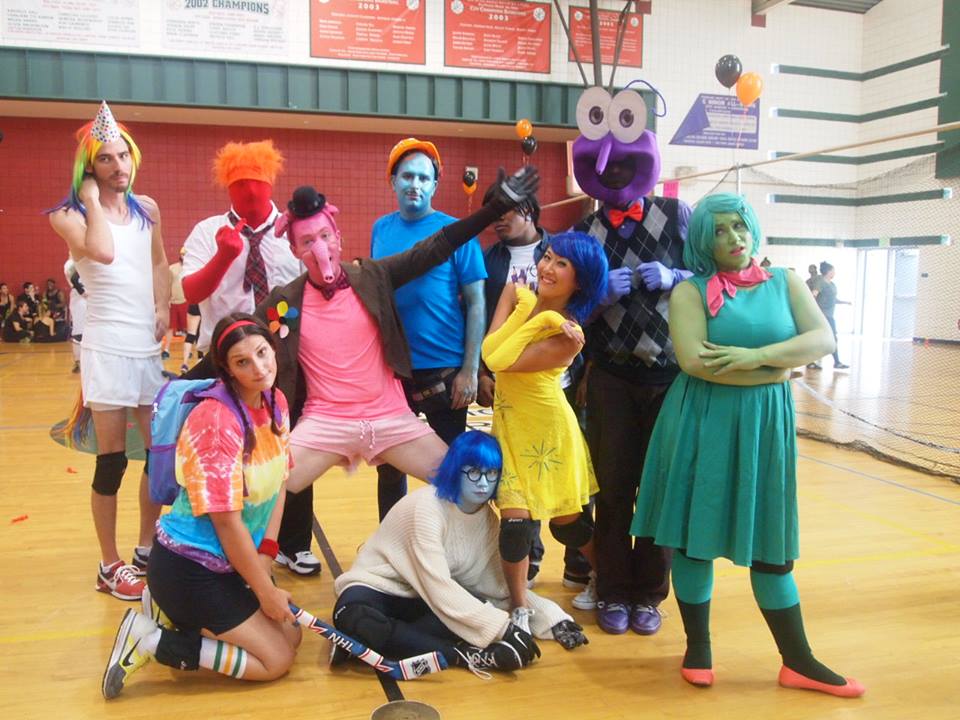 Tournies = a good excuse to play dress up. Image courtesy of WeHo Dodgeball.

The Burt
Half dodgeball tournament, half moustache expo, this annual fiesta takes place on May 28-29 at Bellevue Rec Center in Silver Lake.
Dodge for Dogs, Catch for Cats
This benefit for animal shelters goes down at Pac Pacific Park on June 18.
WeHo’s Annual Charity Halloween Tourney
This annual benefit tournament brings out the most awesome team costumes in town.
Eagle Rock Yacht Club’s Annual Tournament of Love
Filled with raffle prizes and house rules to make game play a little more interesting, the annual Valentine’s tournament is a win every year.
And finally, in case you were still unsure, here are the ...

Top 6 Reasons Why You Need to Try Dodgeball 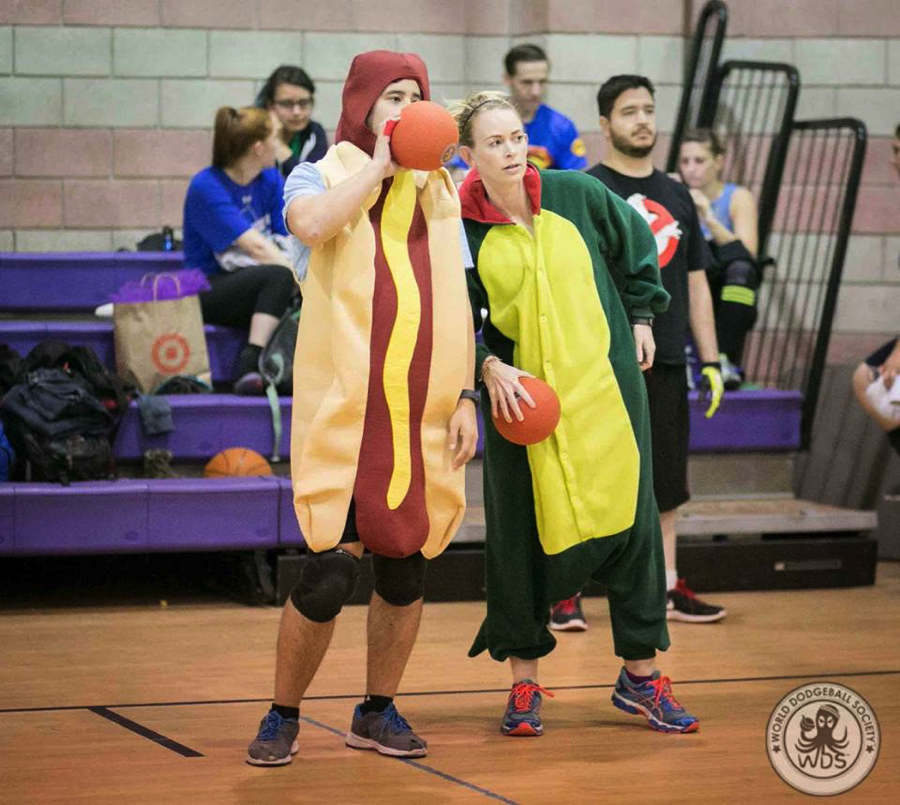 What you have to look forward to: hotdog and dino teammates. Image courtesy Allison Knight, WDS.

Here's to grabbing life by the rubber balls ...

Brian J. Roth has been dodging balls in Los Angeles since 2012. You can find him smiling through a game in a sweaty gym near you, in a merman suit or at Santee Alley on one of his cool, quirky dates he likes to plan and on Instagram / Twitter @brianjayroth.