An LA Times review recently extolled that if, “breakdancing and concert dance had a baby, it would be the Jacob Jonas Company" and with his refreshing fusion of Venice Boardwalk b-boy meets ballet, Jacob Jonas is most definitely spicing up modern dance.
Dance first introduced itself to Jacob on the Venice Beach boardwalk, where at age 13, he saw the Calypso Tumblers, a boardwalk street-performance crew with whom he later pop, locked and pirouetted his way around the world with. In 2010, he became a semi-finalist on Paula Abdul’s Live to Dance show alongside dance partner and girlfriend Jill Wilson. Then in 2012, they went on to win the National Performing Artist of the Year award from RAW Artists. After a stint under Seattle’s TONY-nominated choreo-god Donald Byrd (The Color Purple), Jacob came home to assemble his own collective of talented misfits to pursue his passion for innovative choreography. And this is all before he's old enough to rent a car.
All about stretching the boundaries of dance and making it accessible in our social media age, Jacob's latest incarnation, #CamerasandDancers, invites photographers and dancers to collaborate via Instameets by sharing fancy footwork. The Getty Museum has even taken an interest after a recent visit saw Jacob busting moves and encouraged museum-goers to blow them up on social.
If you’ve never seen dance culture beyond gyrating strangers at 1 a.m. in a seedy Hollywood dive or techno club, then allow Jacob to lead you to the most gorgeous cavorting in town. No one puts Los Angeles in a corner.
Get Citizine Updates Here 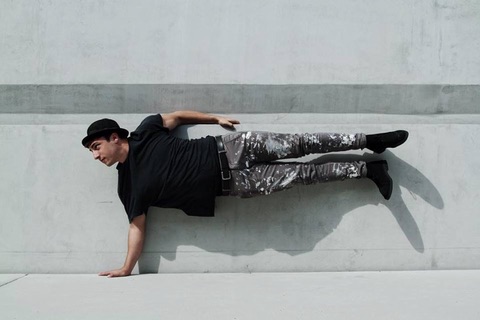 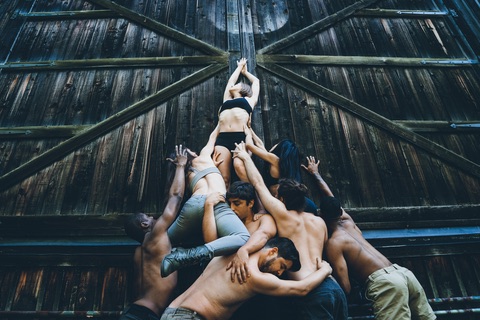 Santa Monica
Jacob Jonas: JJTC is a 21st century dance company with a focus on creating dance both for a live audience and for the camera. The company produces visceral, original work based on real-life situations, relationships and honest narrative storytelling that relates to audiences on a personal level. JJTC hosts a monthly instameet called #CamerasandDancers where photographers and dancers collaborate and share their work on Instagram. JJTC combines contemporary ballet, breakdance and acrobatic techniques. Check out Jacob and crew in action here.
Go See:  Stay tuned to Jacobjonas.com and look forth to January 13, 2017 when the company hits the The Wallis Annenberg. 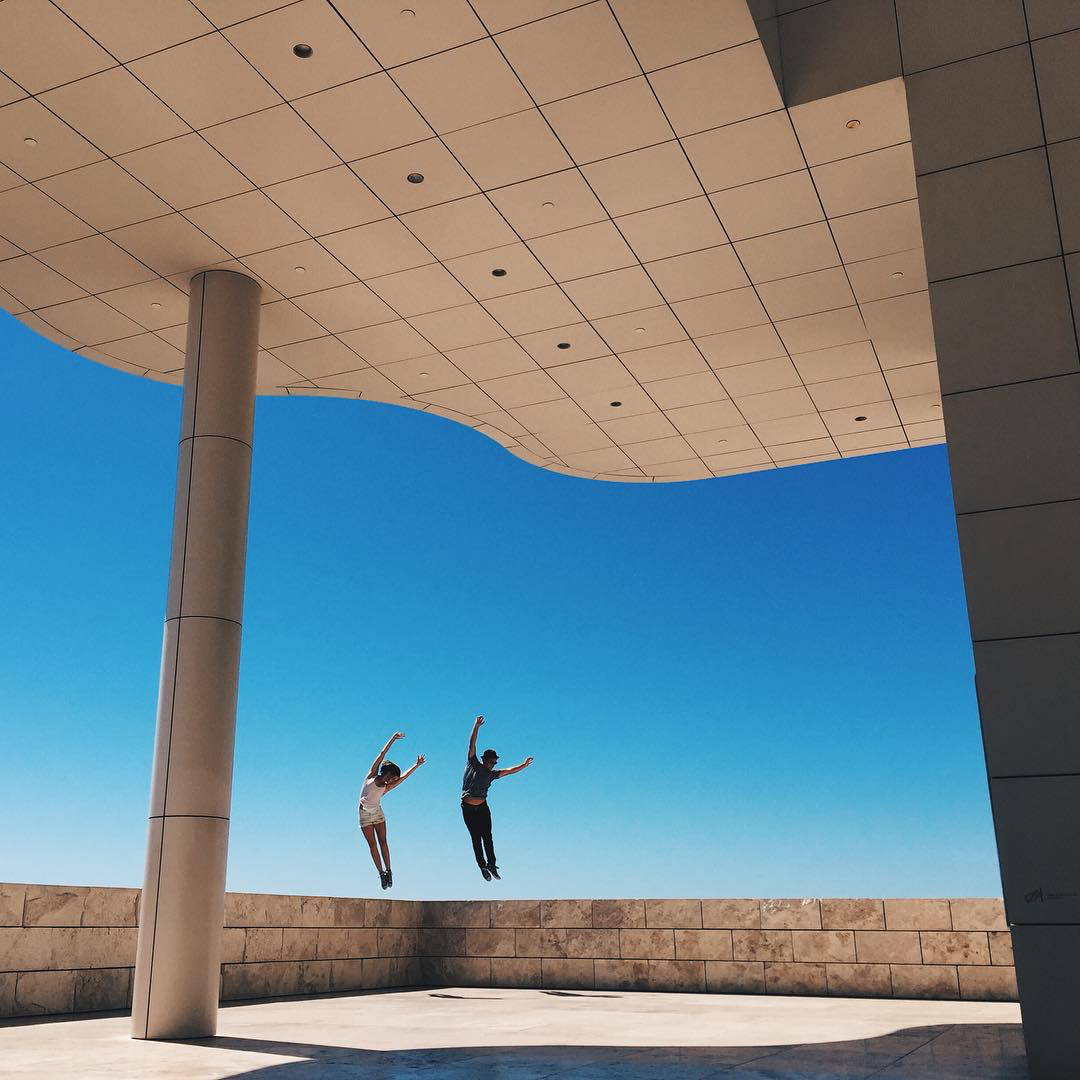 JJTC at The Getty Museum. Image courtesy of Jacob Jonas The Company

Venice
JJ: Calypso Tumblers is a street performing group based in Venice Beach. I first started dancing with this group. If you are walking along the Venice Boardwalk on the weekend you will come across this group. They are some of the best breakers and acrobats in the world who craft together comedy and great physical tricks.
Go see: Any random weekend along the Venice Boardwalk! 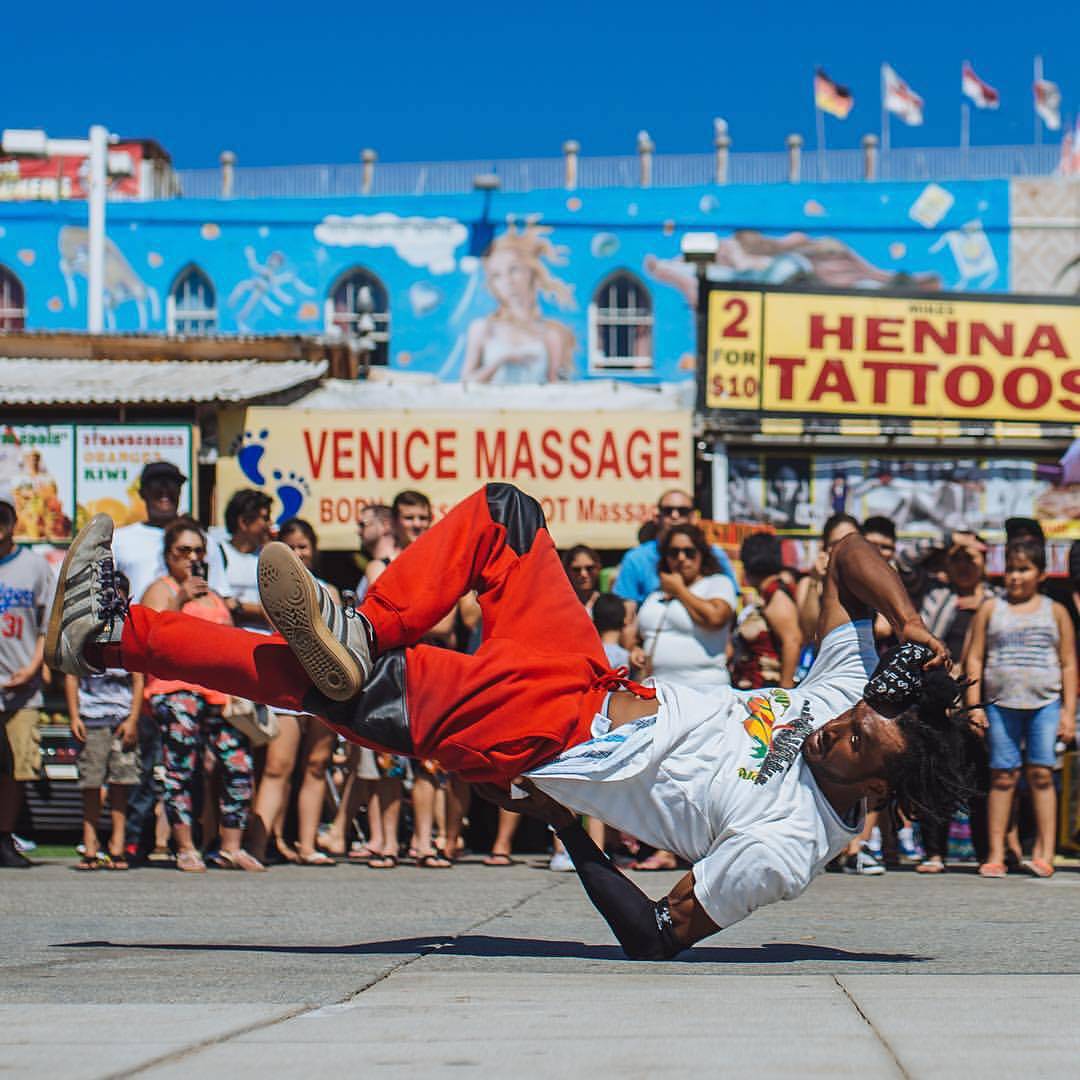 West LA
JJ: If you’re looking for the finest classically trained dancers in LA, performing historic and new works, go see Los Angeles Ballet. It is led by artistic directors Thordal Christensen and Colleen Neary and executive director Julie Whittaker—all legends in the field. Los Angeles Ballet is a true gift and role model to our city.
Go See: Romeo and Juliet at Redondo Beach Performing Arts Center on May 28 or Royce Hall UCLA on June 4. 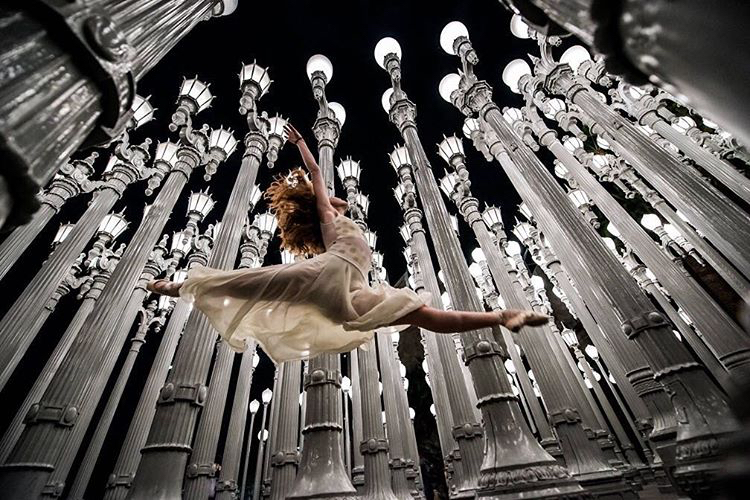 Lincoln Heights
JJ: Led by one of the most rebellious and creative minds, Jacques Heim, Diavolo brings together dance and architecture in the most beautiful way. Athleticism, unity within its cast, great leadership and the direction from Jacques combine to make work that will take your breath away. Huge set pieces move the way football players do from play to play. Expect acrobatics, breakdancing, and modern dance.
Go See: Diavolo are on tour this summer but check out their Summer Intensives to learn those signature dance/acrobatic progressions. 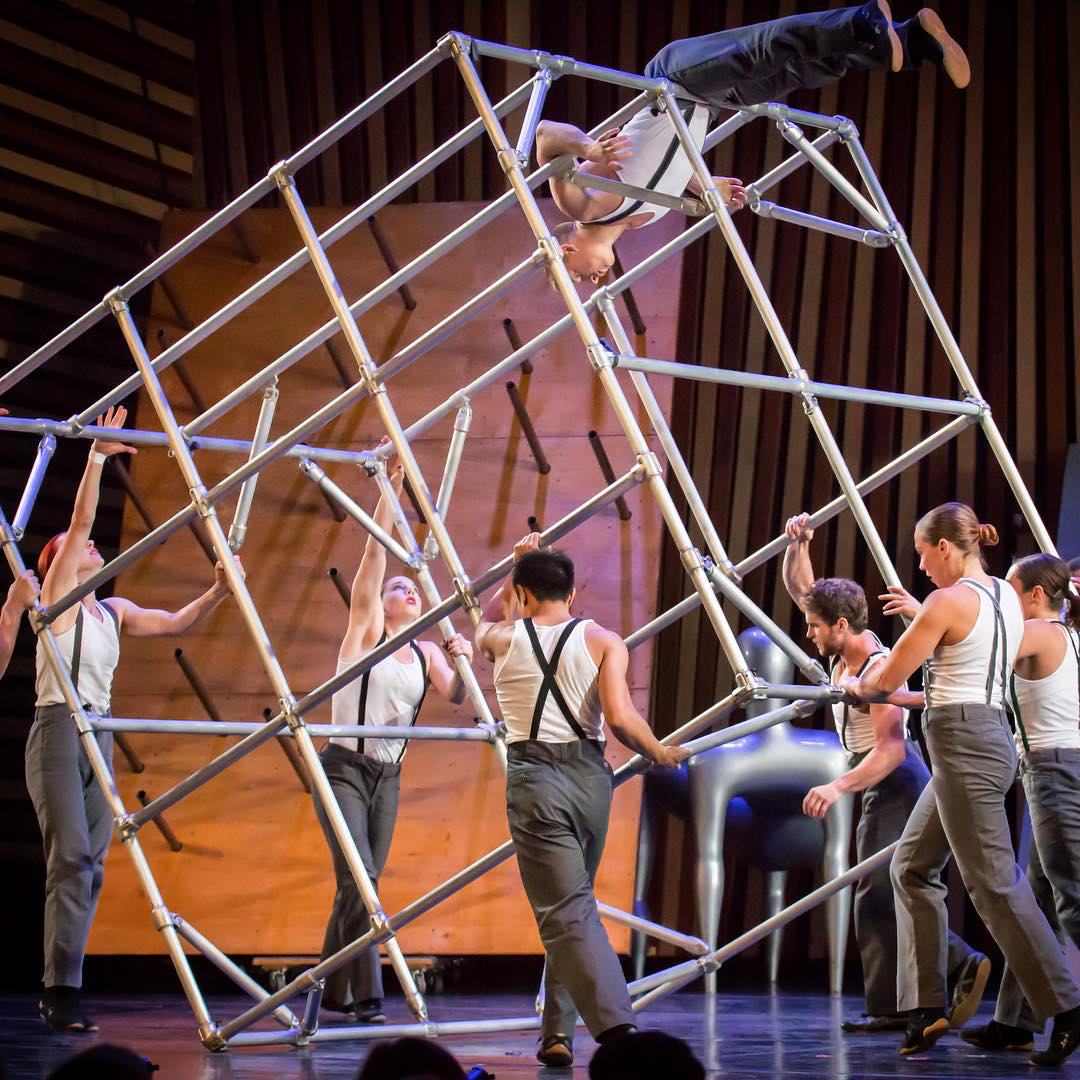 Eagle Rock and Silver Lake locations
JJ: In life, there are things that you come across that are strange yet impactful, composed yet uncomfortable, scarce yet real. Danielle Agami is the founder and artistic director of Ate9. She does all the above through her work and casting. Her company is concert contemporary dance and is made up of very different and talented individuals.
Go See: Going Solo, May 28 at Mimoda Dance Studio or LA Dances at Hollywood Bowl September 9 alongside Bodytraffic and LADP. 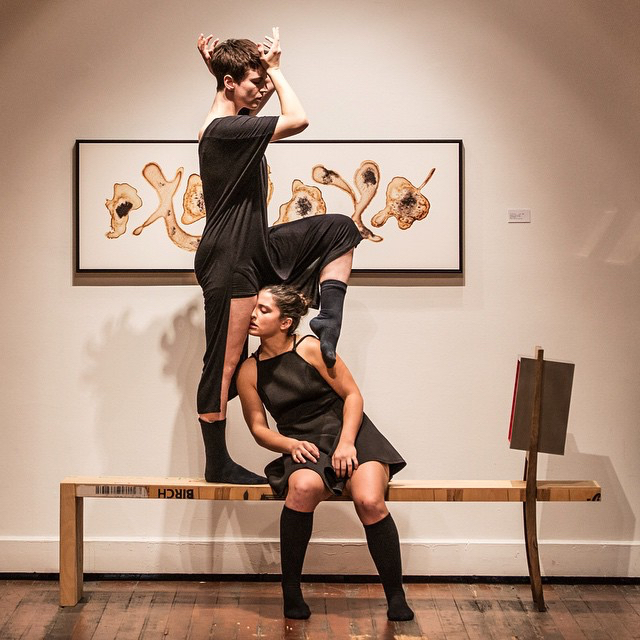 Beverly Hills
JJ: Daniel Ezralow was one of the greatest dancers and his ambition led him to start and create works with some of the best dance companies including Momix, Pilobolus, and many others. His work is a visual portfolio of contemporary and physical theater, in line with his work on stage and camera. Daniel and his company are bold and visually compelling. I look up to him for his humility.
Go See: Ezralow just finished up at The Wallis. Keep your eyes on their website 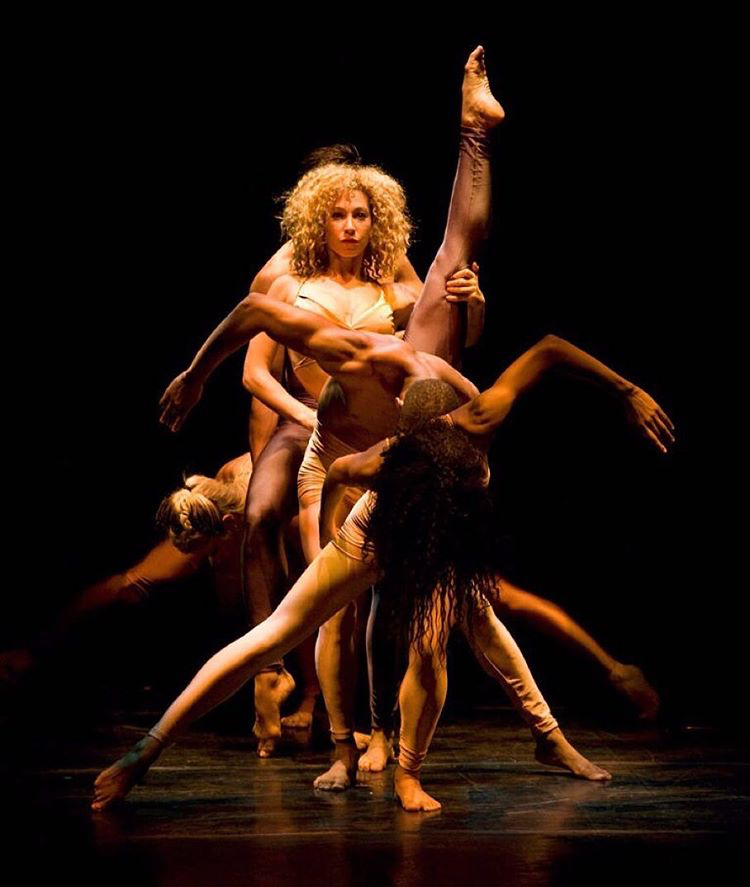 Downtown
JJ: Started and led by New York City Ballet alum, Benjamin Millepied, who has a curatorial eye for talent, a drive to make dance better, and an interest in doing the unimaginable within contemporary ballet. LADP performs around the world, with works by Benjamin and some of the best choreographers in history. LADP also is working closely with Colburn Dance School to educate the next generation of dancers.
Go See: LA Dances will feature three companies, Bodytraffic, LADP and Ate9, at the Hollywood Bowl on September 9. 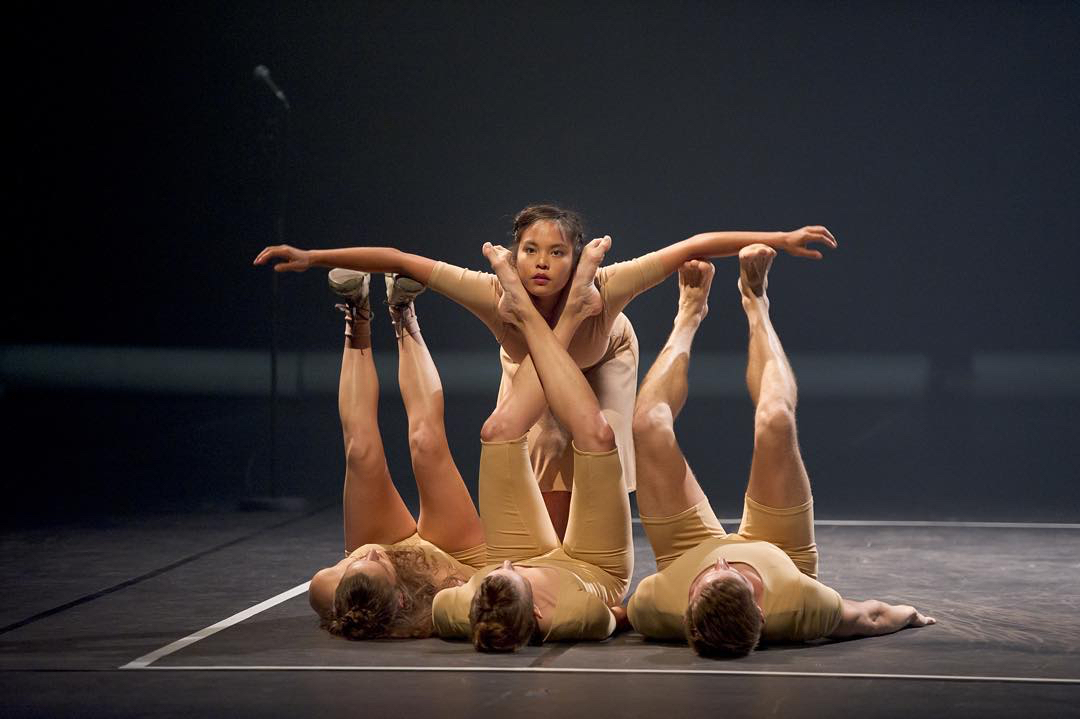 Culver City
JJ: Founded and led by Laura Karlin, Invertigo brings a great balance of comedy and physical theater to their performances. Invertigo also leads a great educational program in the community called "Dancing Through Life" for dancers and non-dancers of all levels. 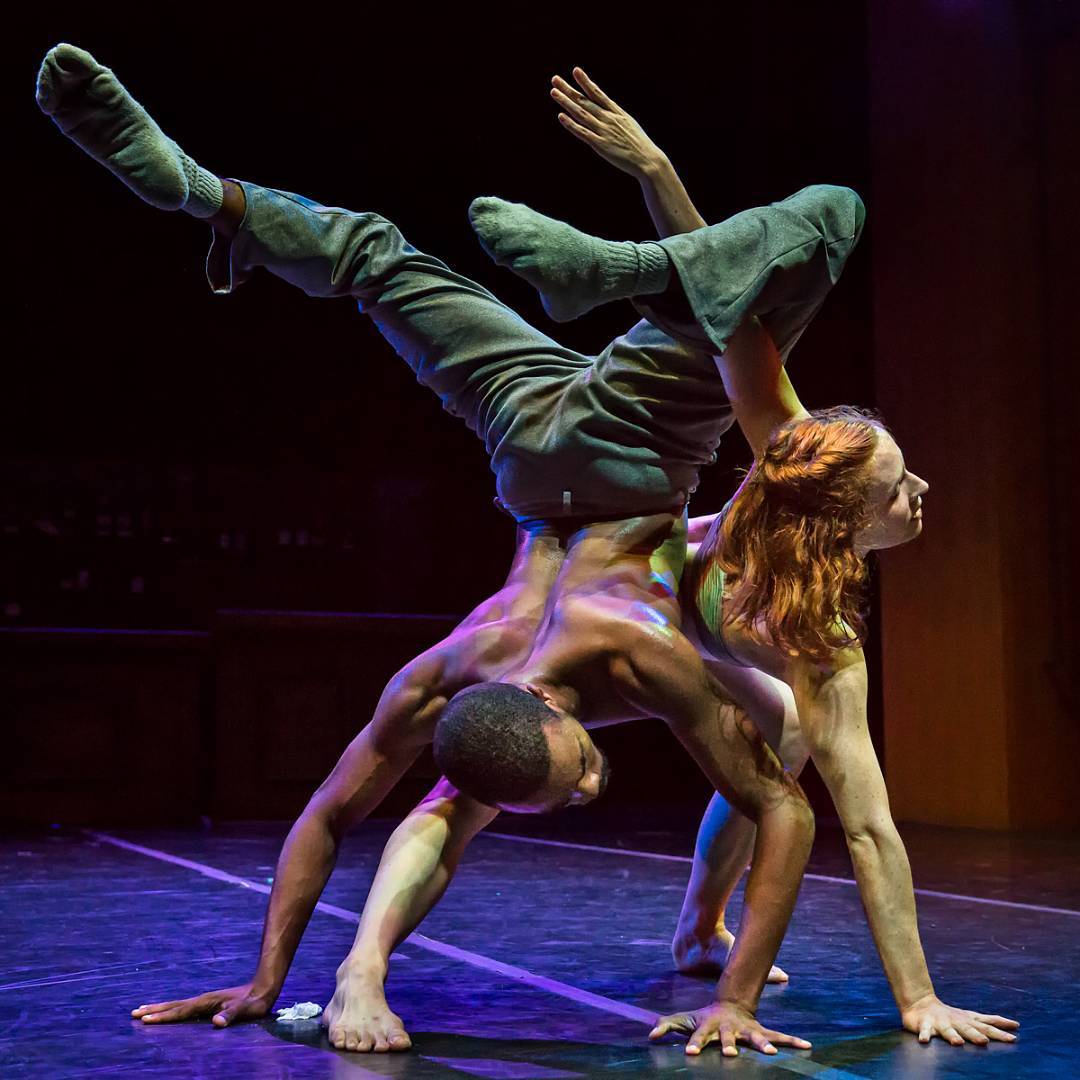 DTLA
Celebrating their 10th anniversary, this modern dance company have consistently been the hub for LA based choreographers, dancers, and artists of all disciplines to collaborate and produce fresh, innovative work that's representative of the city's vibrant culture—described as Made for LA by LA.
Go See: LACDC are currently touring New Zealand but if you’re a dancer check out their Summer Intensive beginning July 11.

Baldwin Hills/Crenshaw
Founded in 1980 in the inner city of South LA, LWDT has focused on using dance to explore social and humanitarian issues and has become one of the most admired African-American modern dance companies in the West – known for powerful, high-energy dance, unique choreography and residencies.
Go See: LWDT are currently touring Israel for the summer.

Pico-Robertson
Named “the company of the future” by The Joyce Theater Foundation, Dance Magazine’s 25 to Watch in 2013 and Best of Culture by the Los Angeles Times, Bodytraffic is recognized for their high quality of work, energy, athleticism, and aesthetic innovation.
Go See: LA Dances will feature three companies, Bodytraffic, LADP and Ate9, at the Hollywood Bowl on September 9. 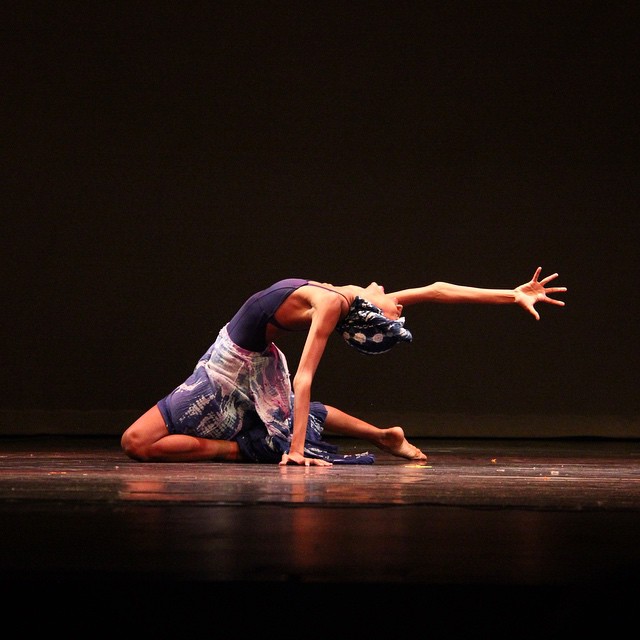 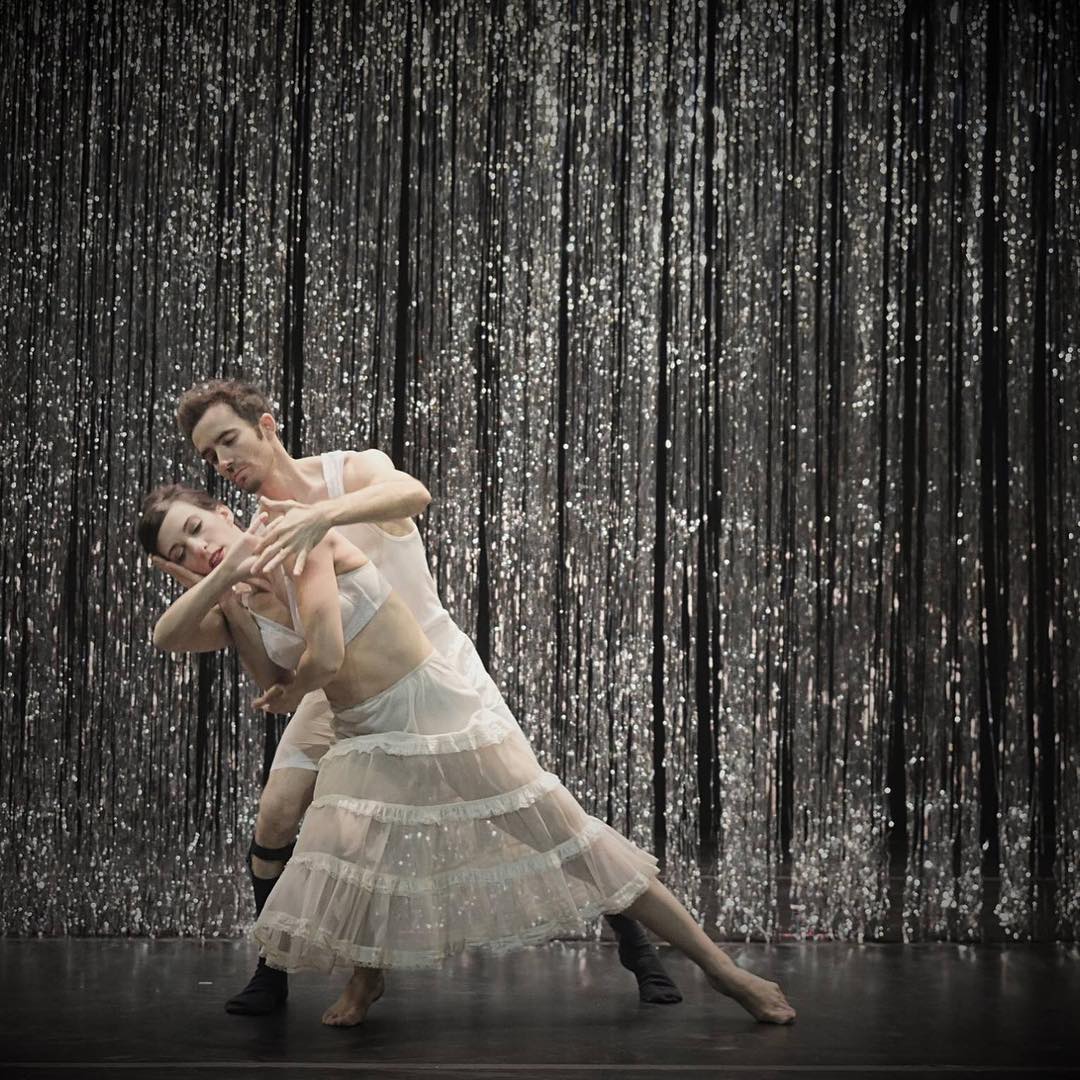 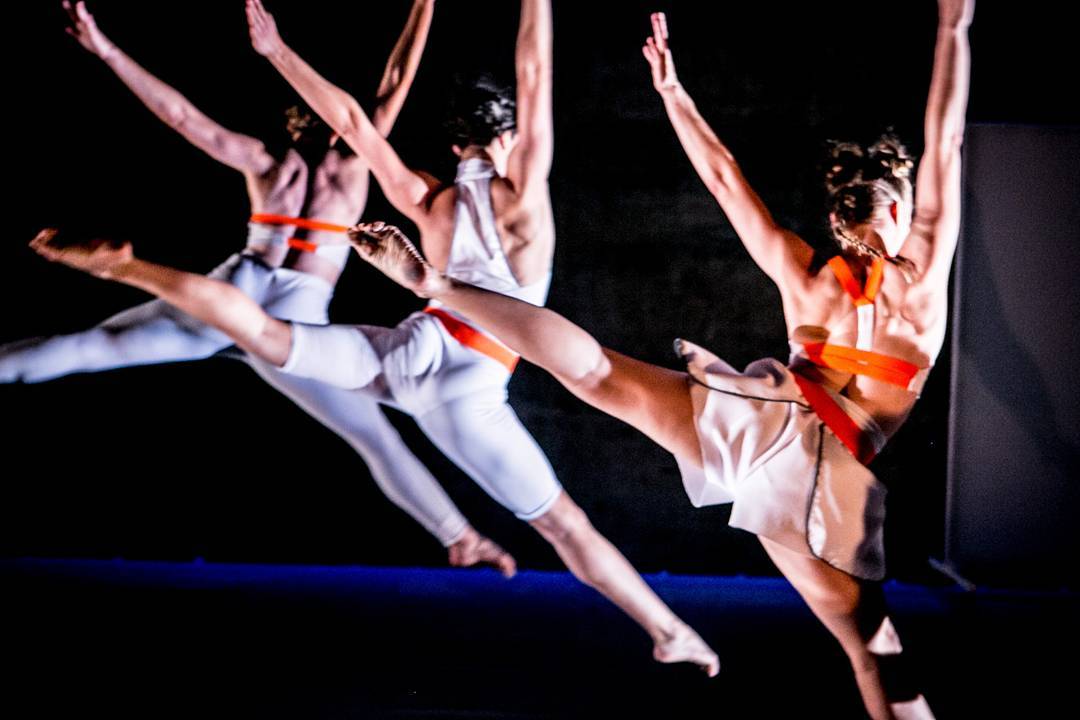 Belinda Gosbee is an Aussie writer, actress and coffee snob based in Los Angeles. The highlight of her (short-lived) dance career was a chair-straddling routine to Prince’s Cream in high school. It was deemed too provocative. Follow her jaunts on twitter @belindagosbee or instagram @gos22