Where the KTown Cowboys Party in Koreatown

With their movie hitting theaters, the Ktown Cowboys show us where the real party is at in Los Angeles’ Koreatown

Soju, girls, karaoke and bromantic debauchery! Sounds like another Friday night in the apartment upstairs, right? Close enough. Enter Ktown Cowboys, the web series-turned-feature film, premiers on March 18 at CGV Cinemas in LA and other US cities.
The coming-of-age dramedy is essentially about, well, guys being guys and running a muck in Los Angeles’ Koreatown. According to director Daniel Park, Ktown Cowboys is based on far too many real-life exploits in the East LA enclave. But more than the buck-wild nights, the real heart of the film pulses in its portrayal of deep-rooted friendship between five guys. Even a stint in jail is no biggie when your friends have your back, right?
The film debuted at SXSW in Austin last year where it was hailed for highlighting a unique part of LA, one that we Angelenos love to hang out in. Guaranteed to have you Gnam-gnam-stylin’ with its K-Pop soundtrack, Ktown Cowboys’ is produced in-part by The Hangover’s favorite nut job, Ken Jeong. Yep, he makes a cameo. 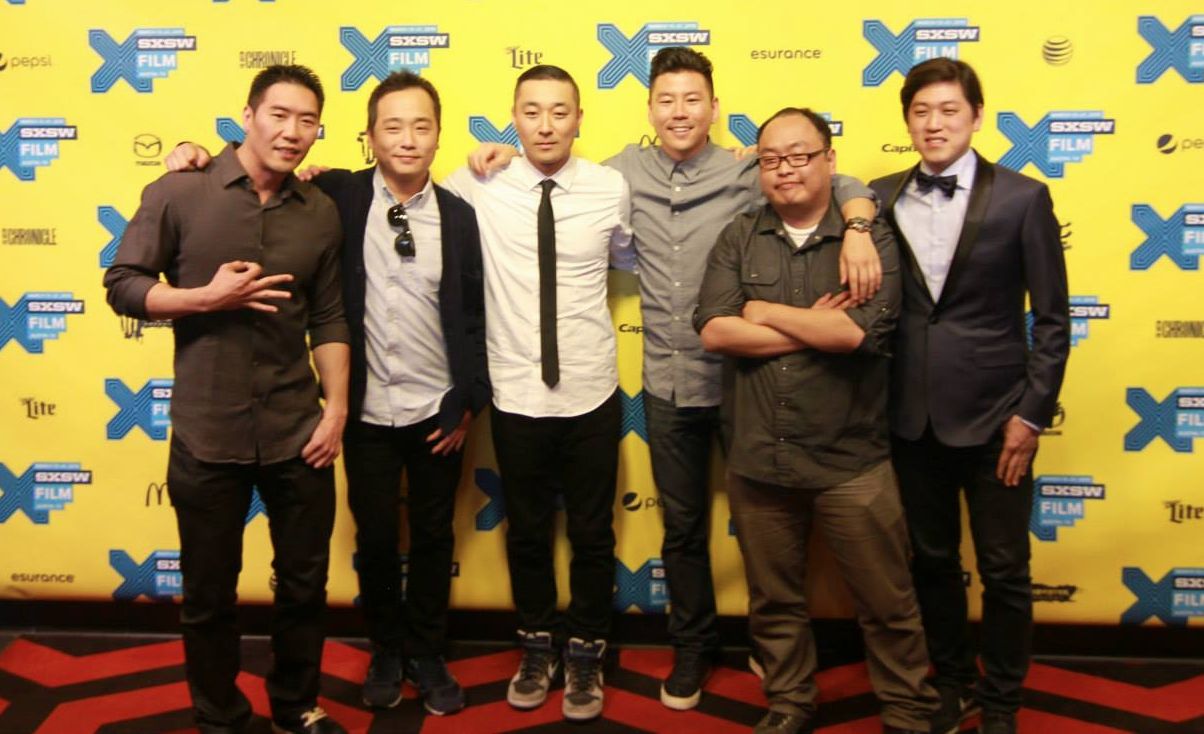 To celebrate their movie release, we let the boys take us on a private bender through K-town, like only they can do. Follow this guide by the Entourage-style crew—Peter Jae, Shane Yoon, Danny Cho, Bobby Choy and Sunn Wee—on how to do a baller night in Koreatown:
Get Citizine Updates Here

$$
Sunn Wee: My favorite spot to eat in Ktown is the House of Chigae on 8th and Berendo. Nothing goes better with Soju than a hot bowl of spicy kimchi stew. A tip for non-Koreans: make sure to address the waitresses as "noona" if you're a guy and "unni" if you’re a girl. It means older sister in Korean. The older waitresses like it and it gets their attention. 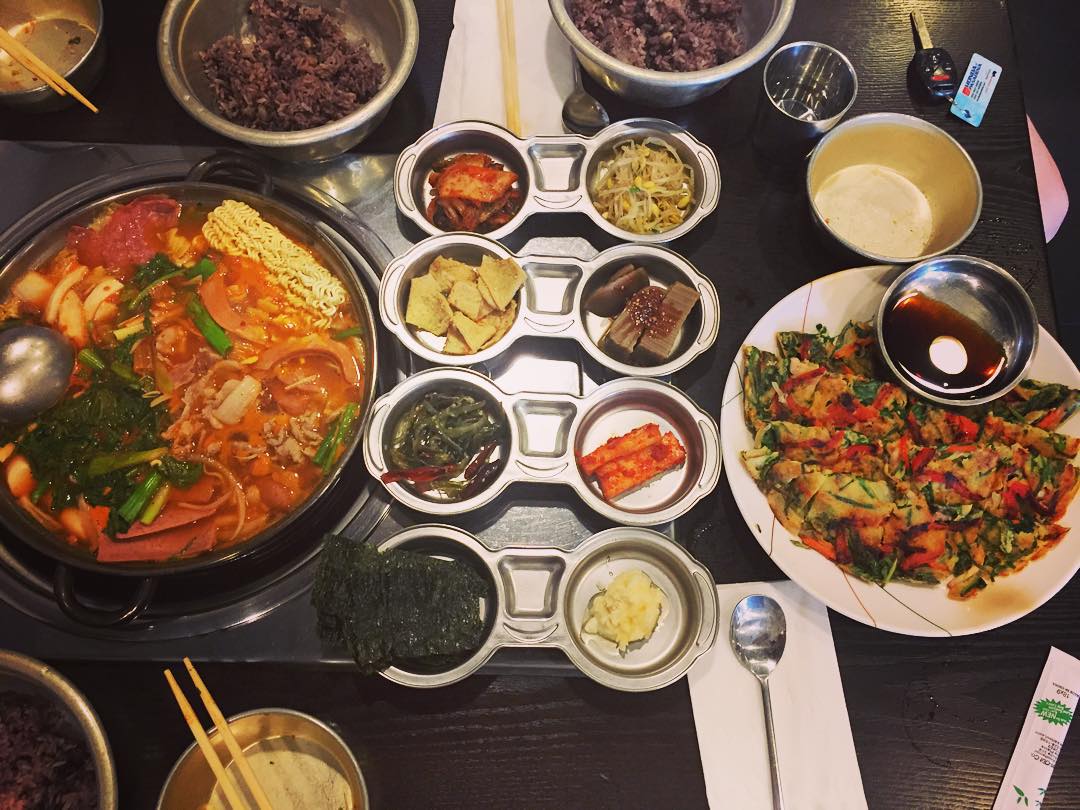 $$
Danny Cho: My favorite post-party restaurant is Sun Nong Dan. Their oxtail soup is great and perfect to sober you up. Also, they serve good galbi jjim (braised beef stew), which is my favorite Korean entrée. Oh and the place is open 24/7.
Peter Jae: Any restaurant in the plaza where Cafe Bleu is. There's a hand full of 24/7 spots that stay open all night with quality food. Be prepared to see cars pulling up after 2 a.m. with drunk fools wobbling out. 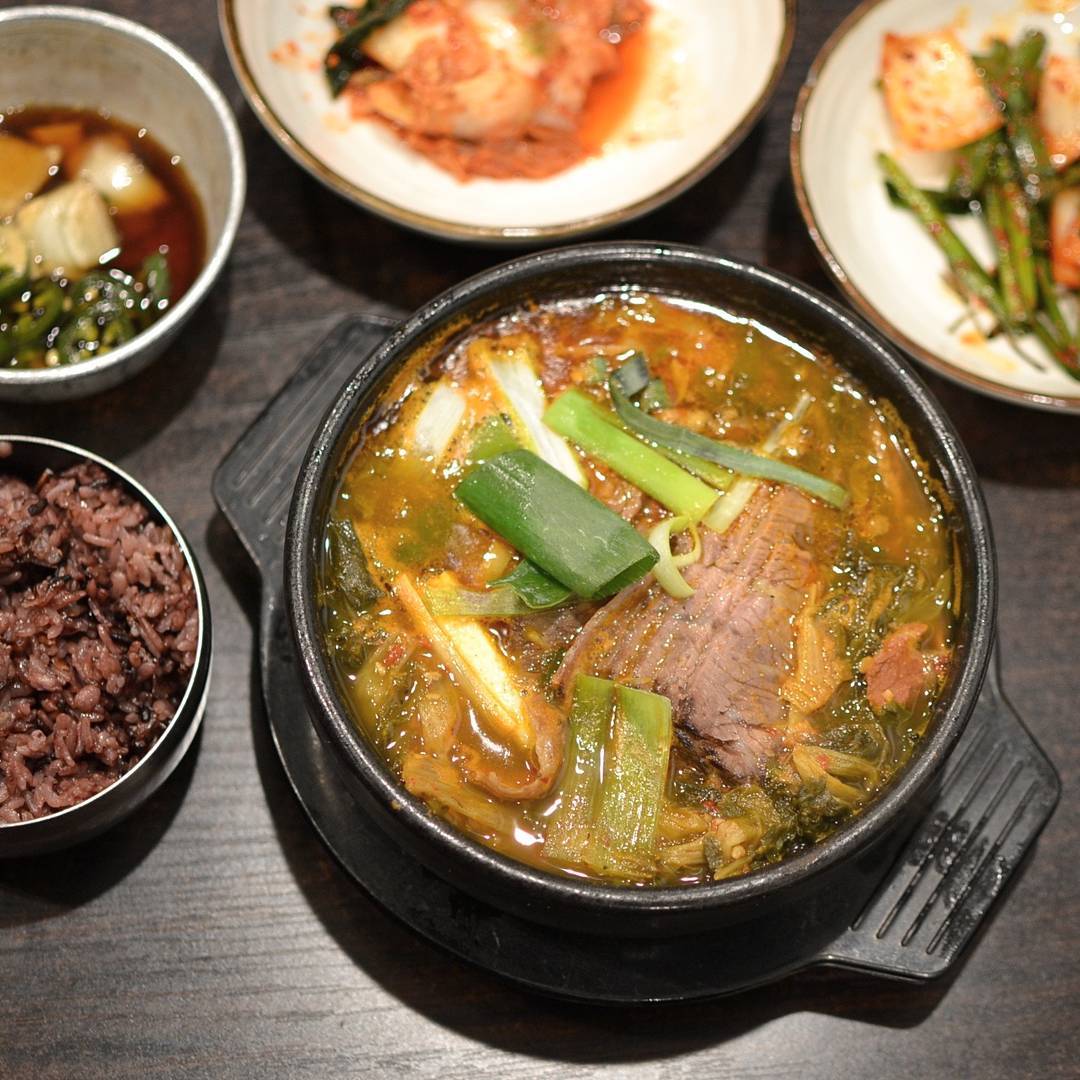 $$
Shane Yoon: Start at DGM AKA DwitGolMok AKA Back Alley. Order Spam ‘n Eggs and lots of soju. Offer your waiter a shot. End up at karaoke. Recover with some sullungtang AKA beef soup at Sun Nong Dan. Repeat. 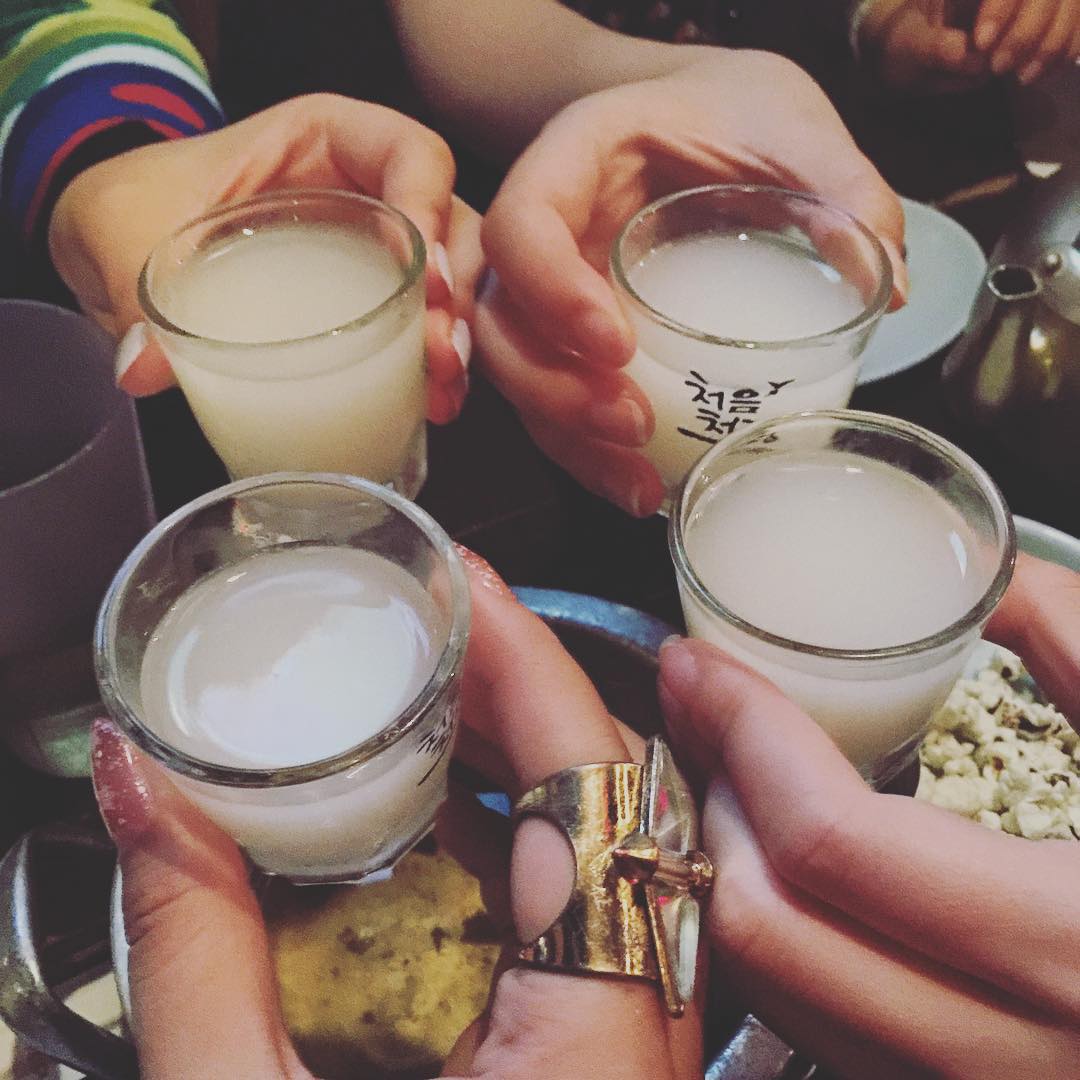 $$
Peter Jae: Cafe Bleu is like the Cheers of Ktown. It's the longest running bar by the same owner. It has a very friendly, homey vibe because of its good mix of loyal regulars and visitors. Best scotch selection and prices in Ktown, hands down. Ask for Pedro! 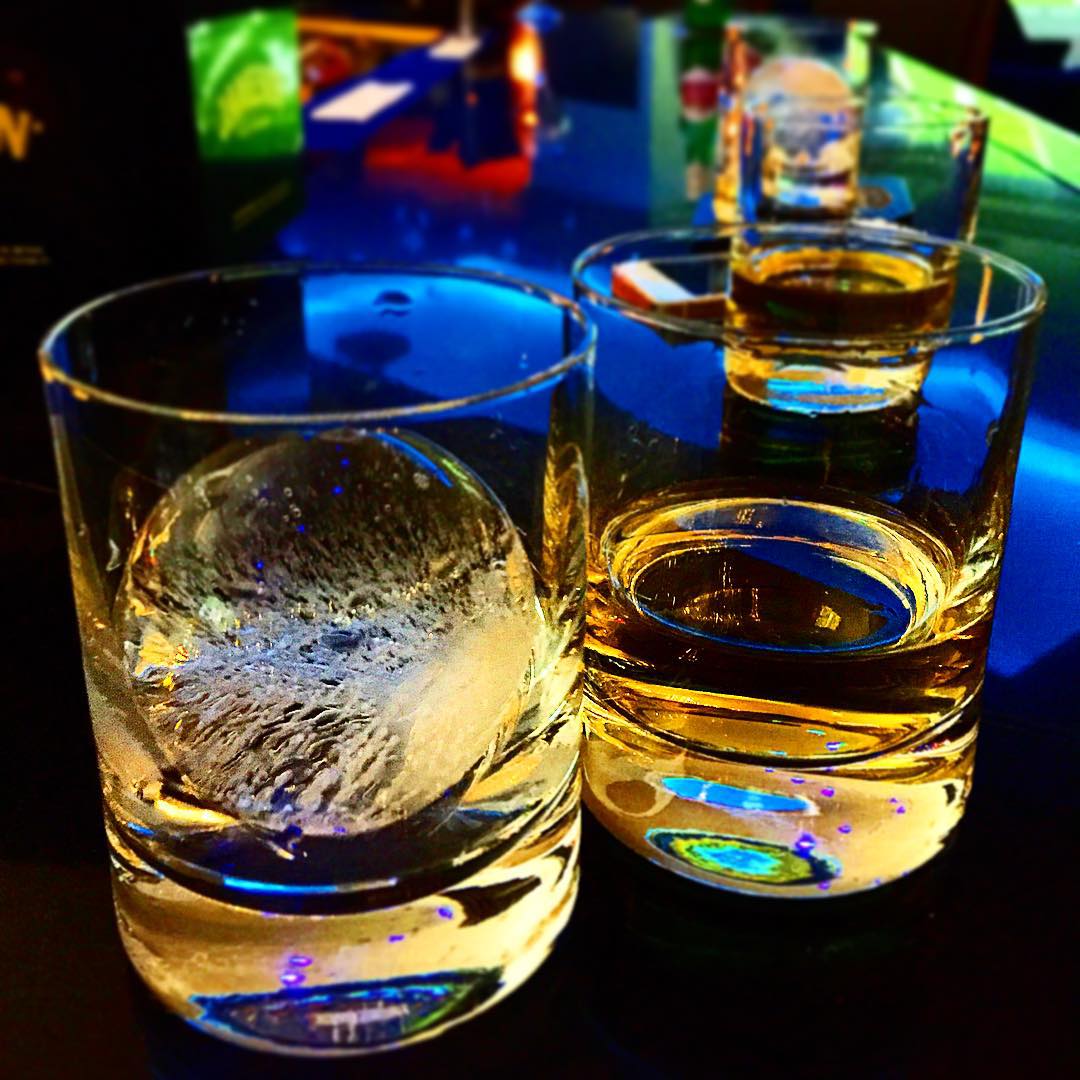 $$
Peter Jae: Lock & Key has a good mix of craft beers and mixologists that make good cocktails. It just takes forever to get a drink so you have to weigh out your pros and cons. 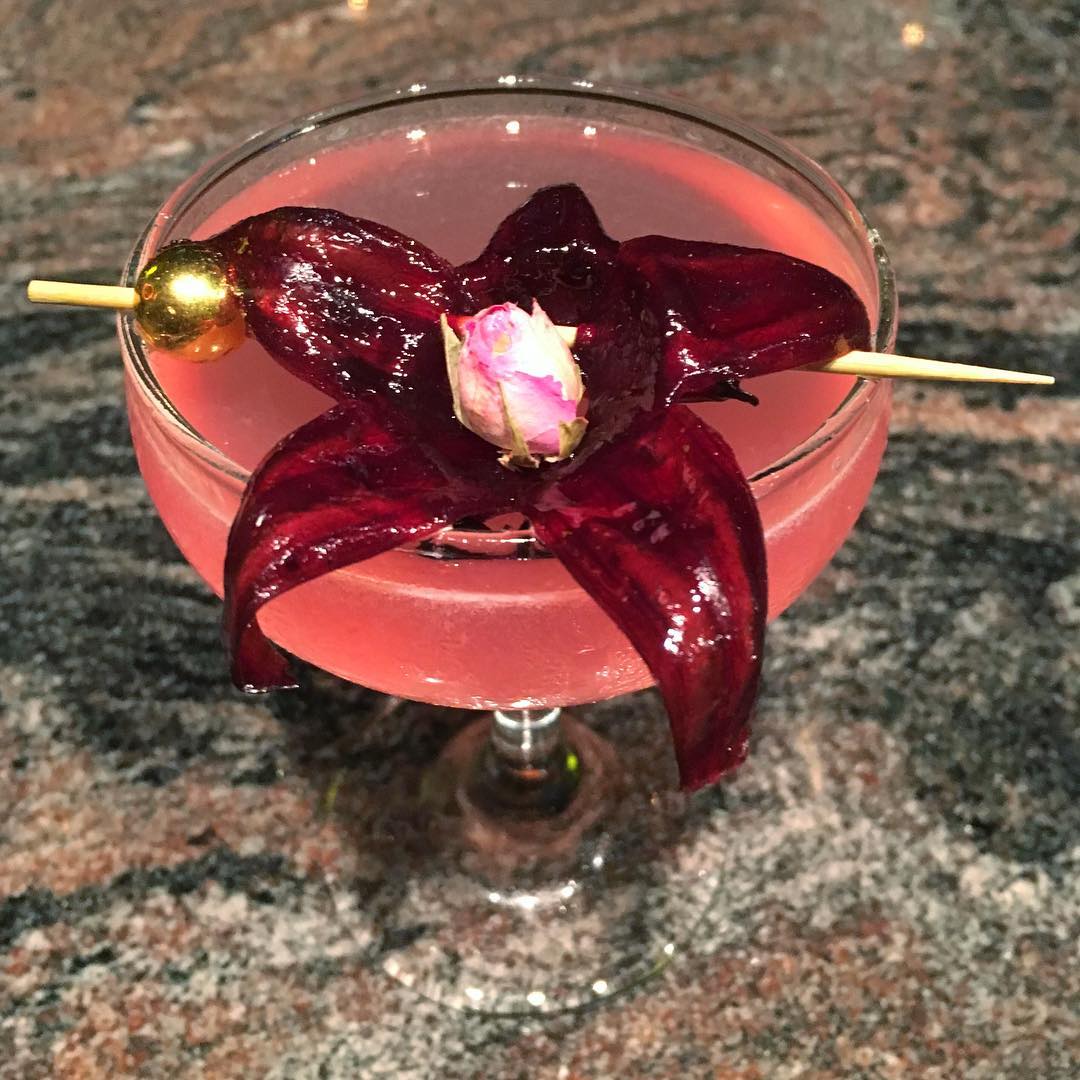 The Winter Rose cocktail at The Lock & Key, Image courtesy of @lockandkeyla

$$
Peter Jae: These days, everyone goes to The Line Hotel. With live DJ sets at the POT Lobby Bar and Karaoke at Break Room 86, there's always great music & dancing at the Line. 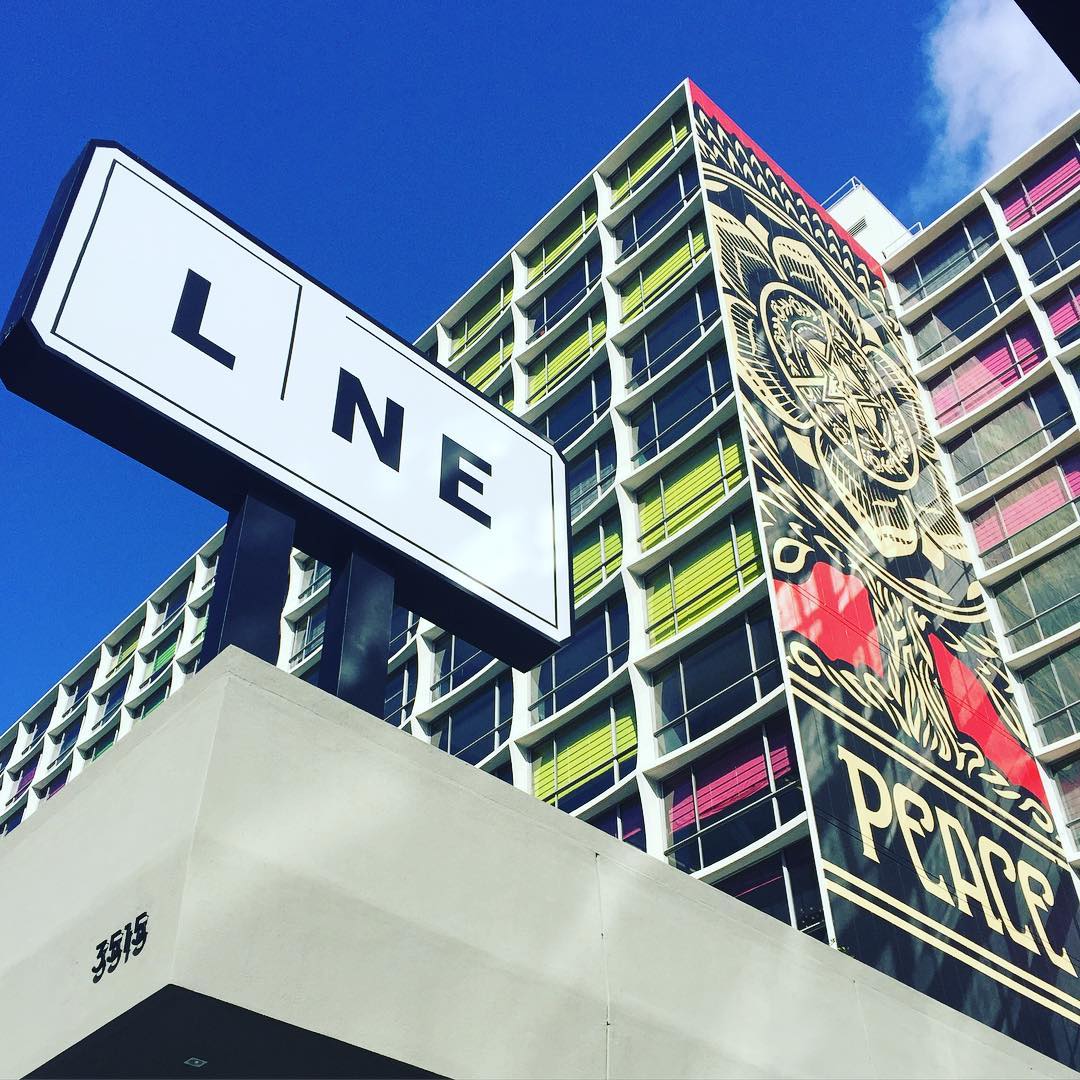 The Line, Image courtesy of @scolindres

$$
Bobby Choy: There's an open air karaoke pub called Cafe Brass Monkey smack in the middle of Ktown that is almost never dull. You'd never know it was there unless someone either brought you there one reckless night or you had heard about it from a friend who had heard it from a guy sitting at the table next to them at some random breakfast joint, hungover. 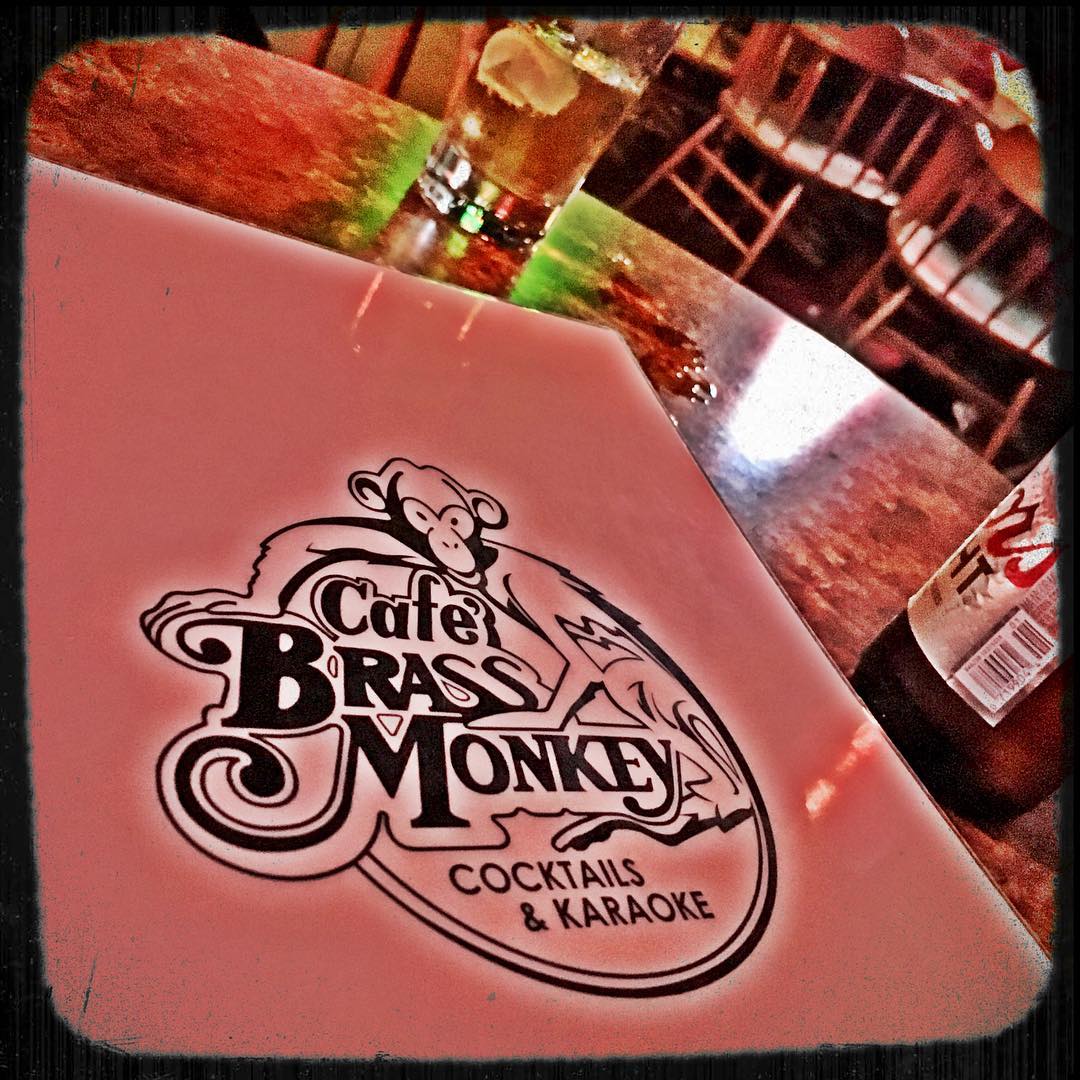 $$$
Peter Jae: Is this a set-up from the Vice Police? Lol. There's a plethora of karaoke spots all over Ktown. If you go after hours, you need to know a waiter's number to call in advance, but these days the cops have been cracking down. As far as names ... snitches get stitches...There's RAIN Karaoke , Shrine, and Recital, all of which are on the more classy side. Then there's the hole in the walls like Chorus Music Studio and Basic. All are fun. 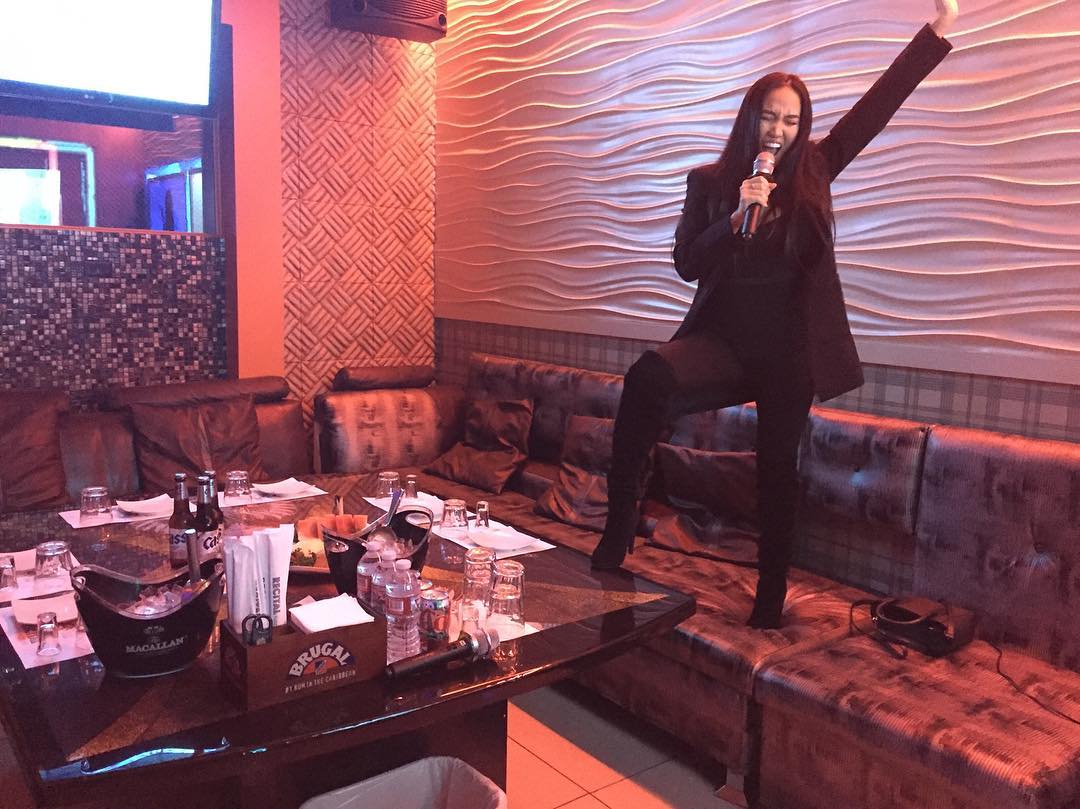 $$
Peter Jae: Wi Spa. Great for when you're too wasted to drive and need a place to crash. 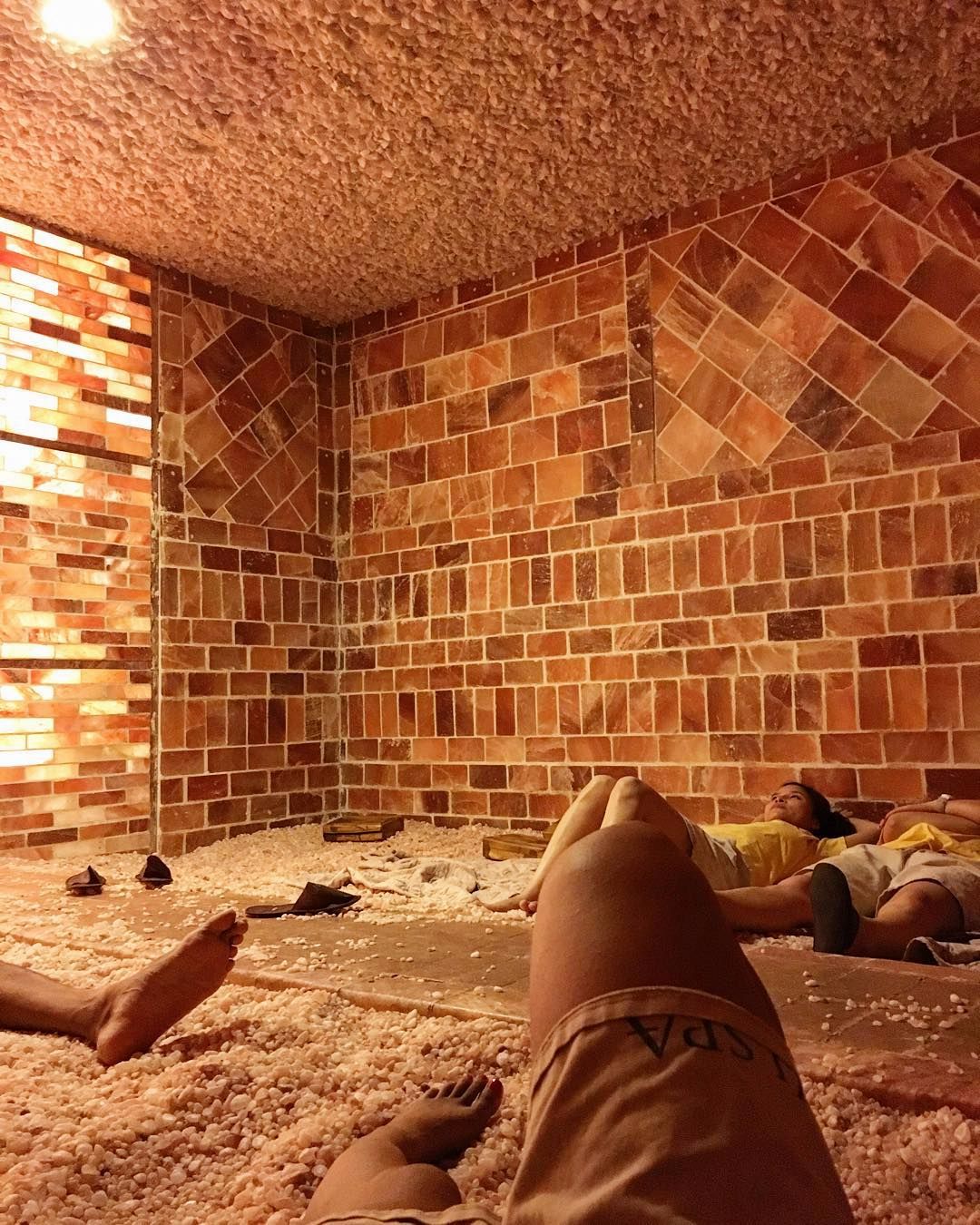 The salt sauna at Wi Spa, Image courtesy of @hilarybanksflyy

$$
Peter Jae: I like to go to H.K. Mart on Western. It feels run down but I always find whatever I need. Plus, I don’t have to worry about parking. 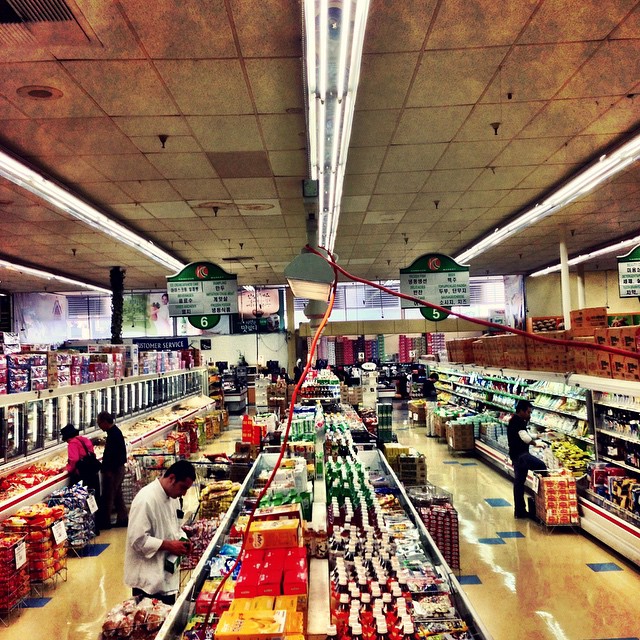 Belinda Gosbee is an Aussie writer, actress and coffee snob based in Los Angeles, who believes if everyone nuded up at Wi Spa more often we’d be closer to world peace. Follow her jaunts on twitter @belindagosbee or instagram @gos22