Salt, bones, and toxic froth. Sounds beautiful doesn’t it? If you say no, you’d be dead wrong.

It’s Saturday morning and a day of adventure awaits. I throw a few random things into a duffle bag: PJs, sandals, high heels, homemade horns—you know, the usual stuff for taking a quick trip to the desert. One o’clock rolls around just as my friend pulls into the driveway. It’s off to the Salton Sea for a mini getaway!
Although it’s probably not very high on most people’s list for a relaxing vacation, Salton Sea seemed like the perfect place for an impromptu Ichor Sisters photoshoot. Any strange and unusual backdrop for style photography will do, but the more bones, the merrier! 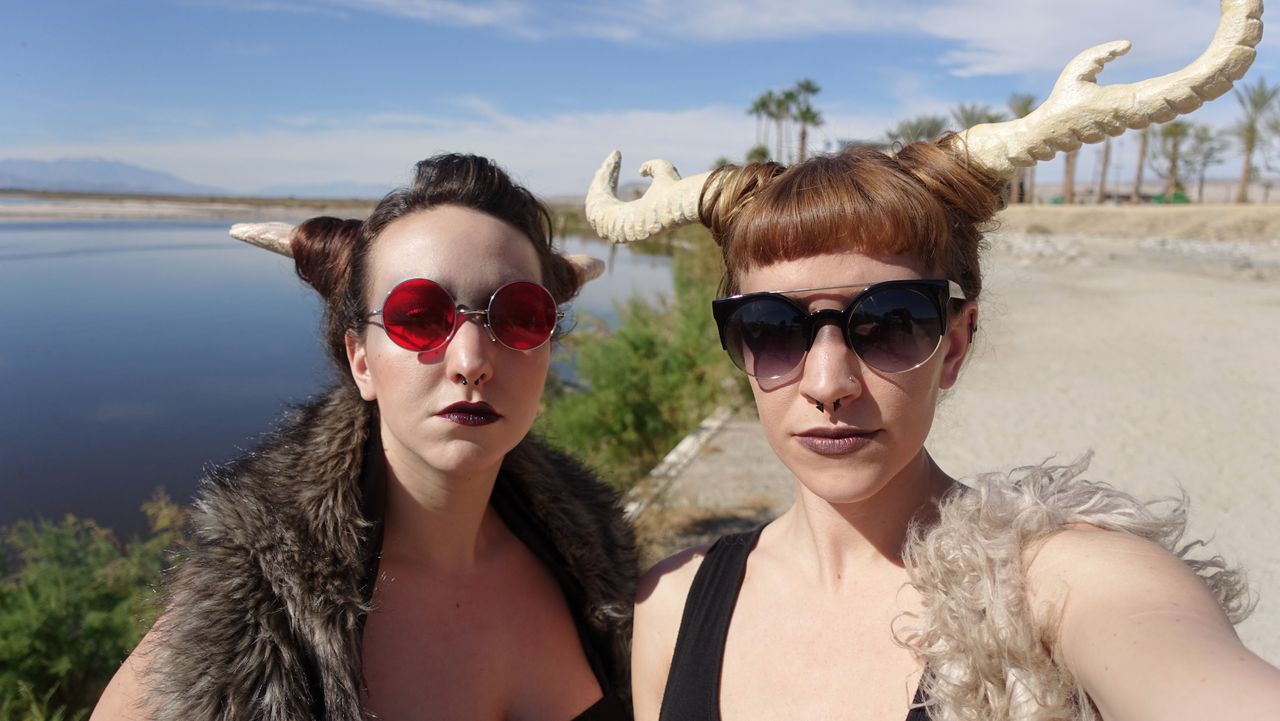 For those who don’t know, let’s review the facts: The Salton Sea is “a shallow, saline, endorheic rift lake located directly on the San Andreas Fault, predominantly in California's Imperial and Coachella valleys.” Basically, the Salton Sea is a lake accidentally created by the California Development Company in 1905 to divert water for farming. Much later, it became a beautiful resort community and popular weekend celebrity getaway in the 1950s through the late 70s. 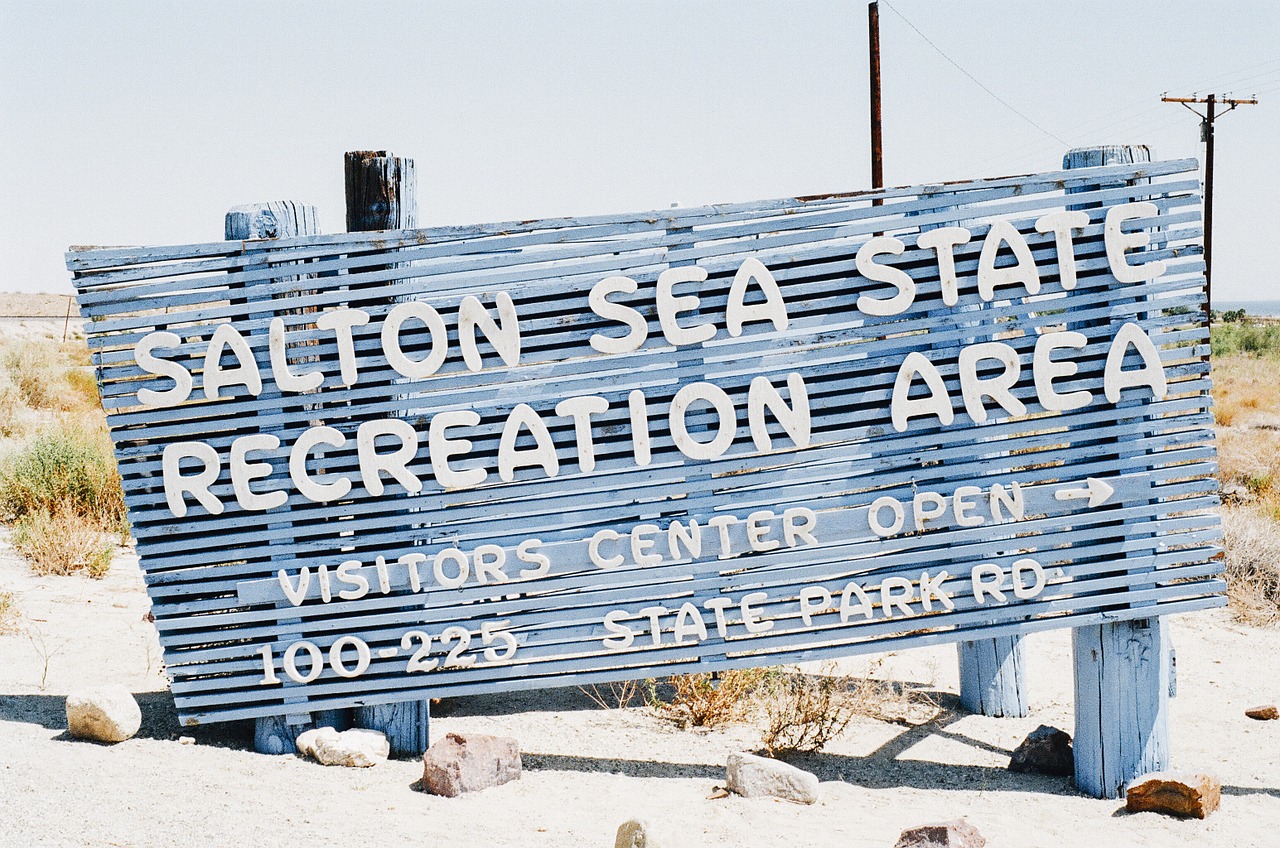 Vintage signage from the once prosperous vacation hotspot.

Then around 1980, due to its geographic location combined with the saline water baking in the desert sun at extremely high temperatures, the vast body of water turned into a toxic sludge pool. This zapped all signs of life in and around it in a matter of months! (It’s also the title of a surprisingly good movie starring Val Kilmer and the location of a new indie TV series in the works.)

As we head southeast across the barren landscape, the above facts are pretty much all I know about our destination ahead—those and the promise of fishbone-covered beaches. However, the stories I had heard about the morbid landscape we set out to photograph would not even remotely prepare me for what was really in store. We roll down the windows and blast ambient metal as we zip past palm trees and small towns, then eventually–a landscape of desolate nothingness comes into view.
My friend, who had visited before, had mapped out our agenda:
Day 1 - Salton Sea Beach to catch golden hour and photograph the sunset
Day 2 - Head to the North Shore to explore the “far side” of the lake
We turn off the main road at the small “Salton Sea Beach” sign and proceed down a dusty path. From a distance, the landscape looks pretty parched: abandoned mobile homes and remnants of a once thriving community litter the roadside. 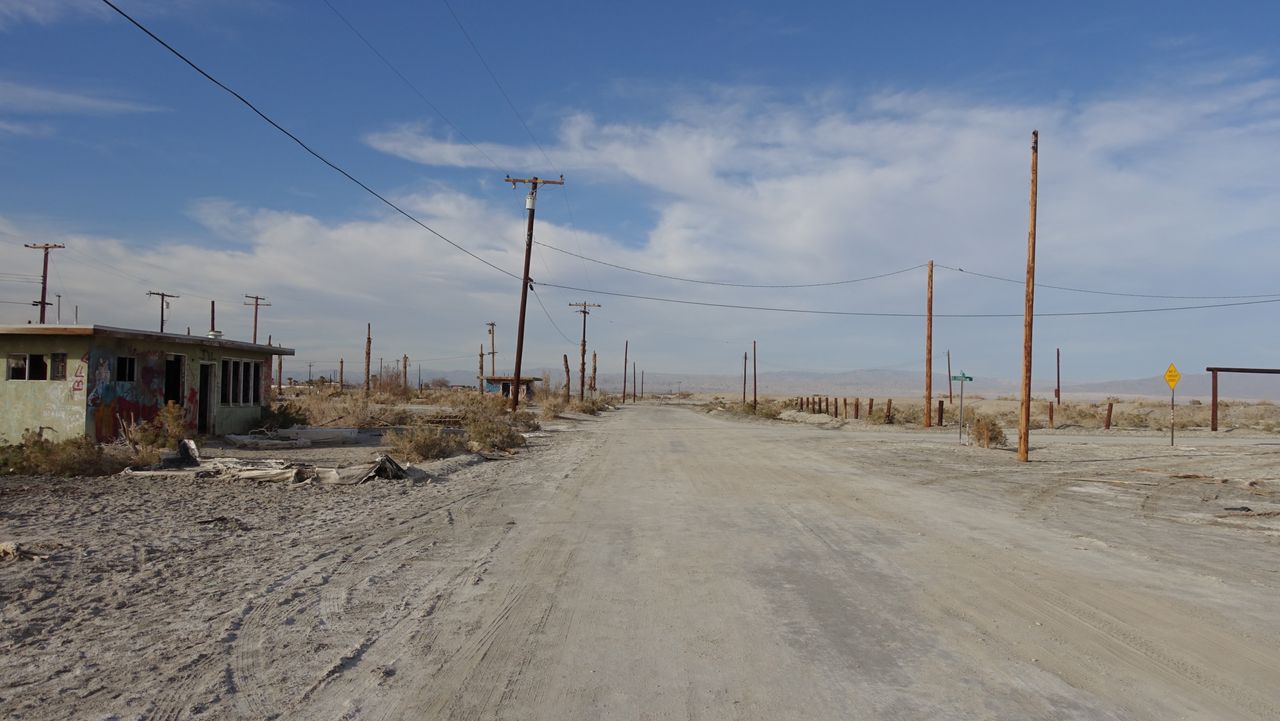 I step out of the car and stretch. The sun is still hot and bright when we arrive. Since I’m originally from the East Coast, I’m always surprised by the intensity of California sun. 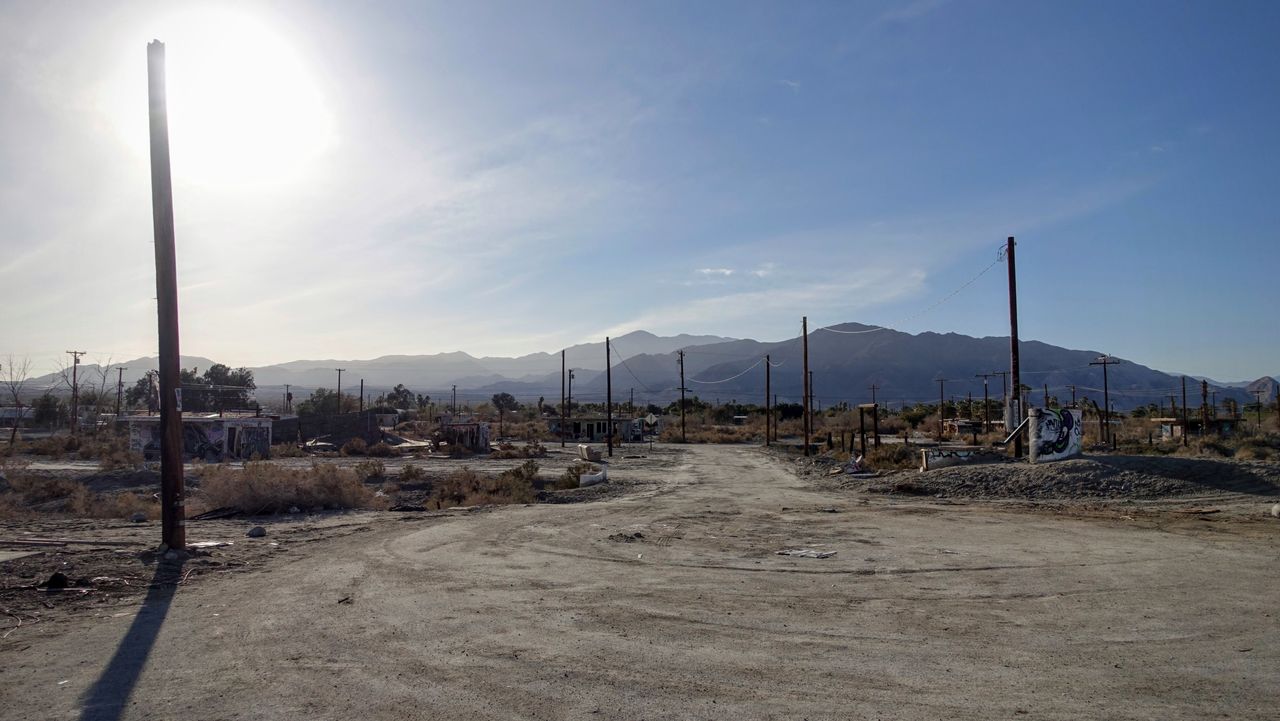 Camera in hand, exploration of the apocalyptic landscape begins. Instantly, I’m greeted by a wafting stench of dead fish, the smell is strong and unpleasant, but not unbearable.

Seat by the sea

A few yards from the car, there it is in all its glory: the disturbingly placid and strangely beautiful Salton Sea. 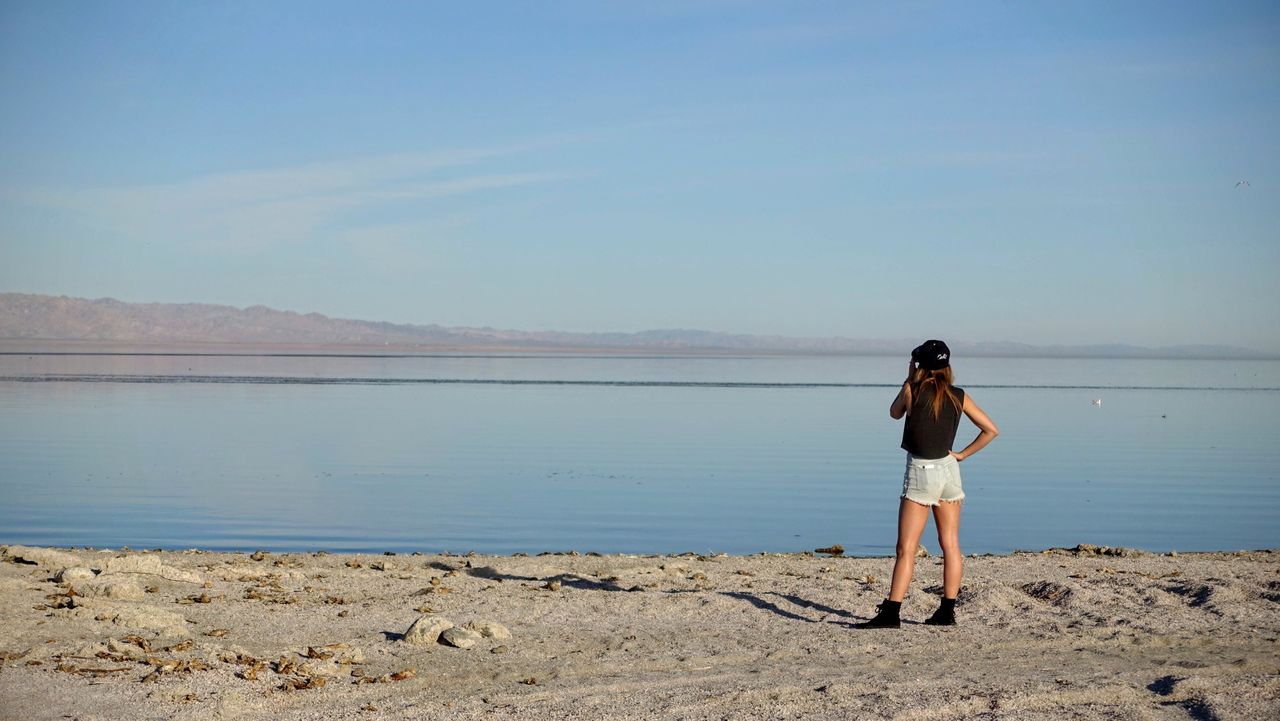 The landscape is surreal. My feet sink into sun-bleached ‘sand’– a charming mix of salt, fishbones and dead barnacles. 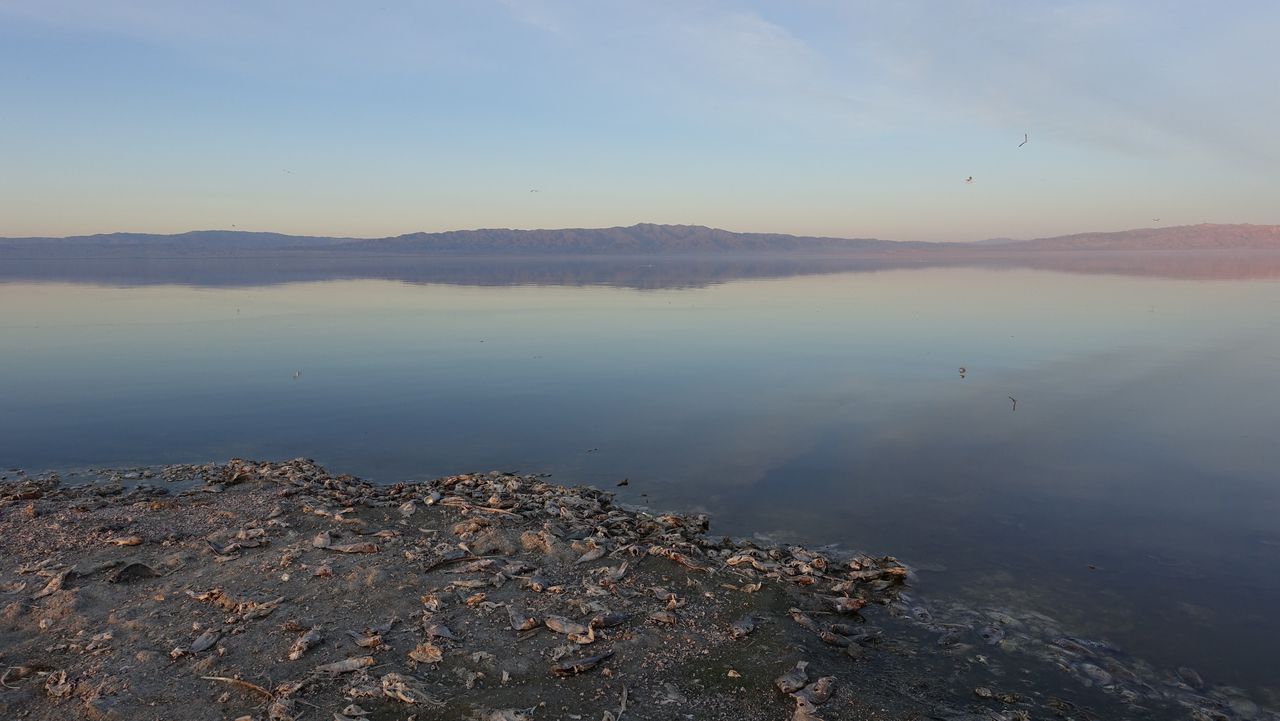 I quickly learn my shoe choice was not the best— should have gone with something more … waterproof. 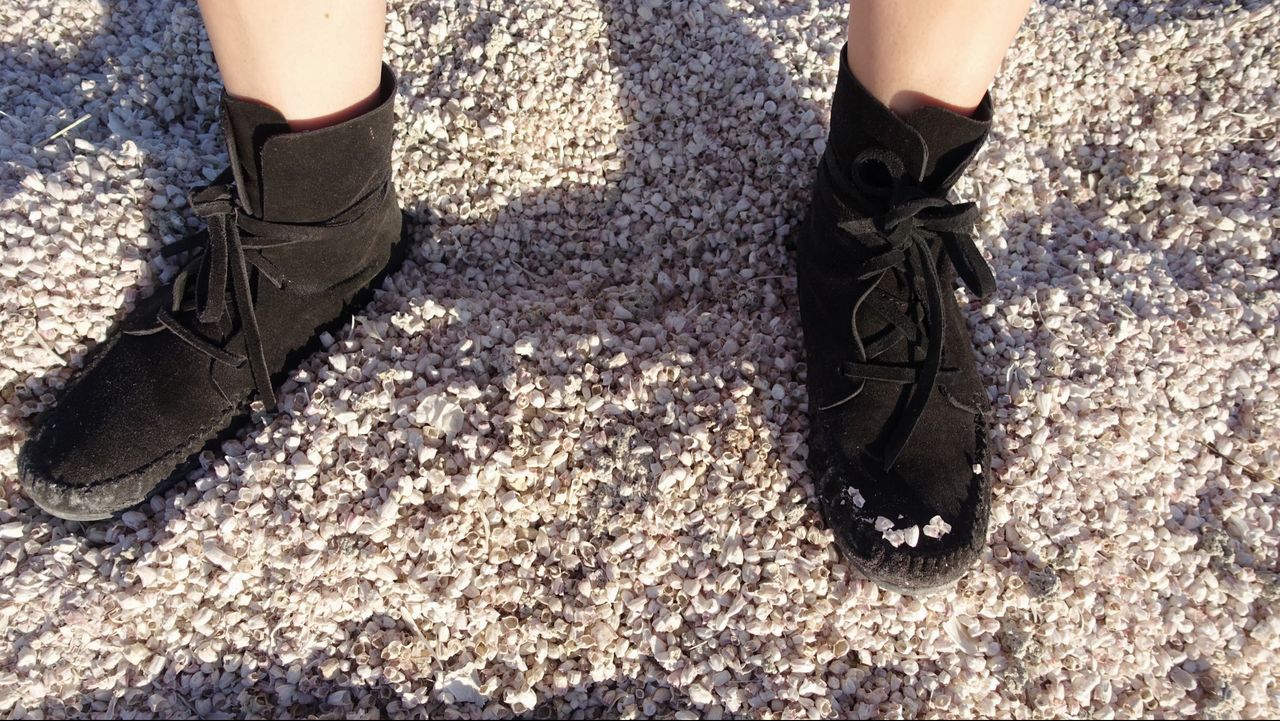 Note to self: next time bring boots

Roaming the toxic frothed shores, I marvel at the idea that this was once a hotspot for celebrities to escape for the weekend. 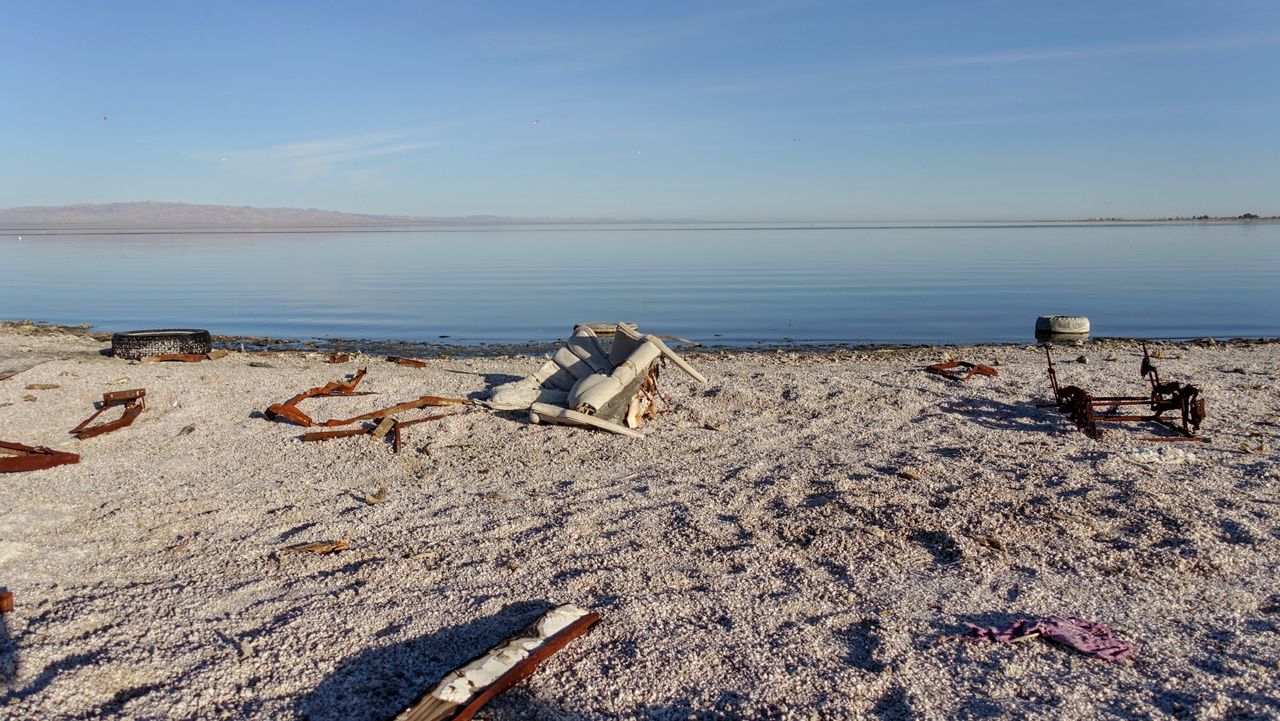 With the water’s edge still covered in decaying fish corpses, it’s hard to imagine Marilyn Monroe prancing around in a two-piece. 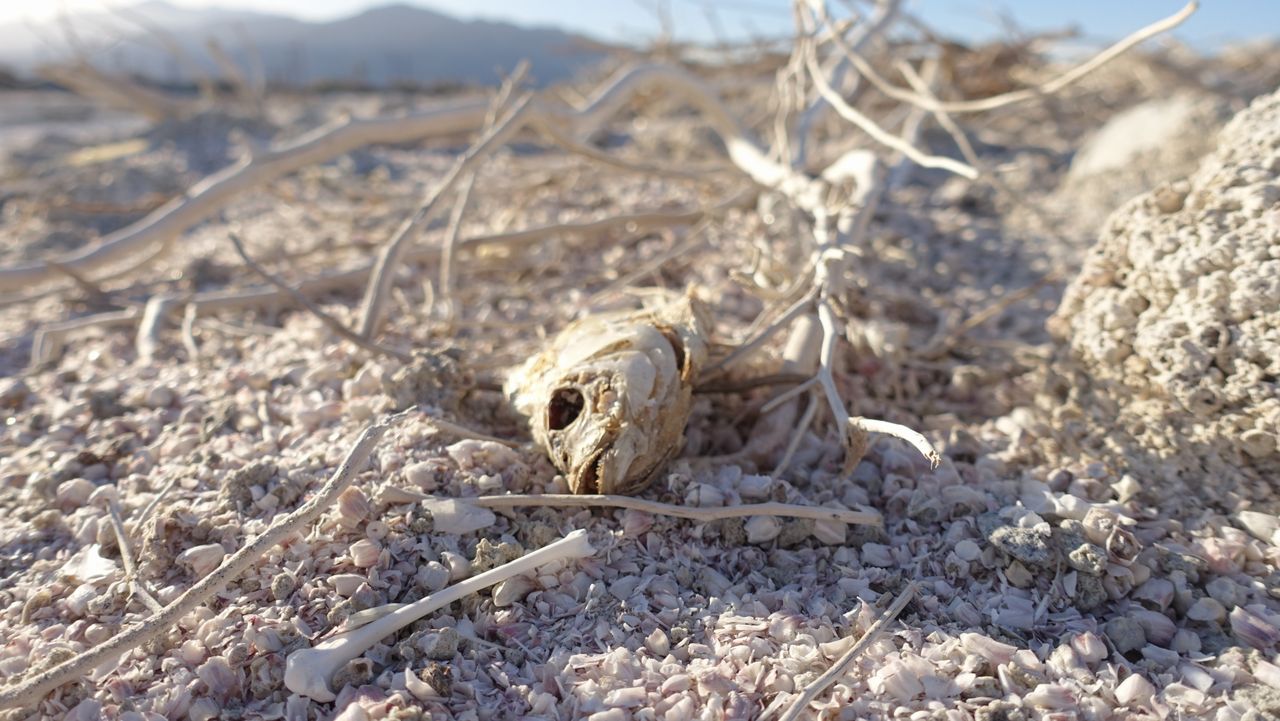 What happens when you don't bring water

But the longer I spend in this alien landscape, the more fascinating it becomes. ATVs rumble by, kicking dust up into the horizon and aramotor-propelled paragliders buzz around us.
I suddenly feel like I’ve stepped into some steampunked parallel universe. 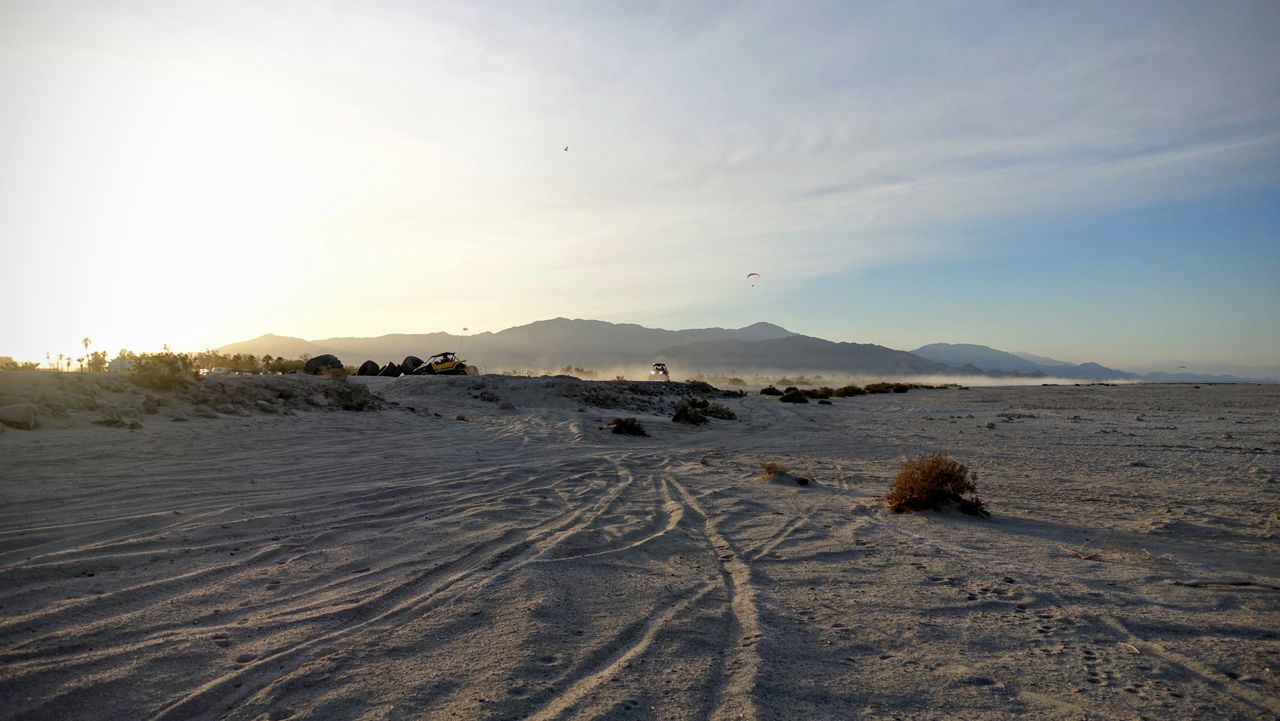 For those that like it dirty, there's always dune buggying it.

Now, all I need to complete the fantasy is to see a goggled pilot land with a cigar in his mouth and glass of scotch in hand. 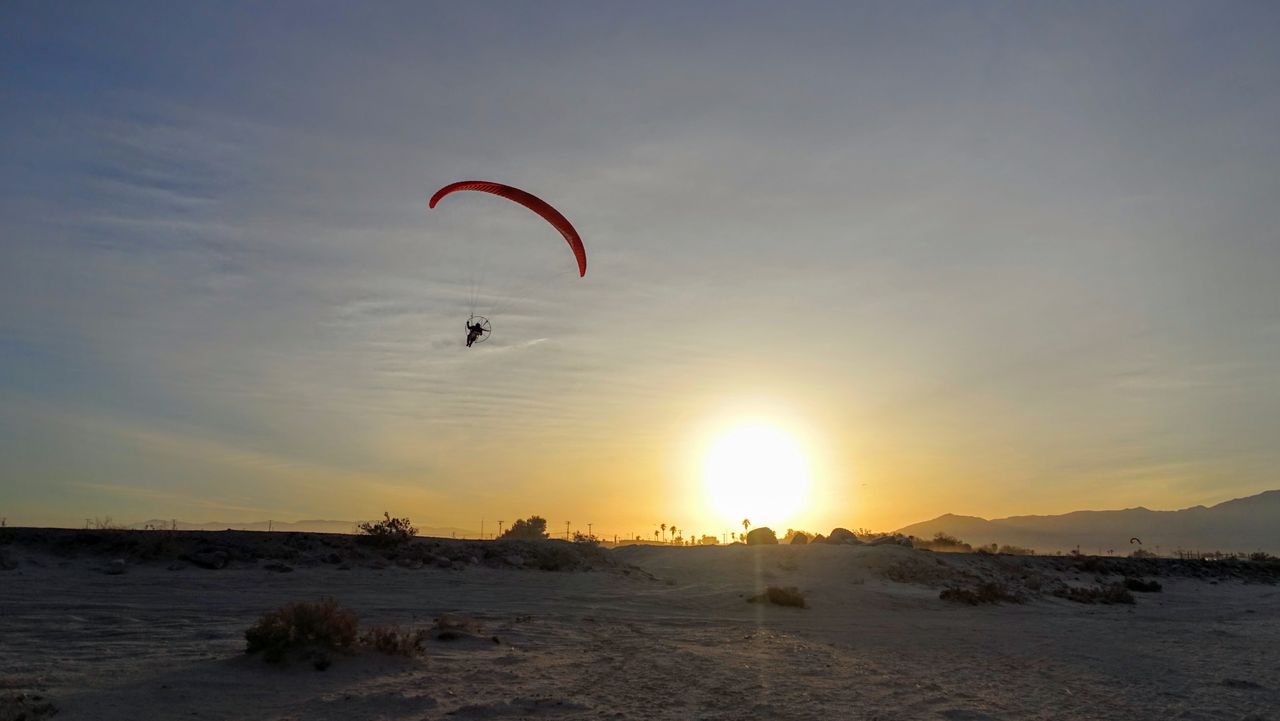 Paramotor (minus the scotch)

As the sun sets, the scene turns from macabre to magical. 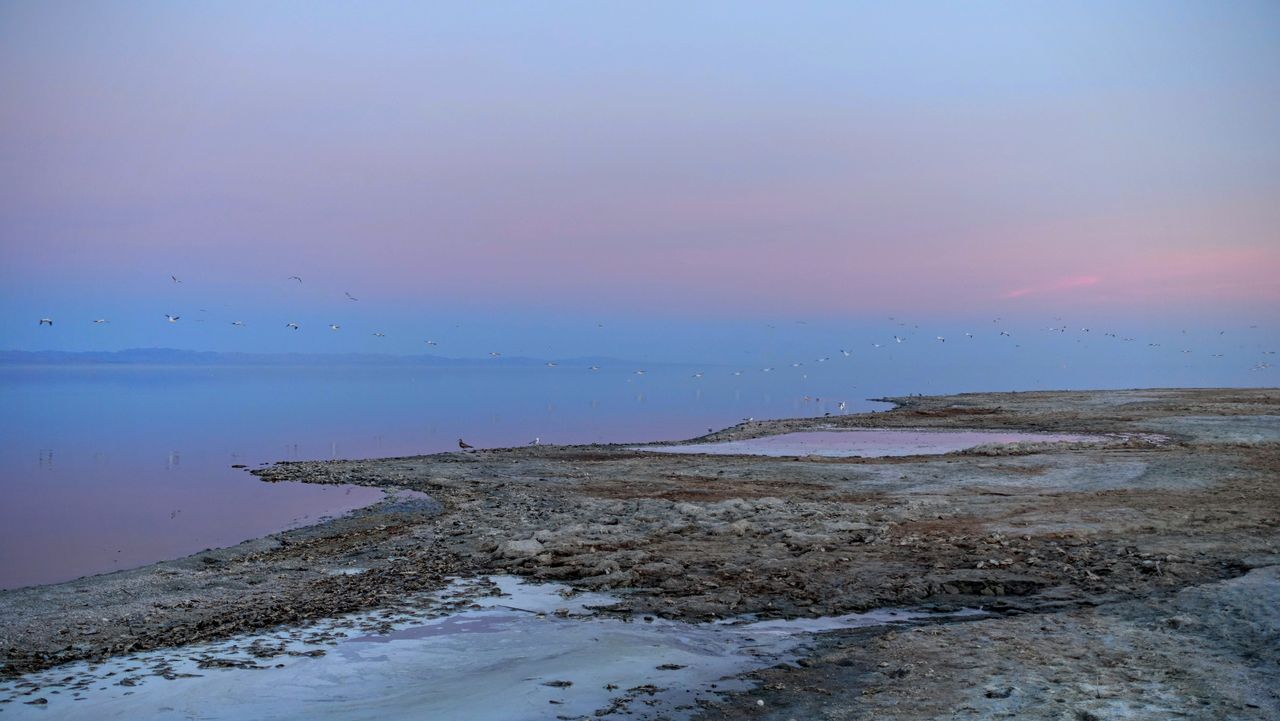 Shades of cotton candy pink permeate the sky and the sea transforms into a giant reflecting mirror. 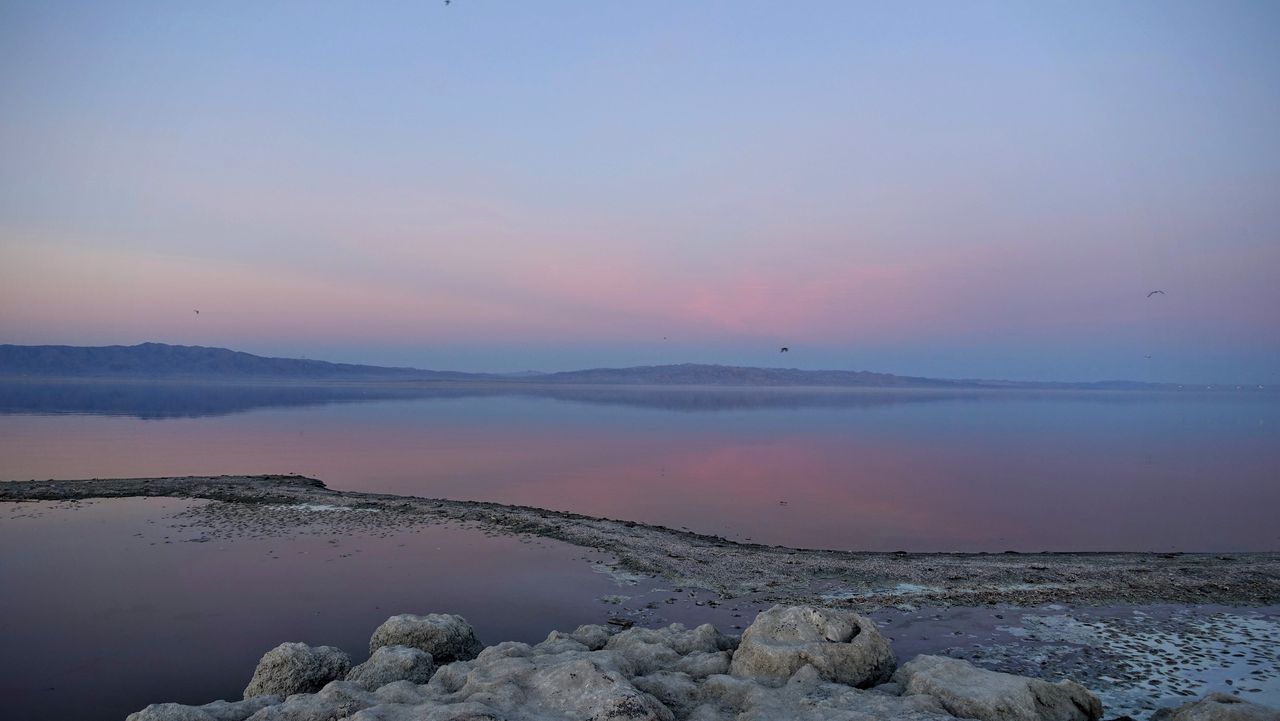 After the sun sets, we head to a Motel 6 in Brawley, the largest small town near Salton Sea, for a much needed shower. The motel is clean and fairly new. As much as I love horror movies, I was a bit relieved we opted for something more comfortable than one of the somewhat sketchy seaside motels. 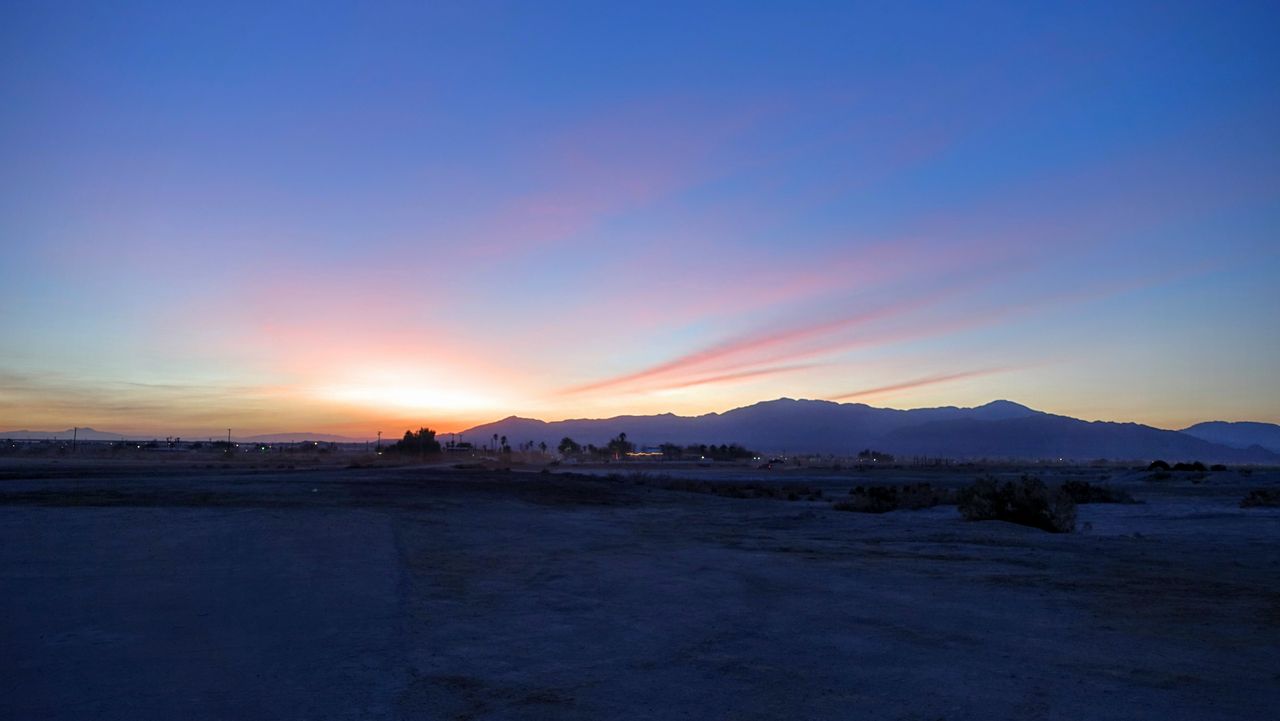 The last remnants of civilization

The sun is already blazing when we set out for the North Shore. My friend explains that the best time to visit the Salton Sea is winter, even by March temperatures can reach mid-90s. 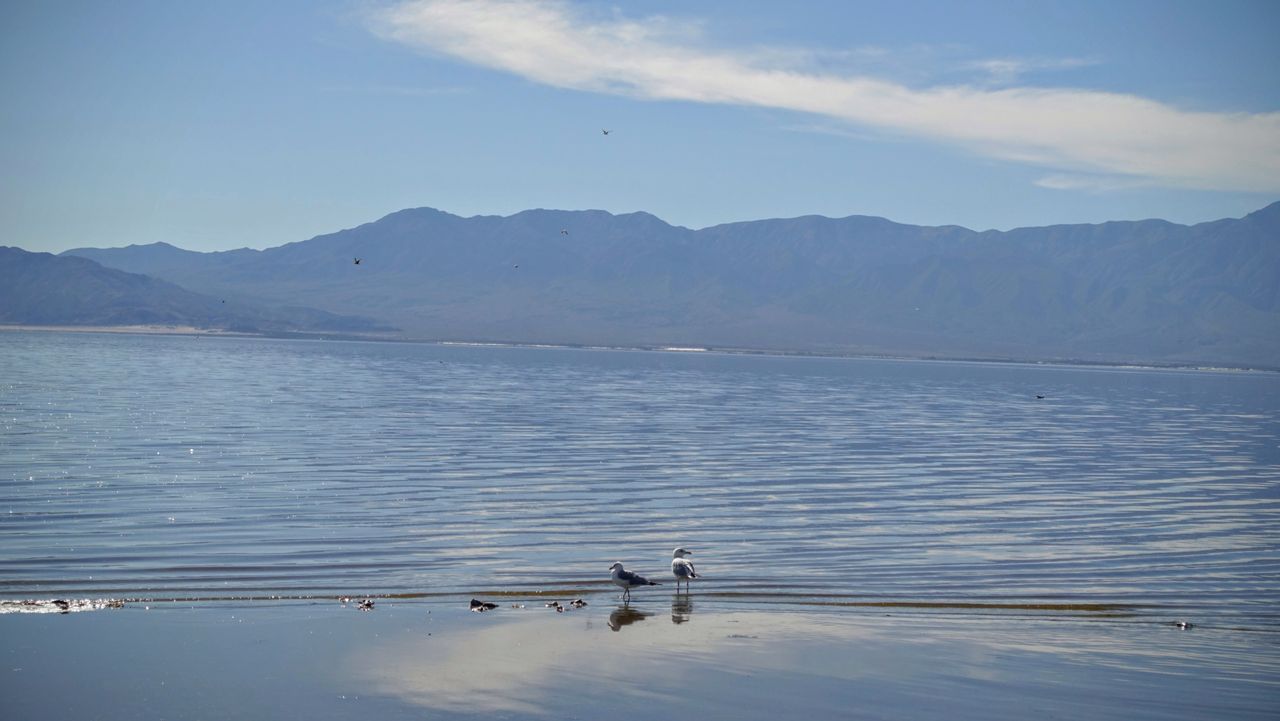 Anyone up for a swim?

My advice? Bring water, lots of it. And sunscreen. 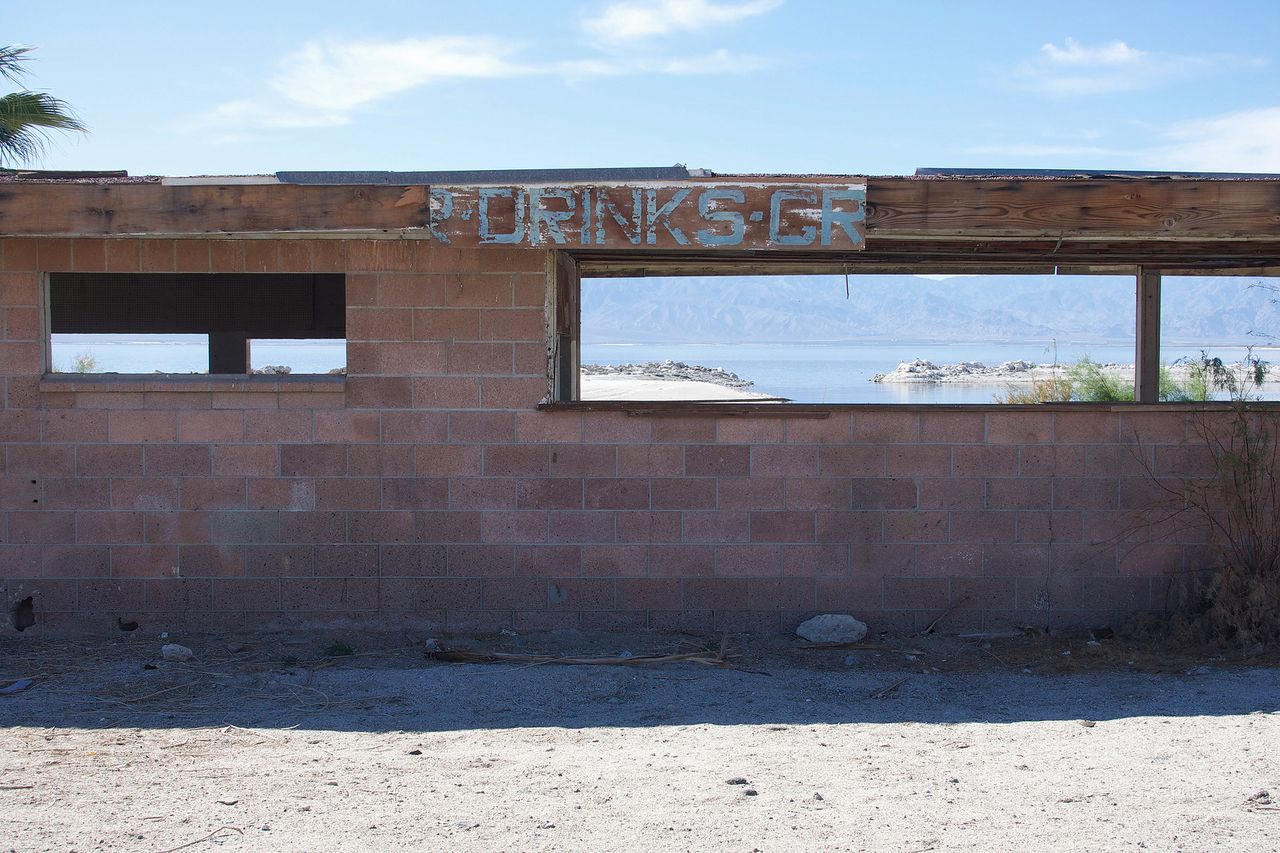 Used to be the snack bar at North Shore Yatch Club

Our first stop is the North Shore Beach & Yacht Club. Originally built in 1960, the place known as “The Glamour Capital of the Salton Sea” used to dock boats for people like The Beach Boys and Jerry Lewis. 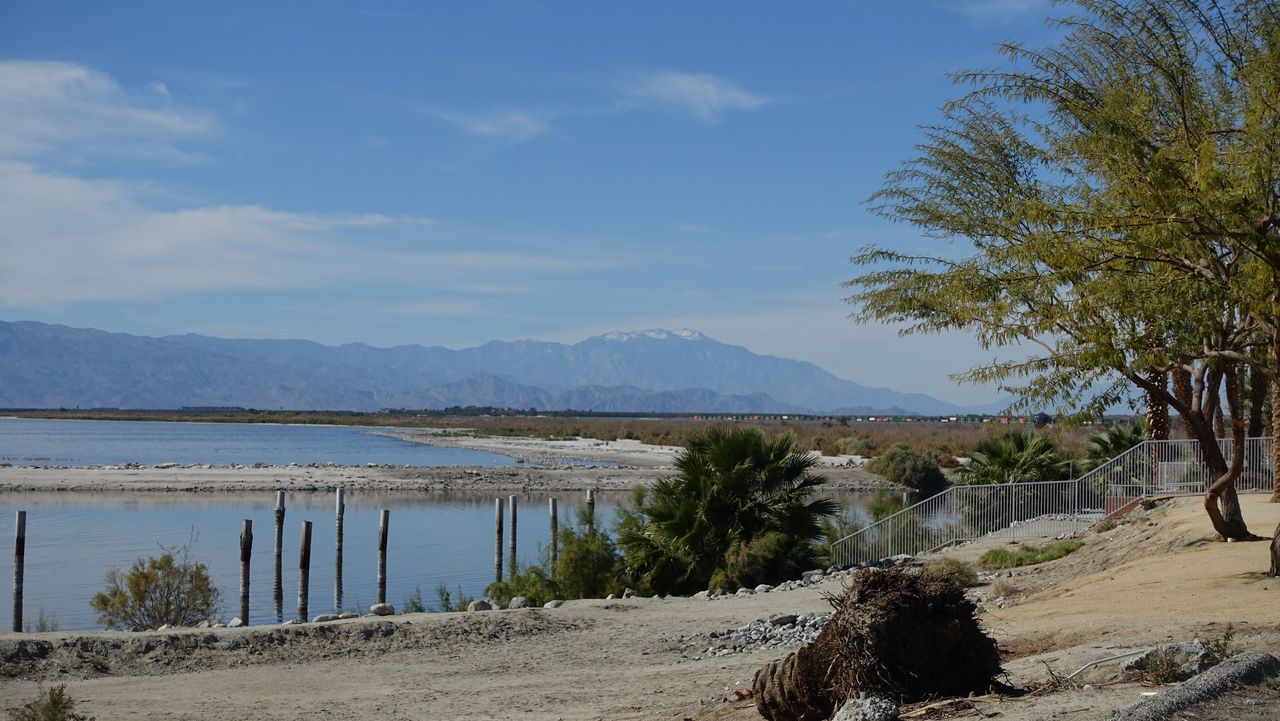 After being closed for two decades, the Salton Sea Yacht club was renovated in 2009 is now a community center and museum. 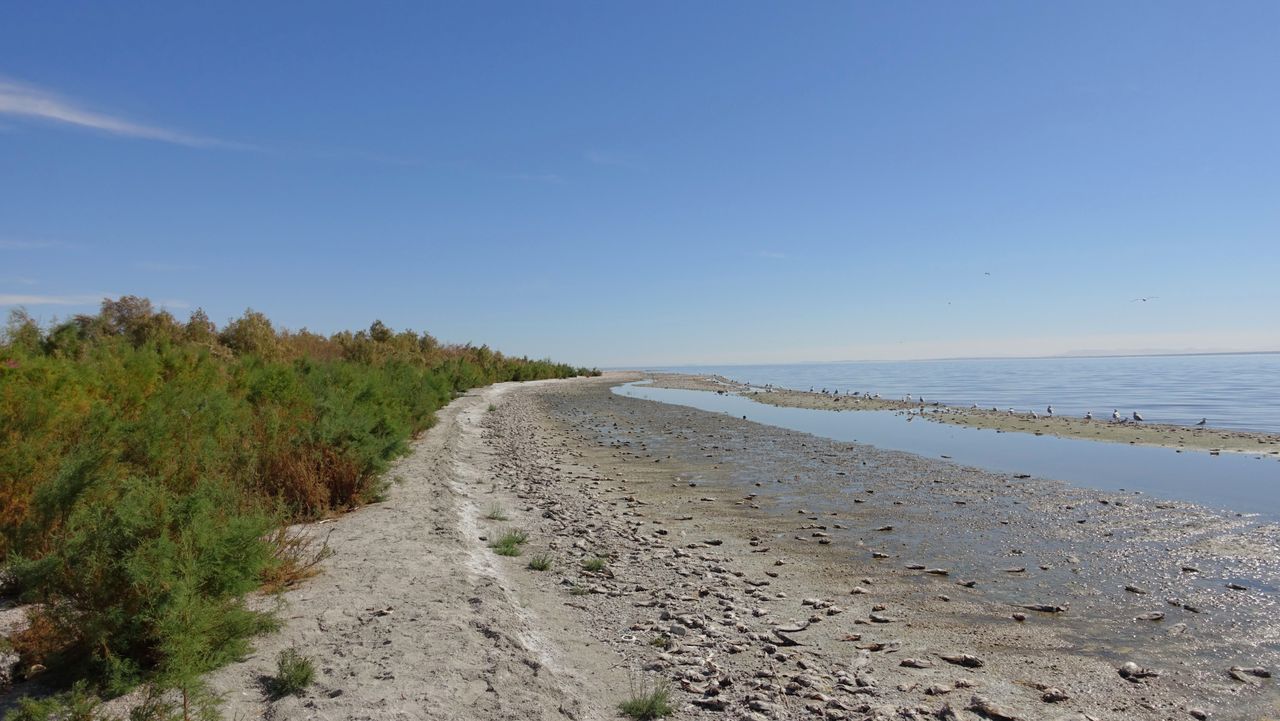 The North shore proved to be a bit different from the beaches surrounding Salton Sea City. It had more of a classic seaside beauty … minus the petrified ducks. 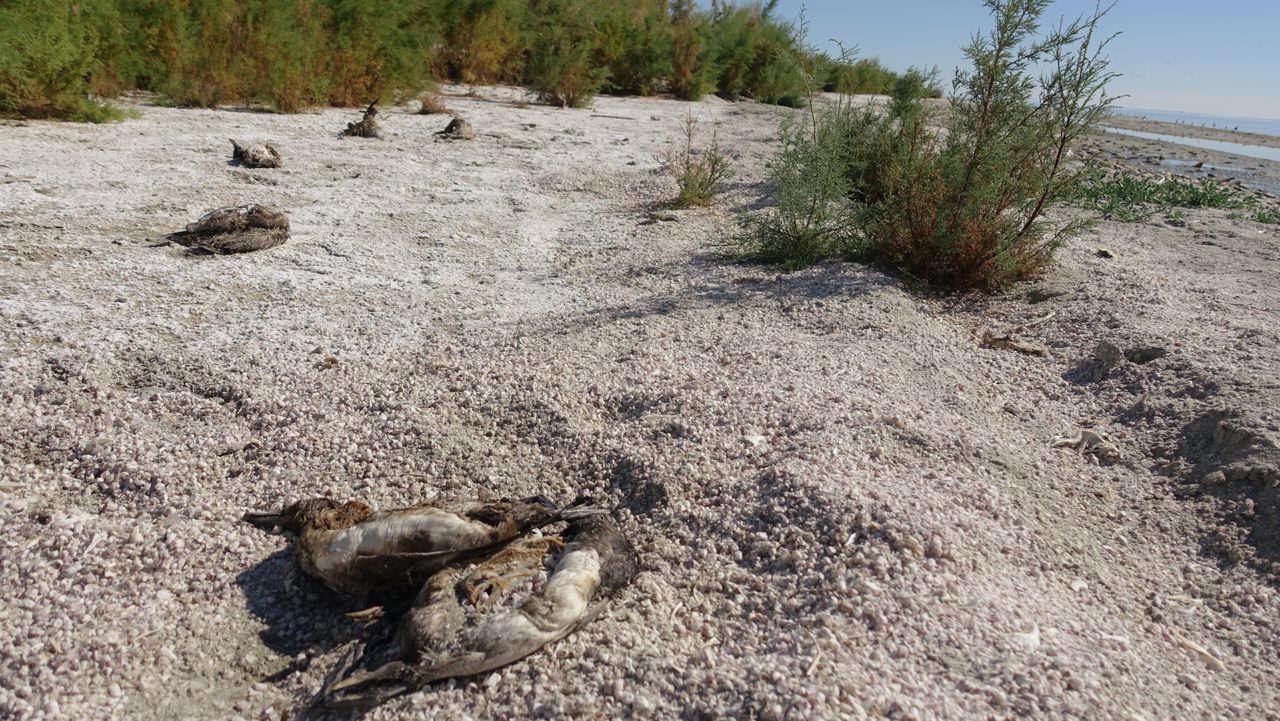 Get your rotting ducks-in-a-row

In stark contrast to the toxic, dying body of water, there was vibrant surrounding flora, like cattail sedges and tamarisk. After a few hours of wandering about snapping surrealist nature pics, we decided to take a break from the scorching sun for lunch and relocate. 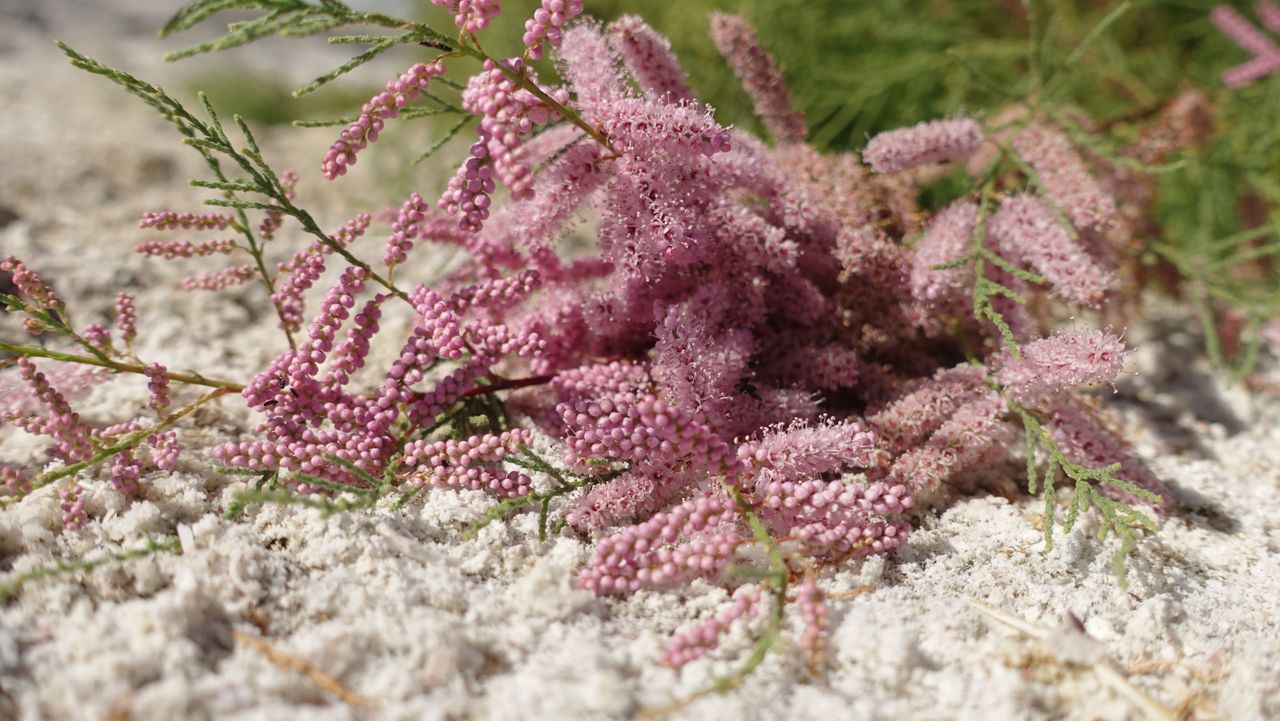 Pink pops of color, thanks to the tamarisk

Pro Tip: Pack a lunch, there aren’t many restaurants or convenience stores by the beaches.

Slowly making our way back towards LA, we decided to stop one more time at Salton Sea Beach to explore some of the abandoned mobile homes and use the bizarre scenery as backdrop for some epic shots. 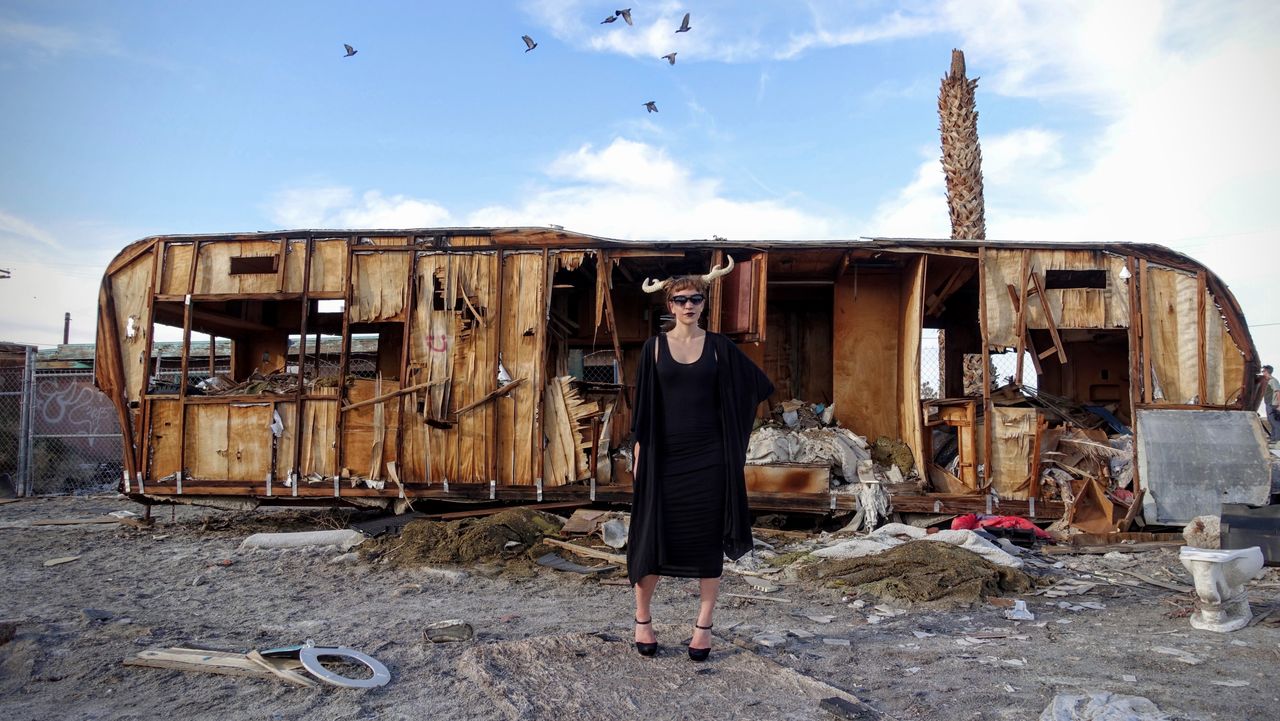 To my surprise, there was a young girl on a tricycle not far from the shore—a chilling reminder this is still home to a few determined inhabitants. 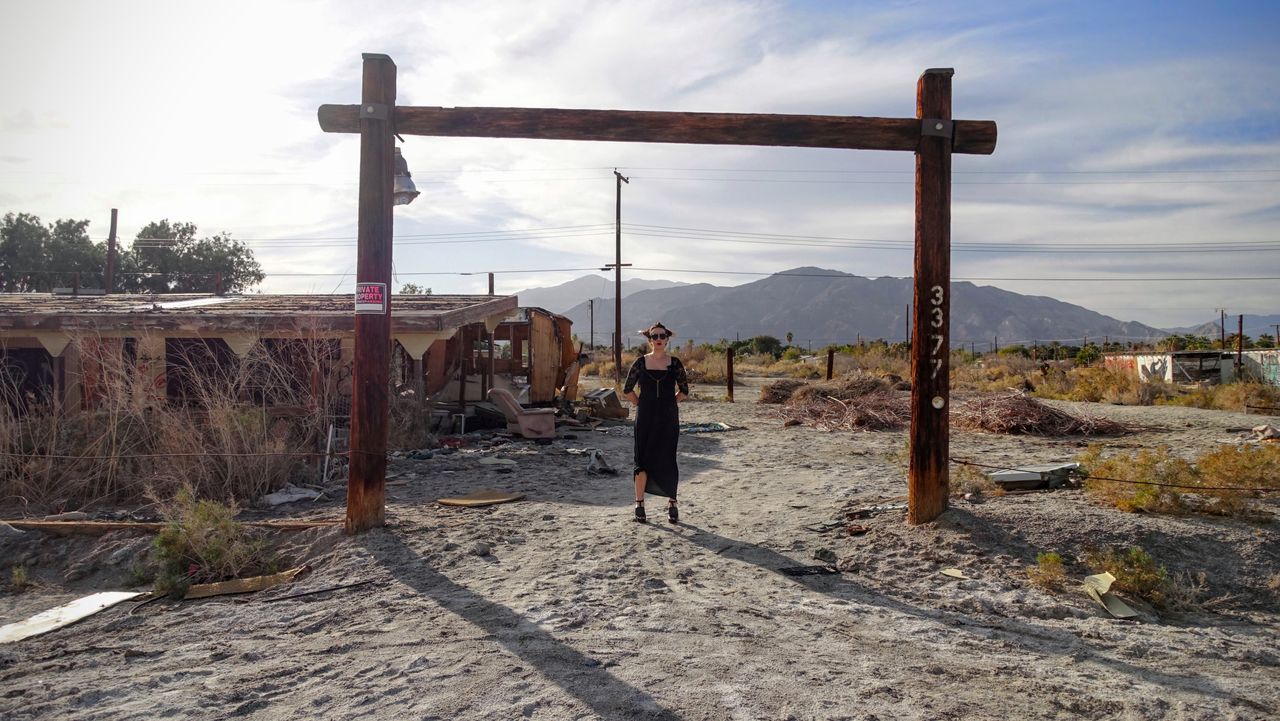 At the end of the second day, we packed up and headed back to the highway, stopping in the Coachella Valley for food. The sunset was still immaculate and we left excited about the prospect of visiting again. 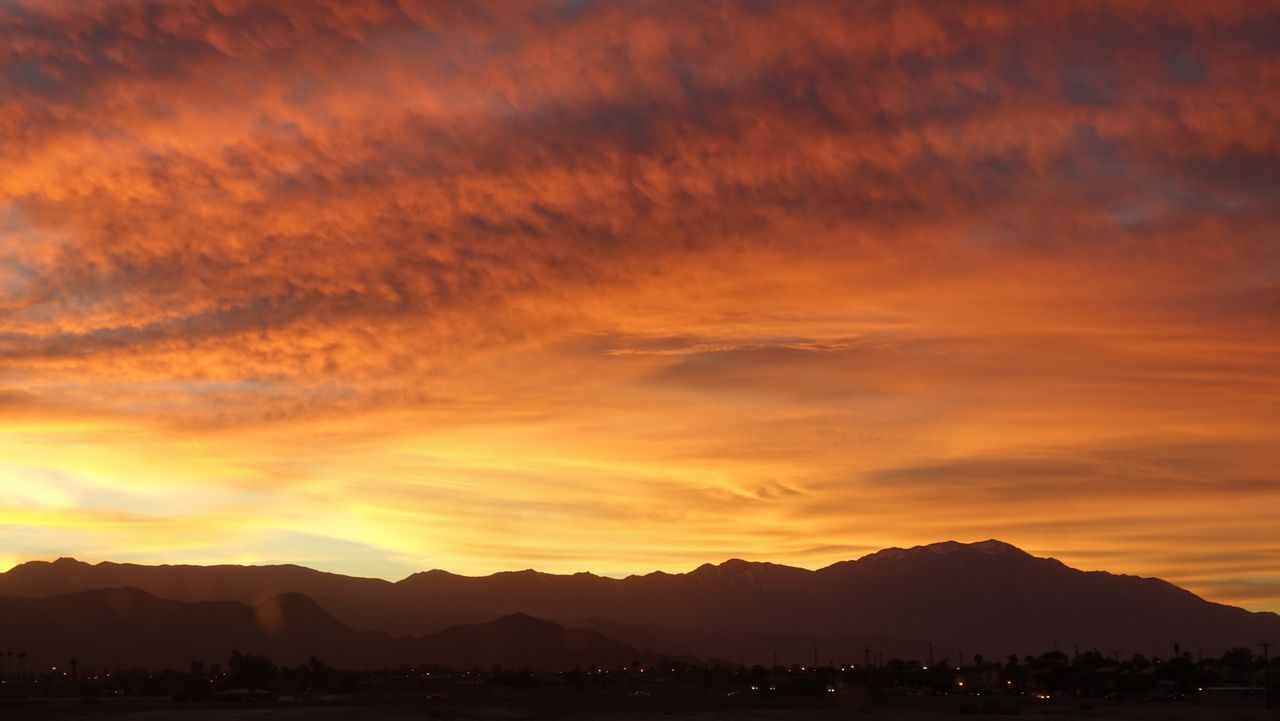 We decided our next trip would need to include the nearby Salvation Mountain or perhaps for one of the SEAthletes events, hosted by a fascinating group of people dedicated to boosting tourism and preserving the Salton Sea. 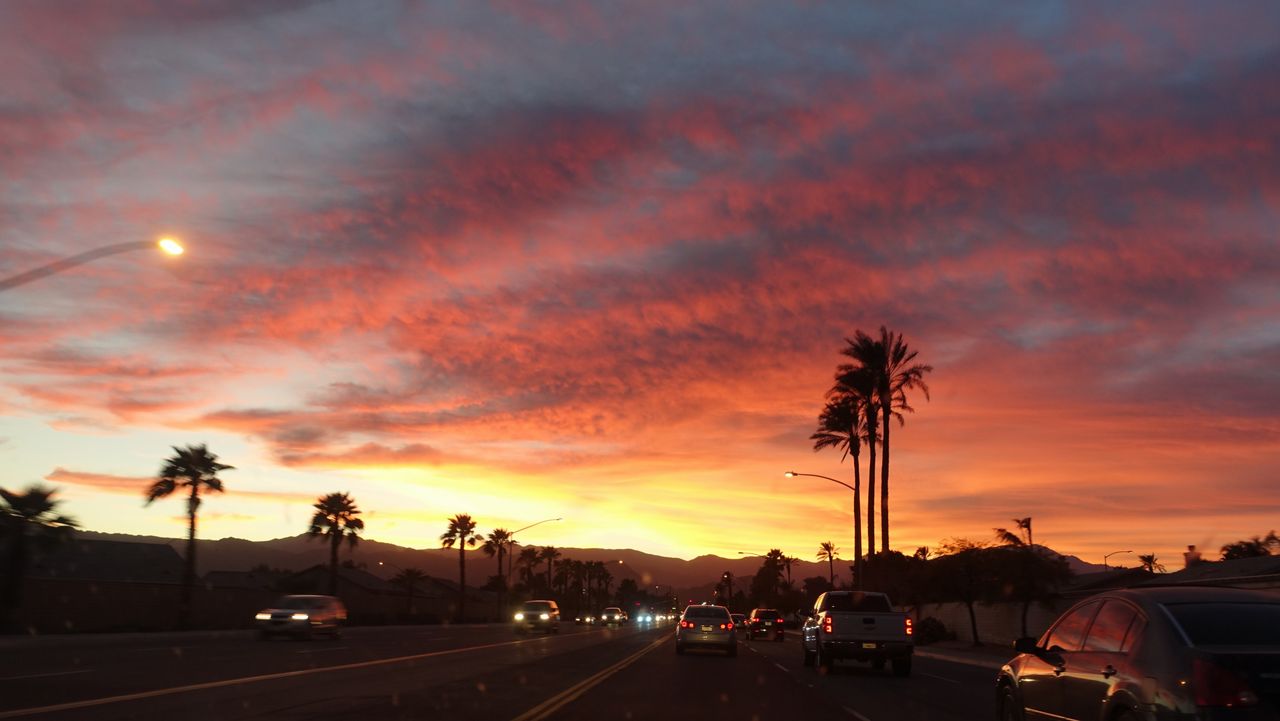 Verdict: Take a weekend and check it out. A day will do but two is always better!

Since it’s roughly 3 hours from LA to get there, check out these weird and wonderful sights nearby:

A former navy base turned artist-centric squatter community that was featured in the movie Into the Wild.

One of Slab City’s most famous art installations was an ongoing 30+ year labor of love by the late Leonard Knight, a passionate Christian who was inspired to build a public monument to love.

Camping and day use area, includes a boat ramp.

Another great destination to photograph the decayed remains.

Want to reenact a scene from the latest Star Wars movie or Lawrence of Arabia? Go here for epic sanddune backdrops.

Alethea Cho AKA Lady Lovesblood is one of the two horror exploring Ichor Sisters.  The sisters’ trip to the Salton Sea was the first of many spooky adventures into the unknown. Check out more of their wanderings on Instagram @horrorexplorers, Facebook or Twitter @ichorsisters.