​Unofficial entrepreneurial King of Melbourne Andrew Mackinnon guides us to Melbourne’s treasures, some of which are his own creation

Fifteen years ago, Andrew Mackinnon set out to develop Australia’s first social agency. Today, The Taboo Group has evolved into a full scale creative agency, with a damn fine array of brands that buy his services such as Nike, NAB, Mattel, Cadbury, Chupa Chups, Schweppes, Telstra, Haagen Dazs, and Fosters, just to drop a few. Andrew has a large appetite for creating things. In 2011, he stumbled upon some unsettled land under a bridge, surrounded by 360 degrees of water in the center of the city. This discovery would become the most iconic bar in Australia—Ponyfish Island, which led to the birth of the Melbourne City Brewing Company and the colourful brew, Unlikely Lager. The born go-getter has earned the role as Membership Chair and President Elect of the Entrepreneur’s Organisation Australia—Victoria Chapter. Andrew’s engaging vivacity has made him a compelling asset both inside and outside the boardroom, with “The Financial Review” listing him as a must-have on any event’s “Guest wish-list.”
Get Citizine Updates Here 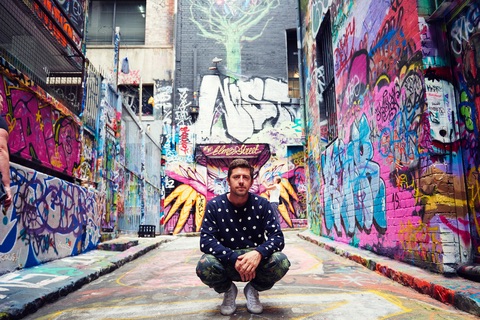 Why does Andrew love Melbourne? For it's entrepreneurial flair, of course! 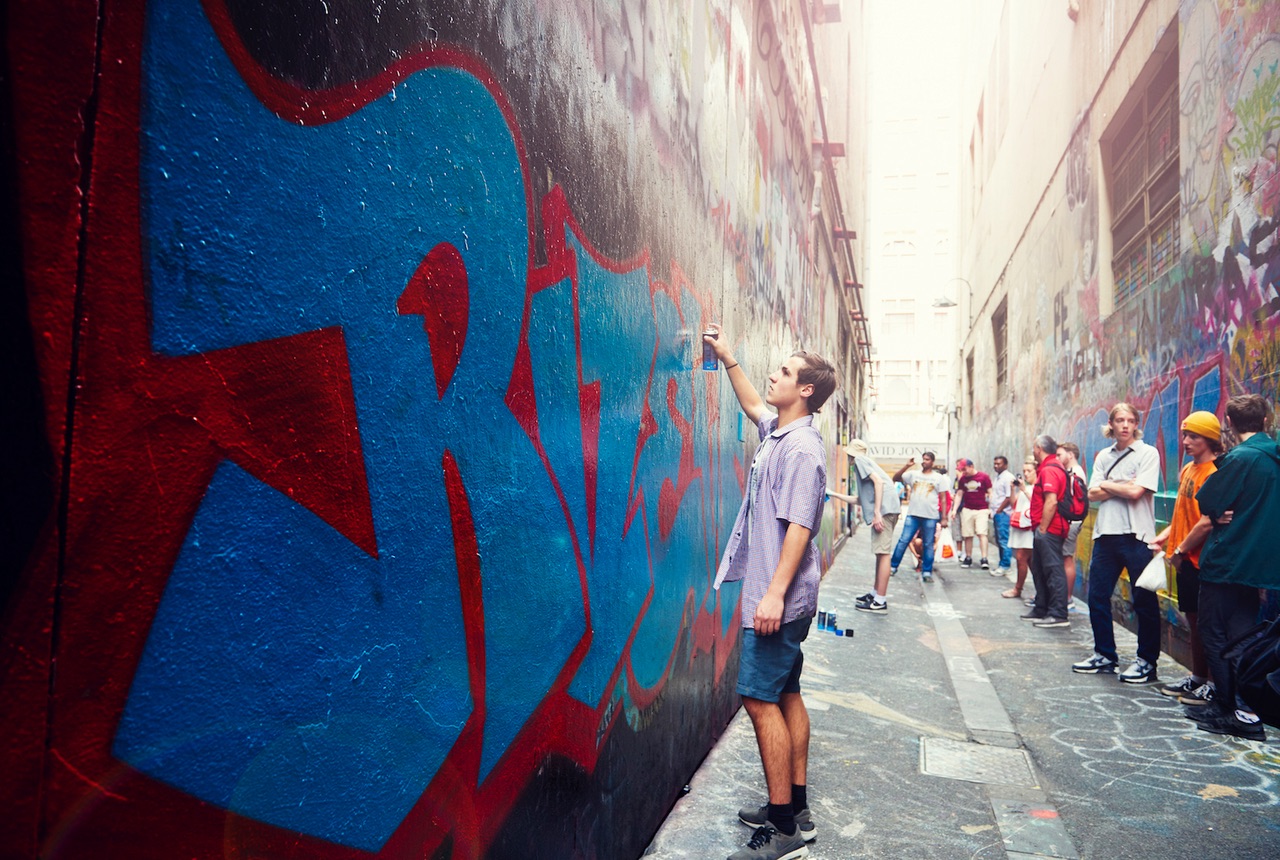 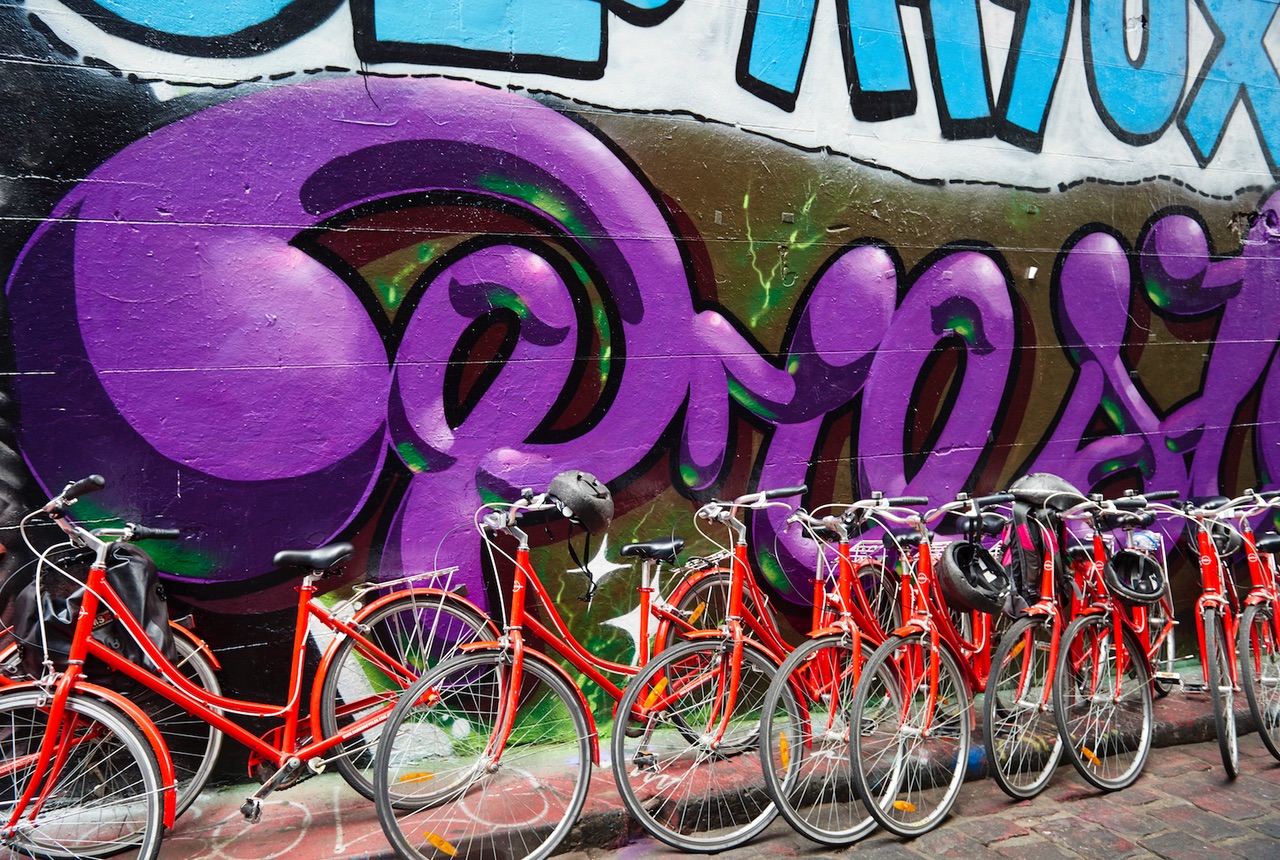 What are some of the reasons you love Melbourne?
Along with Berlin and Tokyo, I do think that Melbourne is one of the coolest cities in the world. The place is alive with interesting people: experts and creatives who come with entrepreneurial flair and passion about their craft who also happen to be wildly social and keen to enjoy a drink. We have a landscape of quirky laneways, adorned with brilliant coffee shops and marvelous eateries. We are heavily interested in the arts: theater, projections, poetry and sculpture. Our town is riddled with little nooks, and in those nooks is often a business of some kind. The center of the city has over 500 bars and restaurants, so finding something new and amazing is just a matter of getting really lost and finding a door. Our little city is based around the Yarra River, which divides the North siders from the South siders—two separate communities that love to claim their side is the greatest. People rarely cross the river, but surprises happen when they do.
Due to our colourful multicultural population, Melbournians are spoiled by the best food from all around the world. The standards are ferocious. There are dive bars and cheap eats and then there’s the fancy hot spots. Nothing sits in between. The game is competitive, which drives the players to make it better.
As the creator of a floating bar, you must know fun. Where should out-of-towners go for a good time?
If it was my night out, I’d start at the National Gallery of Victoria on St Kilda Road. The exhibitions are always impressive. Then I’d walk along Southbank and across the bridge and down onto the sacred land of Ponyfish Island. A beer on the bow of the ship at sunset is the best view in town. From there, I’d wander up Degraves Street, grab a coffee at Dukes Coffee Roasters and cruise up Flinders Lane. Down the side alleys are countless galleries of multicoloured art—ACDC Lane are my favorites. ACMI (Australian Centre for the Moving Image) always shows what the future of exhibitions will be like. The museum is pushing the boundaries of what a museum exhibition can be through their interactive displays and use of multimedia. I really love our Chinatown, that runs off Swanston Street. I always feel like I’m transported to another country, and it brings out the best of all of the Asian cultures. Dumplings at Supper Inn Chinese Restaurant is always a silly experience, but very good. 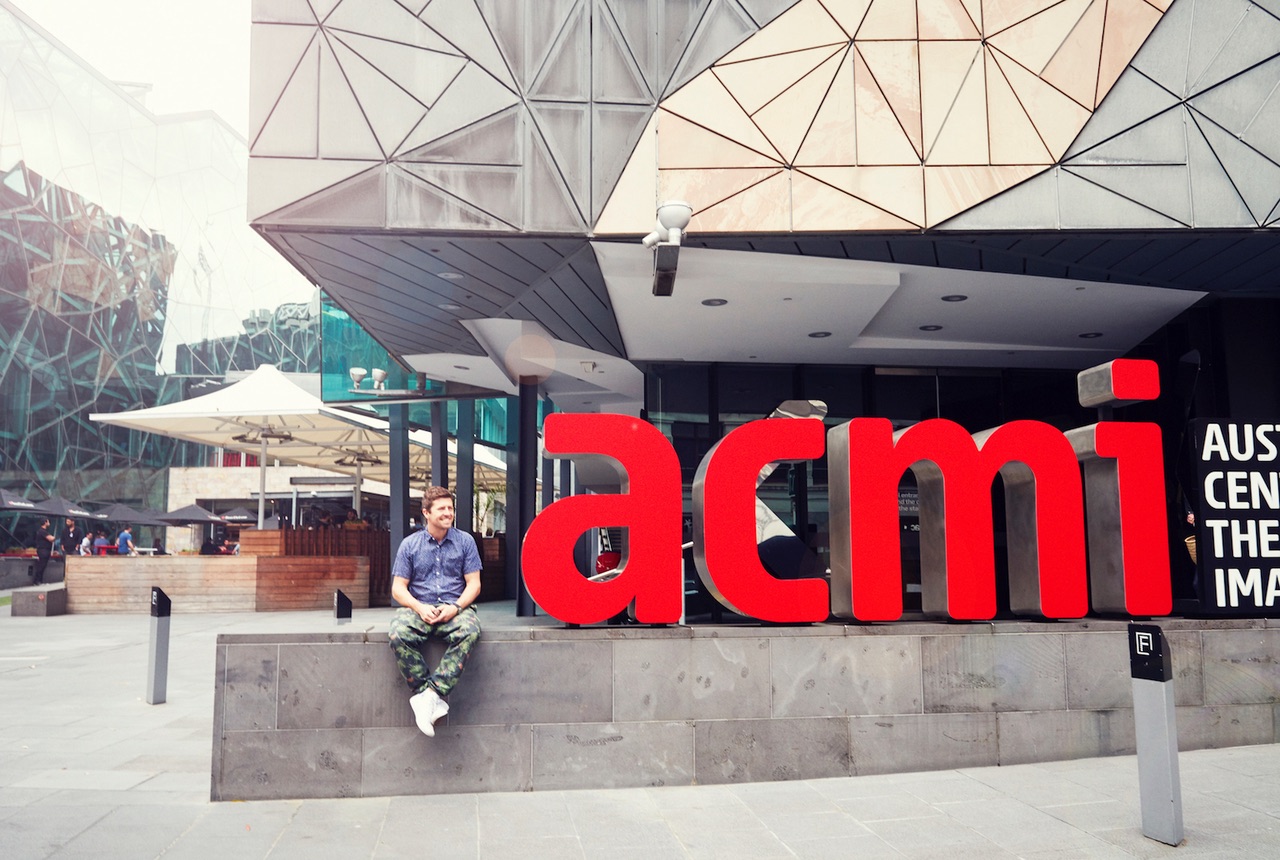 Visit ACMI for all of your digital culture desires.

How do you impress CC with a fun night out on the town?
An extravagant night on the town with CC would be to take her to a stage show, which she absolutely loves, followed by dinner. Recently we’ve seen “Mama Mia” at the Sydney Opera House and Les Miserables in Her Majesty's Theatre. Following our musical theatre entertainment with a meal at Coda, my favorite restaurant in Melbourne. To finish the night, cocktails at The Melbourne Supper Club and, onto the roof for sandwiches at Silo, overlooking the majestic Government House. 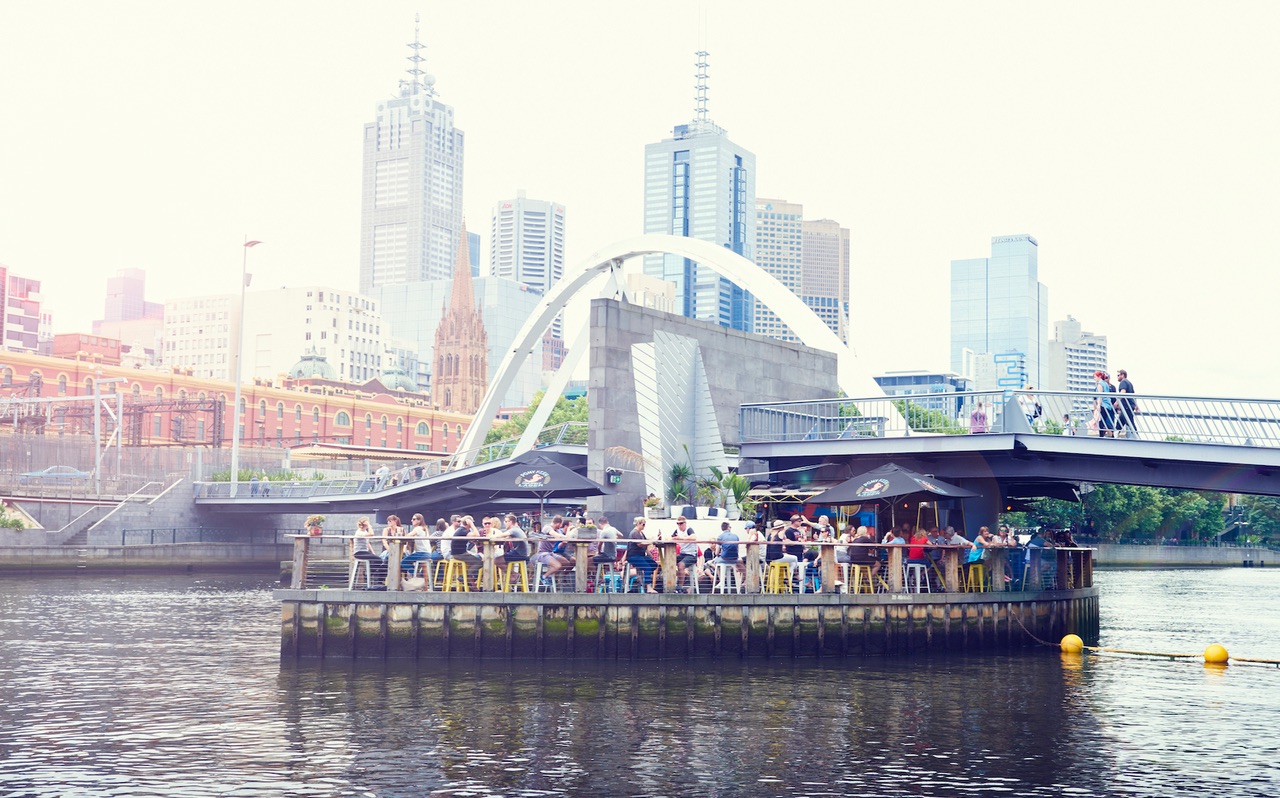 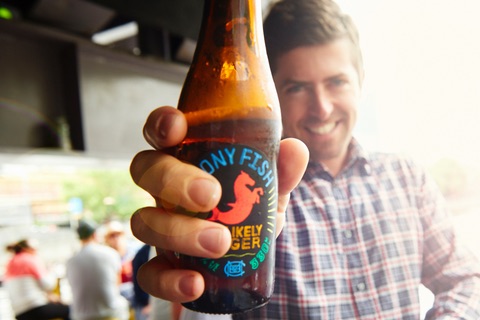 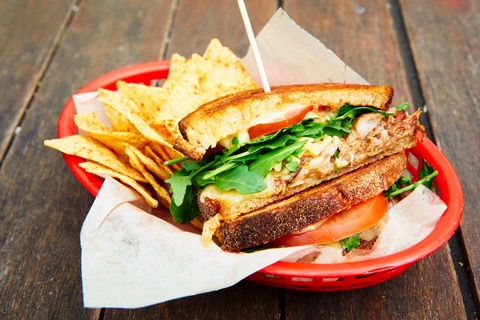 Tell us about the prettiest beach in town.
I have to be honest, our city beaches are good, but not the typical Australian postcard. We live a fifteen minute’s walk from St Kilda Beach, which has action, people, clean water and good sand. But there aren’t any waves as we’re sitting on a giant bay. An hour in the car will take you to our super beaches. Heading down the west coast to Torquay is one of the best surfing hubs of the world. Torquay is the home of Bells Beach, Rip Curl and Quiksilver—an impressive surfing culture. But my favorite beach is an hour further down the Great Ocean Rd at Cumberland River. The beach is protected by two points and has a huge river that runs into the water. If you follow the river upstream you’ll enjoy a beautiful walk and a powerful waterfall, perfect for swimming in naked (if you’re an exhibitionist).
Which personality types gravitate towards which neighborhoods of Melbourne?
Melbourne people love a book, drinking coffee, cooking and a drink. The people are creative doers. Humility is admired and entrepreneurs are celebrated and rewarded. Generally a pretty nice bunch of people. 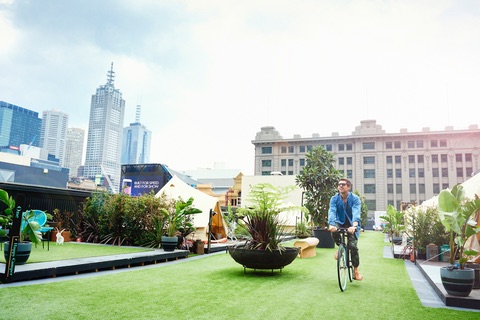 The grass is defnitely greener on Ponyfish Island. 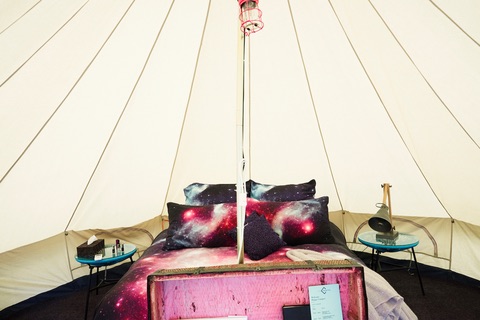 Take a catnap in a Bell tent at St. Jerome's The Hotel.

Get Citizine Updates Here
Which hotel would be the perfect place for a staycation?
The most radical escape in the centre of Melbourne’s city is created by my Ponyfish Island business partner, Jerome Borazio. He once had a bar called St Jerome. It was an institution and established Melbourne’s laneway culture. It cost him 5,000 Australian dollars to set up and he never had a spare milk crate to sit on. The legacy has now been translated into a hotel experience—St. Jerome's Hotel. It’s perched on a rooftop lined with Bell tents—magnificent! Each tent is fitted with a trunk of goodies, iPad’s, drinks, snacks and a handy heater for the colder nights. It’s one in a million and not to be missed. Check it out, camping safari, right in the middle of Melbourne.
Eat, Drink, Be merry
1. Coda
2. Melbourne Supper Club
3. Woo Ga
4. Borsch Vodka & Tears
5. Entrecôte
Try This
1. Ponyfish Island
2. ACMI
3. Abbotsford Convent
4. Melbourne Cricket Ground (MCG)
5. Royal Botanic Gardens
Stay and Play
1. St. Jerome's The Hotel
2. Art Series Hotels
3. St Kilda Beach
4. ACDC Lane
5. Gertrude Street 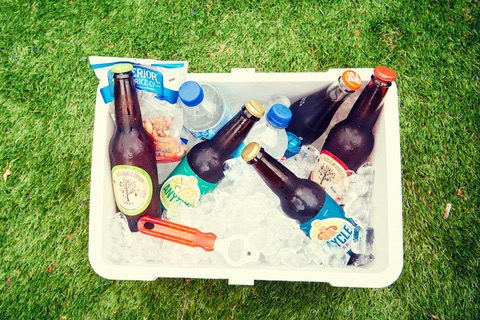 Andrew Mackinnon is a founder of the creative agency Taboo and the most iconic bar in Australia, Ponyfish Island. Move and shake with Andrew @andymack1980