There's more to the Magic City than beaches, babes and Pitbull—so strut your stuff through Coconut Grove, the Design District and everywhere else that matters in Miami

Whether it’s because of the beach, the city’s party-all-night mantra, that Will Smith song, or the fact that reruns of MTV’s “Room Raiders” make most people think Miamians only run errands in bikinis—all over the world, eager travelers are just aching to get to the Magic City.

What most people don’t realize, however, is besides the beach and some unbelievably epic parties, Miami is actually a web of more than 20 neighborhoods, each completely different from the next. So to help you sort through the madness, here is one Miami native’s guide to its most walkable areas:
Get Citizine Updates Here

As the city’s core metropolis and financial district, Brickell and Downtown is where the magic happens. It’s a mecca of high-rises and well-dressed men who have nailed the art of the “hair flip.” Expect a flurry of executive lunches and lawyers who can speed walk in stilettos without tripping. Most of the people who live on Brickell Avenue also work there—so when the workday is over, you’ll find these work-hard-play-hard hotties chatting up a secretary at Mary Brickell Village, the neighborhood’s (and Miami’s) hottest bar area.
Go here if ... you like wearing ties to work, high-rises, millennials, happy hours, identifying as a yuppie, rush-hour traffic, Tinder, lawyers and finding every reason in the world to eat Casola's Pizza at 3 a.m. 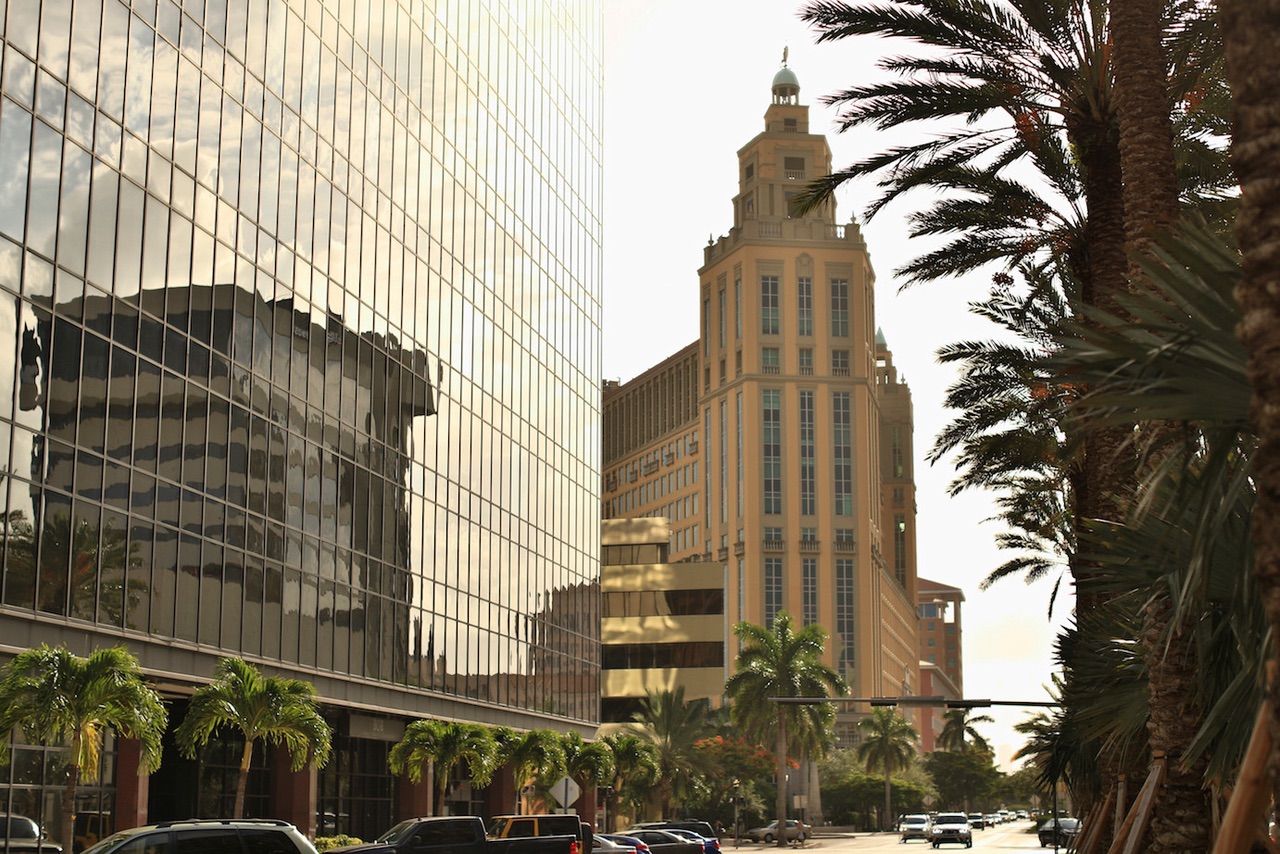 Brickell is the city’s core metropolis and financial district.

Formed by a music-playing, art-loving band of hippies, “The Grove” (as the locals call it) is Miami’s oldest inhabited neighborhood. Carrying through the vibes of its past, today, it is equal parts artsy, laid-back, casual and ultra-trendy. Named after the lush Florida trees that give this popular hangout the look of a chic jungle, Coconut Grove is most known for its boutique shops at CocoWalk, the annual Coconut Grove Arts Festival, weird parades that celebrate mangos and watering holes for University of Miami students to do what college students do best—drink.
Go here if ... you like brunch, movie theaters that serve alcohol, drinking at marinas, annual arts festivals, bed races, hot University of Miami frat bros, deep conversation with popular hobos and watching drunk University of Miami sorority girls obsess over aforementioned frat bros. 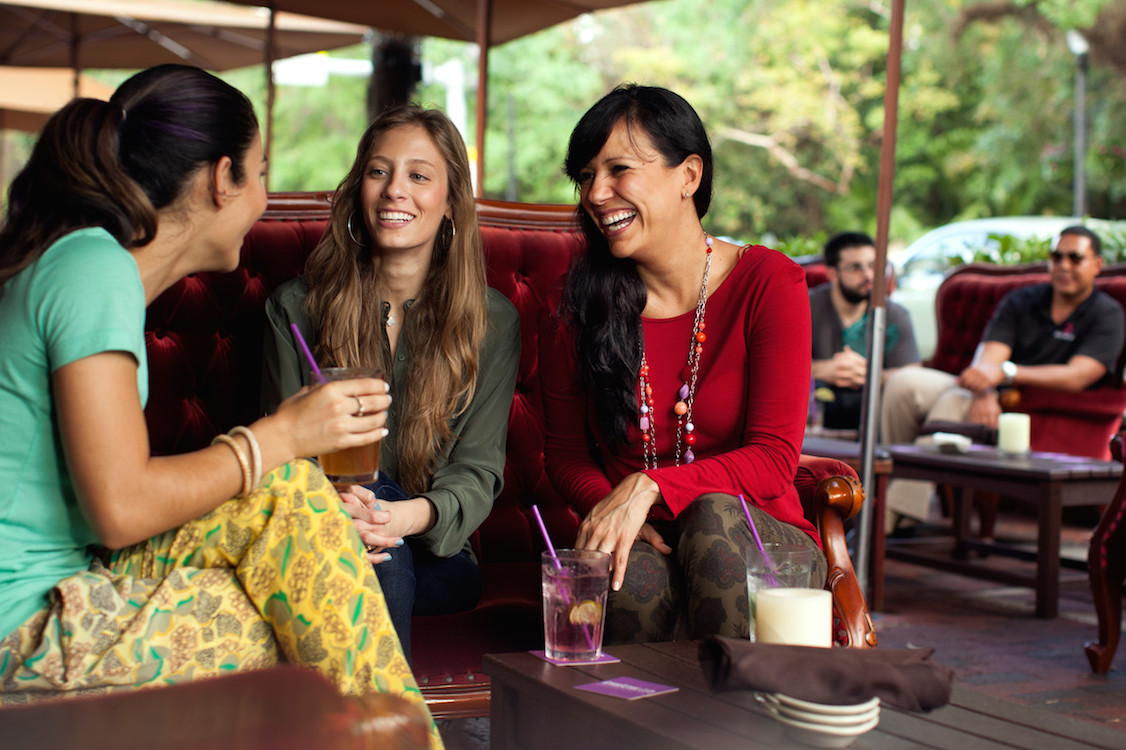 Coconut Grove is the most inhabited neighborhood in Miami. Images courtesy of Greater Miami CVB 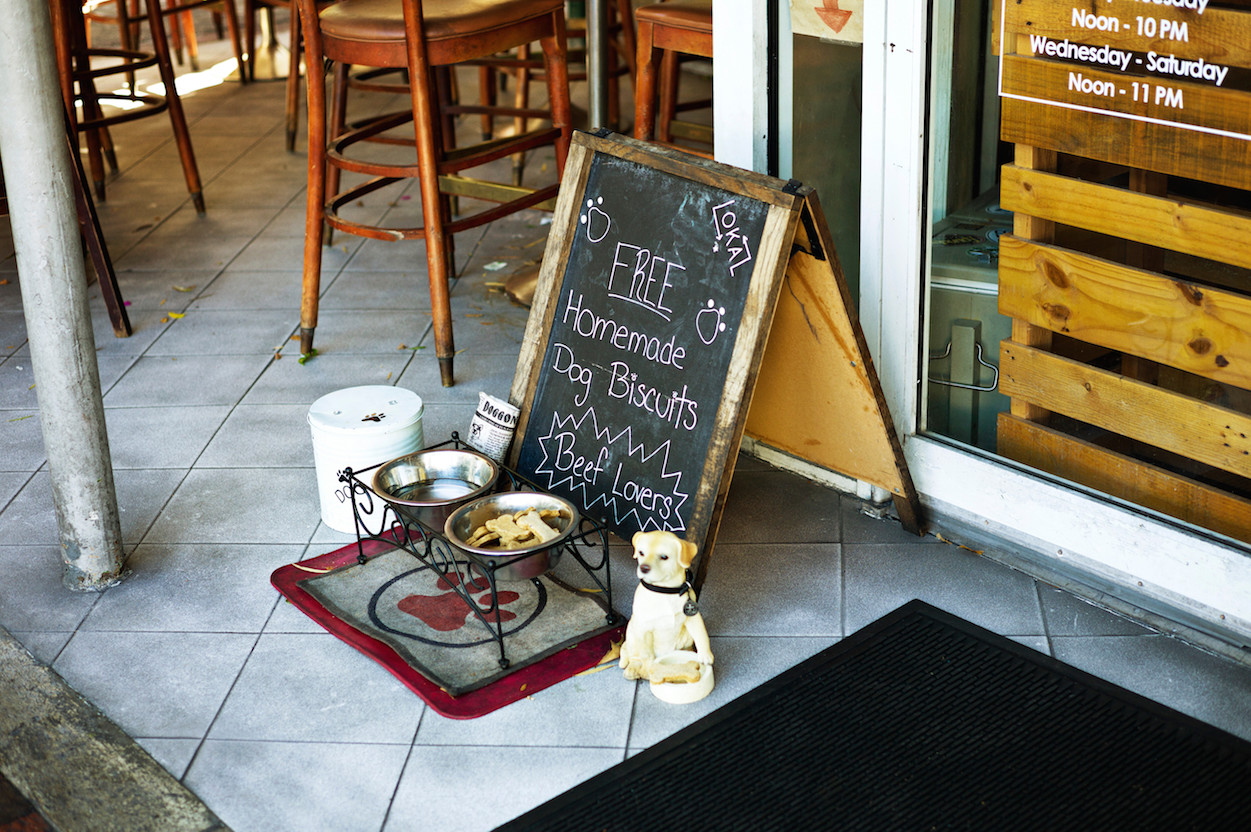 All are welcome in Coconut Grove, including puppies.

Coconut Grove’s more posh historic neighbor, Coral Gables, is known for its vintage architecture, landscaped mansions, trendy families, The Biltmore Hotel, and at the core of its charm, Miracle Mile. With the street’s adorable restaurants, family feel and good bar-hopping scene, it’s a taste of Brickell or South Beach for those who live farther south—minus the annoying drive, tourists and people who can’t handle their alcohol.
Go here if ... you like charming neighborhoods, shopping for wedding dresses, farmers markets, high-end malls, neighborhood theaters and nice dinners that don’t involve driving to Miami Beach. 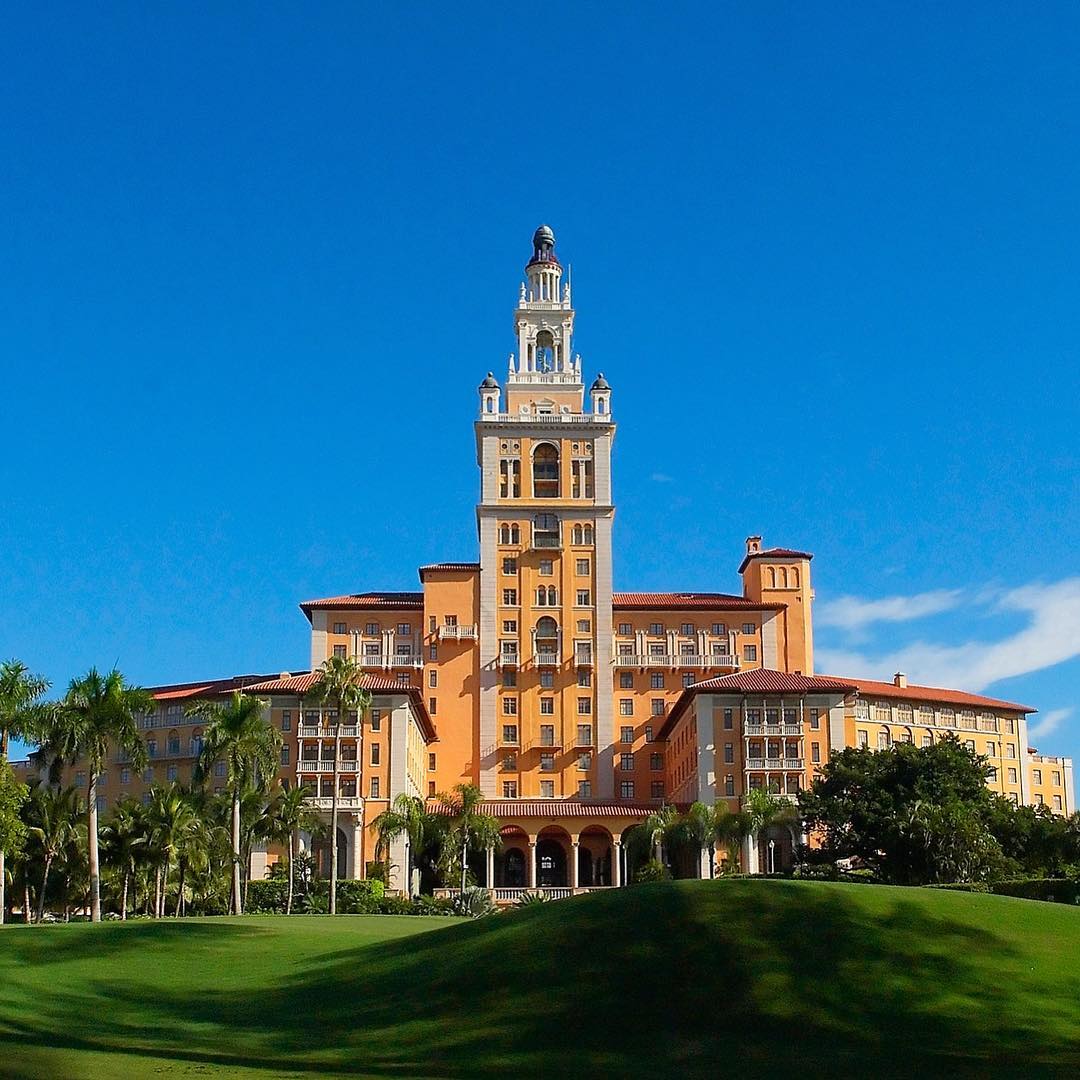 If Miami had Burning Man, this is where it would happen. Recently a less-than-desirable neighborhood, now it’s a happier place where artists, chefs, thinkers, startups and millennials who haven't yet found their niche in Miami go to thrive. At its core, Wynwood is all about experimentation. Come for the eccentricity, people-watching and shady street corners. Leave in a happy food coma after eating charred octopus or quinoa tacos and popsicle-based margaritas from Coyo Taco. (And don’t forget to bring me some guac.)
Go here if ... you like graffiti, gentrification projects, all types of people, good food, Star Wars-themed bars, supporting legalized marijuana, the best tacos in Miami and 20-something artists who dropped out of high school but will probably still make more money than your grandparents. 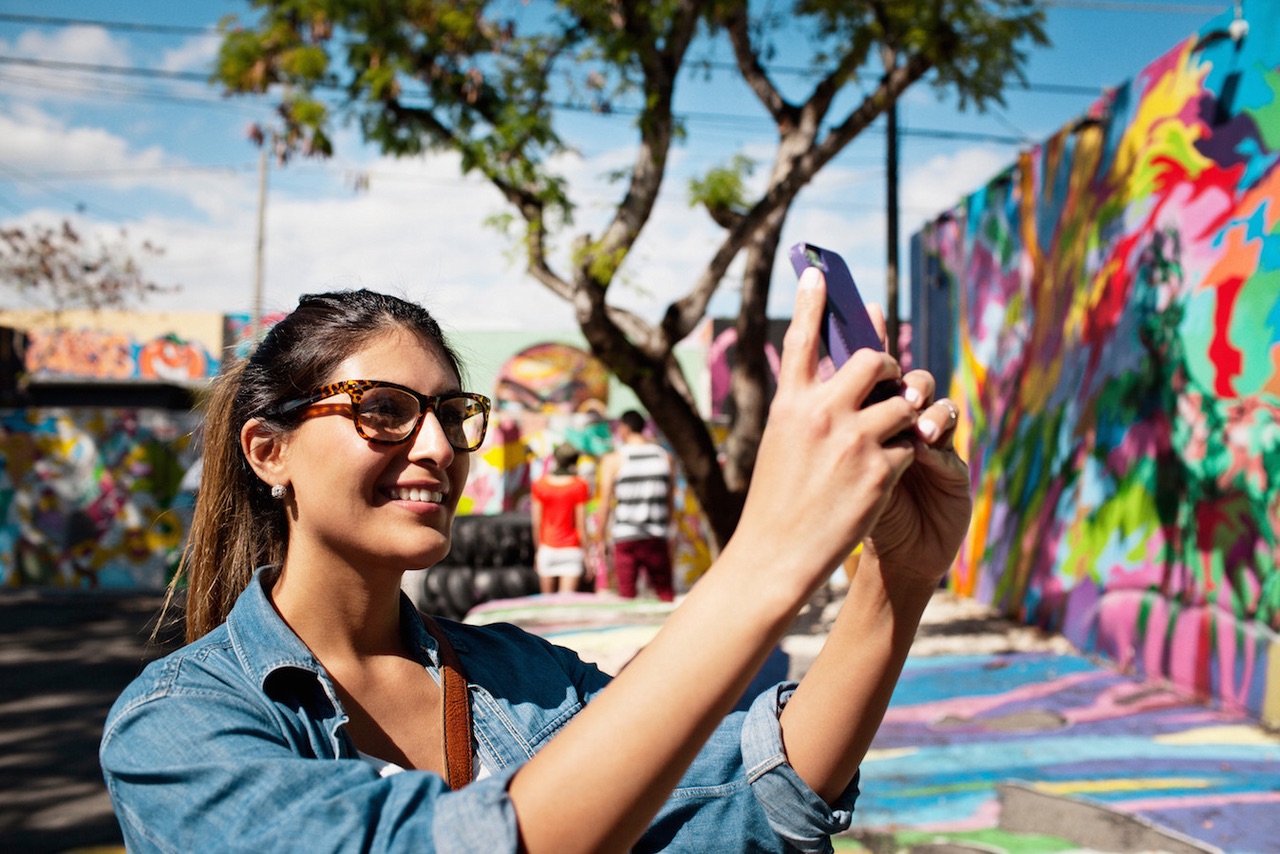 Wynwood is a hub for artists and has become Miami's experimental core. Head to the Wynwood Walls to see street art from international artists.

A literal diamond in the rough, the Design District is what happens when God finds a dangerous neighborhood, throws billions of dollars on it and prays. It is 15 blocks of gentrified real estate turned into the real life storefronts of every woman’s dream closet: Think Tom Ford, Bvlgari, Tiffany & Co.., Vhernier, Louis Vuitton, Christian Louboutin, Dior, Longchamp and more.
Go here if ... you like Prada, casual million-dollar shopping sprees, moms who don’t work, pop-up restaurants, galas and iconic art sculptures shaped like soccer balls. 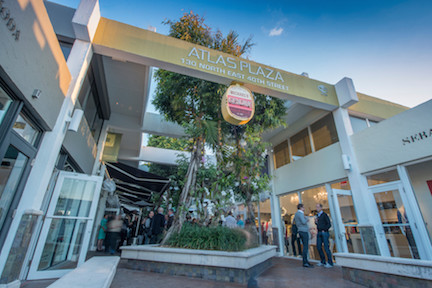 Lovers of high fashion with full wallets will be at home in Miami's Design District. Images courtesy of Greater Miami CVB 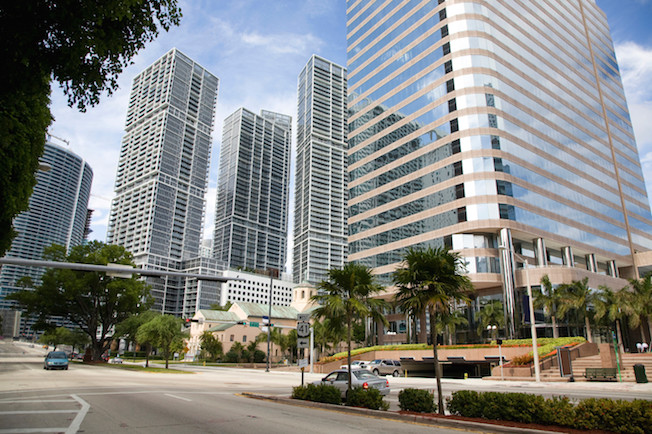 Expect to see high-rises and men in suits along Brickell Avenue in Downtown Miami.

Just past downtown and right on the border of Wynwood and the Design District, this edgy- meets-fashionable neighborhood centers on the The Shops of Midtown Miami at its epicenter: a grid system of high-rise condos, shopping and popular watering holes such as MC Kitchen, Bocce, Sugarcane and Brasserie Azur. Embracing a bit of all of its neighbors, Midtown is a slightly more polished Wynwood, without the corporate feel of Miami’s financial district. So in other words, it’s that free-spirited girlfriend who still makes money and has goals.
Go here if ... you like both Wynwood and the Design District and can’t decide which one to go to. 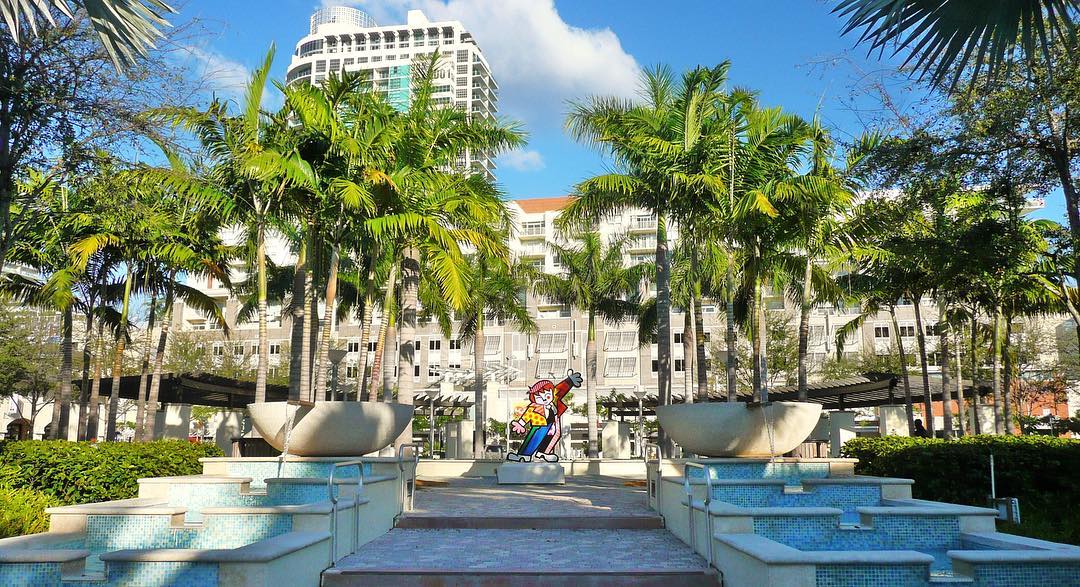 The Shops of Midtown Miami, image courtesy of @eveatthedistrict

Finally, what more is there to say about South Beach? With its iconic Ocean Drive, beach, classic art deco motif, famous hotels, such as the Fontainebleau, scantily-clad dancers at The Clevelander and Wet Willie's (thanks, Ludacris), party-goers across the globe know that anything can happen in South Beach. When it gets too overwhelming, head south of 5th street to the appropriately named “South of Fifth” neighborhood—it’s decidedly quieter and more upscale, has billion-dollar celebrity penthouses and is the home of the famous Joe's Stone Crab.
Go here if ... you like tans, beach volleyball, Coronaritas, people-watching, Botox, Nikki Beach Miami parties, tourists, bachelorette parties, trying to get into LIV, European waitresses and neighborhoods with names that #basicbitches can abbreviate. 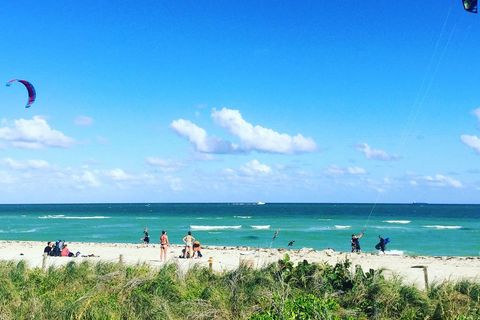 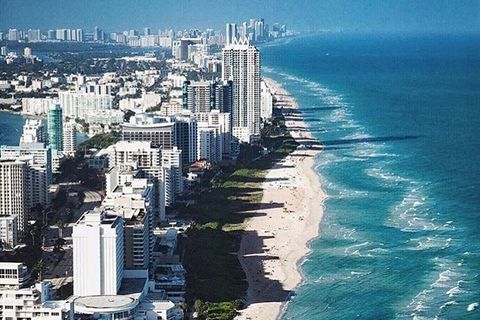