From a post-modern KFC to a traditional Russian Orthodox church, Los Angeles is a feast for the eyes.

It's impossible to pinpoint one architectural style that defines Los Angeles. The dreamy sprawl of LA County is baked into its built environment: single-family homes dwarfed by playful palm trees, bizarre byproducts of the film indsutry's past and garish post-modern icons are just a few structural tokens of LA's storied aesthetic. Amidst all of the topical diversity, there are dozens of buildings that characterize the city. We rounded up some of our favorite architectural curiosities around town. Buckle up and let the tour begin.

East Hollywood
The chief belief system in Los Angeles is the Self, and the yoga studio or acting school serves as high temple. And yet, centuries of immigrants have brought other religions to Southern California, erecting places of worship all over LA County. If you drive down Fountain Avenue east of Western Boulevard, you’ll find the Church of the Holy Transfiguration: a Russian Orthodox church replete with three-bar crosses and onion-domes that rise above the palm trees. It is an unusual sight, but one of the things that makes Los Angeles a feast for the eyes. 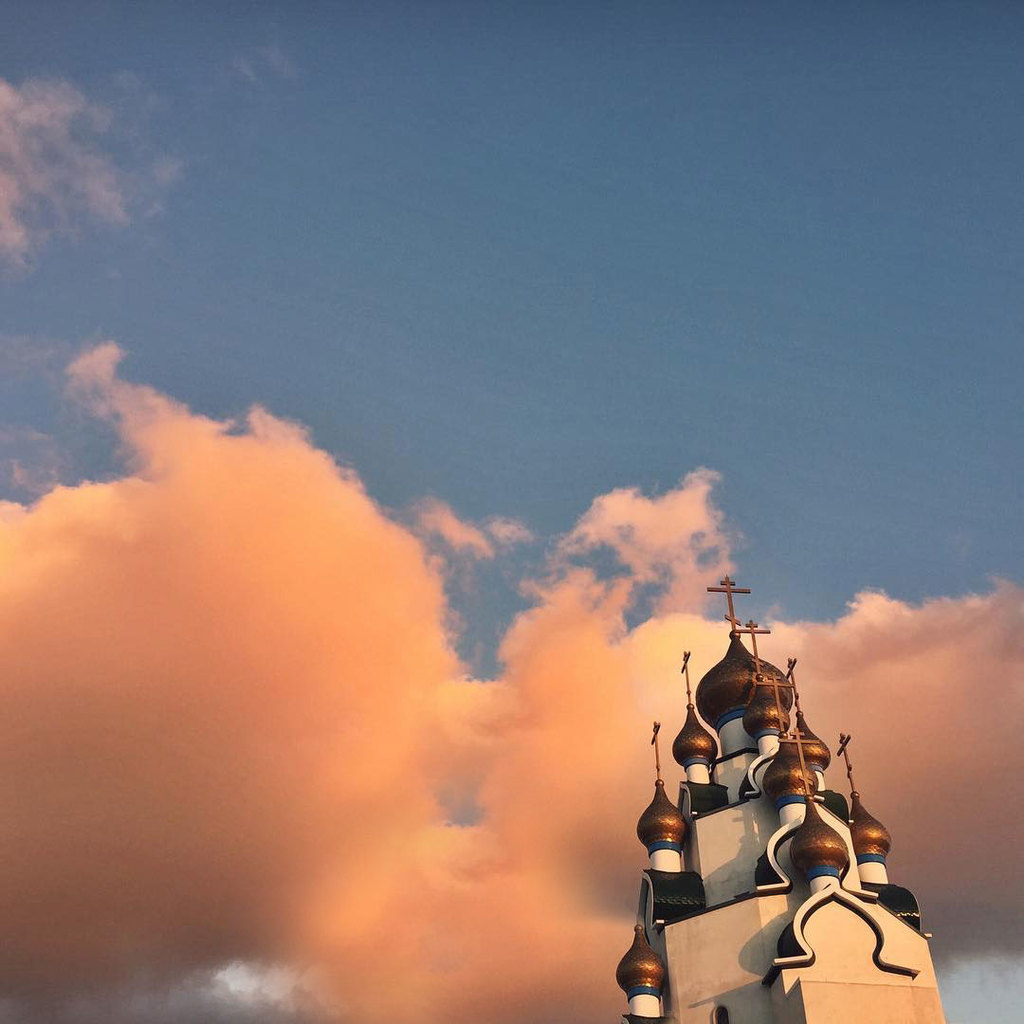 Venice
Before he went on to design international landmarks like the Guggenheim Museum Bilbao and Walt Disney Concert Hall, architect Frank Gehry was designing binoculars. Well, let us clarify: Gehry incorporated the giant binoculars sculpture (by artists Claes Oldenburg and Coosje van Bruggen) into this Venice Beach structure. The building was built between 1991 and 2001, and was the last LA project Gehry did before the Disney Hall. Originally, it housed ad firm Chiat/Day. Today, it is part of Google’s LA footprint. 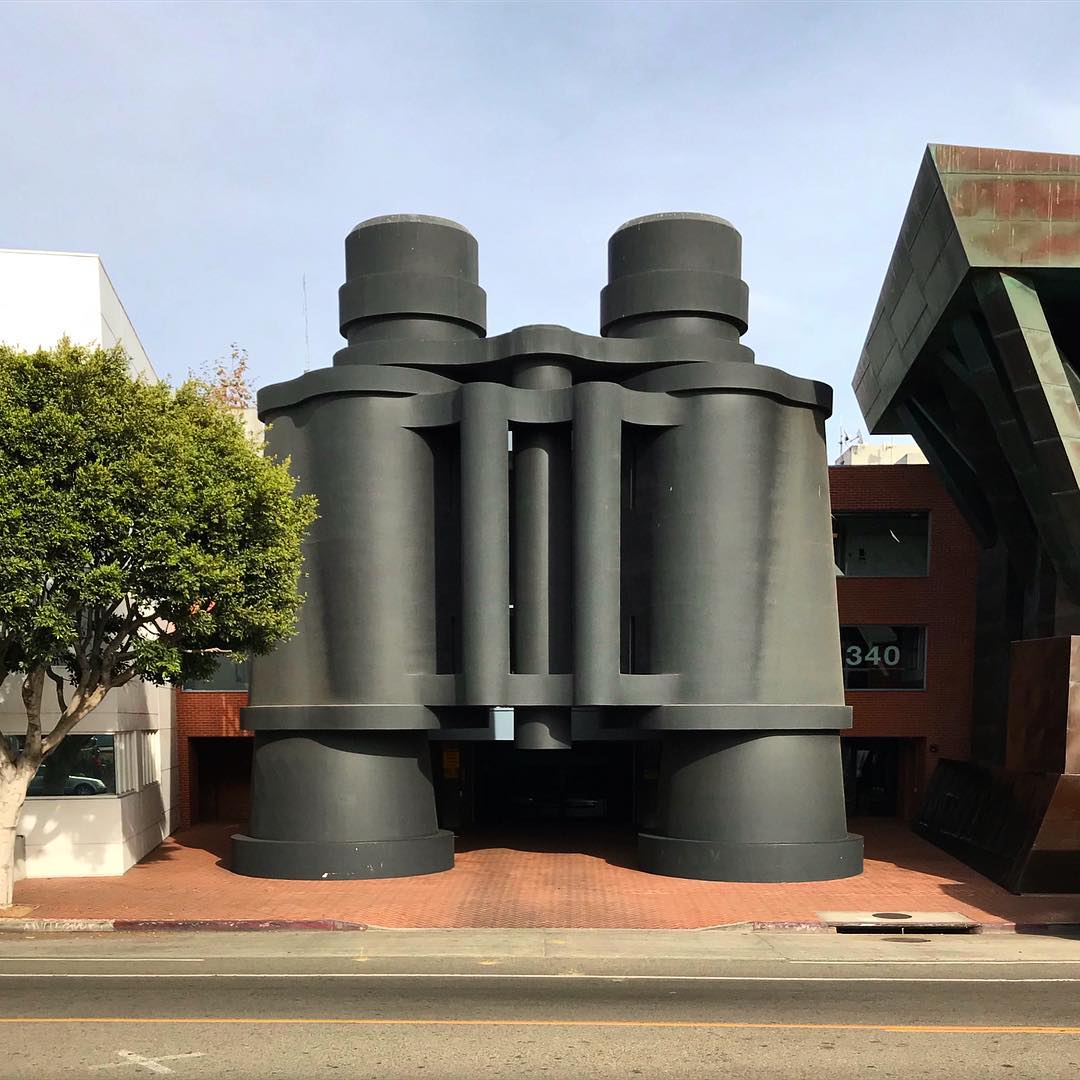 Koreatown
One of the chief architectural critiques of Los Angeles is that the city lacks a cohesive style. And while the miles of craftsman bungalows and Spanish-style haciendas stand as an irrefutable counterpoint, KFC franchise owner Jack Wilke may have been leaning into this notion when he commissioned two Frank Gehry proteges to design his KFC location on Western and Oakwood. Wilke claims he wanted to prove that not all KFCs need to look the same. Well, he definitely proved that, but he may also have built what many call the ugliest building in California. We’re not saying we agree, we’re just saying it … stands out. 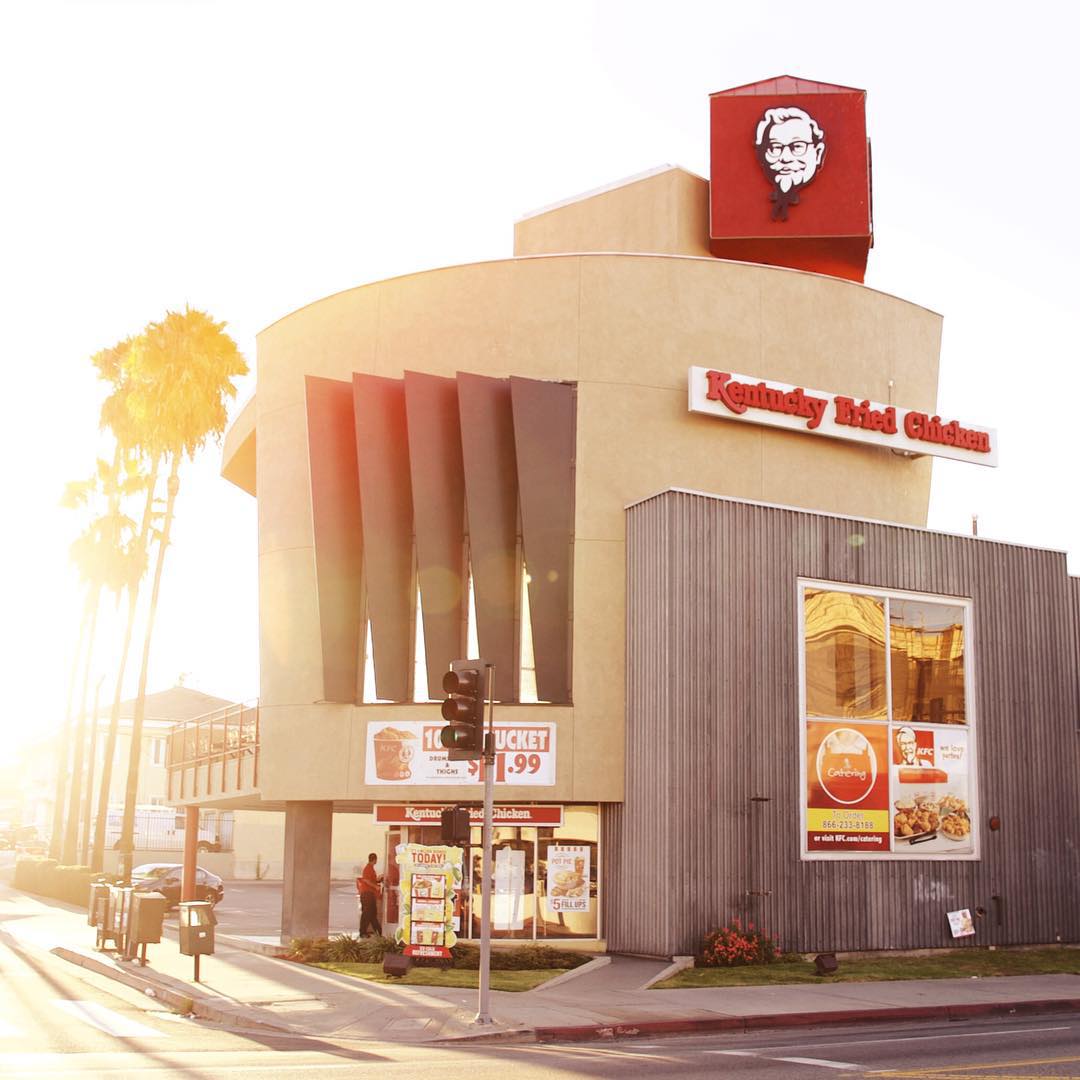 Westchester
For better or worse, car culture in Southern California led to a proliferation of roadside “themed” structures in the post-war boom years of the 20th — hot dog stands shaped like hot dogs, a florist shop housed in a giant flower pot, etc. One of the most famous examples that remains is Randy's Donuts on Manchester Boulevard: a 24-hour donut stand sitting beneath a 32-foot donut. The shop has been featured in countless movies and music videos, and is clearly visible from the plane when touching down at LAX. Suffice it to say: this may be the most famous donut in the world. 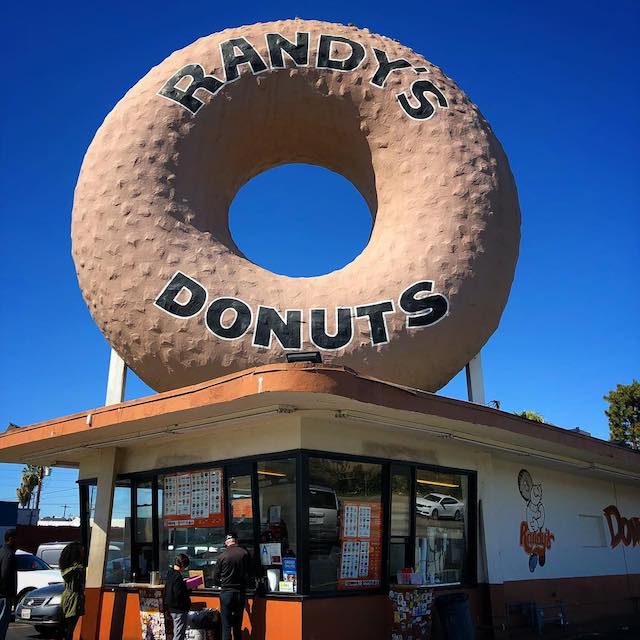 Hollywood
In the 1950s, long before online streaming services and cellphones, Hollywood was facing a threat: television. The response was to go big — really, really big. The Cinerama process debuted in 1953, expanding movie screens to three times their normal size, but a viable theater design wasn’t agreed upon until the completion of the Hollywood Cinerama dome in 1963 (for the premiere of It’s A Mad, Mad, Mad, Mad World). The design was based on famed architect Buckminster Fuller’s geodesic domes (re: the Epcot Center), houses an 86-foot-wide screen and seats over 600. The dome faced demolition in the 1990s (the era of multiplexes), but the structure was preserved when it became a city historical monument in 1998. 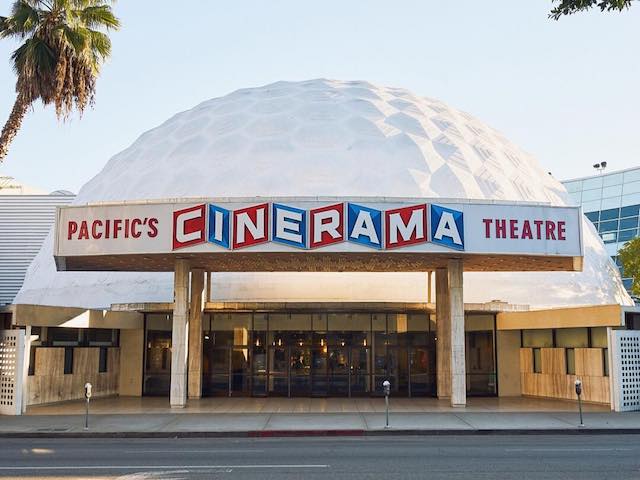 Beverly Hills
If the Spadena House (aka The Witch’s House) looks like it was built for the movies, that's because it was. In 1921, studio art director Harry Oliver designed the structure to house the offices and dressing rooms of Willat studios. The building was originally in Culver City before being transported to its current Beverly Hills location in 1934. By the late 1990s, the house was falling apart and was ultimately saved by local realtor Michael Libow who bought the property and spent several years restoring it. In 2013, the Spadena House was designated by Beverly Hills to the register of historic places. 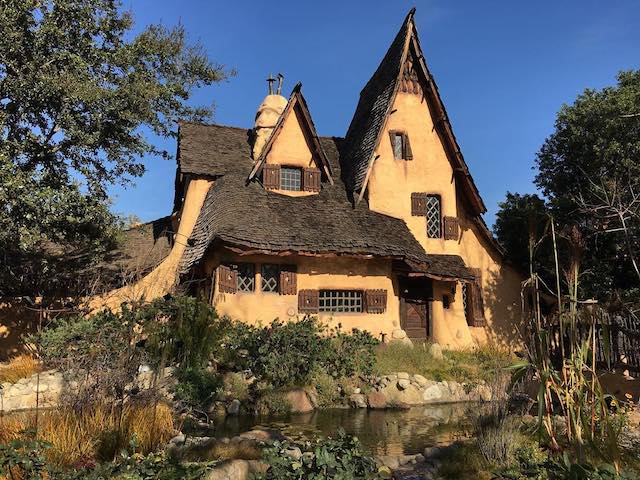 Culver City
It is likely that the area in LA County with the highest concentration of unique buildings per square meter is Culver City’s Hayden Tract. The reason traces back to the 1980s when the Culver City Redevelopment Agency decided to clean up the derelict and crime-ridden neighborhood. Husband-and-wife developers Frederick and Laurie Samitaur Smith began buying up the lots and brought in architect Eric Owen Moss to run free with his design ideas. Over 30 years later, Moss is still designing buildings in the Hayden Tract, and the Pterodactyl, built to hide a parking structure, may be the most impressive. The design won an AIA design award in 1999, and was finally completed in 2015. 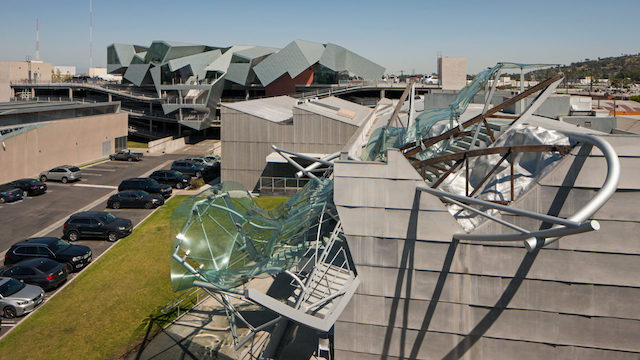 Hollywood
Much like the Church of the Holy Transfiguration, the hilltop Japanese pagoda of Yamashiro stands out in stark contrast to its surroundings. Completed in 1914 by New York brothers Adolph and Eugene Bernheimer, the structure was a private residence until it was sold in the 1920s and became a series of social clubs and restaurants, including the present-day iteration of the Japanese restaurant Yamashiro and an outdoor nightmarket that runs through the summer on Wednesdays. But even if you haven’t climbed the hill to see the sprawling estate, the building's Asian Revival-style serves as a landmark for viewers across Hollywood, which may be why the structure was added to the National Register of Historic Places in 2012. 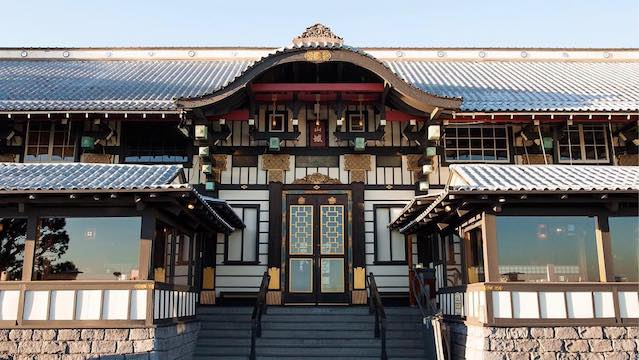 Highland Park
In 1884, Cincinnati journalist Charles Lummis was offered a job at the then-fledgling Los Angeles Times. He took the job and decided to walk to LA, reporting from his 143-day journey all along the way. The dispatches made him nationally famous, and when Lummis finally arrived in the city, he began building a home with his own two hands made from the river rocks he found in a nearby arroyo. In 1910, Lummis finished building his 4,000-square-foot house, which stands as a city park, today. The structure is a cross between Mission-style castle and whimsical California fantasy, and though it now stands mostly unused, spotting the Lummis House while driving past on the 110 freeway is something of an anachronism—a reminder of a time when Southern California was a land of settlers and eccentrics laying the foundations of a future metropolis. 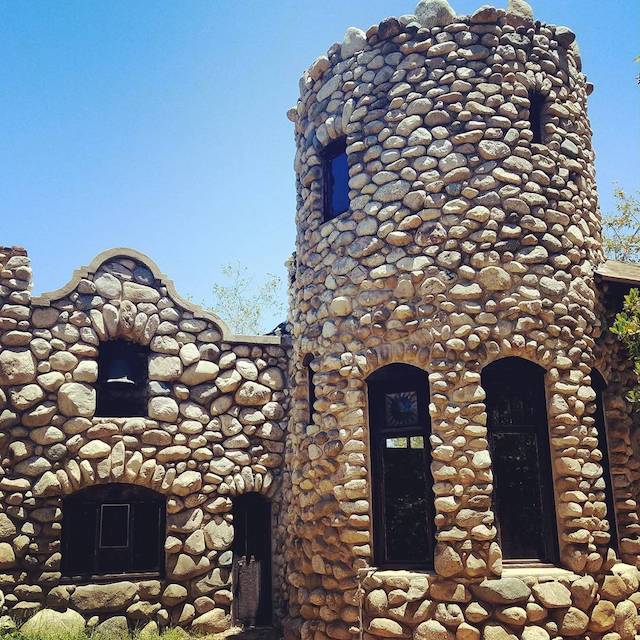 Calabasas
We don't know about you, but when we think 'Malibu' our minds jump to gorgeous beaches, MiCy's 2017 banger, and ... a stunning Hindu mandir? Oh yes. Drive into the Malibu hills along Las Virgenes Road and you'll come across a sprawling temple complex built in traditional Dravidian style and painted white. The 4.5-acre temple was designed by Indian architect S.M. Ganapathi, and began construction in 1981 with funds raised from the local Hindu community. The temple is dedicated to the deity Lord Venkateshwara (a form of Vishnu), and remains open to the public with donation-based educational tours of the site. 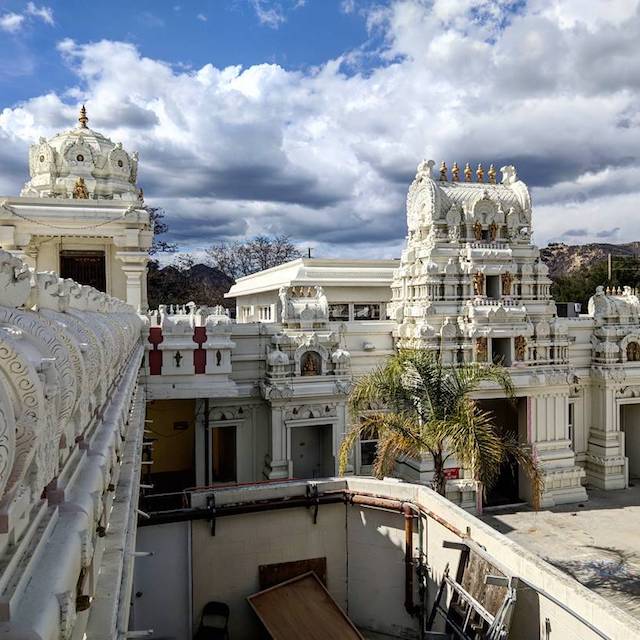