Katherine and Erin, foodie podcast stars, dish out their picks for the best brunches in Los Angeles—from pumpkin pancakes to pastrami eggs benny

According to Katherine Spiers and Erin Mosbaugh, food writers and podcasters behind How it Got in Your Mouth, LA’s food scene is the ‘best in America’ right now. The weekly podcast is more than a talk show; it’s cultural anthropology of food made accessible for you and me. Each episode, the hilarious duo focuses on a different dish, reveals its history and where to find the best iteration of it in LA.
In a recent episode dedicated to eggs Benedict, Katherine sheds light on how our seemingly newfound obsession with brunch is, in reality, entirely unoriginal:
“Did you know that people have been writing about brunch since 1895?! In the Hunter’s Weekly there was an article entitled, Brunch, a Plea that declared, ‘Brunch puts you in a good temper. It sweeps away the worries and the cobwebs of the week.’”
Cheers to that. So, where do these ladies go to clean out the week’s cobwebs?
Erin, a pork and taco fanatic, believes in power move brunches like pho from Golden Deli or a Guerilla Taco paired with a Blue Bottle Coffee. Katherine finds her morning delight by devouring Vietnamese rolls from Thanh My Restaurant. While the two master brunchers are clearly adventurous, both ladies also love a classic American brunch, and have recommendations aplenty for us.
Get Citizine Updates Here
From chicken ‘n waffles to caramel pecan babka and cheddar buttermilk biscuits … prepare your tastebuds for enlightenment:

Fairfax, Salted Caramel Pecan Babka $4, Flourless Lemon Custard Almond Cake $3.50
Katherine Spiers: I don’t often eat baked goods, so when I do, I like for them to be the best. Sycamore Kitchen has the best pastry program going right now. Their salted caramel pecan Babka roll will probably change your life. I can’t emphasize how good that is. Also, try the flourless lemon custard almond cake.

Beverly Grove, Hamachi Tostada $17, Tamago Scramble $14, Reuben Benedict $18
KS: I ended up here by accident and it was one of the best brunches I’ve ever had. Their Hamachi Tostada is a mix of Vietnamese and Mexican flavors and it works so well. It’s light and refreshing. For a carb-loaded hangover killer, the Pastrami Reuben Benedict is just pure indulgence. It’s very heavy but really good. Or the Tamago Scramble, which is basically just eggs and rice but the rice is cooked in bone marrow and it’s amazing. Incredibly good. 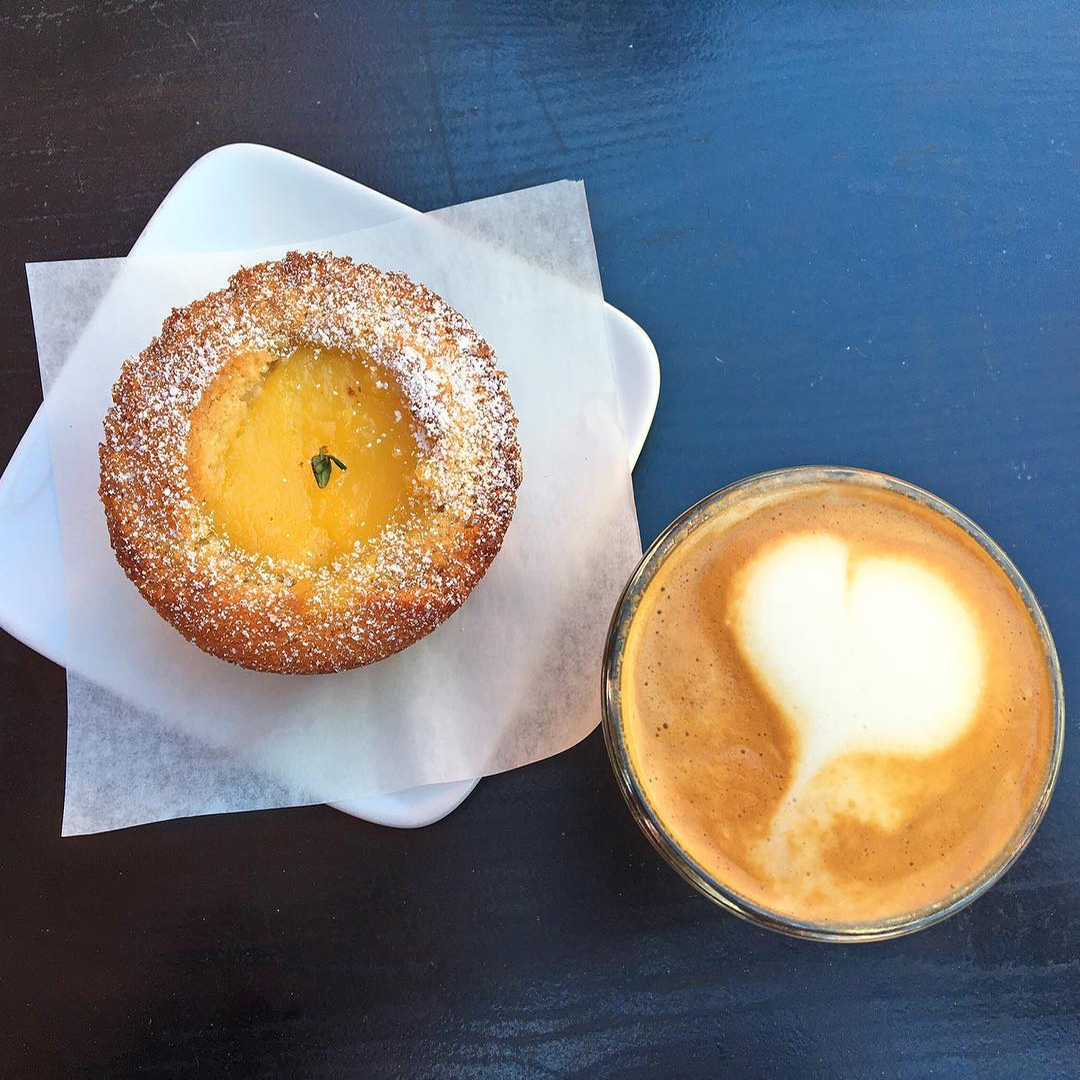 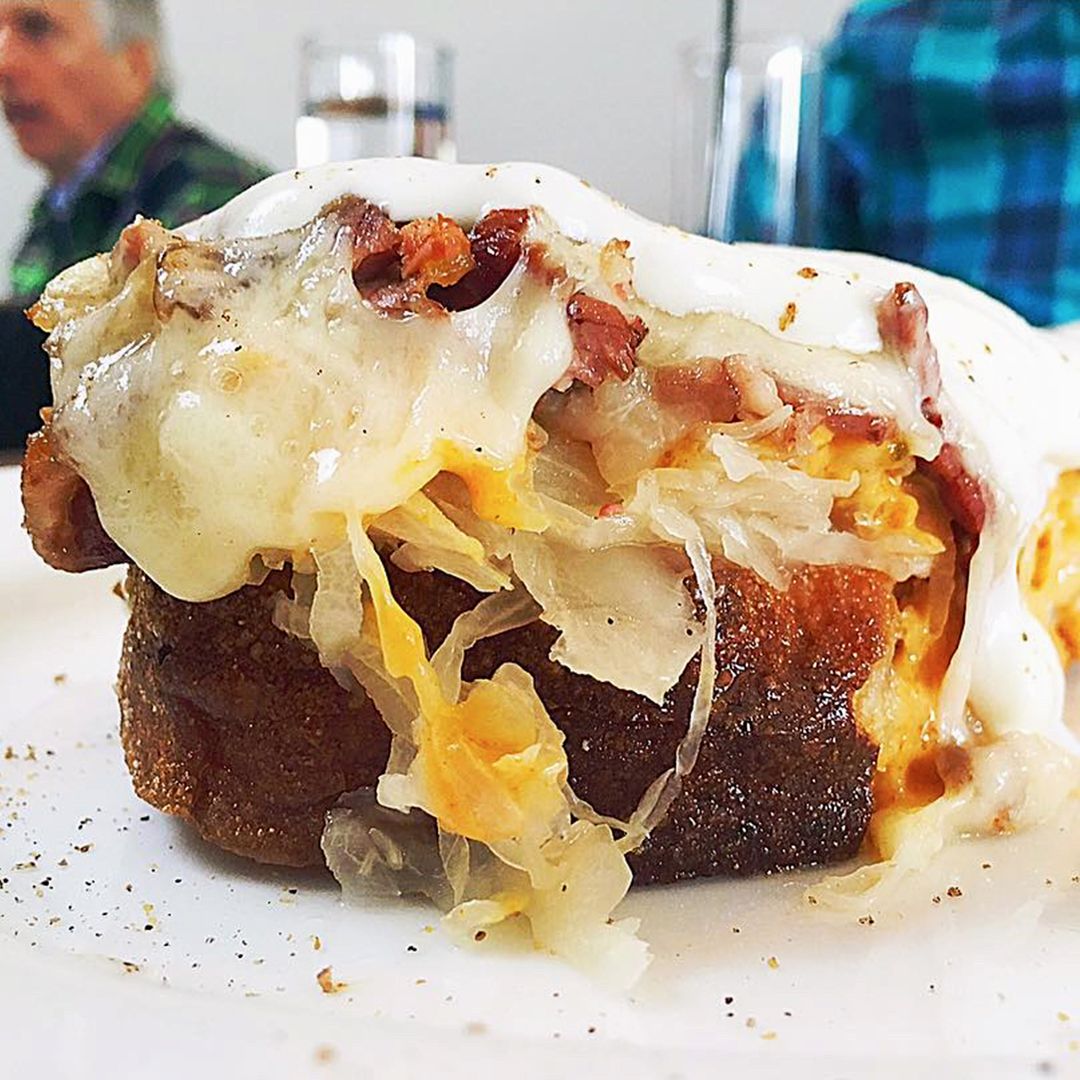 Silver Lake, Beet Cured Salmon Plate $14
KS: They have a beet-cured salmon plate that is absolute perfection: the salmon is perfectly done, the cream cheese is decadent and the bread is from Bub and Grandma’s and it’s really good bread. Brunch here is not too expensive for a Silver Lake locale and it’s also super pretty for Instagram.

Alhambra and Pasadena, Plates from $3.28(S) to $8.28(SP)
KS: I’m a huge fan of dim sum. The dim sum here isn’t cart dim sum, you need to order off the picture menu, but it’s a huge menu. The dim sum is really high quality and the bonus is you could easily get out of there spending only $20. That’s the beauty of the San Gabriel Valley. 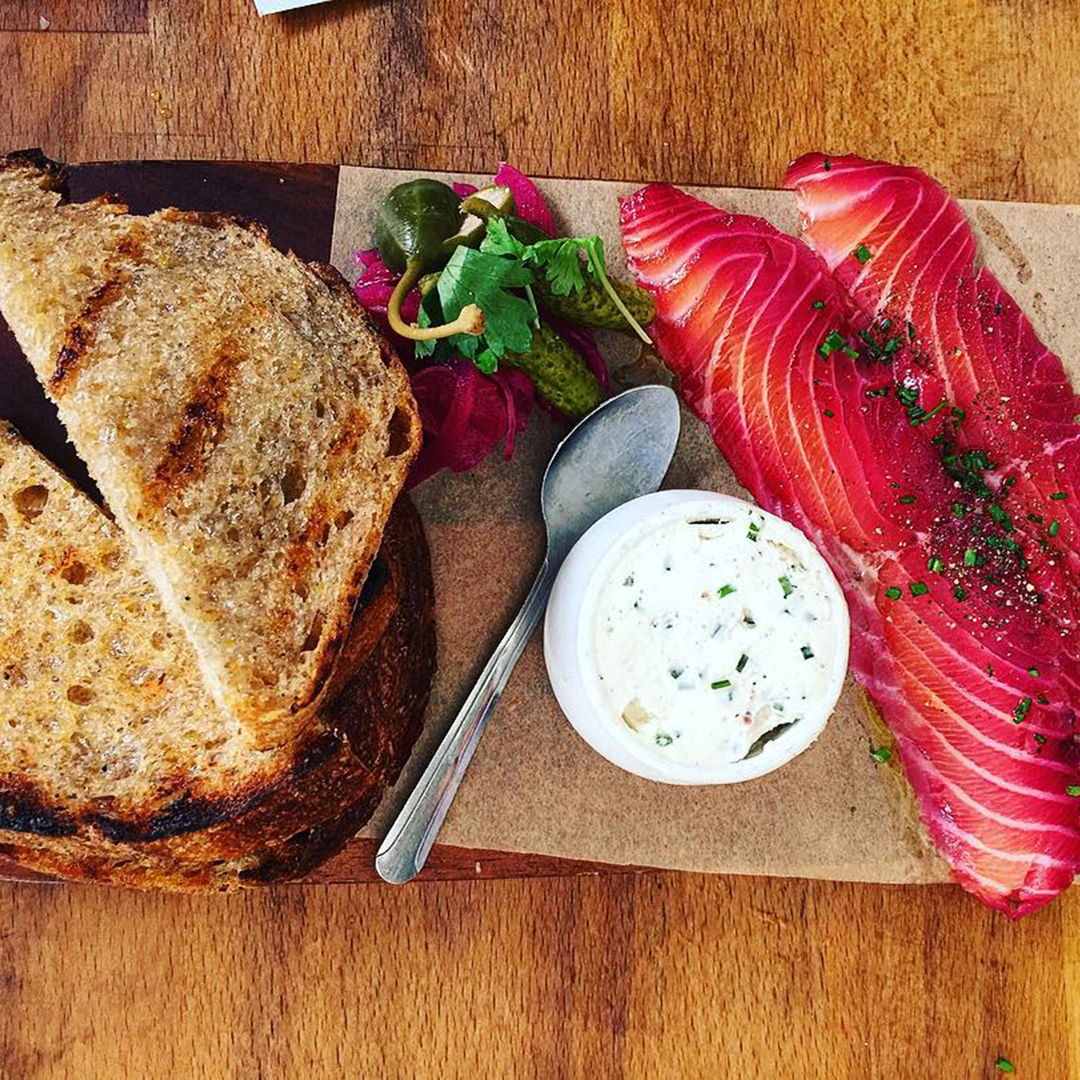 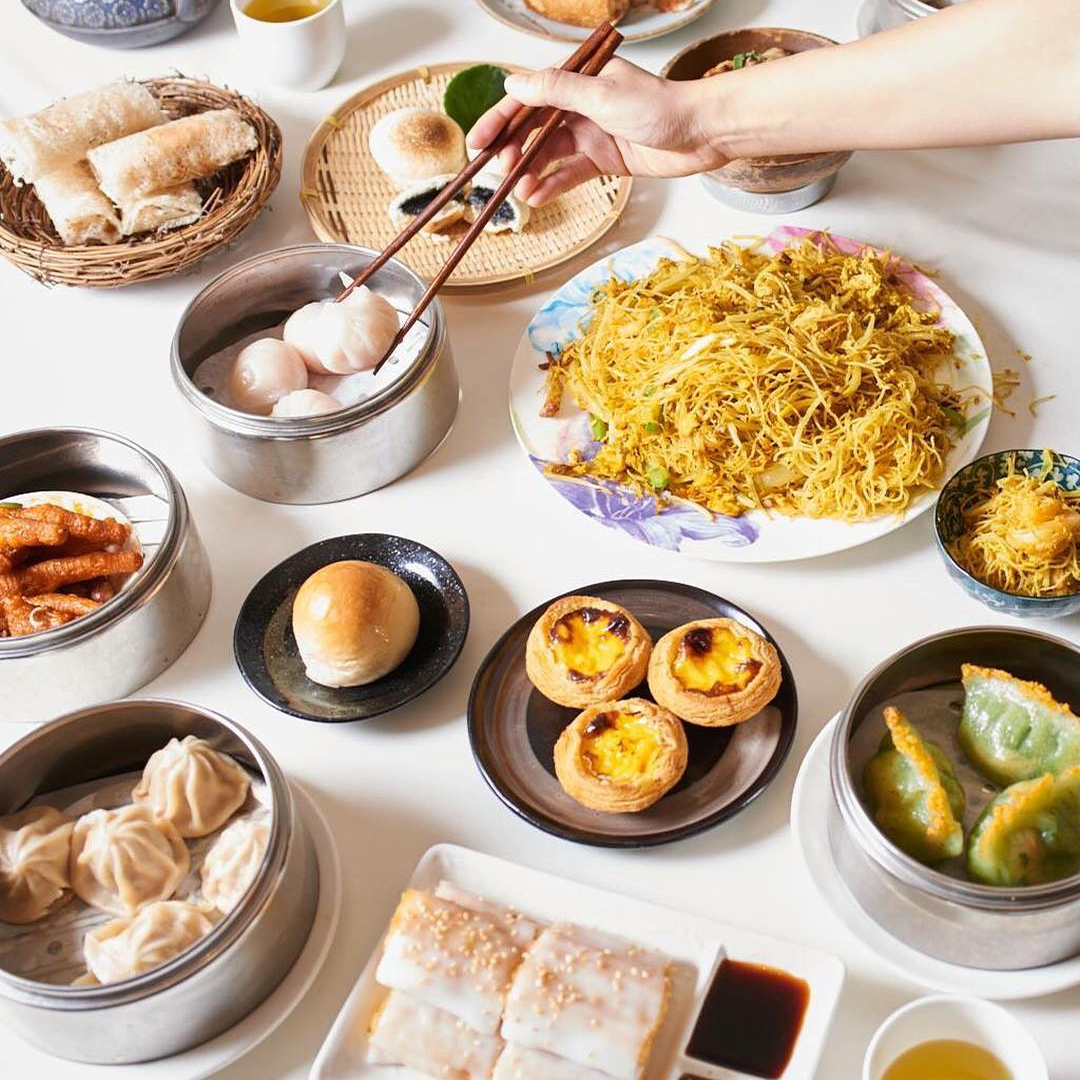 Silver Lake, Eggs Benedict on Potato Nest $13
KS: They have a pretty simple version of an Eggs Benedict but the catch is that it’s on a potato nest and I’m a huge fan of potatoes. I like to get the Benedict with bacon, though you can also get cured salmon. The setting could not be more charming in the courtyard there. It’s a really pretty spot to start your day.

Silver Lake, Buttermilk Fried Chicken and Waffles $16
KS: They literally just opened and I tried a whole bunch of different stuff and I have to say that their fried chicken and waffle is really good. (available weekend brunch only) 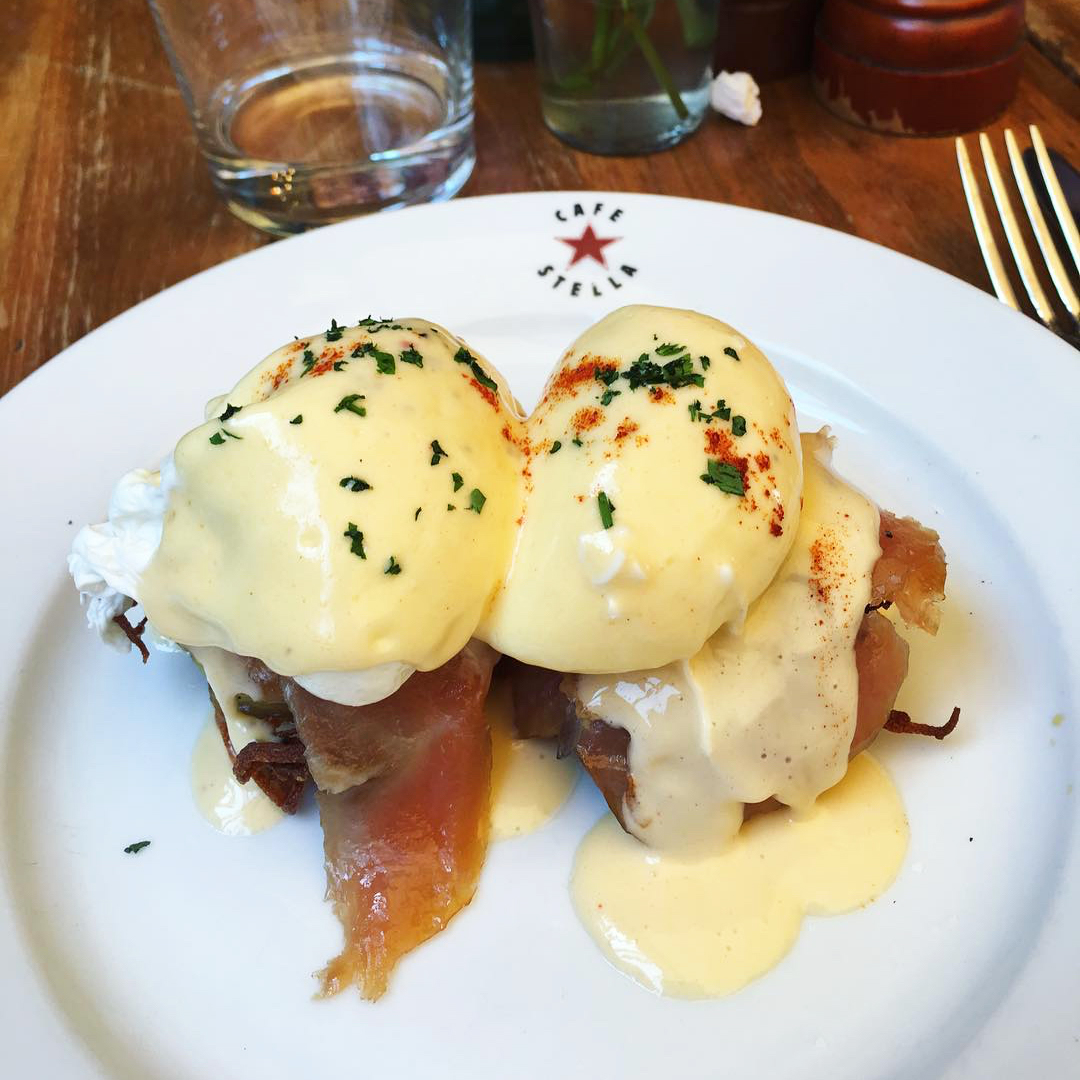 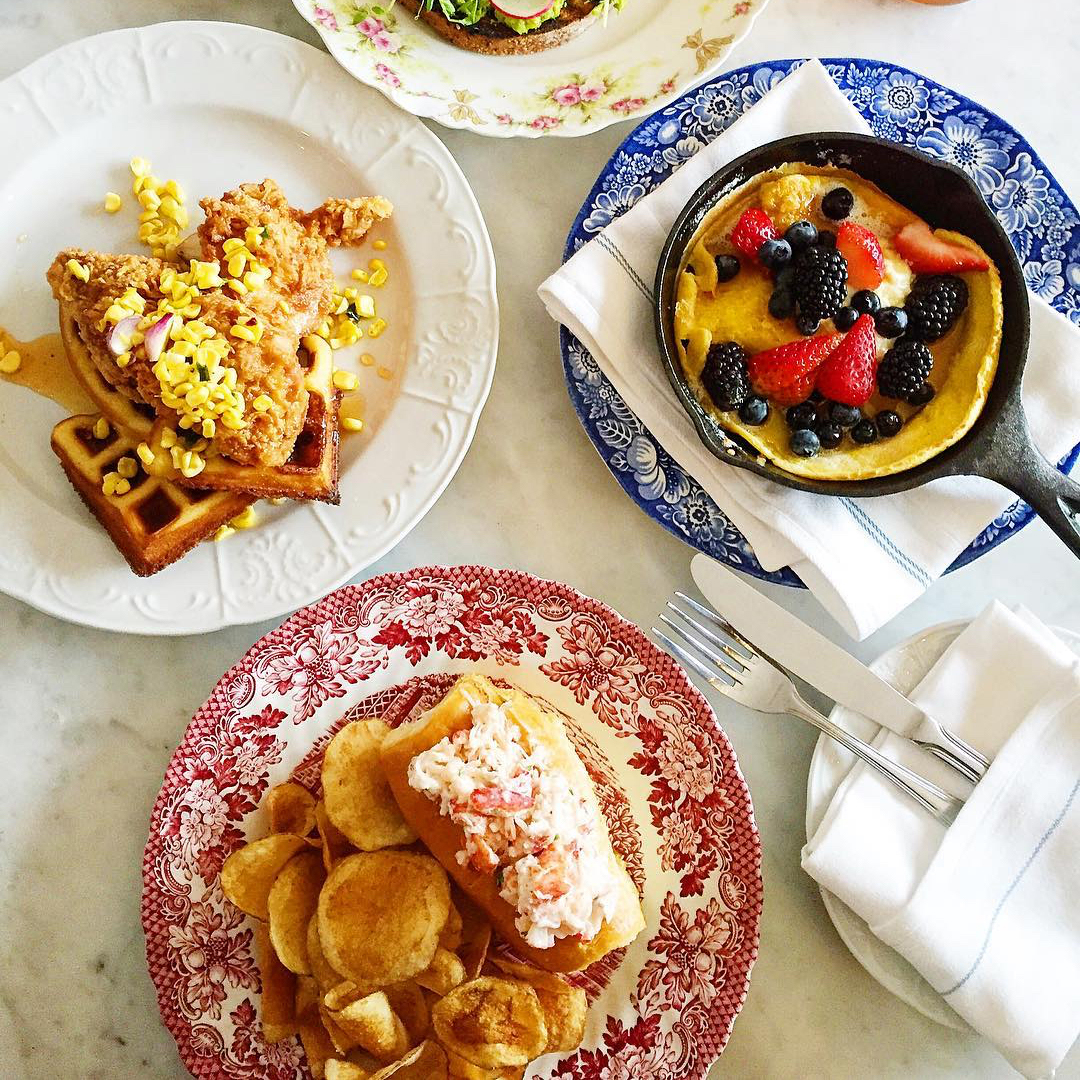 Hollywood, Regular Breakfast $12
Erin Mosbaugh: Their ‘Regular Breakfast’ has two eggs, fingerling potatoes and bacon steak—it’s the most thick cut bacon you’ve ever seen. It’s served with basically a whole baguette. You’re literally gonna have to sleep for the rest of the day but it’s really good. (Breakfast daily, full brunch weekends only)

Fairfax, Chorizo Burrito $7
EM: This is more of a coffee shop and they don’t really have tables but you can get it to-go or eat on the bench outside. It’s totally worth it. The chorizo breakfast burrito is stuffed with roast potatoes, chorizo, cheese and egg and the flour tortilla is really crispy. The perfect burrito in my mind! 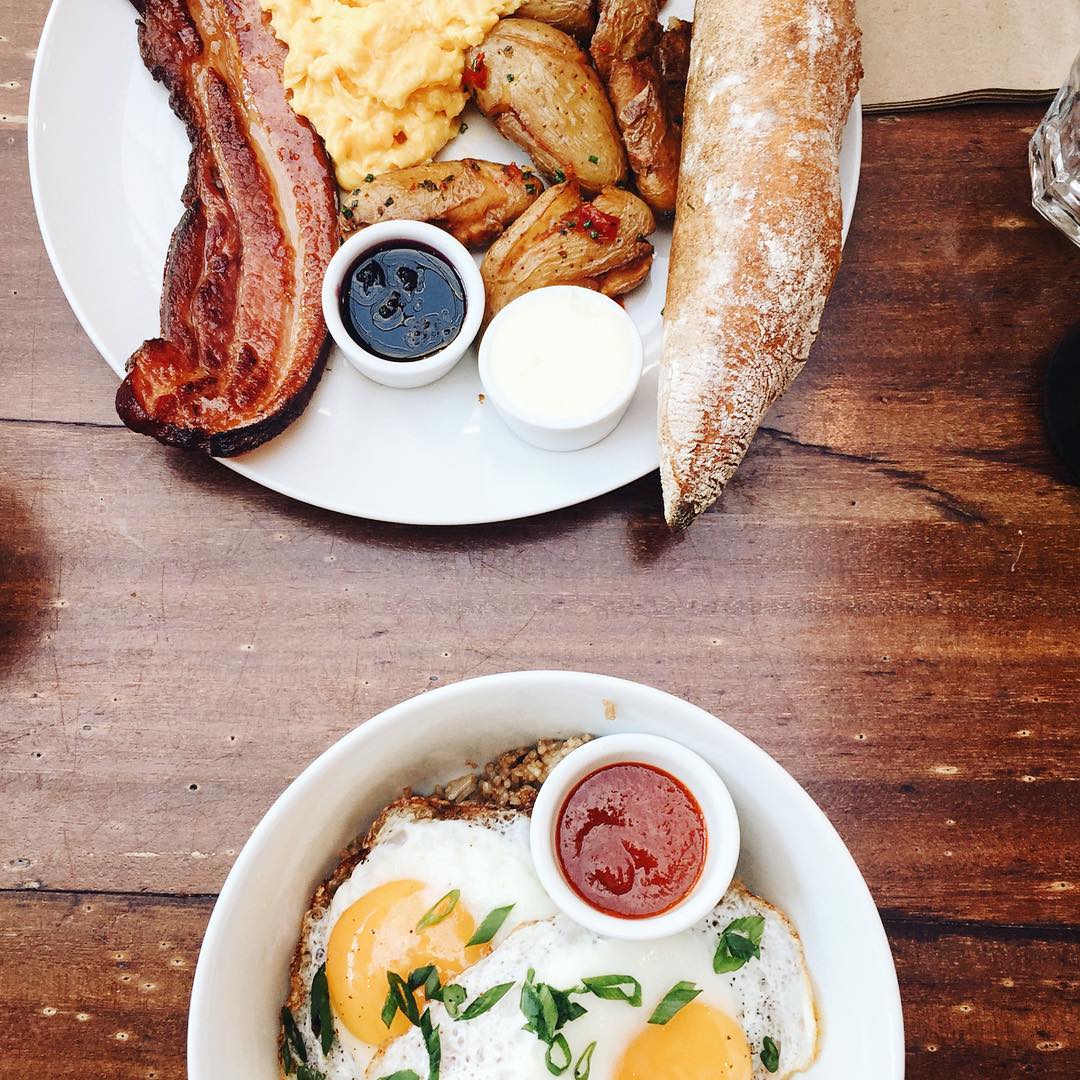 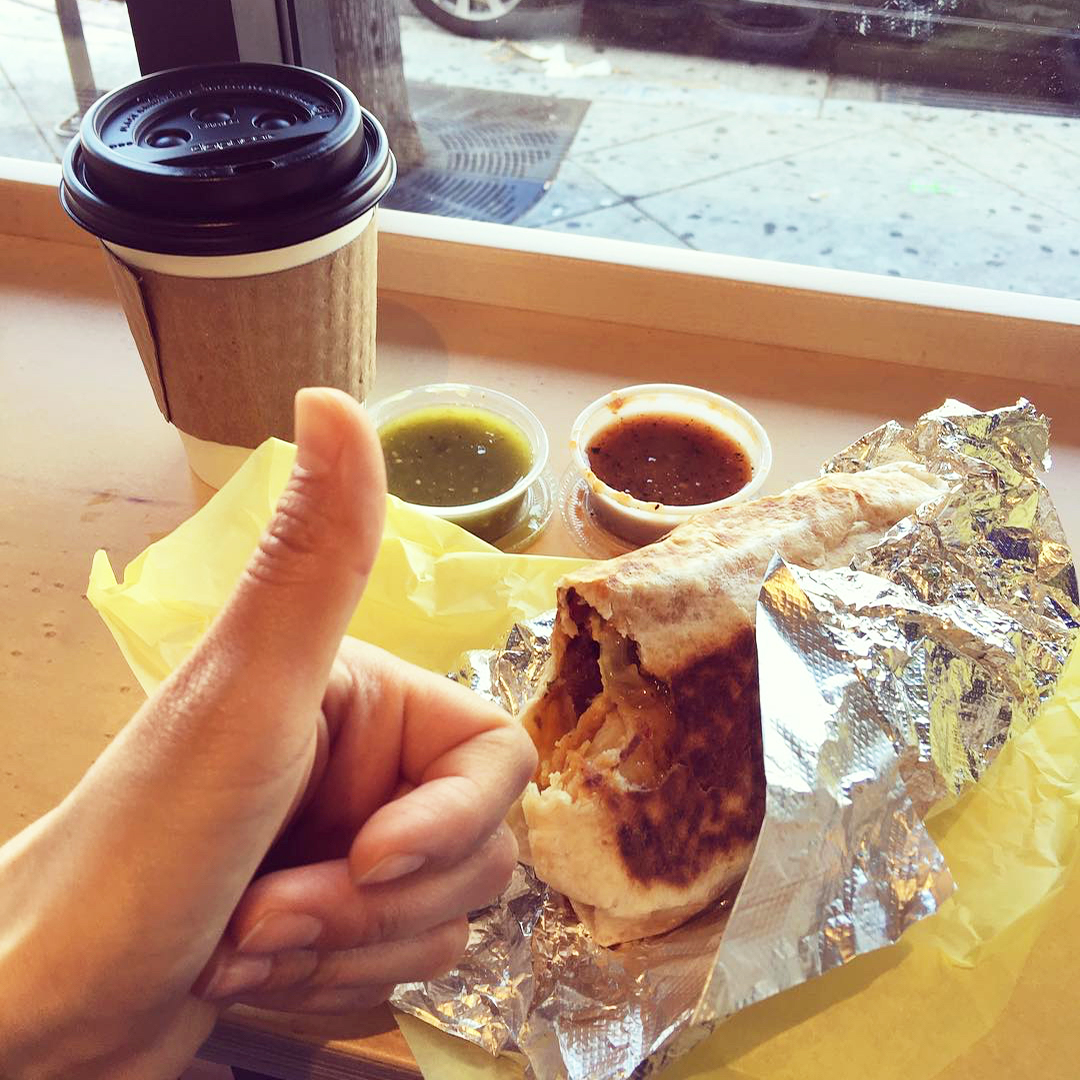 Manhattan Beach, Bacon Cheddar Buttermilk Biscuits $6,  Blueberry Griddle Cake $12
EM: My favorite brunch item in LA is their bacon cheddar buttermilk biscuit with a side of maple butter. Though the baked pancake, which arrives in a cast iron skillet, is really good. 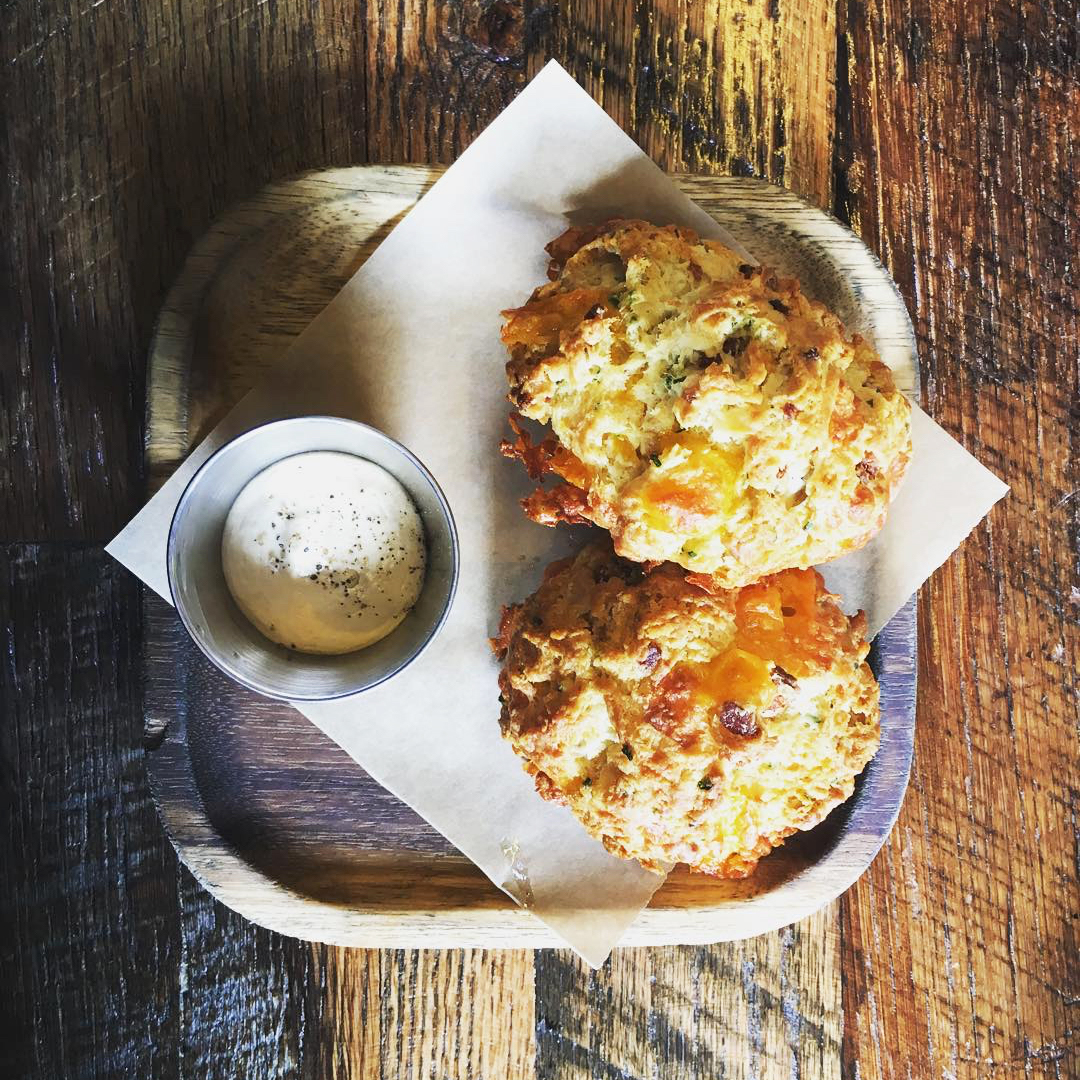 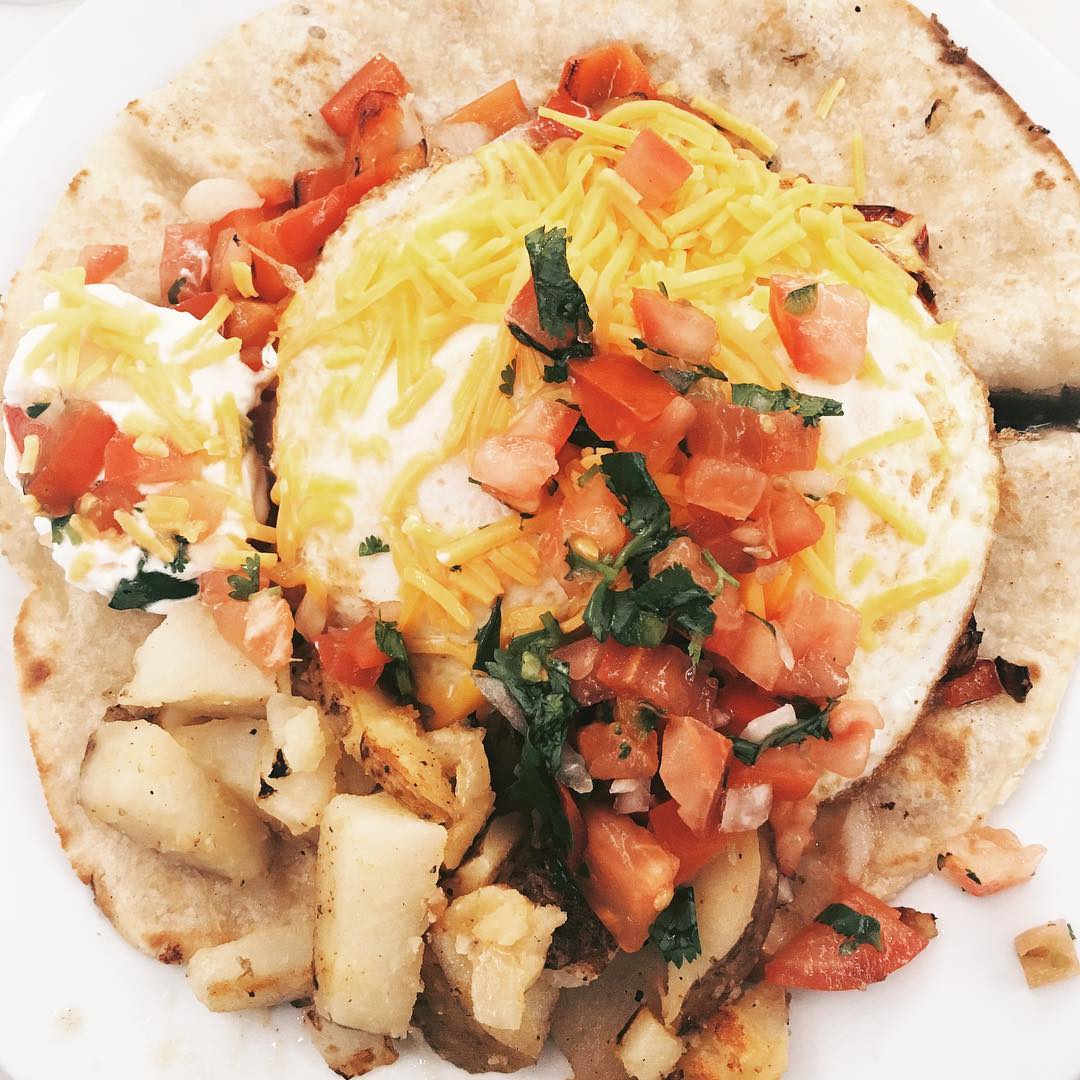 Atwater Village, Baked Pancake with Meyer Lemon Custard $10, Duck Hash $16
EM: Canelé also has a baked pancake. I’m really into baked pancakes, as you can tell. The menu is extremely simple but perfectly executed with really nice ingredients. They have this duck hash with sweet potato, pickled red onion and egg that’s awesome.

Grand Central Market DTLA, Papusa’s $3.25 - $4.00
EM: I love pupusas for breakfast, especially when I’m kind of hungover. I get their bean and cheese or the bean, cheese and pork and they put this citrusy coleslaw on the top. Just perfect. 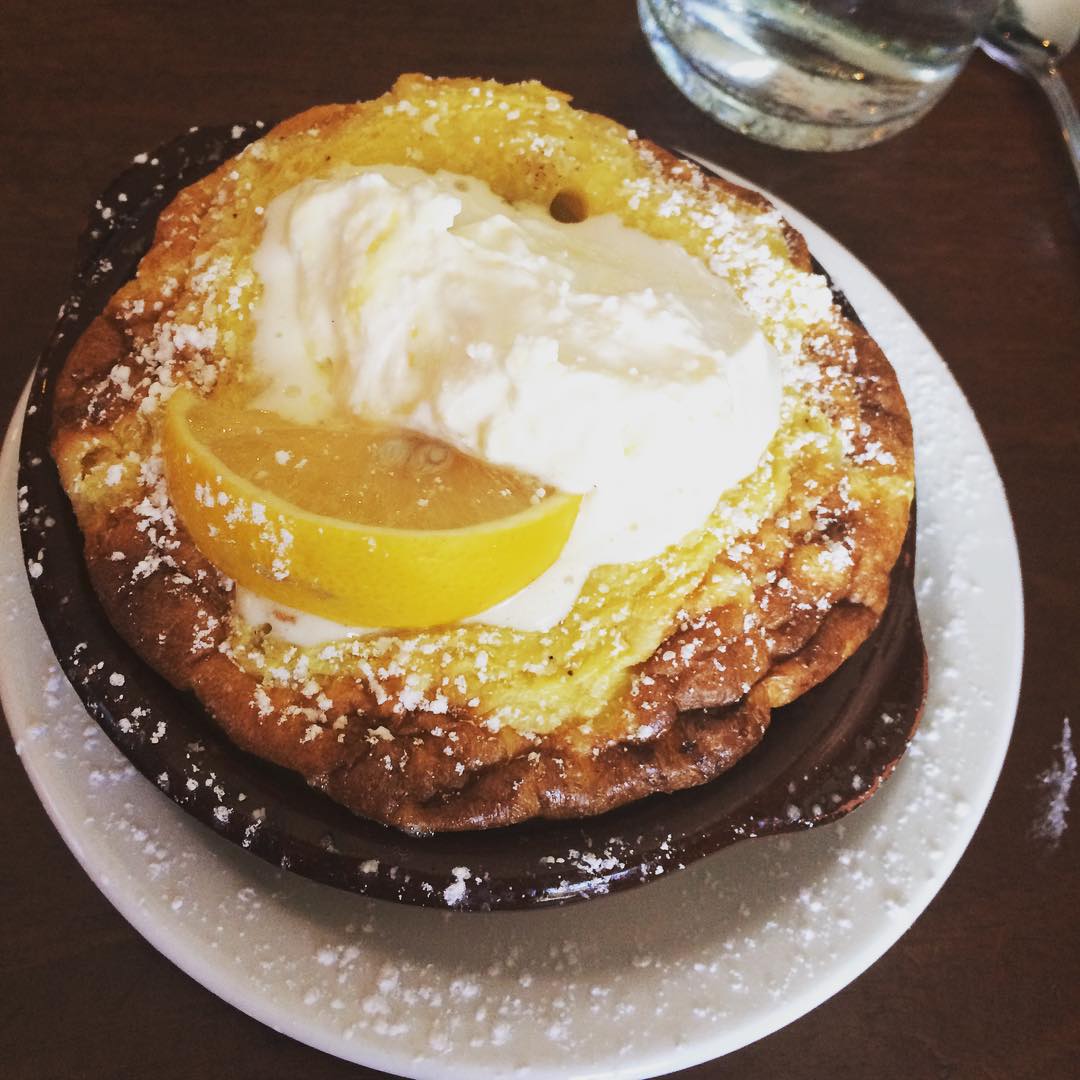 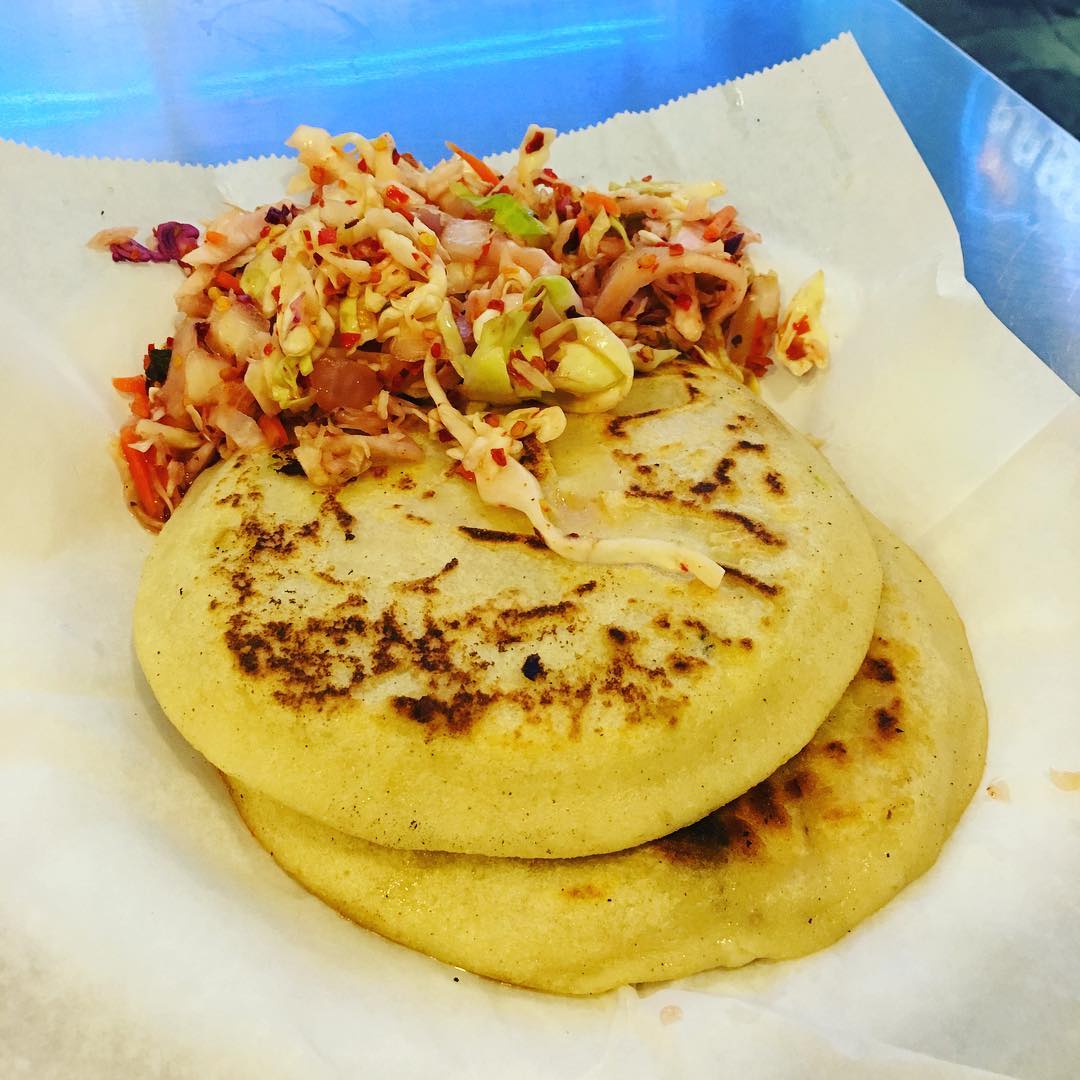 To find out what tasty eats they’re devouring now, tune into How It Got in Your Mouth every Wednesday and follow along on Instagram @howitgotinyourmouth.