An Espresso Crawl Across Los Angeles

One thing is certain: At the end of the day, we all could have used a sedative and a box of whitening strips

Words by Arden Shore Images by Alethea Cho 23 May 2017

If you want to get your finger on the pulse of a neighborhood’s culture, your first instinct might be to head straight for a local watering hole. Bars are cool and all because you can wear your new leather pants no questions asked, romantic suitors might approach you and music blasts loud enough to block out the voice inside your head telling you it’s not too late for the Skrillex haircut. (That ship has sailed.) But after a few shots of who knows what, will you even remember the enlightening conversation you had with that ten who just so happens to live four blocks away from you? You won’t. And even if you do, you’ll likely be too apathetic to shoot her a text hello.

That’s why we here at Citizine propose exploring the city via another kind of shot—the caffeinated kind. Coffee is a beautiful thing because much like alcohol, it has its aficionados who know their pinots from their grenaches and their single-origins from their blends. But unlike alcohol, relationships fostered over coffee are actually built to last. So, we decided to build bridges from neighborhood to neighborhood across Los Angeles’ diverse cityscape and embark on an espresso crawl from the east to the beach. Never heard of an espresso crawl? That’s because we made it up. Here’s how our journey began:
We hit the road and crawled from Highland Park to Venice ... and no we did not get on our hands and knees. We did, however, train our palates to detect the most eccentric of notes, drink boatloads of water and eat mom-approved breakfasts before hopping in a plush Chevy Cruze and driving into the sunrise. We were destined for greatness (Hollywood).

Curtis Stone’s newest venture Gwen, a European-style butcher shop and restaurant, might not be the most intuitive first stop on an espresso crawl. But we caught wind of Gwen pulling a mean espresso, and we can’t exactly afford dinner there, so this was the perfect excuse to pop our heads into the butcher butcher shop. Head butcher Alex Jermasek is no certified barista, but when you have an espresso machine behind your butcher bar and you’re hacking away at meat all day, espresso shots are bound to be a vice. He rips a shot with us and draws some beautiful parallels between meat and coffee—you know, the important things: “An espresso should be drank three minutes within being pulled or you’ll lose the subtleties of flavor. It’s the same as when you braise a piece of meat and take it out of its liquid. The more it steams, the more aroma and flavor you’ll lose. You need to preserve that.” 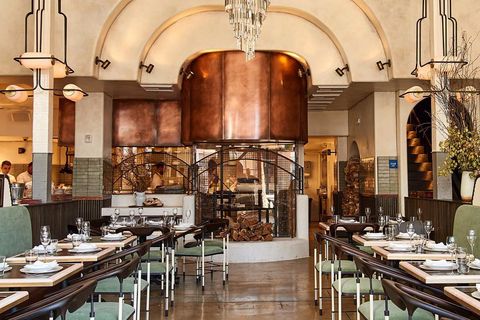 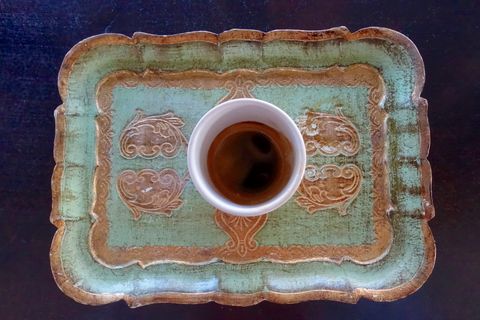 Hollywood
Just across the street from Gwen’s gorgeous edifice is Brew/Well, the most distinguished hole-in-the-wall you’ve ever seen. This beautifully designed coffee window on Sunset Bvld relocated from Koreatown to Hollywood earlier this year and it mean business, sourcing beans from Portland favorite, Heart Roasters. We feed the meter another quarter and let the Chevy rest up before the long journey ahead and make our way to Brew/well’s welcoming walk-up window. We tell barista Shaina Smith about our espresso journey that has, at this point, only just begun. She is amused as she dials in to pull us a round of shots. According to Shaina, an espresso should be: “a perfect balance of chocolate and fruit that’s round in body.”
Espresso: Heart Roasters - Stereo Blend
Beans: 50 percent Guatemala; 50 percent Ethiopia
Arden detects: sharp, tart, dark chocolate
Belinda detects: strong, fruity, acidic 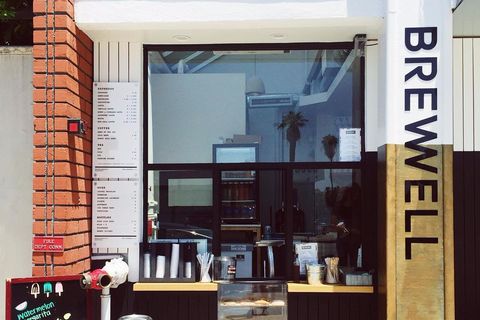 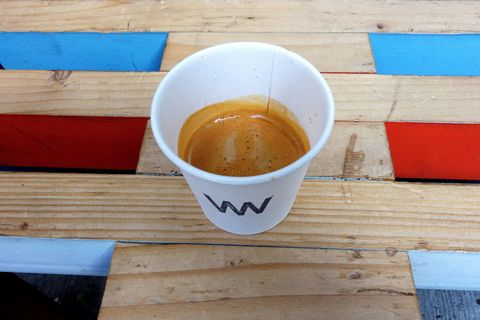 The American poet Mary Oliver once wrote: “I believe in kindness. Also in mischief. Also in singing, especially when singing is not necessarily prescribed.” Opened just five months ago, Kindness and Mischief Coffee has already lived up to its literary name by becoming an equilibrium in Highland Park’s community for, shall we say, both the innocent and the experienced. Expect ripped jean wearing screenwriters, parents rolling in with wagon-loads of children and average Joes who know that K&M is where to go for the perfect cup of joe. We take a moment to admire the mural on the wall, then we cut to the first order of business—espresso. Owner Monique “Mo” Maravilla has one of her baristas dial in and pull us two different espressos. She especially recommends the award-winning Bokasso espresso from Take Flight, and we can taste why. 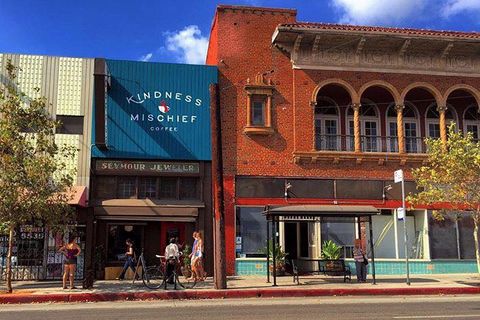 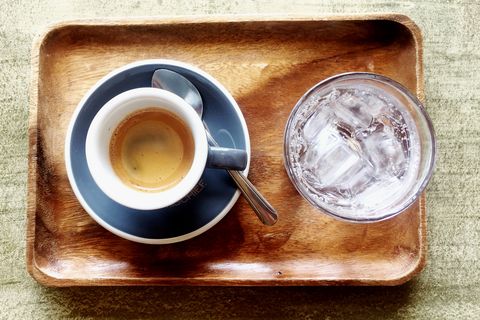 DTLA
Three coffee shops and four espressos deep, we’ve officially got the caffeine shakes. We clamber back into the Chevy Cruze and rejoice in its expansive interior before hopping onto the 110 freeway for DTLA’s financial district. We arrive at Two Guns Espresso, a Manhattan Beach transplant that opened outside the PWC building on Figueroa in April of 2015. Friendly Kiwi co-owner Ted Brown greets us with delight. He asks if we are crazy. We are beginning to grind our teeth. A jovial bearded barista pulls us Two Guns’ signature espresso—a two-bean blend of coffees from Brazil and Colombia roasted by Dillanos Coffee Roasters. Ted describes his perfect espresso as: “smooth and chocolatey with flavor notes on the front, and not too heavy on the back, ” though his go-to drink is a flat white.
Espresso: Dillanos Coffee Roasters - The Two Guns Espresso Blend
Beans: Brazil and Columbia
Arden detects: cranberry, candied walnut, light
Belinda detects: spicy, deep, chocolate 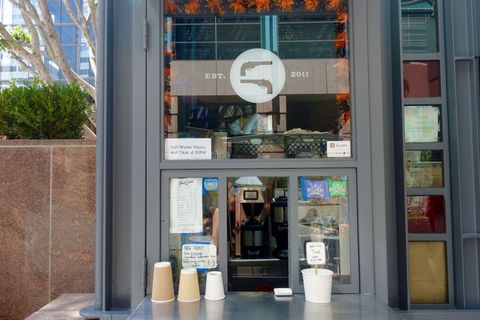 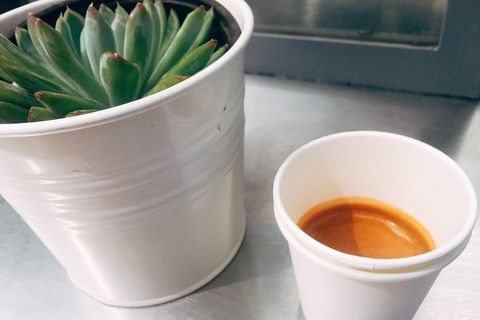 Koreatown
Formerly Bourbon St Cafe, Alchemist in Koreatown is expansive, bustling and design-driven. If we wanted to go into writing hibernation and become one with space and time, this is where we would do it. Not only does Alchemist source beans from four different tried and true roasters and utilize several brewing methods, they also make affogatos. So there’s that. General Manager Marcelo, who has been working in the space (since it was Bourbon St ) for the past five years is clearly a coffee wizard, and describes the perfect espresso as, “sweet, not too acidic or bitter, not too long and not too short, with balance and body.”
Espresso: Copa Vida
Beans: Costa Rica and Brazil
Arden: pear, vanilla, brown sugar 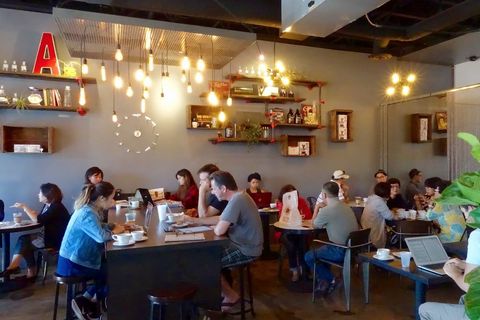 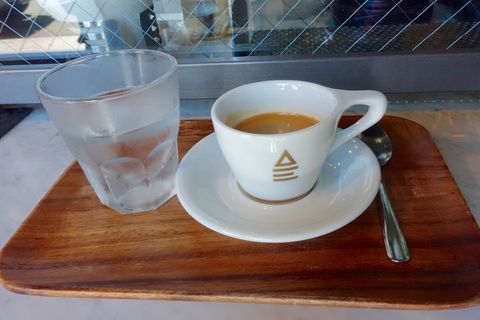 After downing our fifth shots of the day — eyes wide open, hands shakings and brains jittering, we realize that if we don’t eat something seriously substantial, we might never make it to the beach. With Marcelo’s recommendation, we cross the strip mall and duck into KoBaWoo House, a Koreatown classic, for spicy soup and calamari. Because Koreatown. Ever-so-slightly rejuvenated, we head toward Mid-City.

Mid-City
This mid-city staple far surpasses your standard coffee shop. It’s a one-stop mom ‘n pop (and daughter) shop for breakfast, lunch, dinner, beer, wine and, you guessed it, coffee. Co-owner Anya Michelson is not only gracious, dressed to truly delight and foodie certified, but she’s also a coffee purist. “I love coffee, so I want all of it,” she tells us before schooling us on her expansive coffee menu and dialing us in a gibralter and a round of single-origin Coava espressos. According to Anya, Coava in Portland are the pioneers of the third-wave coffee movement. While many prefer multi-bean blends for espressos, she often leans toward single-origins. “Blends are within everyone’s comfort zones. I’m not looking for comfort zone. I’m looking for adventure,” she says with a smirk before knocking one back with us and sending us off with a bag of fresh-baked cookies for the road.
Espresso: Coava Coffee Roasters - Ethiopia Gelana Abaya
Arden detects: pizzazz, tart, approachable
Belinda detects: lemony, tight, bright 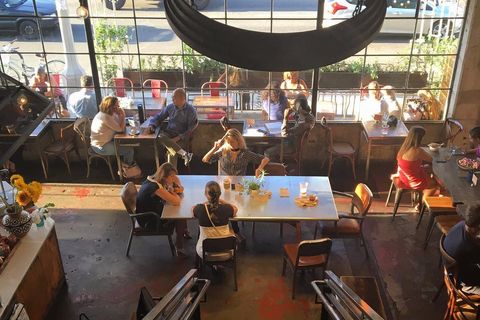 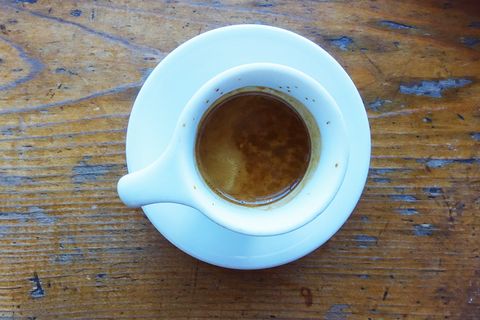 Venice
Alas, we hop on the 10 freeway and are beach bound. Last stop: Venice Beach to hit up Menotti’s Coffee Stop, known specifically for their espresso. We miraculously find street parking, and as we emerge from the car, we collectively sigh at the comforting, familiar sight of the circus that is the Venice Boardwalk set against the sparkling ocean. It’s been quite a day. The Chevy waits patiently for the last time as we pop into Menotti’s to ooh and aah at the beautiful turquoise La Marzocco espresso machine. We recount our journey to the barista, Julie Jordan, who is stunned that we’ve made it this far and are still standing. We are heroes. Before she pulls us a round of single-origin shots, we ask her what the perfect espresso entails, and her answer couldn’t be more Venice, dude. “The perfect espresso doesn’t need to have such a distinct flavor. I like when it’s mellow and takes my mind somewhere,” she tells us dreamily.
Espresso: Four Barrel - Kenyan Sawa Sawa
Arden detects: tropical, pineapple, silky
Belinda detects: tart, acidic 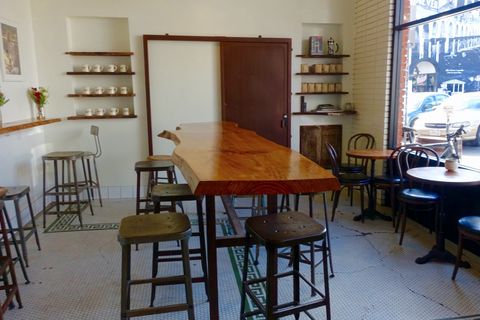 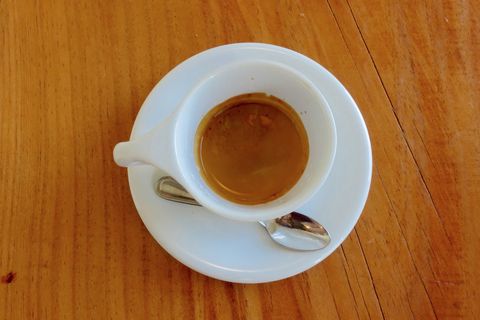 35 miles, six neighborhoods, seven coffee shops and eight espressos later, our caffeine-fueled journey across Los Angeles is complete. As it turns out, espresso tasting is not so far off from wine tasting. You swish aromatic liquids around in your mouth and then you pick a flavor, any flavor, and exclaim it aloud to your compatriots. They will nod in agreement and perhaps suggest other foods and flowers that pop into their heads. You will all be inadvisably buzzed. It will be beautiful.
+++++++++++++++++++++++++++++++++++++++++++++++++++++++++++++++++++
Arden Shore is the editorial director at Citizine. Even though coffee does not raise your BAC, she suggests enlisting a designated driver if you embark on an espresso crawl of your own. See what catches her eye at @ardyparty.