The artist behind the Ideal Woman series empowers women through her art, and now she's sharing which gallerists in Los Angeles inspire her ...

LA-based conceptual artist Allie Pohl has had it with society’s unrealistic beauty and body standards—for XX and XY chromosome holders and beyond.
“Every week, I write about a woman I am crushing on and in return I ask that woman to write about a woman she is proud of. No one, man or woman, can accomplish their dreams alone,” says Allie of her Ideal Woman Crush campaign.
Remember when Lena Dunham flaunted her gloriously stubby body in intentionally unflattering ensembles all over NYC on Girls? Or when Zendaya stood by her decision to wear dreads to the Oscars despite the barrage of tone-deaf disses from the media? These are just a few women raising fists to the “Size (and age and hairstyle and ...) Matters!” drone that stifles fashion, film and more.
Allie’s Ideal Woman Crush campaign is just a small part of her Ideal Woman series, in which she challenges culturally implemented notions of perfection by satirizing Barbie’s unrealistic proportions. For example, with Hermathen, Allie has created a sculpture of Barbie’s 36-24-36 pelvic region and planted a delightfully plush chia plant where pubic hair ought to be.
Get Citizine Updates Here 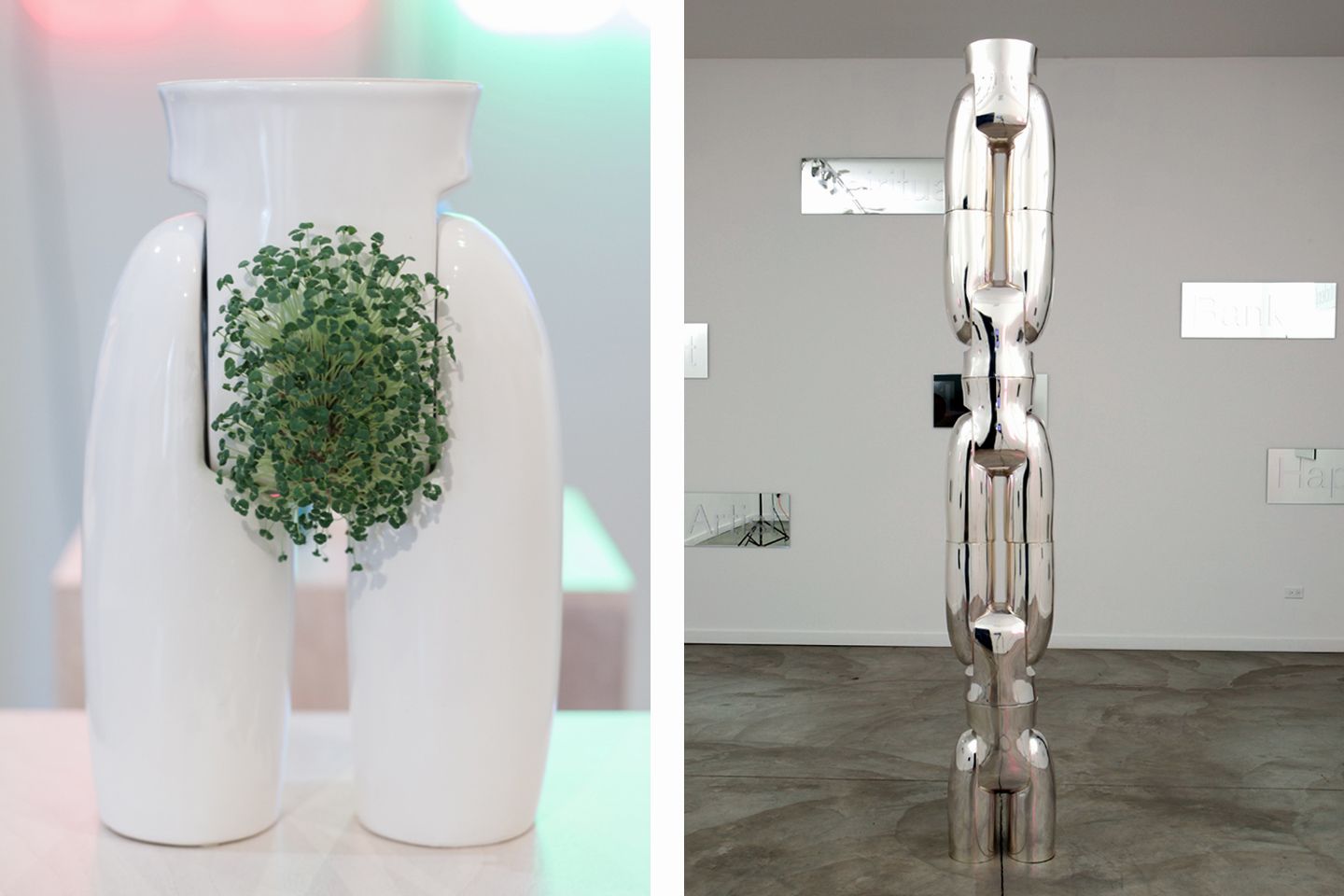 The avatar that Allie has actualized symbolizes anti-perfection and is repeated throughout her work in sculpture, video, ceramic, installation and the more accessible and very on trend jewelry (spotted on the likes of Lena Dunham, Rosario Dawson, Sophia Bush and Jill Soloway to name a few) and stickers. If you take a closer look, The Ideal Woman smiles back at you—a reminder that she is an unrealistic, oversimplified conception of society.

“It is a reminder that you are the ideal woman—perfectly imperfect,” the 31-year-old creative enthusiastically explains.
How’s that for a fuck you to Mattel and Western society’s deeply entrenched patriarchal beauty standards for female bodies to be sans pudge and pubes?
While Ideal Woman might be Pohl’s most renowned series, her others also relentlessly bring social taboos into focus. Whether photographing her underwear between her knees in bathrooms all across Los Angeles for her series Hot Seat, or dissecting male mannequins to highlight the transformation of society’s conception of the ideal male form in her new Peacocking series, the topic of gender is always in question. 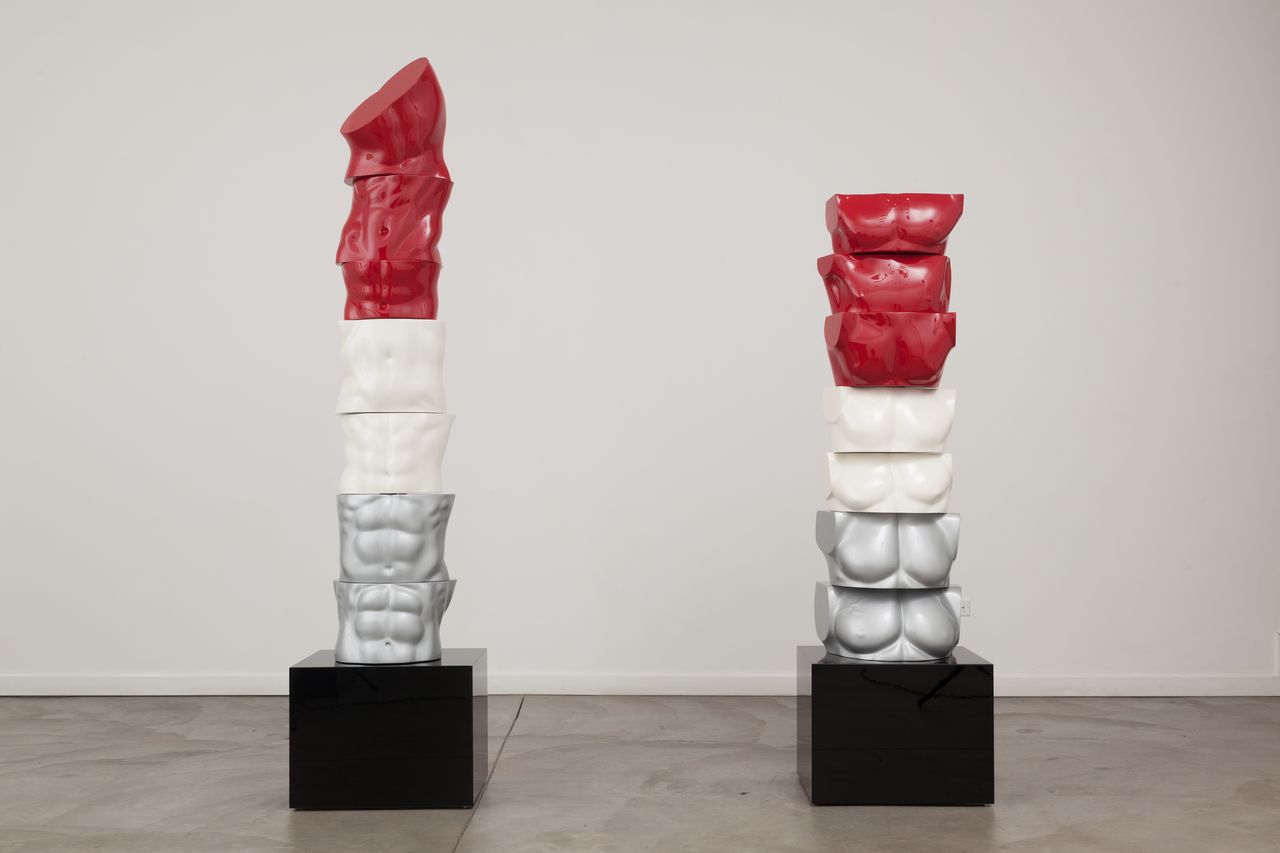 Abs and Pecks from Peacocking series 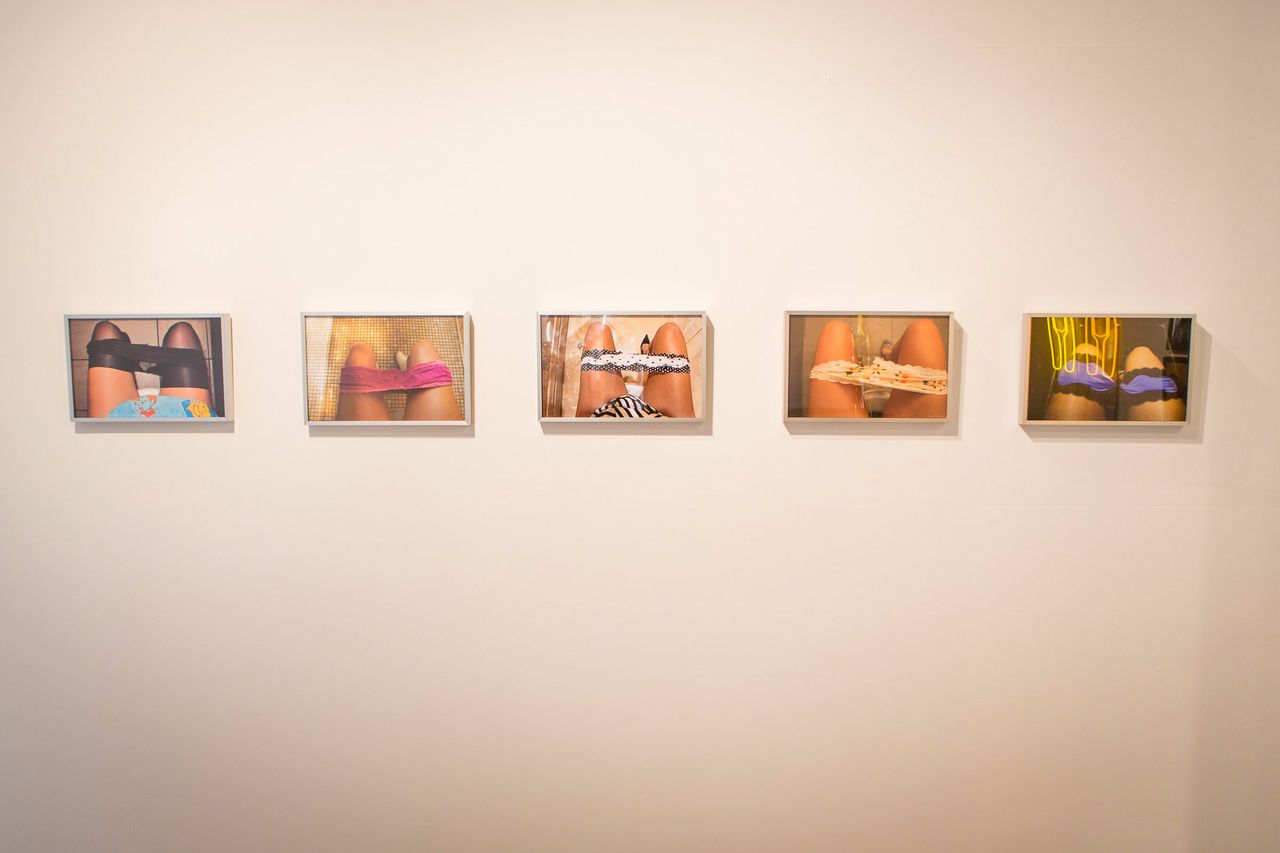 Obviously, she’s making her mark on the art world with cultural shattering themes, but what’s the current status of women in art as a whole?

“Historically, women have been much less visible in the art world. In the 80s, the Guerilla Girls’ mission was to bring racial and gender inequalities in the art world to the forefront. They made billboards and posters showing the gender ratios of males versus females in museums and galleries. This idea was revisited in 2014 by LA artist Micol Hebron who got a group of artists together to tally gender ratios in LA and New York and found that 70 percent of artists represented by commercial galleries in the two cities were men-oriented,” asserts Allie.
But all hope is not lost, ladies (and gents!)
“The world is changing. Females are getting higher positions, higher salaries, and are slowly closing the gap. More LA galleries are run and owned by females and hopefully they will give women more opportunities to show and place their work,” Allie says.
Speaking of female gallerists, what are Allie’s favorite art galleries in Los Angeles powered by women?
Read on for the girlpower gallery guide, highlighting the women behind the gallery with some photographs taken by Allie herself: 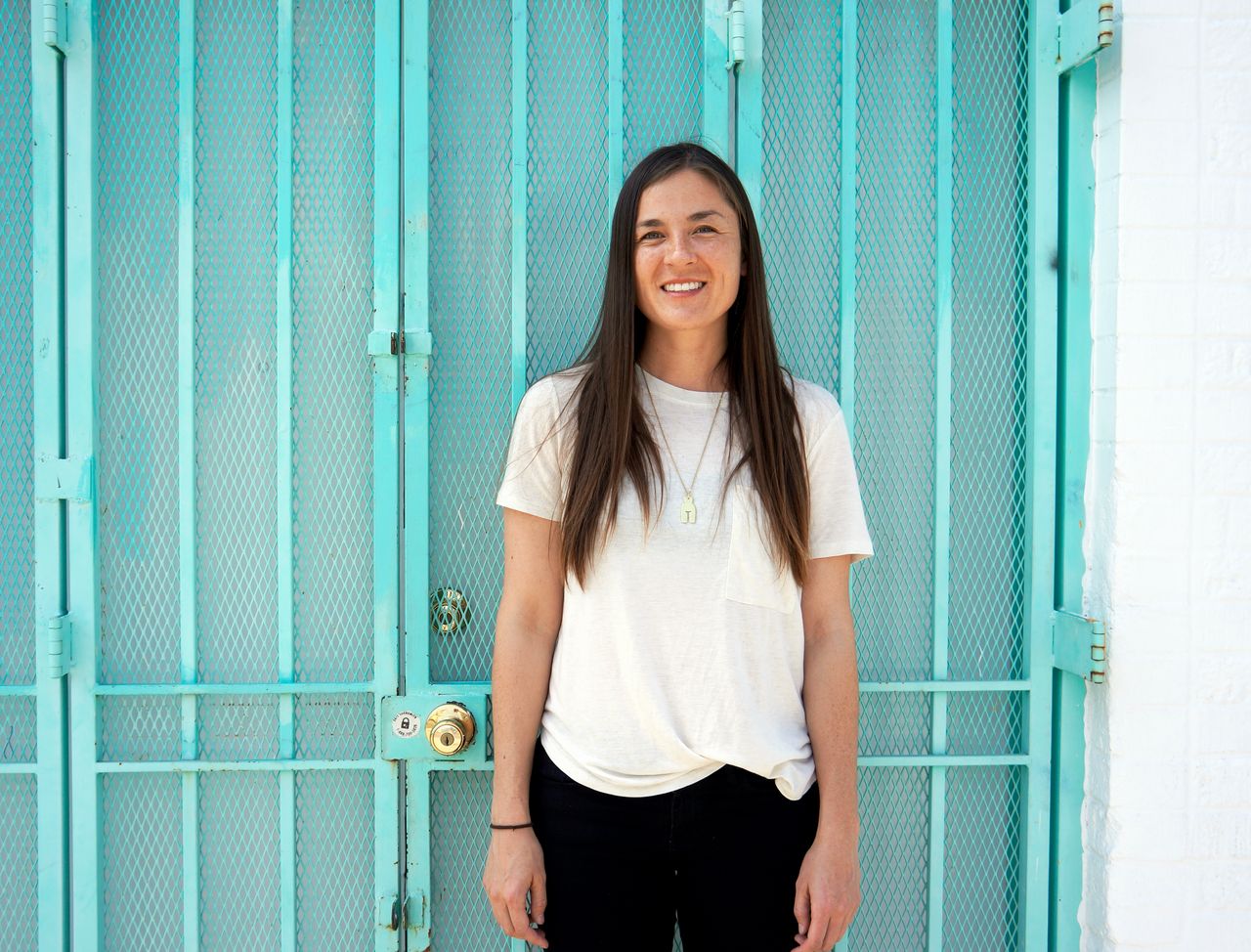 Pauli Ochi outside of her project space in West Adams. Image by Allie Pohl

Allie Pohl: OCHI Projects was founded in 2015 in the West Adams district of Los Angeles. Pauli Ochi’s vision for the project space is to expand beyond the scope of a traditional gallery program, with an emphasis on installations. OCHI encourages site-specific installations, performances, and events to foster education and dialogue in the community about contemporary art. Pauli used to be the director of Ochi Gallery in Sun Valley, Idaho, which was founded over 40 years ago by Pauli’s parents. Pauli is truly a gallery girl! 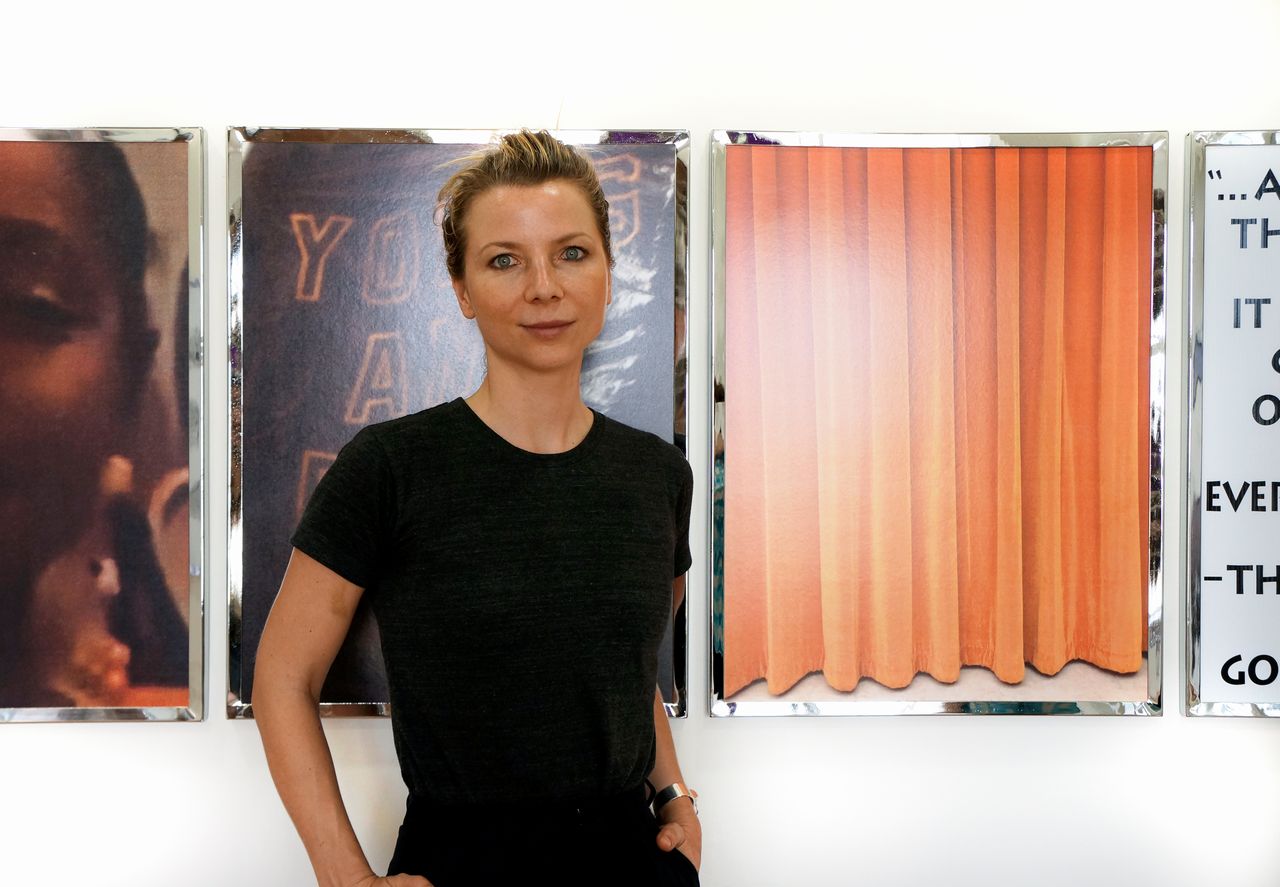 Karolina Dankow and a work by Martine Syms at Karma International. Image by Allie Pohl

AP: Karma International was founded in 2008 by Karolina Dankow and Marina Olsen in Zürich and has recently expanded to Beverly Hills. Dankow and Olsen place a strong emphasis on unique conceptual positions, expanding art ideas by presenting engaging work with a combination of individual artists and spirited thematic group shows. The gallery is definitely worth a visit while you are shopping on Rodeo. It’s a hidden gem above Villa Blanca on the 4th floor. 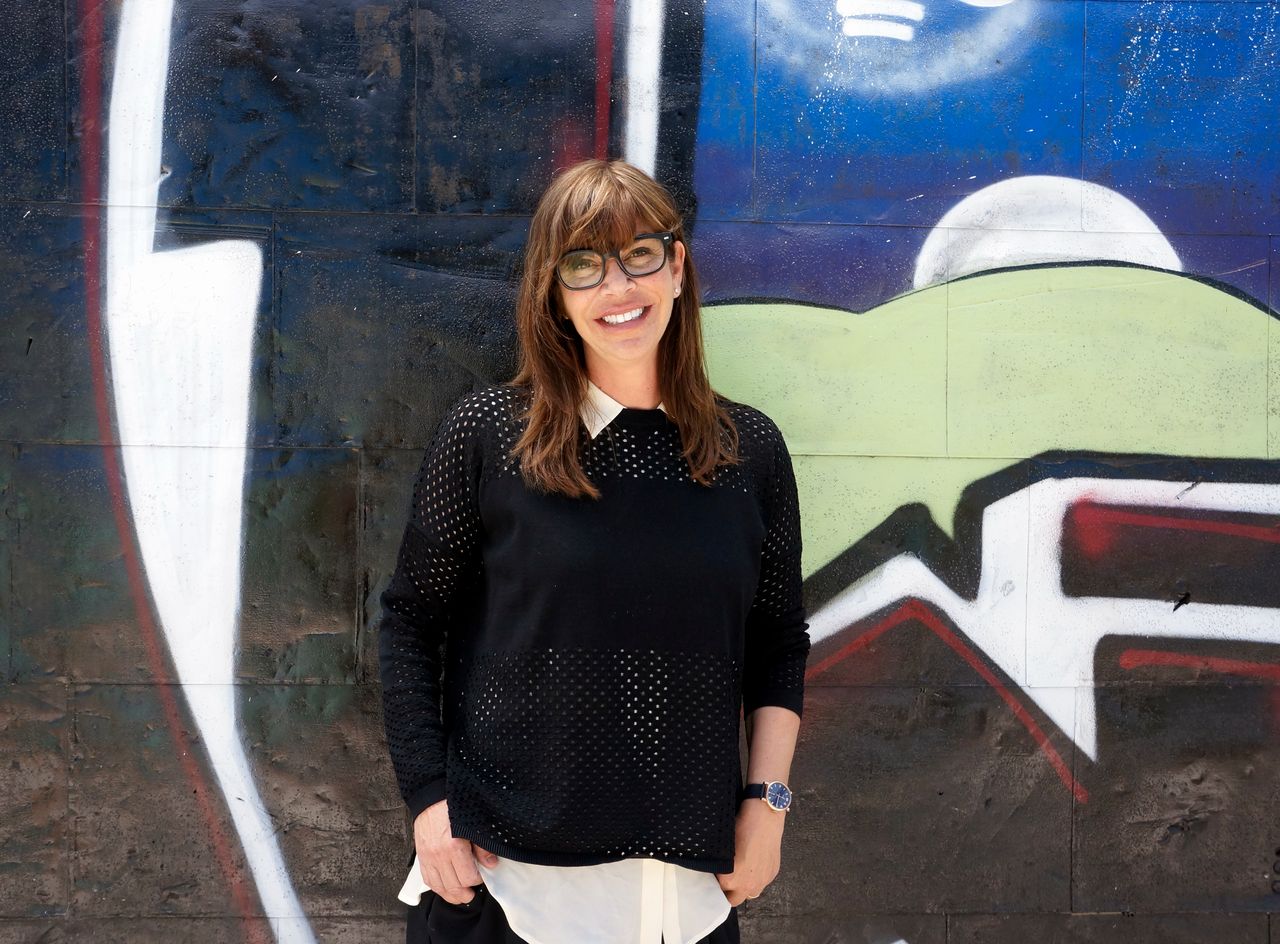 Eva Chimento outside of Chimento Contemporary in Boyle Heights. Image by Allie Pohl

AP: Chimento Contemporary opened its doors in 2015 on the gallery-filled street of south Anderson. The gallery focuses on mid-career LA-based artists with a few emerging and international artists mixed in. Eva has worked in the arts in Los Angeles for 24 years. The gallery is slightly off the beaten path, located in the back of a warehouse with a fruitfully graffiti-covered backyard. 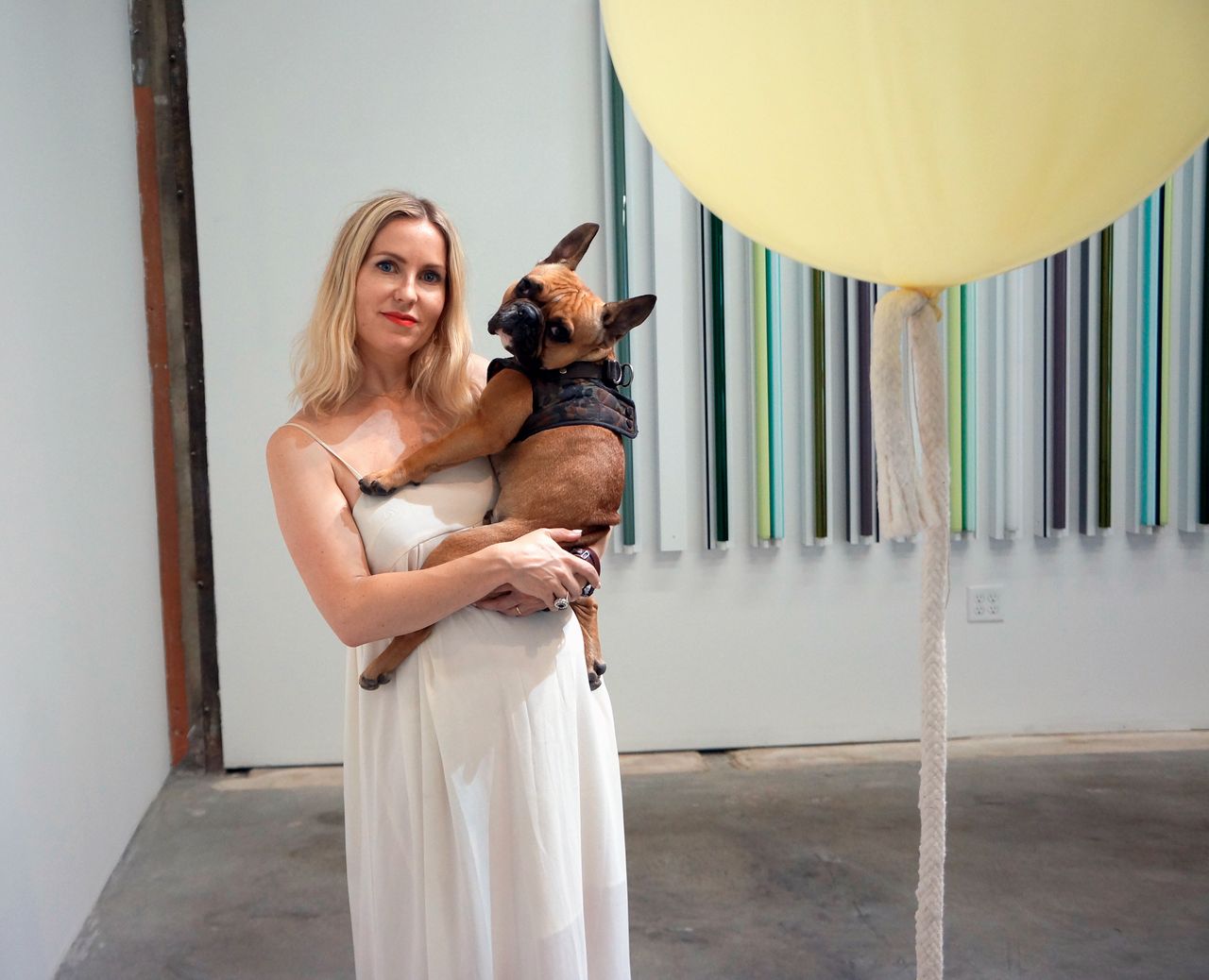 Harmony Murphy and Moses with works by Kathryn O'Halloran and Robert Irwin at her DTLA gallery. Image by Allie Pohl

AP: Harmony Murphy is located near the Geffen Contemporary at MOCA in Little Tokyo. Harmony opened her own gallery doors in 2014. Previously, Harmony was the curator at Pace Gallery and the curatorial director of L & M Venice. Murphy presents an array of emerging and established international contemporary artists. She also has the cutest dog, Moses, who will surely greet you with a sweet hello! 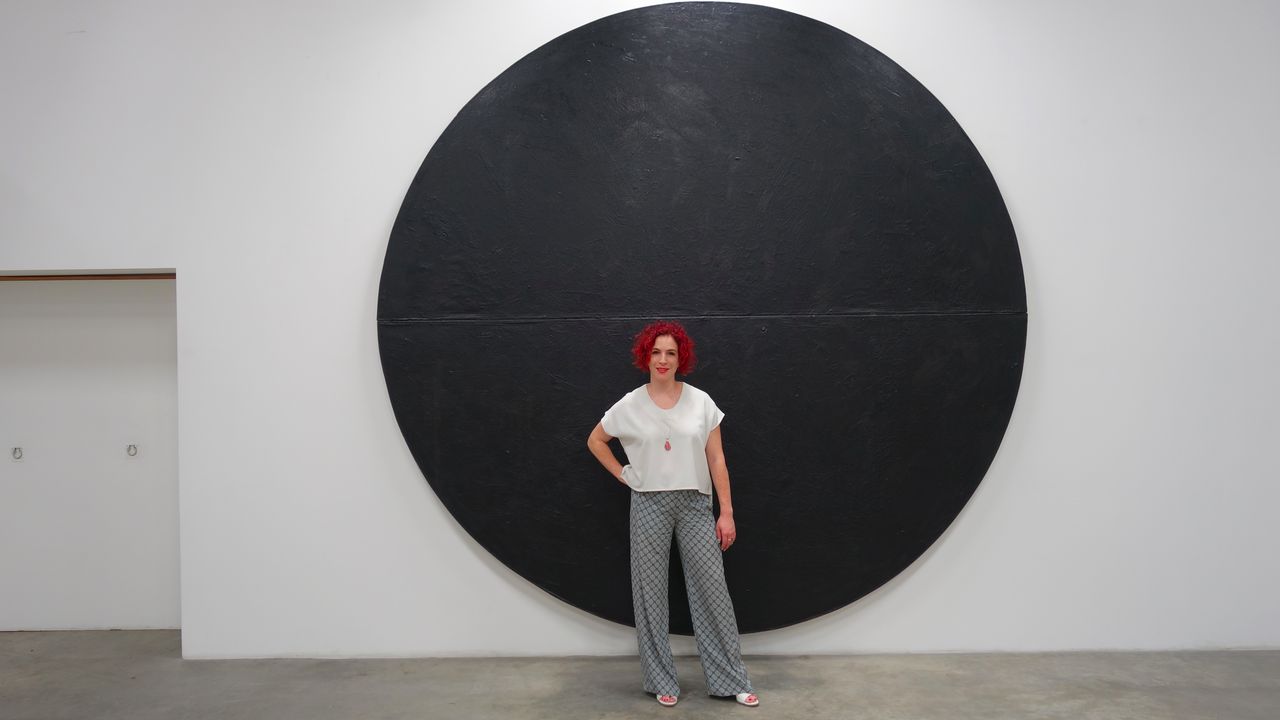 Mara McCarthy with a work by Wally Hedrick in DTLA. Image by Jason Underhill courtesy of The Box

AP: Mara McCarthy is the principal and curator of The BOX Gallery, located in the DTLA Arts District. Since opening in 2007, The BOX’s mission has been to create a diverse art program surveying historical artists and their contemporaries. Their artists cover a span of nearly five decades— the past generations provide a historical basis in which to contextualize the expansive development of art today. Mara believes in supporting artists who have been unsupported and forgotten. 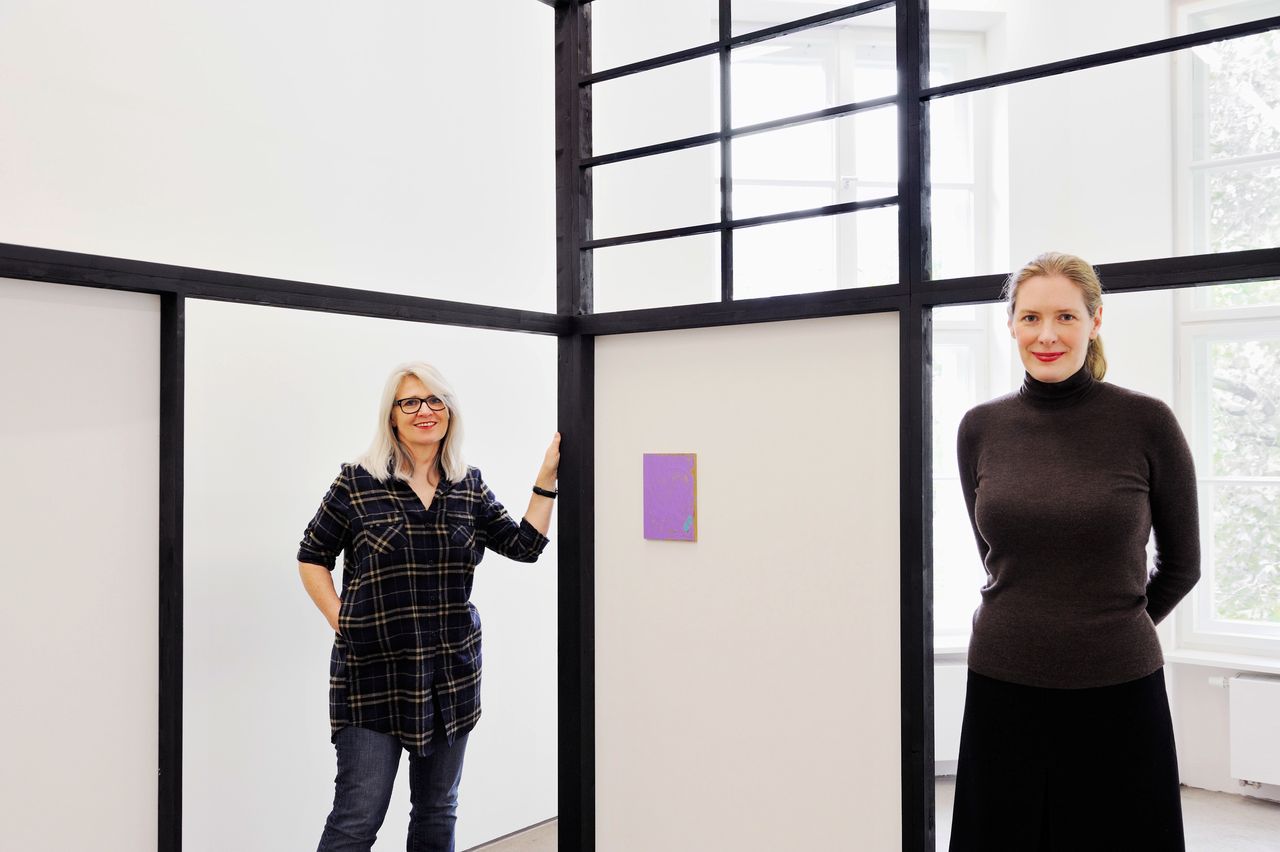 AP: Monika Sprüth and Philomene Magers are two feminist gallerists who have helped pave the way for some of my favorite female artists. Adding to their London and Berlin galleries, Sprüth Magers recently opened new doors across from Los Angeles County Museum of Art. Los Angeles is truly lucky to have these two women’s program! 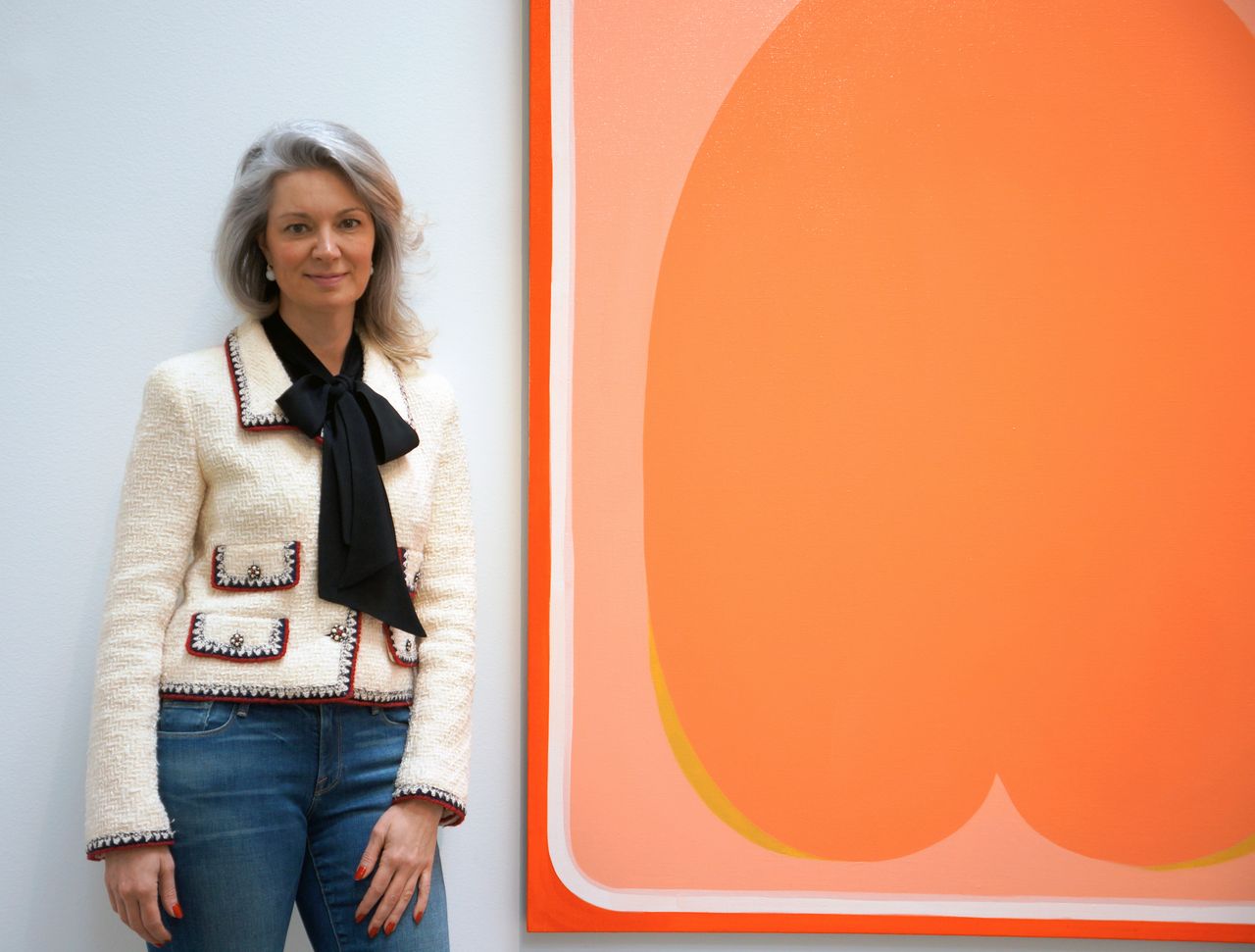 Sarah Gavlak with a work by Lily Stockman at her gallery in Hollywood. Image by Allie Pohl

AP: Gavlak is located close to several other museum-like galleries. Sarah Gavlak is a contemporary art dealer with galleries in both Hollywood (2015) and Palm Beach, Florida (2005). She represents an international roster of emerging, mid-career, and established artists, with a strong emphasis on pioneering women and LGBT artists. 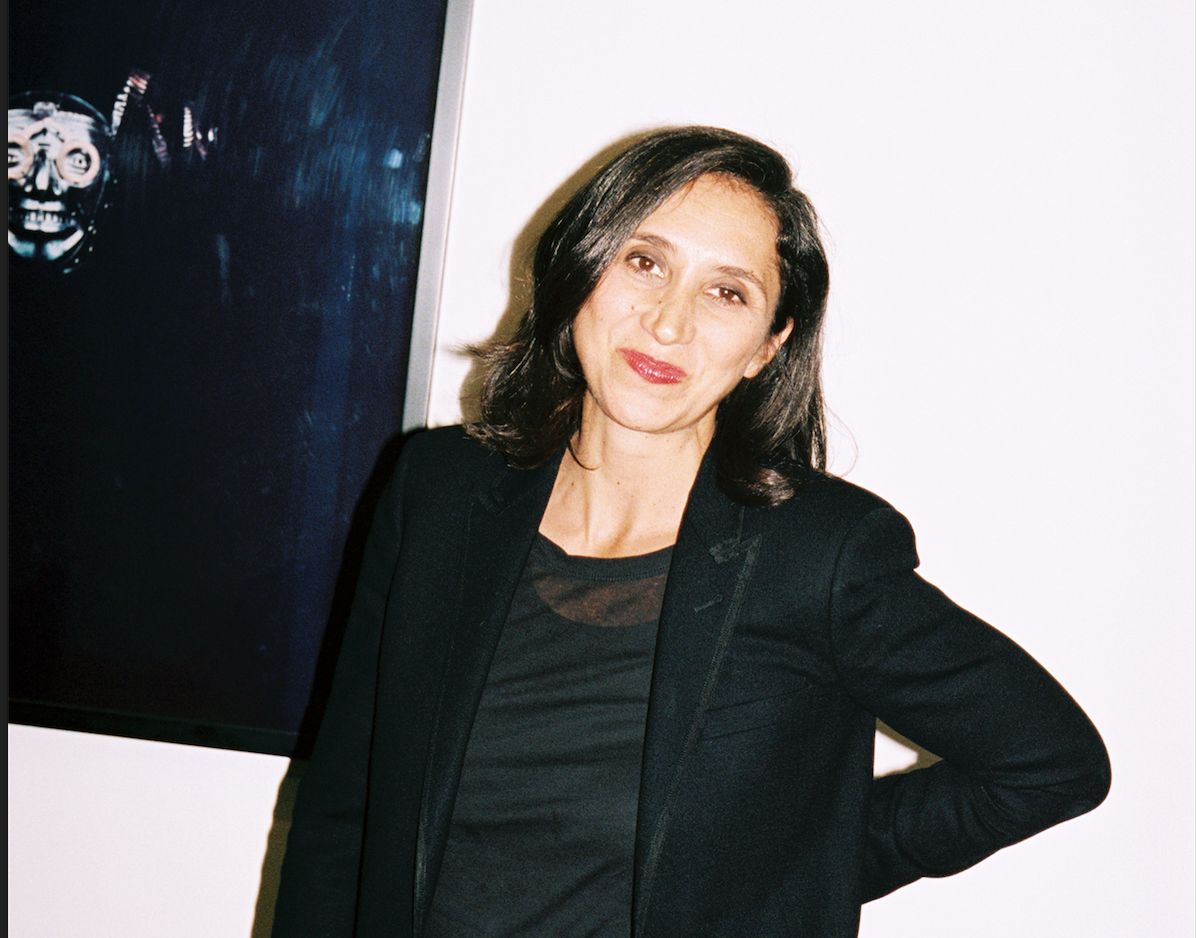 Michele Maccarone with a work by Sarah Charlesworth in her New York gallery. Image by Jason Nocito courtesy of Maccarone

AP: Maccarone was founded in 2001 in the West Village, New York. Now, Michele Maccarone has two New York City locations and a truly magnificent space in Los Angeles. This is a powerhouse gallery with a fantastic program located in the Arts District. 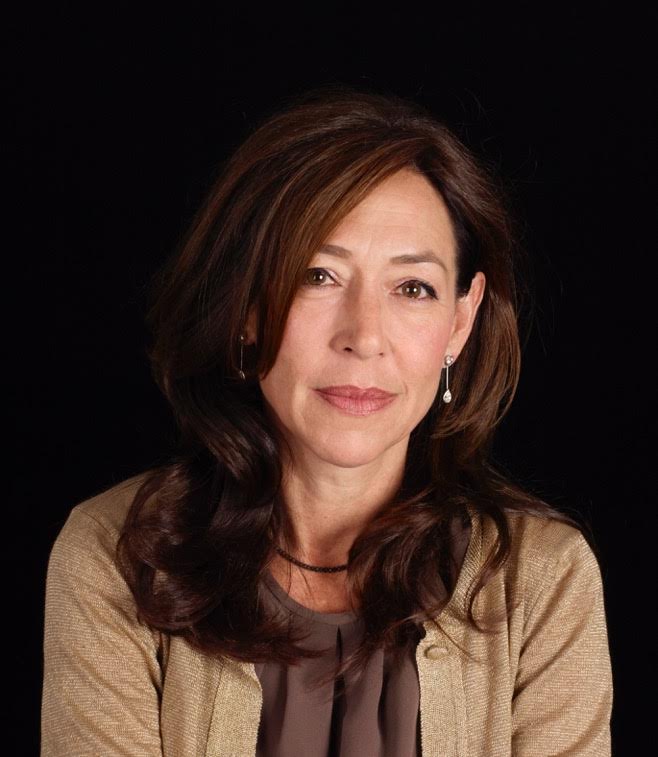 Shaun Regen opened Regen Projects in Hollywood in 2012, which has since become an artistic epicenter. Image by Catherine Opie courtesy of Regen Projects

AP: Regen Projects was founded in 1989 by Shaun and Stuart Regan. Stuart is the son of prominent New York art dealer Barbara Gladstone, who died in 1998. In 2012, Shaun opened a magnificent museum-like space in Hollywood for her museum quality artists, many of whom dwell in LA. Shaun has been quoted that she does not have a second-city chip on her shoulder—she is LA all the way!

Arden Shore is the associate editor at Citizine. When she's not on thesaurus.com, you can find her within the pristine white walls of Los Angeles' galleries ... or at the beach. Keep up with her on Instagram @ardyparty and Twitter @ardyparty_.
Header Image of Allie Pohl by Mark Hanauer