You both swiped right, and the next thing you know you’ve agreed to meet a total stranger in New York City. No pressure, but when you’re visiting a metropolis of virtually endless possibilities, there’s no excuse for a boring date. Maybe you have cash to burn while on vacation or you’re just looking for some good, cheap fun with someone who *fingers crossed* resembles their profile picture. Either way, these seven first date ideas will help you break the ice in a New York minute.
Central Park
Not every hopeless romantic can afford to wine and dine every virtual love interest. Pack some snacks and a flask with your favorite adult beverage and head to Central Park. At any given turn, you’ll stumble upon fountains, gardens, boats, ponds, waterfalls, castles, carousels, bridges; It’s like a damn Nicholas Sparks novel come to life. Strategically plan your stroll around sunset and fugetaboutit.
If it’s going well: Share a dessert (the most popular is the warm truffle cake with chocolate sorbet) at the Loeb Boathouse, the only lakeside venue in Manhattan. You might even catch couples out on the water in rented row boats, keeping that whole Nicholas Sparks theme going.
Tramway Plaza
With just a swipe of your MetroCard you can take a scenic tram ride to Roosevelt Island (yes, the same one M.J. dangled from in the first "Spider‐Man" movie). It might only be a five-minute trip but the views of the East River and Upper East Side skyline are definitely memorable. In an hour, you can walk the whole island or if you’re feeling particularly lazy, take the red bus across for 25 cents. Random attractions include a floating head statue of FDR, a giant Pepsi‐Cola sign and an abandoned smallpox hospital.
If it’s going well: When you land back in Manhattan, grab margaritas and some bacon guac at Maya. Unless you’re really trying to pay full price, you almost can’t miss its lengthy daily happy hour and reverse happy hour; you just have to score seats at the bar to take advantage.
Get Citizine Updates Here 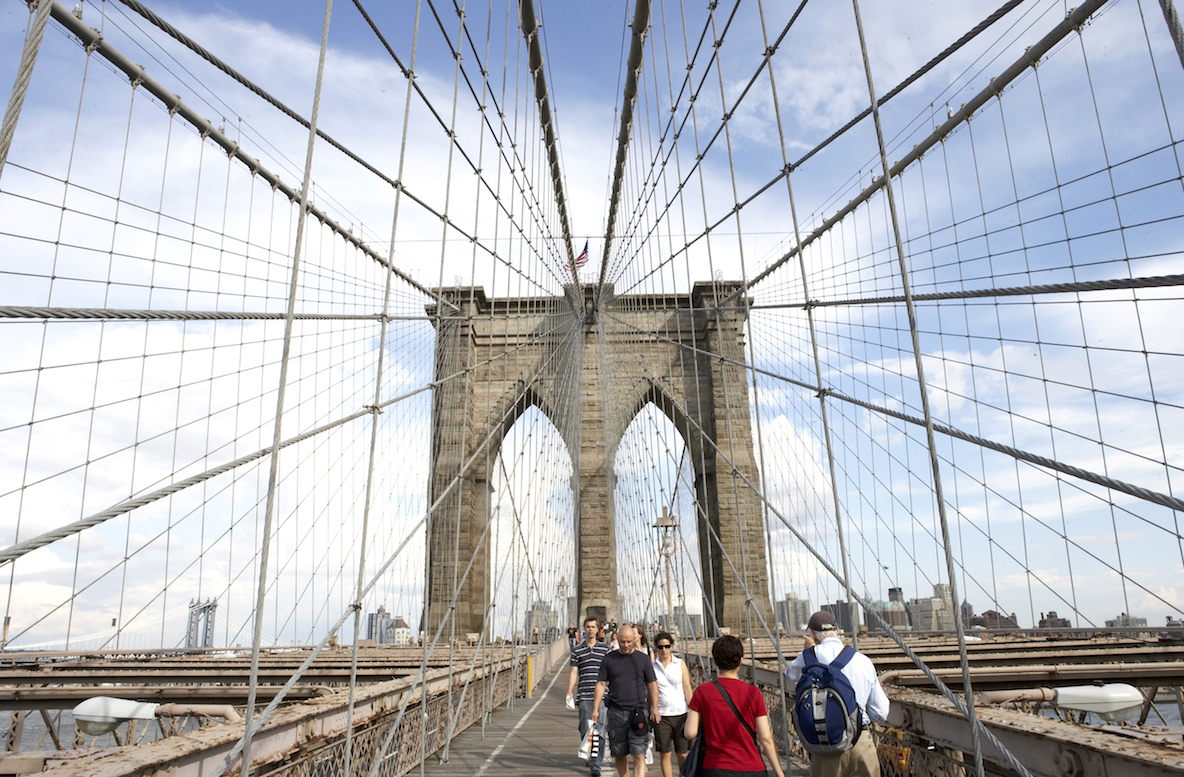 A walk along the Brooklyn Bridge can be a low-stress way to get to know your date. 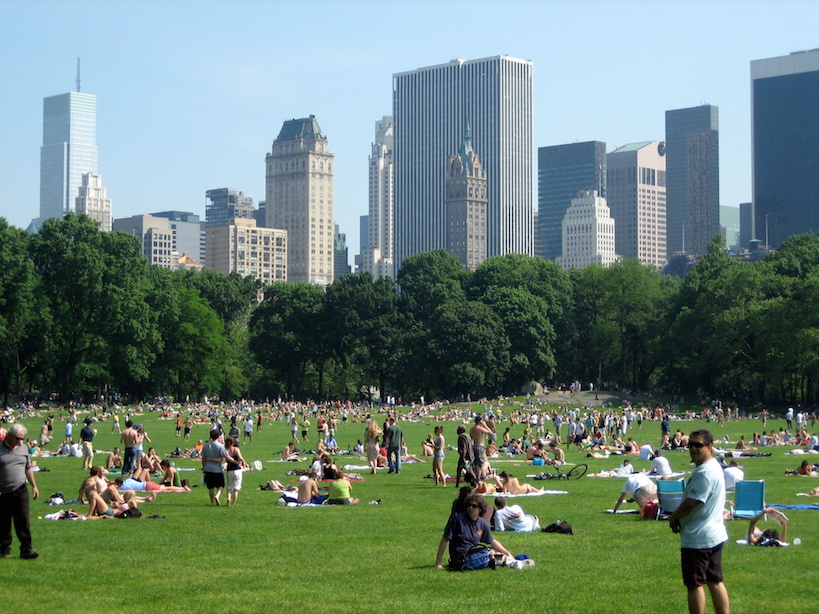 Live out your Nicolas Sparks fantasies in Central Park. 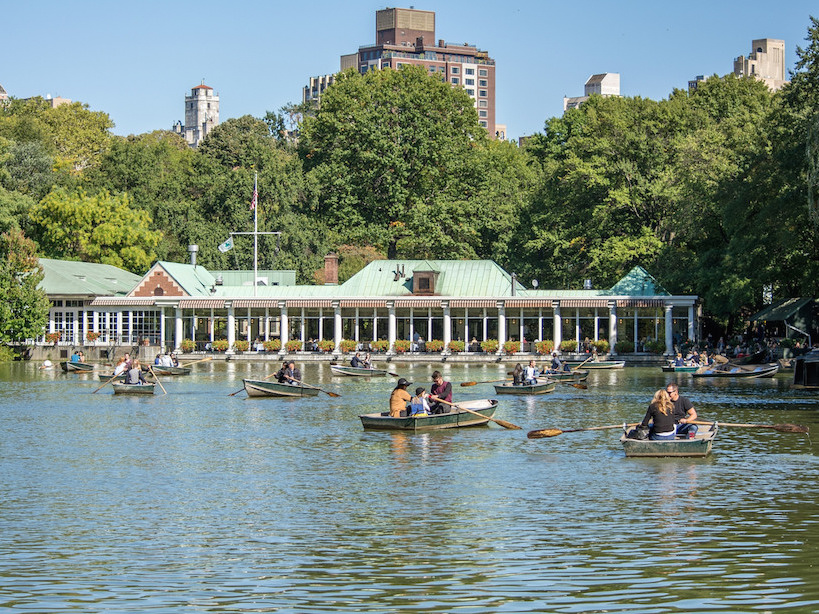 Rent a rowboat and reward yourself with a sorbet at The Loeb Boathouse Central Park.

Grand Central Terminal
A hidden stairway, a multi‐million dollar jewel in plain sight, a 35,000‐square‐foot blunder—you don’t have to be Sherlock Holmes to uncover the secrets hidden all around Grand Central Terminal. For $20, you can take a 75‐minute tour led by well-informed docents trained by The Municipal Art Society of New York. And here you thought Grand Central was where the homeless seek shelter and people shove you aside to make their train. OK, fine. It’s those things, too.
If it’s going well: Take the short staircase up to The Campbell Apartment, the former office of 1920’s finance mogul John W. Campbell. Signature cocktails go for $15 a pop, but they’re strong enough that if you invest in a couple, you may just think you went back in time. The intricate ceiling, dim lighting and live jazz help, too. Tip: Dress to impress. A millionaire’s salon is no place for baseball hats and sneakers.
MoMA
Any night is a great night to check out ambiguous artwork, but Fridays from 4 to 8 p.m. are particularly alluring now that MoMA offers free admission to all of its exhibitions. Is that a functioning fire extinguisher or a brilliant work of art? Who knows, but it’s certainly a conversation piece.
If it’s going well: Follow your nose to the scents wafting from The Halal Guys food cart. If you’re going to trust any street meat, this is it. Chicken or gyro meat is served with rice and topped with their own white sauce. Be prepared for a line. With food so good and portions so large, people have no problem waiting for it. 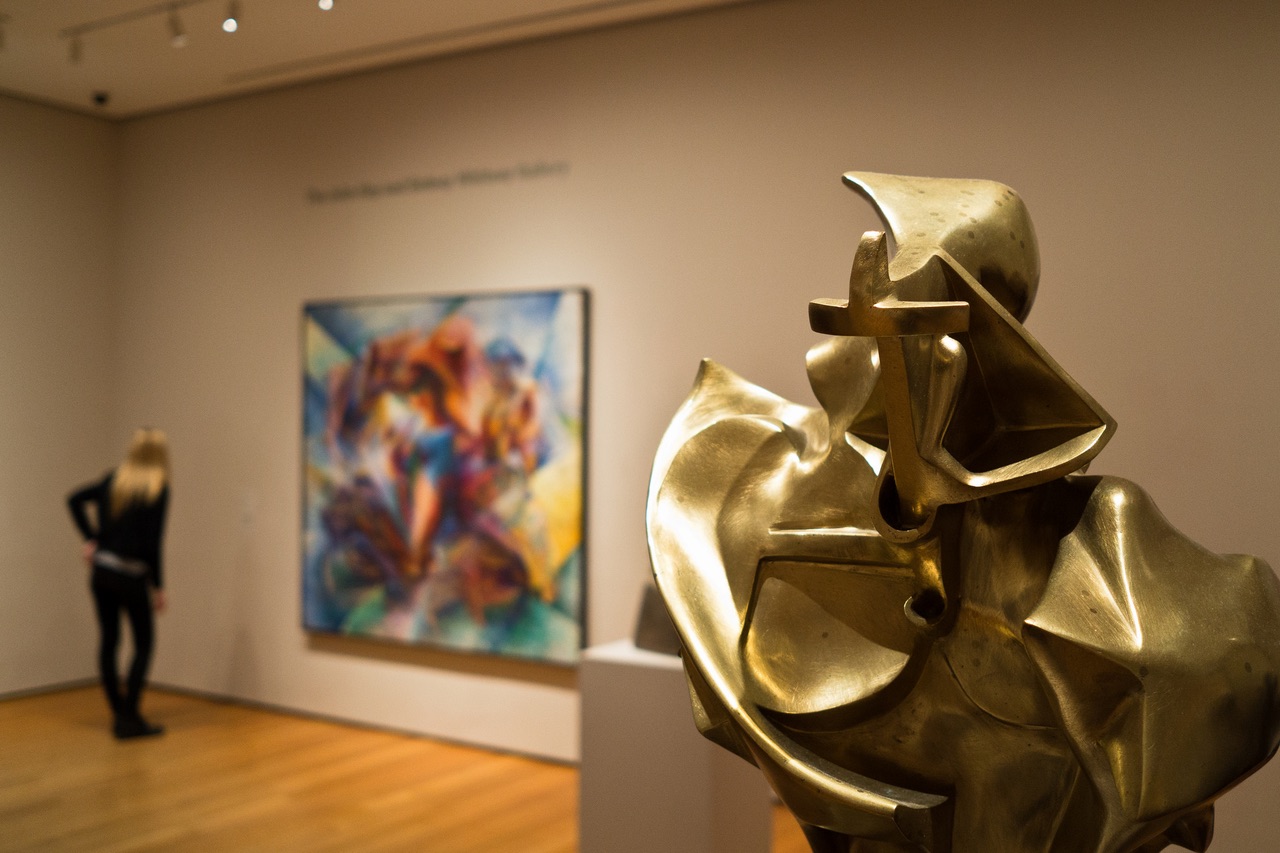 Impress your date with an encylodedic knowledge of Umberto Boccioni and other modernist masters at MoMA. 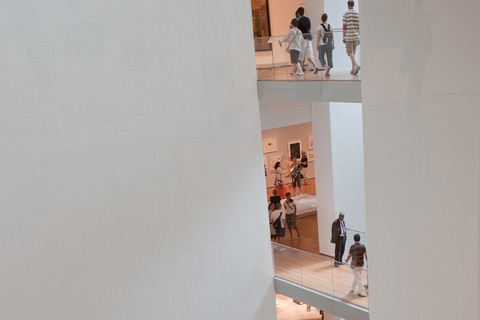 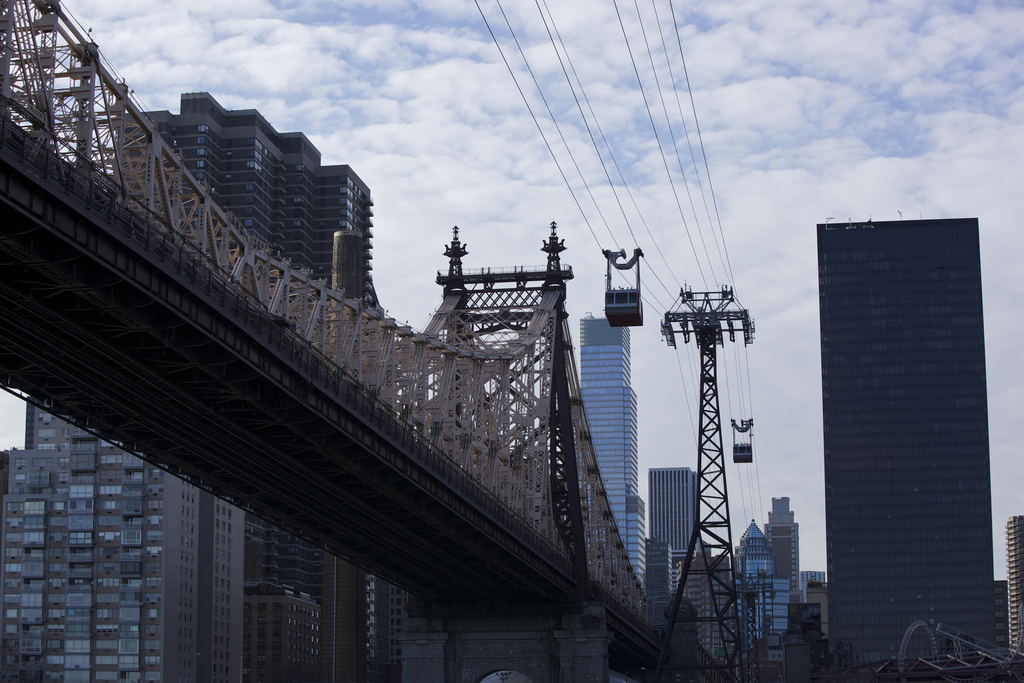 When Peter Parker can't catch the F train back to Queens, he sometimes settles for the Roosevelt Island Tram, especially when his girlfriend is kidnapped by the Green Goblin.

Get Citizine Updates Here
Barcade
Just when you thought you'd fallen completely out of touch with your prepubescent self, some hipsters came along and opened Barcade. Along the exposed brick walls are over 50 old school arcade games, most a quarter to play. You’ll reunite with the likes of Ms. Pac Man, Donkey Kong and the Teenage Mutant Ninja Turtles as you and your date compete for biggest nerd of the night. A bunch of locations have sprung up around the city, but the Williamsburg spot is the OG.
If it’s going well: Stick around Barcade and try a beer that you can’t get anywhere else. Their exclusive craft beers are created solely for their locations and available till the kegs are kicked. If you don’t consider Barcade’s offerings of beer nuts and beef jerky a well‐balanced meal, head to The Commodore for amazing comfort food. Two words: fried chicken.
The Brooklyn Bridge
Suspension cables above, cars below, the East River to the sides, walking across The Brooklyn Bridge may be one of the most mellow ways to spend time with someone you just met. Beware: Along this 1.1‐mile pedestrian walkway, even anti‐selfieites will have a hard time resisting the bridge’s architectural beauty. These are the moments Insta was made for. #Blessed
If it’s going well: Get in line at Grimaldi's, a New York pizza institution that uses a coal-burning oven to cook it's "secret recipe" dough to perfection. Or better yet, call in your order during the walk (the line has been known to wrap around the block). You can smirk at people waiting in the queue as you jump ahead to claim your piping-hot prize. Find a spot in nearby Brooklyn Bridge Park and chow down. Keep in mind: they only take cash and only serve whole pies. 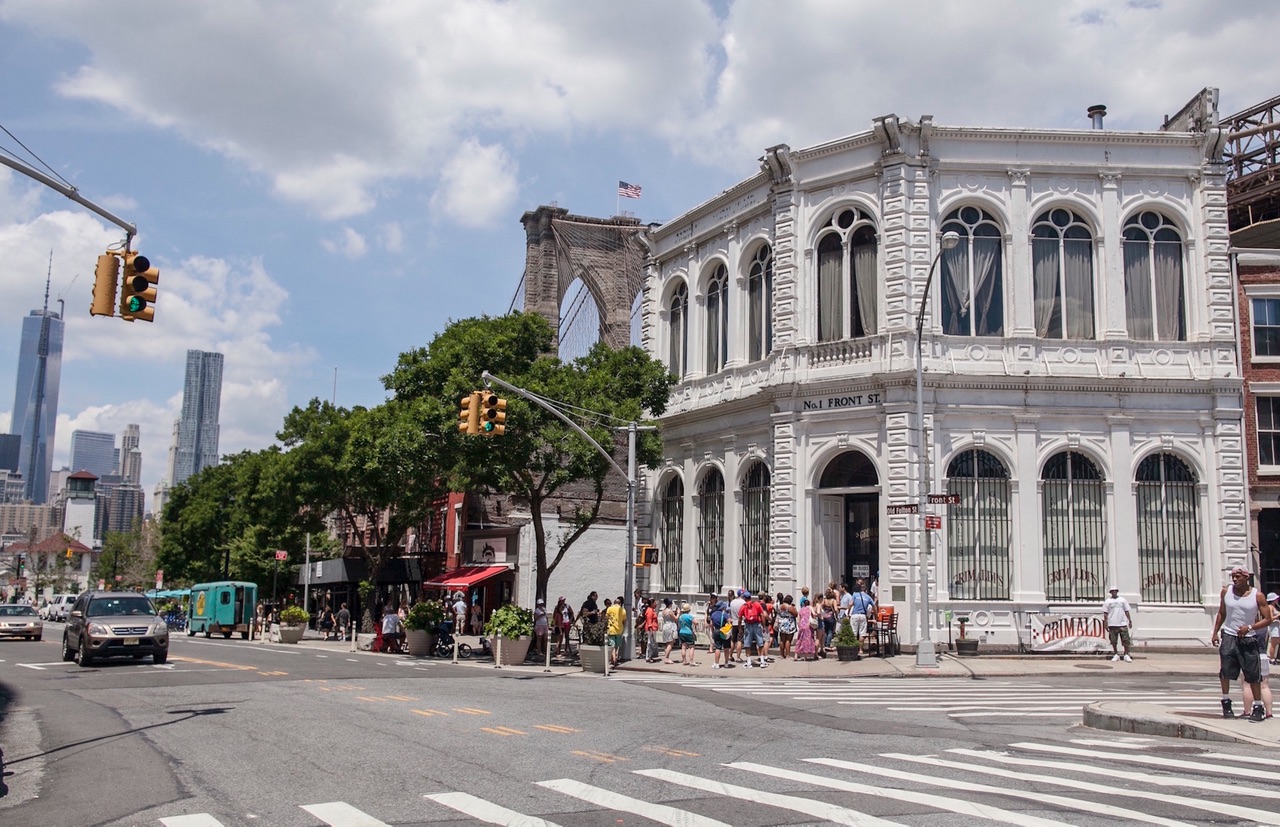 In New York, locals might judge you based on where you get a slice.  Don't worry: Grimaldi's will give you the street cred you deserve. 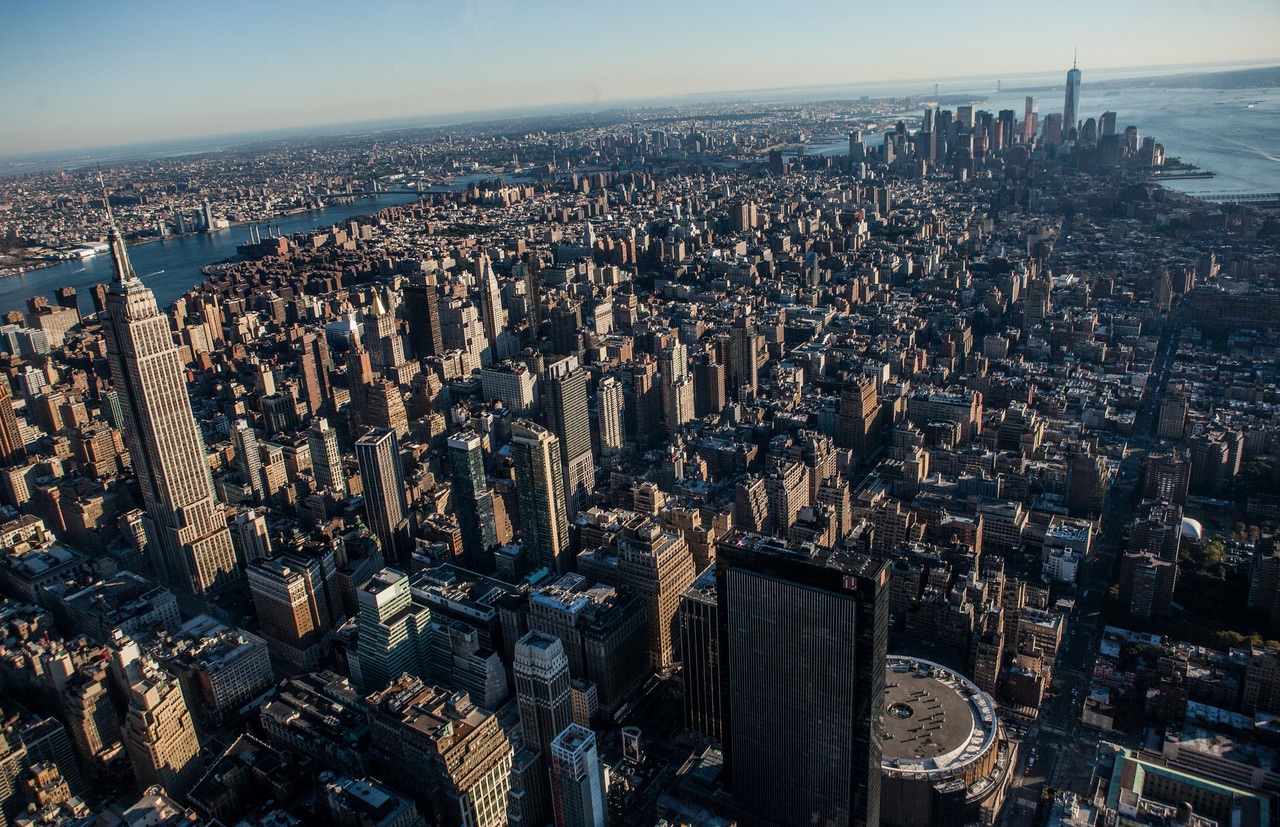 Get a bird's eye view of New York with a romantic helicopter tour of the metropolis. It's like a Woody Allen movie, from above.

Helicopter Tours NYC
Arguably the most efficient way to cram the most sights into a trip is to avoid the pesky crowds and take your new companion for a helicopter ride over Manhattan. New York Helicopter offers three tiers of tours covering at least 15 iconic landmarks in 30 minutes or less. Highlights include the Empire State Building, the Chrysler Building, the Statue of Liberty and the feeling that comes with planning one of the sickest first dates ever.
If it’s going well: Continue keeping it classy at the restaurant that pioneered the fine dining experience: Delmonico's. Vegetarians need not apply; the signature boneless ribeye is one big fat juicy reason this establishment has remained an epicurean icon since opening in 1837. Often imitated, never duplicated.

Tara Imperatore is a New York City-­based writer whose work has been featured in The Huffington Post, Thrillist and "Variety." Her lifelong passions include bacon, board games, banter and blatant alliteration.